Lunchtime Lecture: Steps Toward the Area Bombing Offensive — The Influence of the Butt Report and the Boulogne-Billancourt Raid on Policy Change

At 12.30PM on Friday 12 November, Dr Stephen Moore will explore the influence of the Butt Report and the Boulogne-Billancourt raid on the RAF’s move toward the area bombing offensive. This free lecture will be hosted in our Cosford lecture theatre with a live audience.

Circumstances permitting, the lecture will also be live-streamed online via Crowdcast. 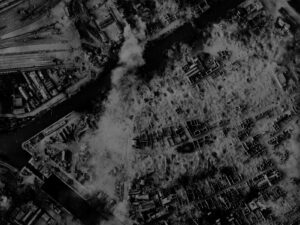 The publication of the Butt report in August 1941 was an unpleasant shock to the RAF. Positive raid evaluations and contemporary propaganda gave an optimistic picture of Bomber Command operations, so the inability of most aircraft to drop their bombs within five miles of the intended target prompted a re-evaluation of British bombing strategy.

The realisation that Bomber Command was incapable of hitting precision targets at night with the available technology marked ‘the end of a chapter in the history of Bomber Command’. Over the winter of 1941 the concept of concentrating aircraft over a city as a nominal target was developed, on the grounds that the majority of bombs dropped would still hit something instead of landing in open countryside, which became official policy when the Area Bombing Directive was issued in February 1942.

The raid on the Renault factory at Boulogne-Billancourt in the suburbs of Paris on 3 March 1942 marked the beginning of the new area bombing policy and was the largest bombing raid by the RAF up to this date. The operational restrictions — which reflected France’s status as a defeated ally rather than a belligerent enemy — limited the scale of this attack, but the RAF had finally caught up with the Luftwaffe in the provision of radio navigation blind bombing aids during the winter of 1941 which led to an indecisive series of raids against industrial targets in the Ruhr valley.

Operations against other targets escalated and Bomber Command continued their experimental tactics with an attack at Lübeck on 28/29 March using incendiaries. Although repeated attacks against the same objective had been previously explored by Bomber Command, these were unsuccessful until the four raids on Rostock between 23 and 26 April, which established RAF area bombing policy for the remainder of the offensive.

The lecture will take place in our Cosford lecture theatre on Friday 12 November 2021. This lecture will begin at 12.30PM.

Stephen Moore is a twentieth century conflict historian and is currently an Air Power ECR and a post-graduate teaching assistant at Newcastle University. His thesis entitled “After the Blitz: Luftwaffe Operations over the United Kingdom and the Development of the Defence systems: May 1941 to December 1943”, was completed in 2019. This study examined the continuing operations of the Luftwaffe and challenged the conventional view that subsequent attacks on the UK were insignificant.

His research interests include the development of strategic bombing, the experience of civilians on the home front under bombing, aircrew training, the air defence of the UK, particularly the Battle of Britain and night air defence, RAF operations during the Second World War, especially the area bombing campaign and Transportation Plan, and the military application of scientific developments such as the establishment of British radar network, command and control systems, development of airborne radar, Ground Control Interception, including mobile systems for the Normandy invasion.

He is currently researching a new history of the Battle of Britain, which will draw on different perspectives to present a familiar story in a distinct way.

You can find further details about Stephen online* at: s.moore@newcastle.ac.uk Twitter: @smooreBofB1940

*All links to external websites are provided for informational purposes only; they do not constitute an endorsement or an approval by the RAF Museum of any of the products, services or opinions of the individual. The RAF Museum bears no responsibility for the accuracy, legality or content of these sites.