It’s The National Lottery’s 25th Birthday and we’d love you to join in the celebrations!

National Lottery have been instrumental in their help to develop our new exhibitions and have given us over the years some prestigious awards. Back in 2015, the London’s First World War in the Air exhibition was named the UK’s Best Heritage project in that year’s National Lottery Awards – the annual search to find the UK’s favourite Lottery funded projects.

Last year’s Centenary Programme simply would not have been possible without the support of the National Lottery and the Heritage Lottery Fund. Especially its Phase 2b ‘Historic Hendon’ which focused on sharing the historical significance of the Museum’s London site as the London Aerodrome in the early 20th century and later RAF Hendon, received nearly £1.8million from the National Lottery. It allowed the landscape at the heart of the site to be transformed to create a ‘sense of place’ linked to that heritage. Maggie Appleton, CEO of the Royal Air Force Museum, said: “We’re incredibly grateful to HLF for the support they have given us. Our collection is all the more significant because the RAF Museum London stands on a historic site – one which is woven into the narrative of British Aviation.”

And obviously, it is not only the RAF Museum which has benefited from the support of the National Lottery. Since The National Lottery’s first draw took place on 19 November 1994, more than £40 billion has been raised for good causes in the areas of arts, sport, heritage and community. 94 of the top 100 most-visited tourist attractions in the UK – from Stonehenge and the Tower of London, to Edinburgh Zoo and Shakespeare’s Globe have received National Lottery funding. These locations attract almost 110.3 million visits each year and are a major contributor to the UK economy.

But ultimately, it is the National Lottery players who made all of this possible! To thank National Lottery players for their support, the RAF Museum is offering half price tickets to its 4D Experience between 23 November and 1 December. If you have ever wondered what it actually feels to soar amongst the clouds or to participate an intense aerial battle wonder no more, you can experience all the thrills and exhilaration of powered flight by entering the Museum’s newest attraction – our 4 Dimensional Theatre. Players just need to present a National Lottery ticket or scratch card at the Box Office. A ticket normally costs £5 per person for each film, but will now be £5 per 2 persons! 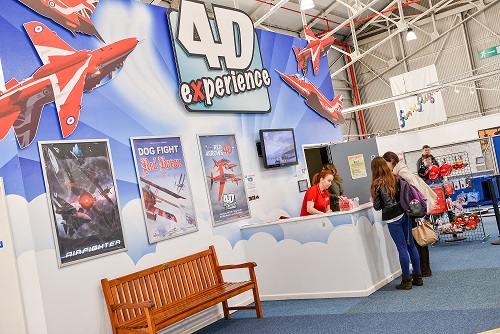