Showpiece RAF100 event scheduled for 1pm on 10 July in London. 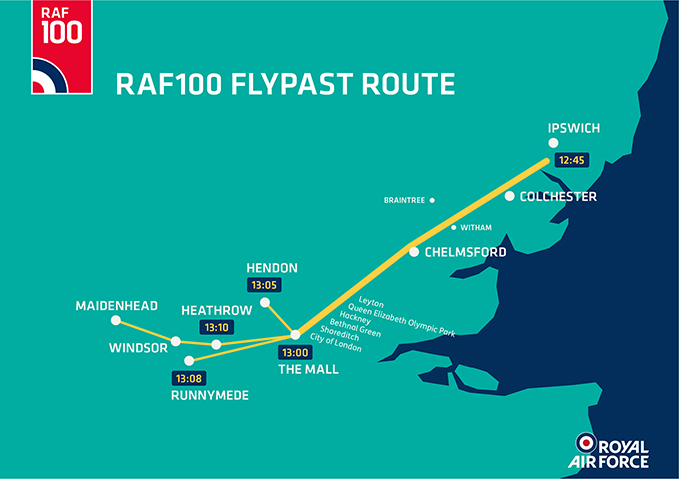 On 10 July, up to 100 RAF aircraft will perform a flypast on an epic scale over Central London to mark the centrepiece of the Royal Air Force’s 100th anniversary celebrations. Historic aircraft, including Spitfires, will join some of the RAF’s most state-of-the-art aircraft in this unique event.
This flypast will be the largest concentration of military aircraft seen over the capital in recent memory, with the formation passing over Buckingham Palace at 1pm BST*.

The mass display will feature a range of aircraft, marking different eras of the RAF’s 100-year service history, and will include the first opportunity for the general public to see the RAF’s next generation aircraft, the Lightning (to be confirmed).

Ahead of the flypast itself there will be a parade of 1,000 RAF personnel and another 300 lining the route, representing the diverse roles played within the RAF through the generations. The parade will start at 11:25, marching up Horse Guards Road and The Mall towards the Palace.

The planned events mark 100 days since the 1 April anniversary of the formation of the Royal Air Force and there will be a number of free ways for the public to get involved with this iconic event:

• Visit the RAF100 Aircraft Tour on Horse Guards Parade between 6-9 July for the opportunity to view and film an exhibition of aircraft covering the RAF’s history, from WW1 and WW2 through to the modern age
• Watch live coverage on the BBC or stream on BBC iPlayer to watch the events as they unfold live
• Spot the aircraft as they fly over Central London and surrounding areas – see route map for more details

“This once-in-a-lifetime flypast will provide an iconic centrepiece for the RAF100 celebrations. In our centenary year we are commemorating those that have come before us, celebrating our current personnel and, ultimately, inspiring a new generation to write the next chapters in the RAF’s story.

“While the aircraft in the skies on July 10 will offer a striking visual representation of the United Kingdom’s air power throughout the RAF’s existence, it is also important to remember that there is a large and multi-skilled team behind every aircraft participating. The complex preparations required to deliver this display are made possible by the RAF’s cutting-edge technology and ongoing spirit of relentless innovation.” 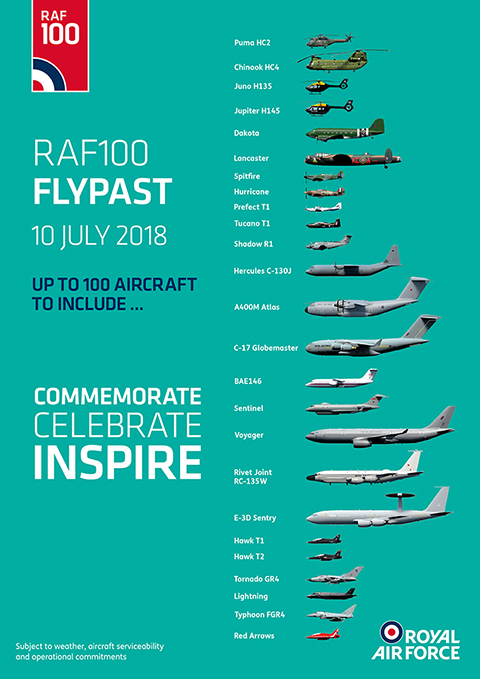