The Isle of Man post-office has recently released a set of stamps specifically to commemorate the RAF’s Centenary. We’ve teamed up with them to give away 20 First Day Covers.

If you would like to receive a set, all that you have to do is to post either on our Facebook page, or our Instagram page or to our Twitter Stream (@RAFMuseum) a picture of yourself next to your favourite RAF Museum aircraft using the hashtag #raf100stamps.

The 20 people who come up with the most striking images in the opinion of a panel of judges will receive a set of First Day Covers each. This competition ends midnight on Sunday 25 February. Good Luck. 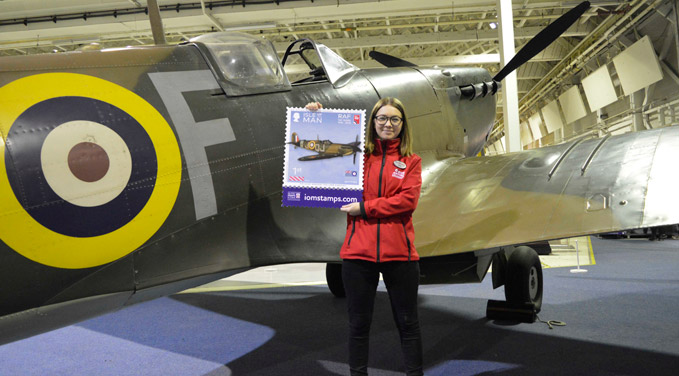 If you would like to own your own set of commemorative First Day Covers, they may be purchased now.

1) Only one entry per household.

2) The competition is open to residents of the U.K mainland only.

3) All entries have to be received via email no later than midnight Sunday 25 February 2018 Greenwich Meantime. All entries received after this time will not be entered into the competition.

4) The winner will be judged by a panel of staff on Tuesday 27 February.

5) The winners will be informed via direct message of their success by Thursday 1 March 2018. In order to ensure that the competition is deemed to be fair by entering this competition, the winner agrees that their name and town of residence will be published on the museum’s website, social media and will be used any subsequent publicity.

6) If the prize is not claimed within 21 days of notification, another prize winner will be drawn and the original prize winner forfeits the prize.

8) The Promoter’s decision is final and in the event of a dispute, no correspondence will be entered into.

11) The competition is being run, promoted and fulfilled by Promoter and no other party is in any way a sponsor or promoter of, or responsible for any obligations in connection with, the competition.