The Royal Air Force Museum is proud to announce that its ‘RAF Centenary Anthology 1918 – 2018’ published in partnership with Extraordinary Editions has won the Best British Book category at the British Book Design and Production Awards 2018. Exemplifying the highest standards of book design, production and printing, this annual award is given only to the publication judged to be the best of all books published, printed, designed and bound in Great Britain.

Citing their reason for the award the judging panel stated: ‘This stunning leather-bound book stood out from the crowd due to its beautiful inlaid leather with exceptional foiling and blind tooling to every part of the cover. Every page has been sympathetically reproduced and expertly printed preserving the essence of the original document. It is a great British book for a great British institution.’ 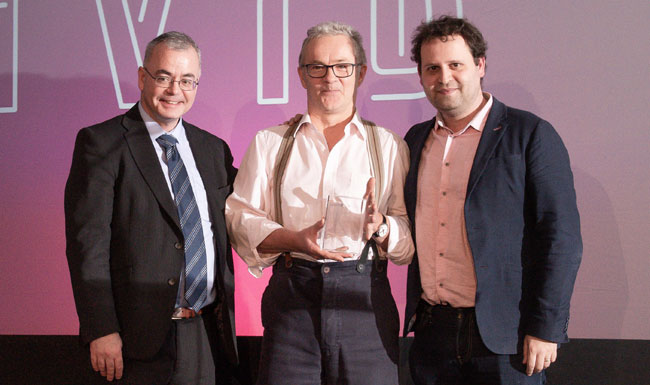 ‘Extraordinary Editions are especially proud to be awarded Best British Book for the RAF Centenary Anthology. We set out to create a publication that both commemorated and celebrated a great British institution and that was a fitting tribute to the RAF’s Centenary. The award is also testimony to the incredible amount of hard work and support we received from across the RAF family, especially our colleagues at the RAF Museum London and the Air Historical Branch.’ 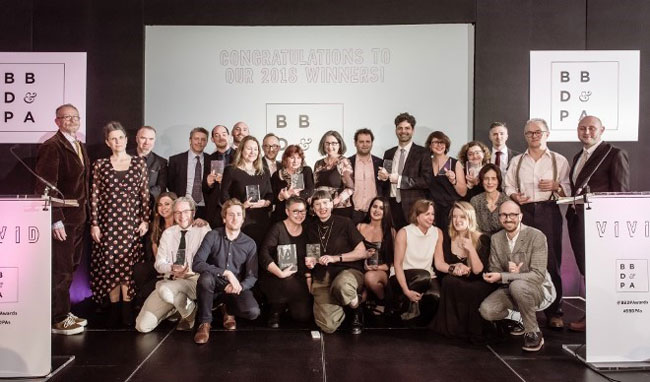 ‘We have been delighted to work in partnership with Extraordinary Editions to produce this unique volume, commemorating and celebrating the RAF’s Centenary. The combination of material carefully selected from the archives of the Museum and Air Historical Branch with the thoughtful design and wonderful craftsmanship from Martin and his team, has delivered an exceptional publication.’

The RAF Commemorative Anthology consists of 650 pages of documents, orders, operational reports, maps, air diagrams, diaries, letters and ephemera, recording RAF life over its first 100 years. It measures an impressive 39 x 27 cm, so that original documentation can be reproduced at full size.

From General Smut’s memorandum on the need for an air force to the latest air actions, the book presents both a history of the Service and a series of fascinating glimpses into RAF life, operations and policy. Among the many extraordinary documents included in the book are the leaflet dropped over German lines telling them of Von Richthofen’s death, the tragic last written note from Arthur Aaron VC and the secret clandestine letters from an imprisoned Douglas Bader. 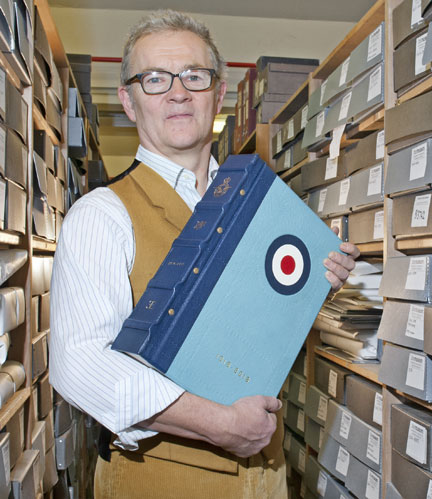 All the documents and images have been scanned at ultra-high resolution to ensure the best possible reproduction and each book is printed on a specially made, acid free, archival quality paper. Each chapter has a specially written introduction and extensive footnotes throughout to guide the reader.

The Centenary Edition is hand bound on brass posts in quarter leather over reinforced boards, with a book cloth cover depicting the roundel and a pattern of rivets reminiscent of a wing section. Each copy will come in a die cut slip-case revealing the roundel. Only 1,250 copies of this limited-edition anthology will be produced at a RRP of £950.00, which may be paid for in instalments. 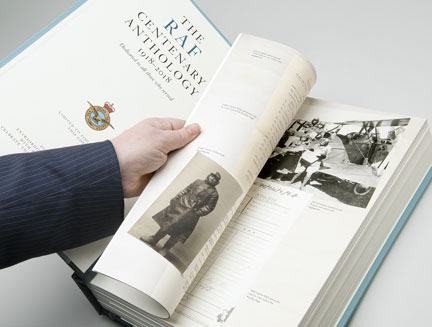 A further Signed Exemplary Edition is also available, limited to just 250 copies published in five different versions, each representing an iconic aircraft and signed by three pilots or crew from that aircraft: the Spitfire, the Lancaster, the Vulcan, the Harrier and the Tornado. Each Signed Exemplary Edition contains extra material about its linked aircraft drawn from the RAF Museum’s archive.

For more information about RAF Centenary Anthology 1918- 2018 and to enquire about purchasing a copy please email mm@extraordinaryeditions.com or telephone:020 7267 4547