The role of ‘Lawrence of Arabia’ in the Arab Revolt is arguably the most well-known aspect of the Middle East theatre during the First World War. Beyond the celebrity of TE Lawrence, thousands of Royal Flying Corps and later Royal Air Force personnel served in the Sinai and Palestine campaign. These men included Air Mechanic 3rd Class (A Mech 3) John Roscoe, an ordinary RAF mechanic for whom serving in Egypt was a completely new experience.

The RAF Museum Archive holds a collection of letters written by A Mech 3 John Roscoe to his family, one of which is featured in our ‘Letters Home trail’ event. In it, he describes Christmas Eve 1918 at the Government Hospital, Suez in Egypt:
“…I am staying in dock for Christmas, which is just as well. A tree has been fitted up in the yard, and electric lights arranged on it, while every night for the last week I have heard the staff and some of the patients [are] downstairs singing Christmas carols. I suppose they intend to come [a]round and Xmas waits. The music is mostly provided by the gramophone!” 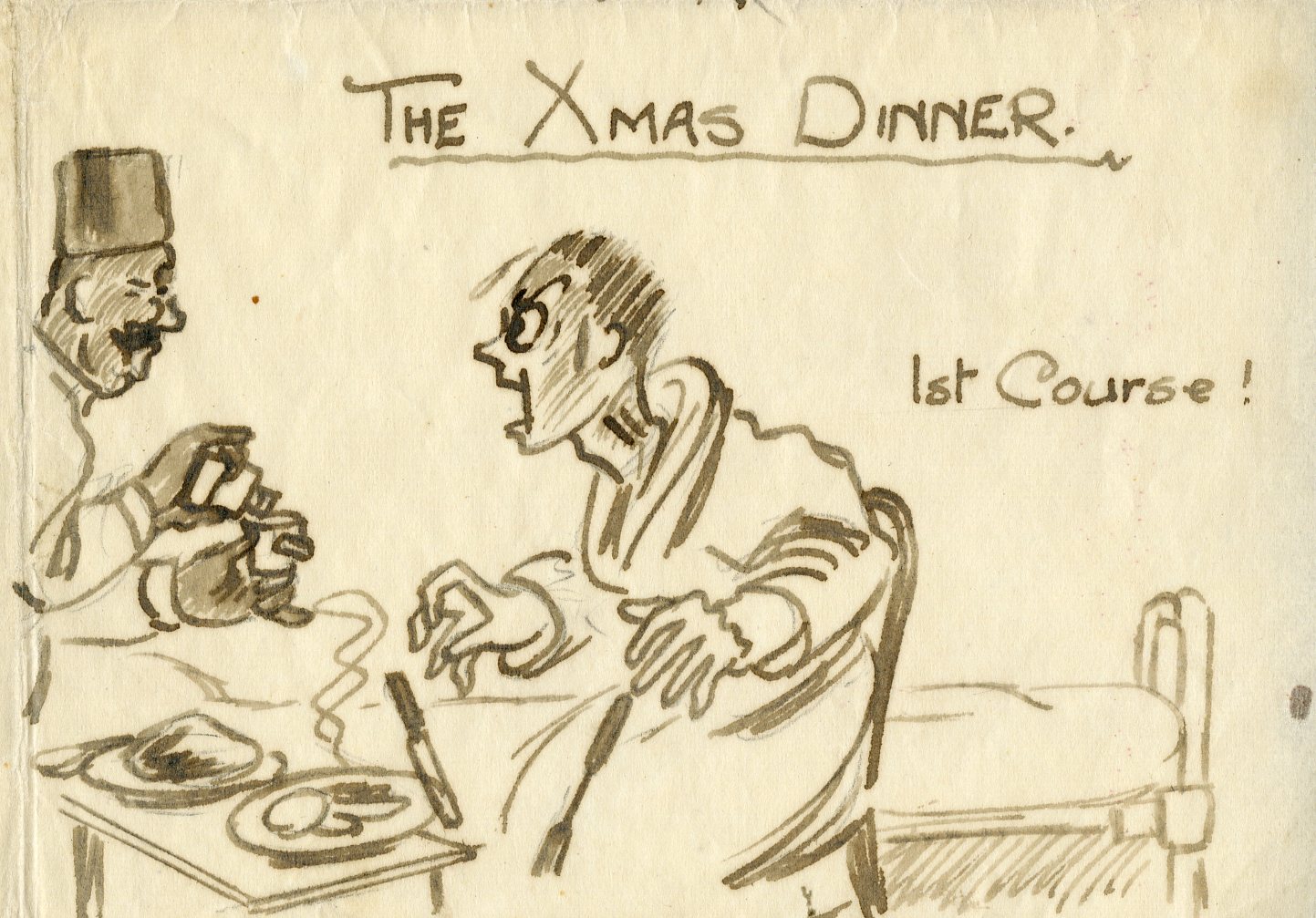 An Apprentice Fitter in civilian life, John was conscripted into the Royal Flying Corps on 4 February 1918 at the age of 20 years and eight months. His rank was Air Mechanic 2nd Class, reclassified to Air Mechanic 3rd Class at the establishment of the Royal Air Force on 1 April 1918.

A Mech 3 Roscoe’s service began with initial training in aircraft and engine fitting at Halton Camp in Buckinghamshire. There the men were accommodated in overcrowded conditions, enabling the spread of infectious diseases. After being treated in separate compounds, disease-ridden recruits had to be vaccinated and isolated for a period before being posted. John described his experiences of the daily routine at Halton:
“This afternoon we were all fumigated again, walking into a large room with steam jets spraying disinfectant all round. The mist thus caused was very dense, & we had to remain in it for about 5 minutes. We have to wander round in the mist with tunics unbuttoned, shirts open at the neck, & caps off. We come out soaked and sneezing & with blackened brasswork”. 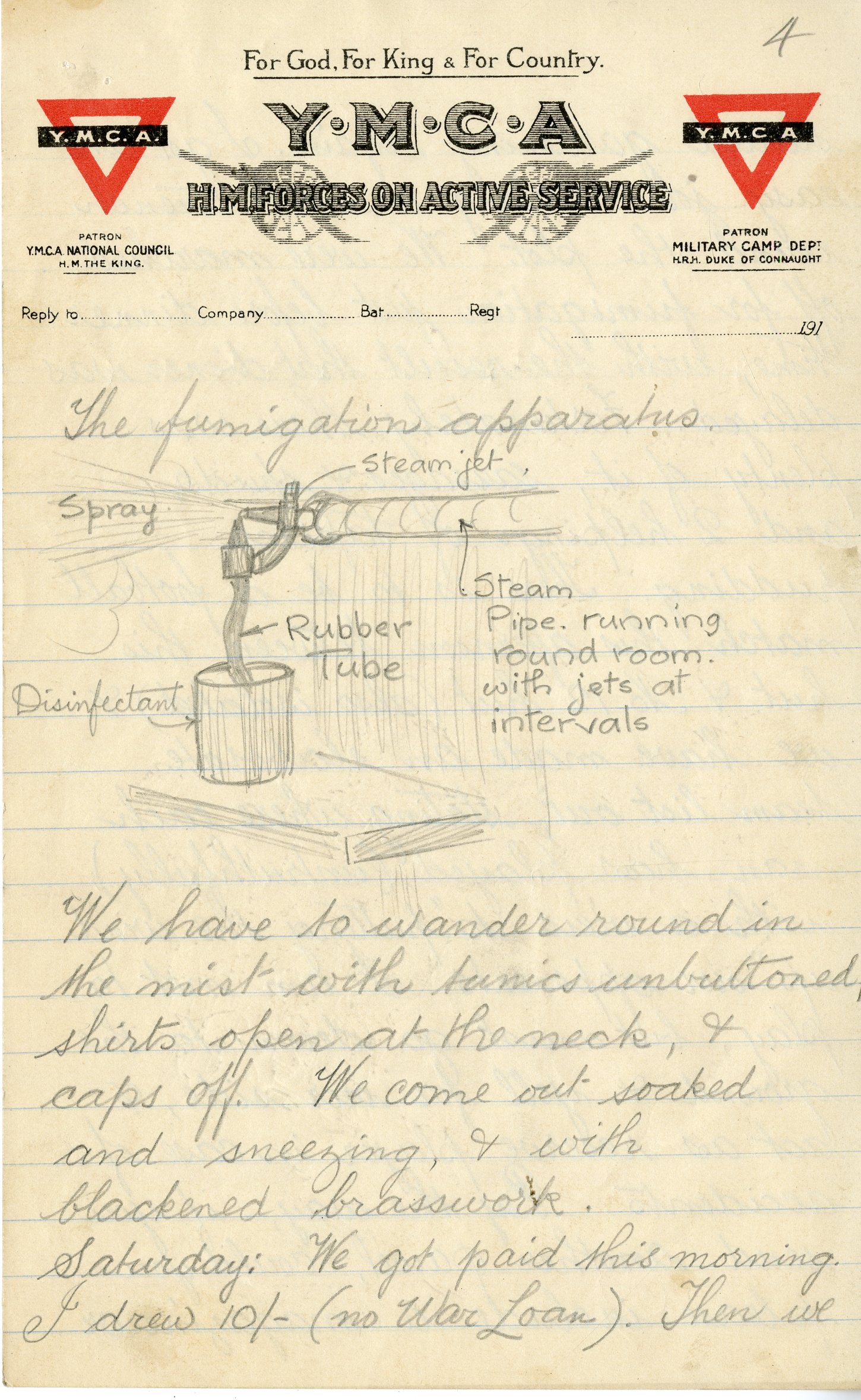 A few months later, A Mech 3 Roscoe travelled thousands of miles overseas to Egypt. One historic feat puts this distance into perspective. On 28 July 1918, Brigadier General Amyas Eden Borton, commander of the Palestine Brigade, and Major Archibald Mclaren made the first flight from Great Britain to Egypt in a Handley Page O/400. They arrived after 11 days on 8 August 1918, but a serviceman’s journey by sea would have been much longer. 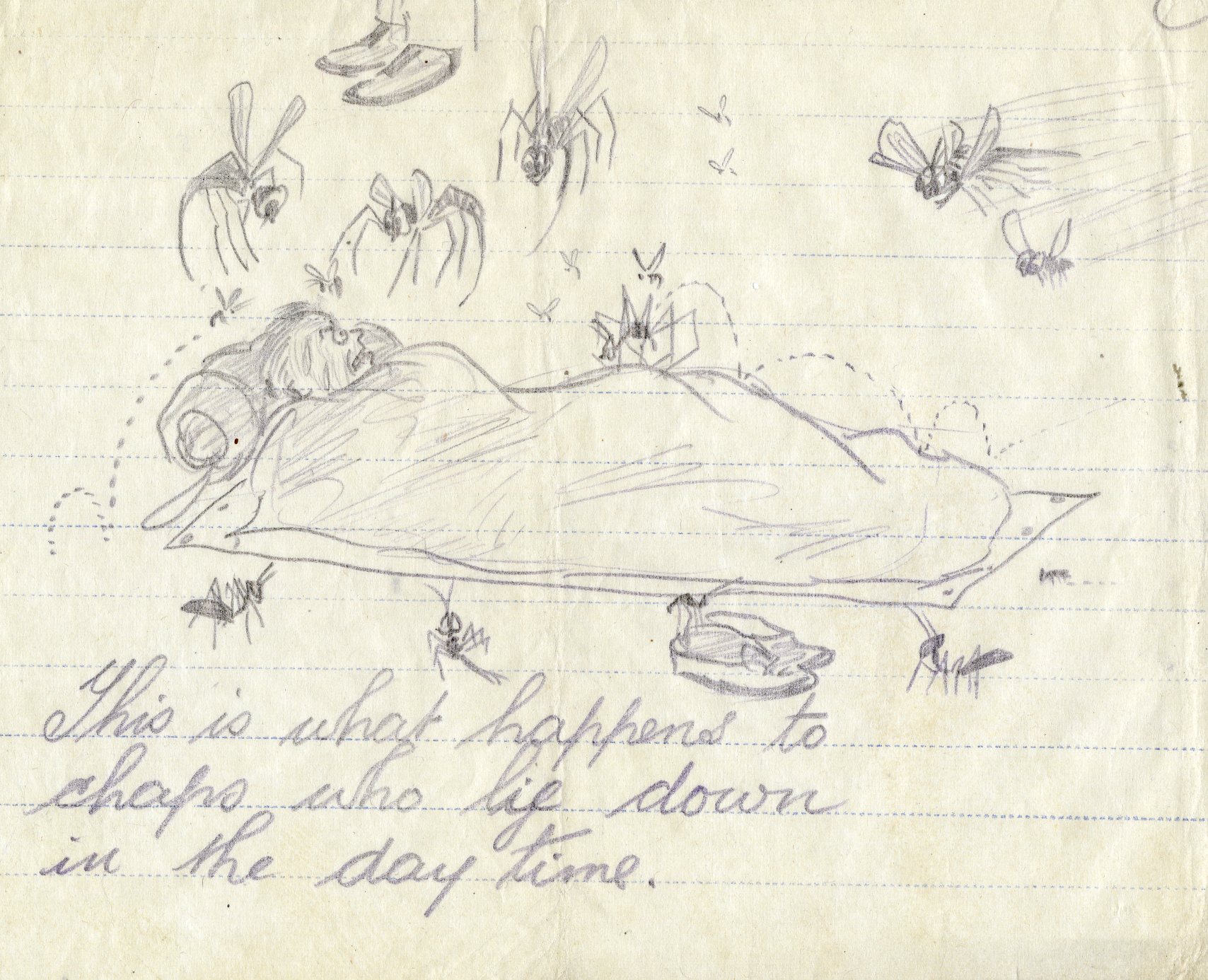 A Mech 3 Roscoe arrived in Egypt on 5 July 1918. The Middle East was a challenging environment for air mechanics dealing with the effects of sand and dust on the aircraft, as well as maladies associated with the hot climate. He felt his initial training at Halton Camp did not adequately prepare him for his new duties:
“We started work in the fitting shop in Headquarters’ Flight, this morning at 6 a.m. I was handed over to a fitter as assistant and started to build up a Clerget engine. This is a rotary engine, so I will have to start learning again, as there seem to be very few stationary engines here. The training we got at Wendover appears to be of very little use here”.

The Headquarters’ Flight was situated at No. 32 Training Wing in Ismailia near the Suez Canal. This unit was part of a new structure introduced as the Royal Air Force expanded its training organisation overseas. Egypt was favoured for flying instruction due to its warm winter climate and clear skies. No. 32 Training Wing consisted of three training squadrons, each with a half aeroplane repair section: Nos. 18 and 20 Training Depot Stations and No. 58 Training Squadron. Each Training Depot Station was equal in strength to three squadrons in the UK: consisting of 565 personnel and 56 aircraft. In August 1918, A Mech 3 Roscoe was posted to No. 20 Training Depot Station at Shallufa. 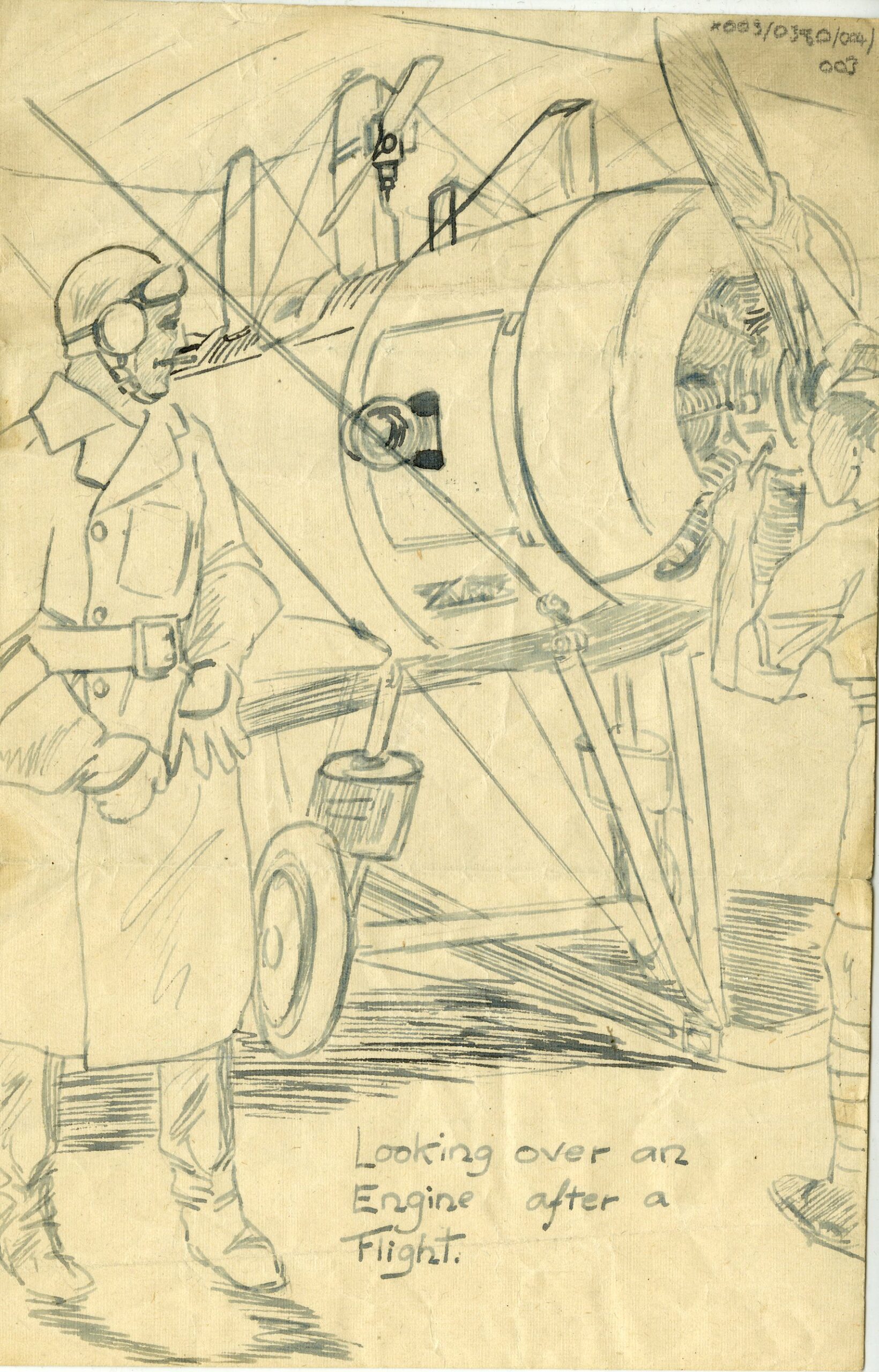 No. 20 Training Depot Station and other units were gradually introducing the rigorous new methods of the Gosport system developed by Major Robert Smith-Barry. Many accidents occurred in training, as A Mech 3 Roscoe notes in one of his letters:
“I sometimes feel glad they didn’t let me be a pilot, when I see the accidents (very seldom fatal) which happen frequently on the aerodrome. This morning a cadet on his first solo trip tried to turn without banking, and got into a flat spin, and fell about 30 ft. His machine was wrecked, and he crawled out with a few bruises and a graze on one knee. The Ambulance set off with such haste that one of the R.A.M.C. [Royal Army Medical Corps] men fell off the back and his mate went driving on in ignorance that his friend was running after the motor”.

It was the developing conflict in the Middle East which first drew the Royal Flying Corps to Egypt at the beginning of the First World War. The Suez Canal was a key strategic asset situated between British Empire possessions in India and the Far East. Threatened by the prospect of war in Europe, Britain rushed to secure it against aggressive enemy action. War was declared in November 1914.
Writing and receiving letters was a morale boost for A Mech 3 Roscoe, who asked for news of his siblings while his mother sent him gifts from home such as magazines and food. He wrote from No. 20 Training Depot Station on 3 December 1918:
“PS a chap in our tent received a tinned plum pudding (not homemade of course) and when he opened the tin the pudding was coated in mildew! Hard luck, wasn’t it? Anyhow, please take the hint, and don’t send me any tinned stuff because you never can tell how it will go on”.

While writing his later letters, Roscoe was afflicted with amoebic dysentery, an illness caused by the ingestion of a parasite. Amoebic dysentery was prevalent among military personnel in warmer climates and exacerbated by poor sanitation. His treatment necessitated prolonged hospital stays and periods of isolation.
The letters were not only a means of sharing information with family. They were in themselves, a diversion from the tedium of hospital life. When reading his letters, one can imagine A Mech 3 Roscoe holding the same papers while confined in his hospital bed. From there he recorded his impressions, adding cartoons to his accounts of daily events. 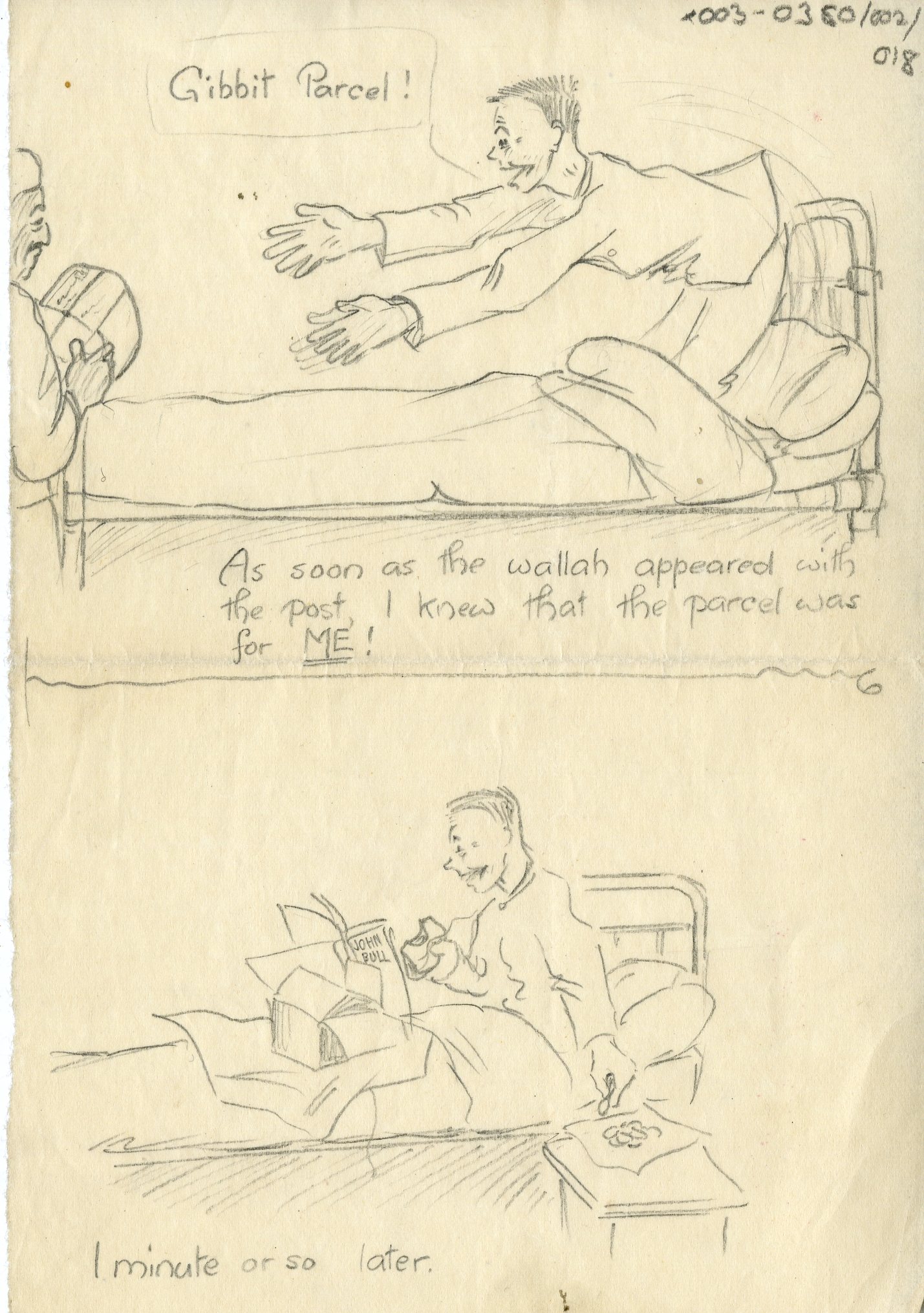 The Armistice of Mudros ended hostilities between the Ottoman Empire and the Allies in October 1918, and peace in Europe came in November. A Mech 3 Roscoe was re-categorised as a walking case the following spring. Still, he waited to hear of when the war would be over for him so he could return to civilian life. He wrote in March 1919:
“I don’t know the result yet but the chief obstacle to going home is the scarcity of ships. Some chaps marked for home have been knocking around for 3 months”.

Celebrations were a welcome interruption from the monotony of his everyday experiences. In letters he described recreational activities at the Mustapha Convalescent Depot in Alexandria such as concert parties and football games.
Meanwhile updates on current affairs took some time to reach Egypt. In January 1919, A Mech 3 Roscoe asked for news on the outcome of the 14 December 1918 General Election:
“Please let me know how the election has gone, as I should like to hear that the Labour man got in”. 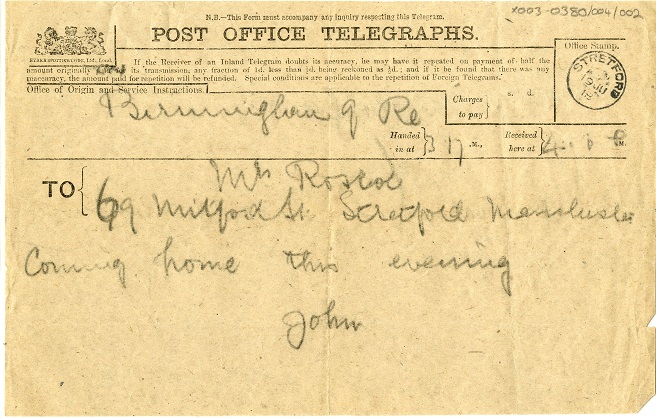 He travelled back to England in May 1919 and was immediately sent to Bethnal Green Military Hospital for further treatment and onwards to the Disposal Centre at Halton Camp. Thankfully he was discharged by September and returned to Stretford near Manchester. Finally, he was home and could celebrate Christmas 1919 with his family.