Four Royal Flying Corps, (RFC), squadrons, plus an Aircraft Park, acting as a reserve, crossed the Channel in support of the British Expeditionary Force in mid-August 1914. By 19 August, the RFC was flying reconnaissance sorties to locate the German armies which were closing upon the small British contingent.

Following the Battles of Mons and Le Cateau, the squadrons were caught up in the retreat to the River Marne and quickly found that the rigours of campaigning severely reduced the serviceability, and indeed life-expectancy, of their aircraft. Only a small handful of the aircraft which crossed the Channel in August 1914 survived for more than two or three months.
Now, one hundred years later, it is an opportune moment to examine the aircraft which rendered such brief but valuable early service.

The most numerous RFC aircraft in 1914 was the Royal Aircraft Factory B.E.2a. A direct descendant of the Army Balloon Factory, the Royal Aircraft Factory was primarily employed in designing and testing a range of experimental aircraft, some of which would later see service with the RFC.
In 1911, a small tractor aircraft emerged from the Factory, known as the Bleriot Experimental 1, or B.E.1. Although designed by Geoffrey de Havilland, the War Office regarded M. Bleriot as the world’s foremost designer of tractor aircraft, just as Farman was considered the leading pioneer of the pusher, (hence the F.E. appellation).

Shortly afterwards, a second, similar, aircraft, known as the B.E.2, began flying. Both were the result of intensive study by de Havilland and Edward Busk into making an aeroplane as stable as possible, thereby allowing the pilot to fly slowly over enemy positions, while his observer compiled a report. In August 1912, the War Office held a competition at Larkhill on Salisbury Plain, intended to find a standard aircraft with which to equip the new RFC. Although the competition was won by Samuel Cody, whose aircraft performed best in aggregate across the various trials, it was clear that the B.E.2 was a far more serious proposition. While no orders were made for the Cody, the B.E.2 was ordered in quantity. A number of small modifications were made to the original B.E.2 design and the production version became known as the B.E.2a. However, as a strictly experimental facility, the Factory was obliged to farm out construction work to a number of sub-contractors, notably Bristol, Vickers and Armstrong Whitworth.

In August 1914, 2 and 4 Squadrons were equipped exclusively with the B.E.2a, and the type gave entirely satisfactory service during the early months of the war. A B.E2a, either serial 471 or serial 327, was the first RFC aircraft to land in France on 13 August and it was a B.E.2a, in company with a Bleriot XI, that made the first reconnaissance sortie on 19 August. 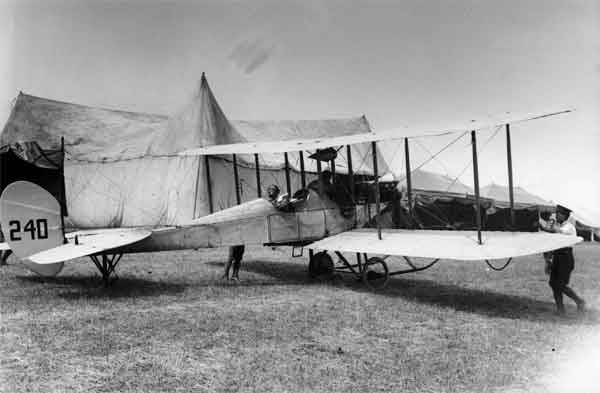 A direct development of the B.E.2a, the B.E.2c, joined the RFC in France in August 1914. Further researches in to stability had given this new type wings of positive stagger, aileron control, a small fin forward of the rudder and a large rectangular tailplane. Although much maligned for its performance later in the war, when it was outclassed by newer German types, it must be remembered that in 1914, few, if any, envisaged the intense aerial fighting of 1916 and 1917. 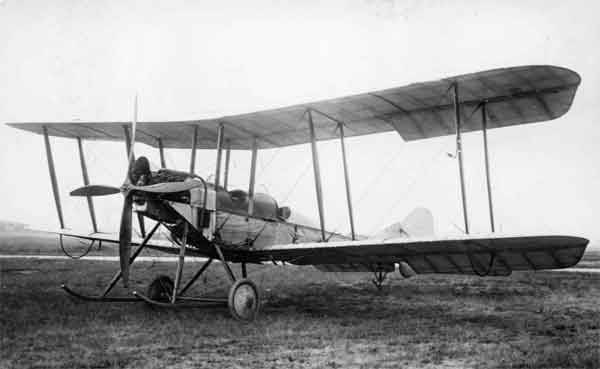 A direct development of the B.E.2 was designed by the Royal Aircraft Factory in 1911, in which the Renault engine was replaced by a Gnome rotary, around which there was great interest. A series of refinements led to the B.E.8 of 1913, an aircraft endowed with positive stagger and a small tailfin, while control was by wing-warping.

A Central Flying School in India was planned during 1914 but the idea was thwarted by the outbreak of war. Nevertheless, two B.E.8s, earmarked for this school, were at Farnborough in August 1914, one of which is seen in the accompanying photograph. Wearing an early and crude form of camouflage, this aircraft left Farnborough on 11 August and, by the 14 August, was at the Aircraft Park at Amiens. Two days later, the aircraft crashed, killing its crew. The RFC made little subsequent use of the type, which they knew as the “Bloater”. 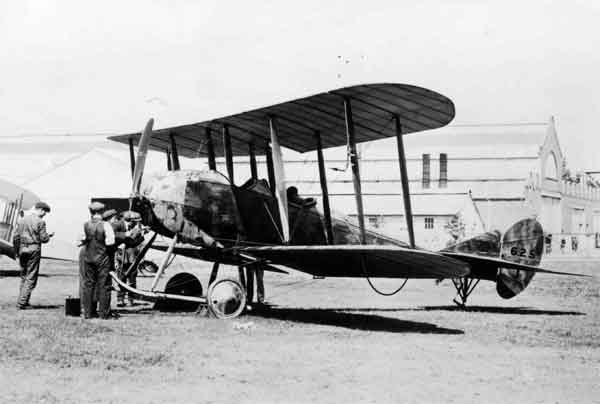 A further refinement of the B.E.2 design was the R.E.1 (Reconnaissance Experimental 1). This elegant and very stable aircraft was originally designed to incorporate armour protection for its crew, although this idea appears to have been quickly abandoned. Only two examples were built and the second was issued to 6 Squadron in May 1914. This squadron did not go to France and was deprived of its aircraft and personnel to reinforce the others during mobilization. On 22 August, a request for any spare aeroplanes was made by the RFC in the Field and the R.E.1 flew to France the following day. However, its career there was brief indeed, for it was struck off charge on 1 September. 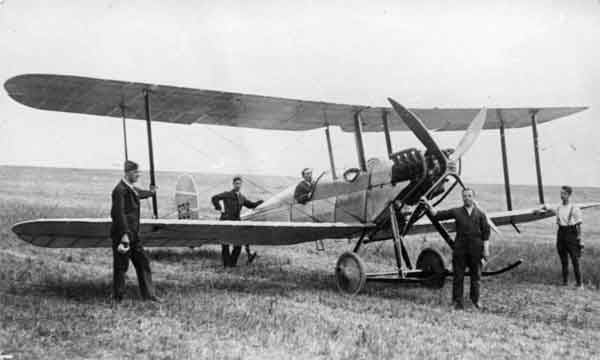 The only other British type to accompany the RFC to France was the Avro 504, an aircraft which had made a sensational debut at Hendon in 1913, where it showed an incredible turn of speed. The RFC ordered twelve aircraft in April 1914 and three had joined 5 Squadron by the time war was declared. Avro 504, serial 390, was unfortunate enough to be brought down and captured on 22 August and it was this incident which gave the Germans their first intimation that British forces were somewhere in front of them.

Despite this unpromising start, three Royal Naval Air Service Avro 504s made a daring attack on the German airship base at Friedrichshafen in November 1914, while later versions of the type went on to give invaluable service as training aircraft into the early 1930s. 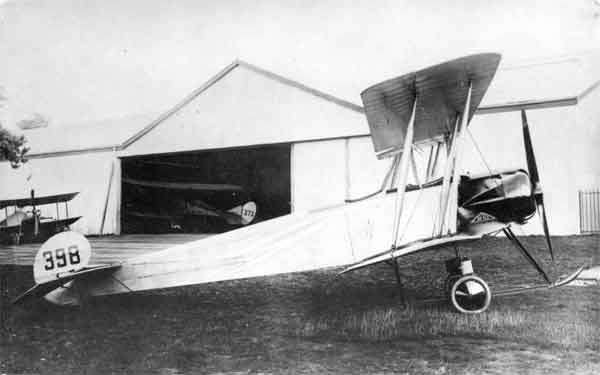 The Henri Farman F.20 appeared in 1912 and by 1913 the RFC had taken a number on charge. Later that year, one aircraft famously demonstrated its ability to carry a machine gun and, by the outbreak of war, the type was serving with 3 and 5 Squadrons. No fewer than eleven accompanied the RFC to France and it was with Farman serial 341 that Louis Strange fitted a Lewis gun upon a mount of his own design. An attempt to intercept a German aircraft on 22 August ended in ignominious failure, as the Farman proved too lethargic to catch its intended prey, which easily climbed away. Like the Bleriot XI, the Farman’s performance was too marginal and its construction too delicate to ensure its viability as a fighting aircraft and the last was retired from front-line service in March 1915. However, later examples of the type served as an initial training aircraft well into 1917, and provided the first experience of flight to many a budding young pilot. 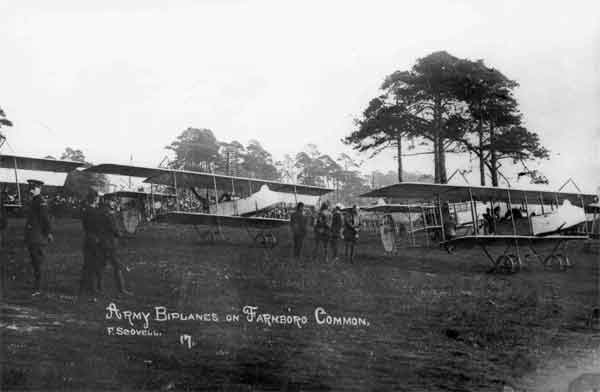 After Louis Bleriot’s successful cross-Channel flight in 1909, his company produced a series of larger and more powerful monoplanes, all of which appeared under the Type XI designation. A number of these served with the RFC in the pre-war years. Further Type XIs were impressed into service in August 1914 when the shortage of aircraft became acute. It would appear that only 3 Squadron operated the type in France and, as related earlier, it was an aircraft of this squadron, in company with a B.E.2a, which carried out the first RFC reconnaissance sortie of the war. However, the rigours of active service were too onerous for the little monoplane and the last examples were retired from front-line duty in early 1915. 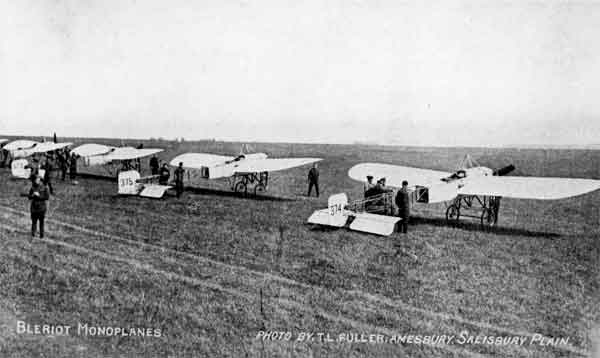 A Bleriot Parasol, intended to give the pilot improved visibility, especially downwards, was exhibited at the Olympia Aero Show in 1914. Immediate interest was shown by the RFC and, after a number of evaluation flights in the Olympia Show aircraft had been made, a recommendation was given in June 1914 to adopt the type for service use. Although events overtook the RFC’s decision, one Parasol, probably the aircraft which had been evaluated but not purchased, was impressed in August. Allocated serial 616, the Bleriot served with 3 and 5 Squadrons and was not struck off charge until May 1915. It is perhaps of interest to note that one of the mechanics who became familiar with this aircraft during its time with 3 Squadron was one J.T.B. McCudden…

Our ‘First World War in the Air’ exhibition is funded by BAE Systems and the Heritage Lottery Fund.