26 January 2016 By Andrew Simpson: Curator, Department of Aircraft and Exhibits in Art Collection
This portrait of raconteur and bon vivant ‘Paddy’ Barthropp was donated in December 2015, from the estate of his widow, the late Margaret Elisabeth ‘Betty’ Barthropp. Painted in 1965 some years after he had retired from the RAF, it shows him wearing his RAF jacket with decorations. 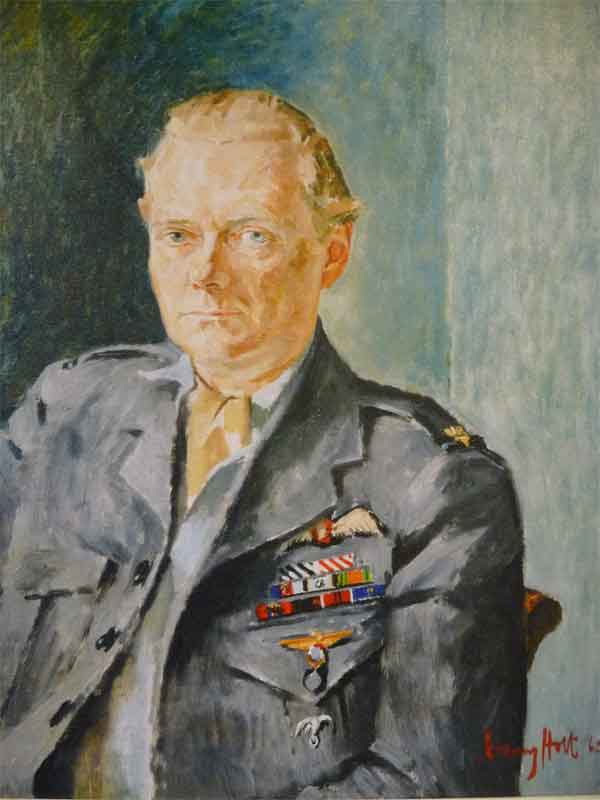 The son of an amateur steeplechase rider, whose love of riding he inherited, ‘Paddy’ was born during a family visit to Dublin in 1920, was educated in England, and joined the Rover Car Company in Coventry as an Engineering Apprentice. As a candidate for a short service commission he began elementary flying training at White Waltham in November 1938, trailing the local hunt in his Tiger Moth, and finishing his training at Peterborough in July 1939.

On the first day of the War – 3 September 1939 – he went to No. 1 School of Army Co-operation at Old Sarum, Wiltshire, being posted to No. 613 (Army Co-operation) Squadron at RAF Odiham Hants. on 9 October 1939, initially flying the obsolescent Hawker Hind and Hawker Hector biplanes, and later the Westland Lysander (of which there is an example at our London site, and there is a Hind at RAFM Cosford) covering the British Expeditionary Force in France and later coastal patrols and air-sea rescue sorties, and volunteered for RAF Fighter Command in August 1940.

He converted to fly Spitfires at Hawarden, near Chester and joined the Spitfire-equipped No. 602 Squadron at Westhampnett on 8 September 1940. His first day in action was at the climax of the Battle of Britain – 15 September 1940- when he was airborne four times.

After ‘resting’ as a flying instructor in Shropshire from October 1941 whilst as ever enjoying fast cars and lively female company and always pushing against ‘stuffed shirt’ authority, he returned to operations with No. 122 Squadron at Hornchurch on 15 May 1942, and two days later, whilst escorting six Douglas Boston light bombers attacking a factory, his controls were wrecked by cannon fire from a Fw 190 (Focke-Wulf Fw 190) near St. Omer, forcing him to bale out, and he was captured upon landing, meeting the pilot who had shot him down that evening.

Despite attempting to escape within days of arriving at Stalag Luft III at Sagan and spending 100 days in solitary confinement over 18 months for various misdemeanours and later helping to dig an escape tunnel from a camp for the more troublesome RAF PoWs (Prisoners of War) in Poland only to be recaptured by the Gestapo after some time on the run in Poland he remained a Prisoner of War until 2 May 1945. In January 1945 he and thousands of other prisoners had endured the ‘Long March’ westwards ahead of advancing Soviet forces. He and a colleague acquired a Mercedes fire engine and drove it to Brussels via Hamburg!

He was initially sent to Norway to locate the graves of shot-down airmen and confirm their identities, receiving the Order of King Haakon in addition to the Cross of Lorraine previously received from the French Government. Choosing to stay in the post-war RAF on a permanent commission, he did a course at the Empire Test Pilots’ School at Cranfield and served at the Aeroplane and Armament Experimental Establishment at Boscombe Down, moving to HQ (Head Quarters) Fighter Command at Bentley Priory in 1948 after a period in Khartoum for hot weather trials of the Gloster Meteor jet fighter.

In March 1952 he went to RAF Waterbeach as Wing Commander Flying, again flying Meteors (for which work he received the Air Force Cross in 1954, having led a formation of 288 Meteors at her Coronation in 1953), and to an admin post at Air Headquarters Hong Kong in 1954. There he delegated most of his duties to a junior officer and a Corporal, leaving time to take up horse racing, becoming a successful jockey.

Returning as Station Commander RAF Honiley, home to two Meteor squadrons, and in March 1957 to RAF Coltishall as Wing Commander i/c Admin. Finding Administration dreary, he accepted release under a ‘golden bowler’ scheme, and retired from the RAF in December 1957 and started a successful chauffeur-driven Rolls Royce car hire business in London. One of his cars featured in the Bond film Casino Royale.

Twice married and a great supporter of the Battle of Britain Fighter Association and campaigner for back-pay owed to former PoWs, he died on 16 April 2008, aged 87.

I am a keen amateur archaeologist and vintage transport enthusiast, I have worked at the RAF Museum since 1989 and I have been in my present post since 1992. I am a great fan of Propliners and pretty much anything with lots of piston engines, I wish I could have seen (and heard!) the Brabazon, Princess, and B.36. I also produce all the detailed RAFM aircraft histories as seen on the RAFM website.