The RAF Museum’s Archives hold a letter, written by Lieutenant Ronald FH Norman of No. 55 Squadron to his mother on 11 November 1918, Armistice Day. It is a letter in which he wonders if there were any celebrations around Buckingham Palace. (There were!) However, he also explains to his mother how on the previous day, he was on a raid in which his leader was shot down by ‘Archie’, their nickname for anti-aircraft fire. 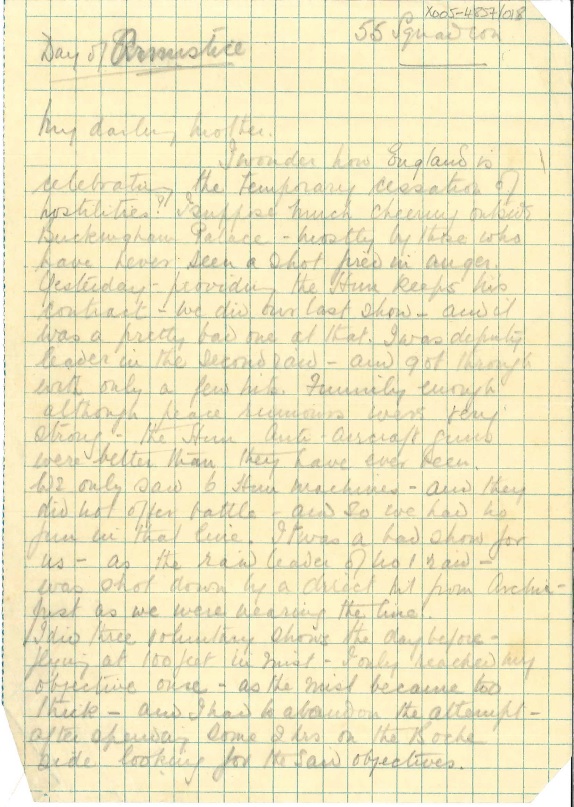 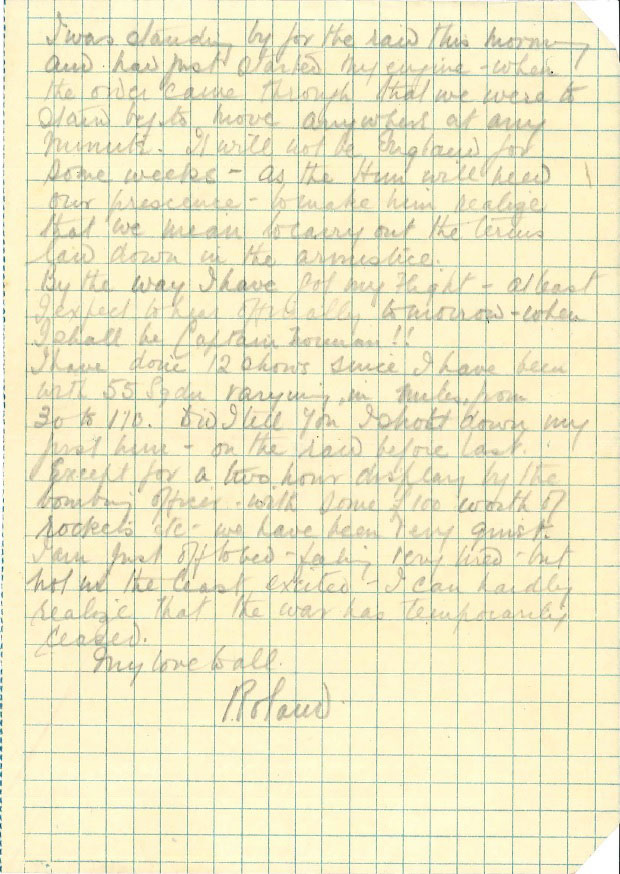 We now know that this leader was 2nd Lieutenant Harry CT Gompertz. He had previously served with the Royal Field Artillery, but transferred to the Royal Flying Corps in August 1917. An observer and successful air gunner with 55 Squadron in 1918, he was captured on 10 November when his Airco DH4 was shot down during a raid on Thionville. Unfortunately, the pilot of the DH4, Captain Duncan RG Mackay died of his wounds the next day. This makes Mackay one of the last, if not the last, casualty of the RAF during the First World War. 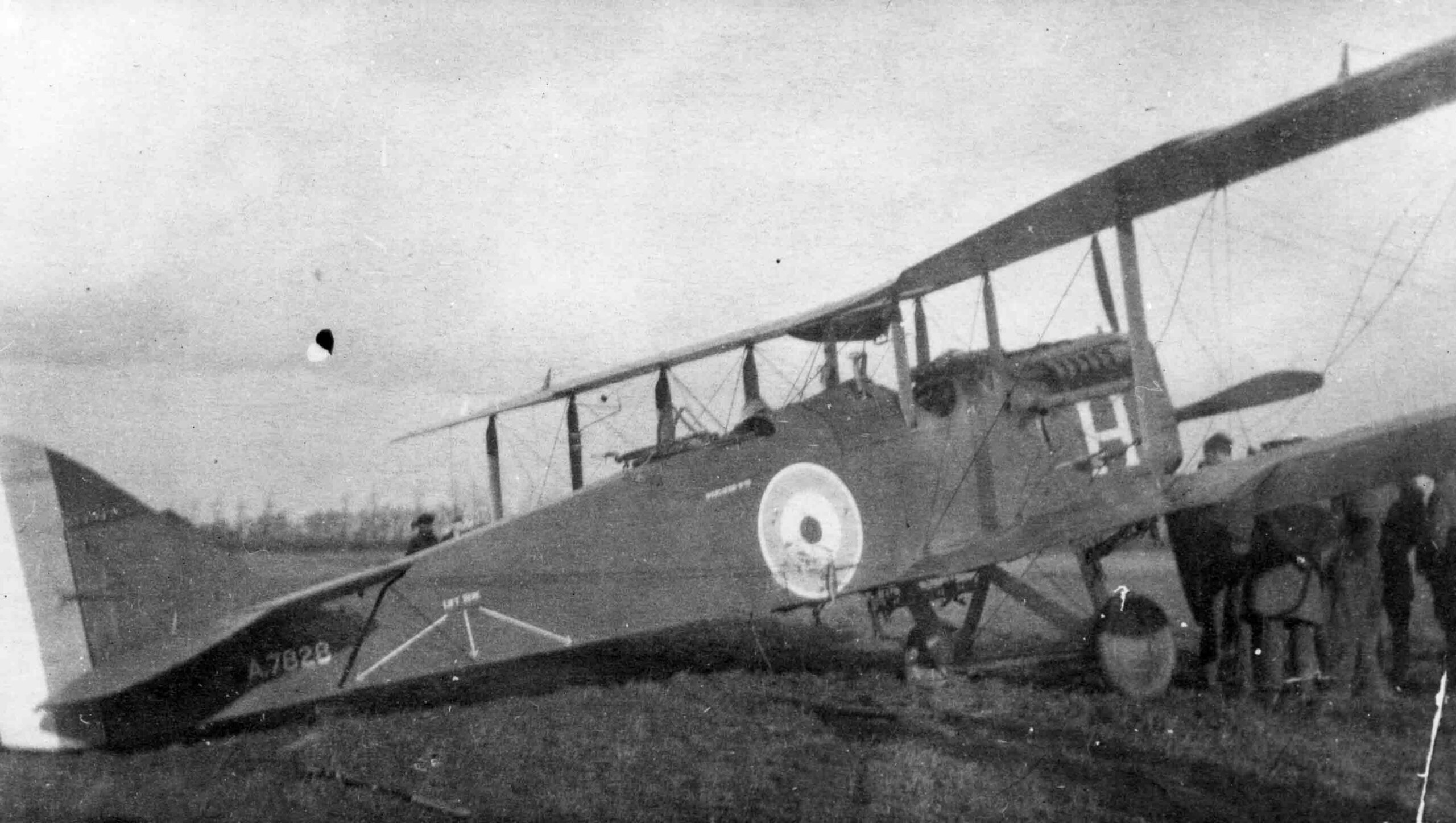 No. 55 Squadron was part of the Independent Air Force, which in turn was part of the Royal Air Force. In fact, the Independent Force was to some extent the raison d’être of the RAF. When German airships and later bomber aircraft attacked targets in Britain, the Royal Flying Corps and the Royal Naval Air Service did not have the capabilities of attacking Germany. In 1917 the decision was taken to unify both forces into the Royal Air Force, separate from the Army and Navy.

On 6 June 1918, a few weeks after the creation of the RAF on 1 April 1918, the Independent Air Force came into being. Some squadrons, like No. 55 Squadron operated at daytime, while others were dedicated night bomber squadrons. Some of these flew heavy Handley-Page O/400, which could carry up to 2,000 lb of bombs. 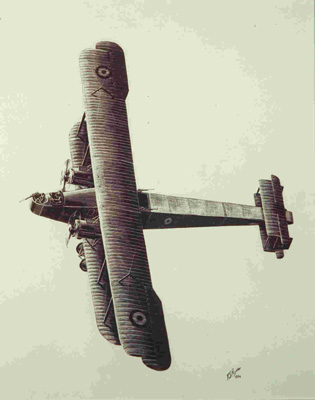 Although the Independent Air Force was stood down after the war, lessons learned were later applied to Bomber Command, which became a decisive weapon during the Second World War.

The transcript of Lieutenant Ronald FH Norman’s letter is as follows:

I wonder how England is celebrating the temporary cessations of hostilities? I suppose much cheering about Buckingham Palace – mostly by those who have leave. Seen a shot fired in anger yesterday – providing the Hun keeps his contract – we did our last show – and it was a pretty bad one at that. I was deputy leader in the second raid – and I got through with only a few hits. Funnily enough though the peace rumours were very strong – the Hun anti-aircraft guns were better than they have ever been. We only saw 6 Hun machines – and they did not offer battle, so we had no fun in that line. It was a bad show for us – as the raid leader of No1 raid – was shot down by a direct hit by Archie just as we were wearing the line. I did three voluntary shows the day before – flying at 100ft in mist – I only reached my objective once – as the mist became too thick – and I had to abandon the attempt – after spending some two hours on the Boche side looking for the said objectives.

I was standing by for the raid this morning and had just started my engine – when the order came through that we were to standby to move anywhere at any minute. It will not be England for some weeks as the Hun will need our presence – to make him realise that we mean to carry out the terms laid down in the Armistice.

By the way, I have got my flight – at least I expect to hear officially tomorrow, when I shall be Captain Norman. I have done 12 hours since I have been with 55 Sqdn ranging, in miles, from 30 to 110. I shot down my first Hun – on the raid before last. Except for a 2 hour display by the bombing (? word hard to read) officer – with some £100 worth of rockets etc. we have been very quiet. I am just off to bed – feeling very tired – but not in the least excited – I can hardly realise that the war has temporarily ceased.

My love to all,

This temporary cessation was ratified by the Treaty of Versailles on 28 June 1919. A treaty that, rather than bringing permanent peace to a war weary world, was to usher in yet another world war within a generation.