This week it is 100 years since Sir John Alcock and Sir Arthur Whitten Brown made the first non-stop aeroplane flight across the Atlantic Ocean. In this blog, Archive, Library and Research Manager Nina Hadaway highlights some of the RAF and RAF Museum connections to this pioneering transatlantic tale. 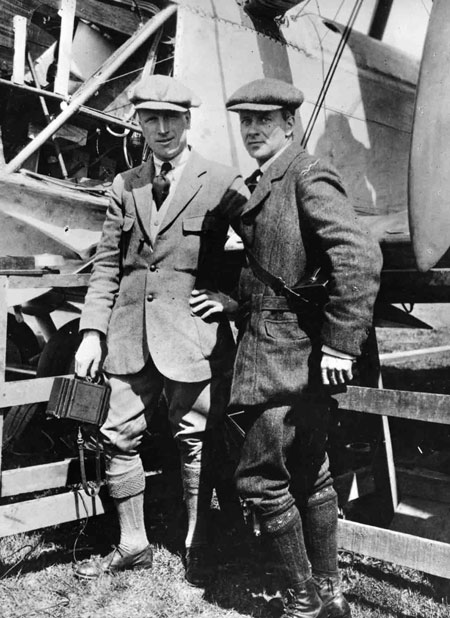 Today flying across the Atlantic is a commonplace event. During the early years of powered flight however there were many ‘firsts’ to be undertaken. The owner of the Daily Mail newspaper, Lord Northcliffe was a strong advocate of aviation. His newspaper regularly offered prize money for pioneering flight competitions. The Transatlantic Prize of £10,000 to the aviator who was first to cross the Atlantic from America to the UK within 72 consecutive hours, was an example of one of these. Originally offered in 1913, the contest was suspended during the First World War but was resumed afterwards. 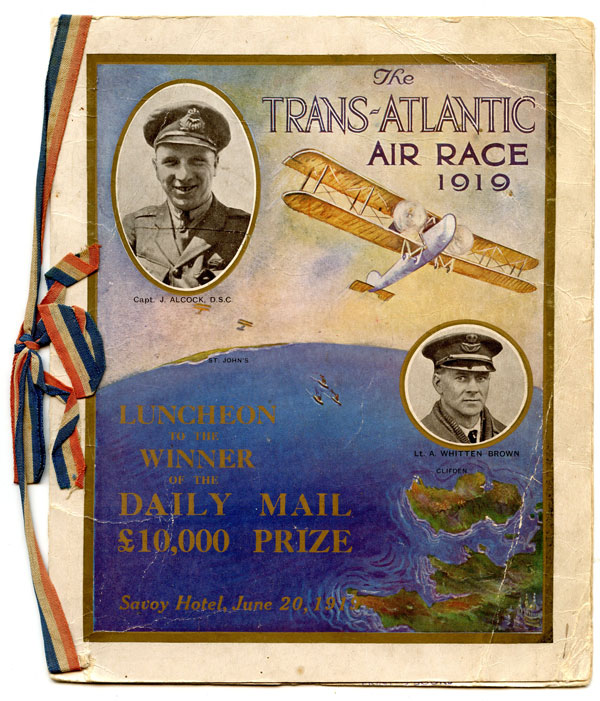 Several teams entered the race but it was Captain John Alcock and Lieutenant Arthur Whitten Brown who on 14-15 June 1919 succeeded in accomplishing what nobody else had done before. Representing the aviation firm Vickers, in their specially constructed and modified Vickers Vimy, they completed the crossing from Newfoundland to Ireland in 15 hours and 57 minutes, flying into the history books. 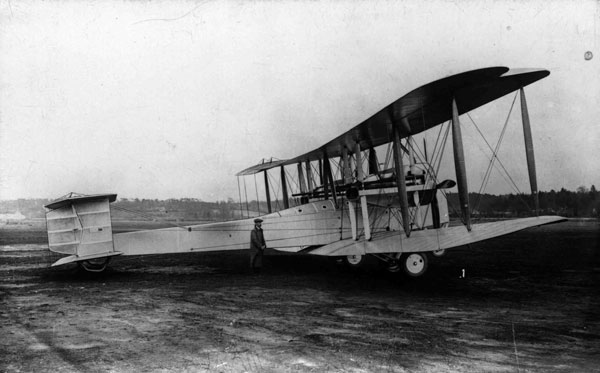 The flight itself was not without incident. The aircraft famously crash landed in a bog near Clifden, County Galway in Ireland. Brown’s navigation logs and chart, held by the RAF Museum record the mechanical failure, fog and bad weather endured by the crew but they also capture the spirit of the venture. 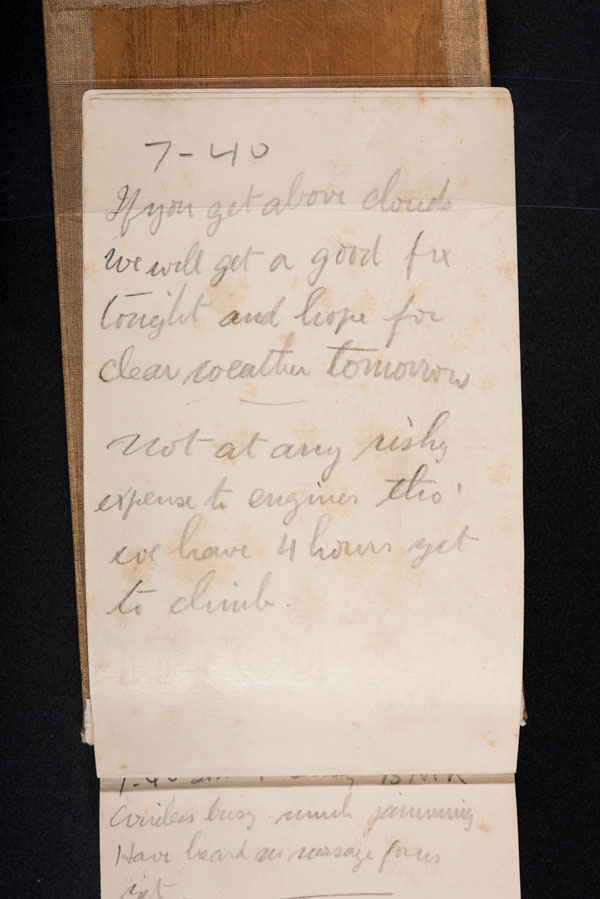 Visit the Museum’s RAF Stories site to find out more.

Comfort was provided by warm drinks, food and lucky mascots. The RAF Museum holds the vacuum flask which can be seen being loaded onto the Vimy in the photograph below. 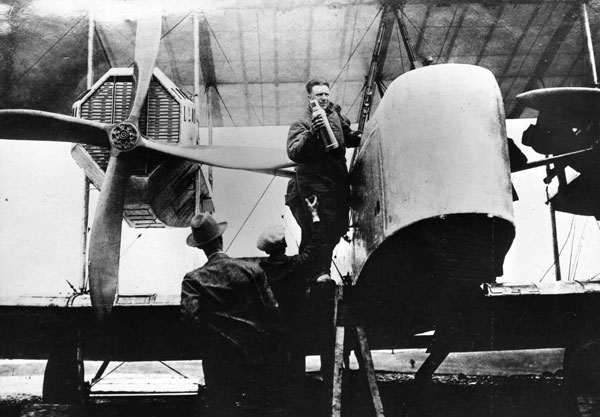 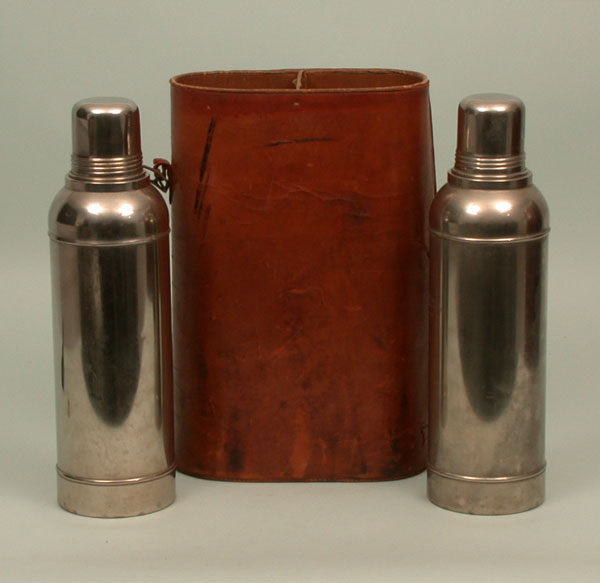 Mascots and superstitions have always been important to civilian aviators and military personnel. View the RAF Museum’s online exhibition about lucky charms to find out more.

Alcock and Brown each took a cat mascot on their flight. Alcock’s ‘Lucky Jim’ is on display with the Science Museum in Manchester.

Brown’s ‘Twinkletoes’ is on display at the RAF Museum’s Cosford site. 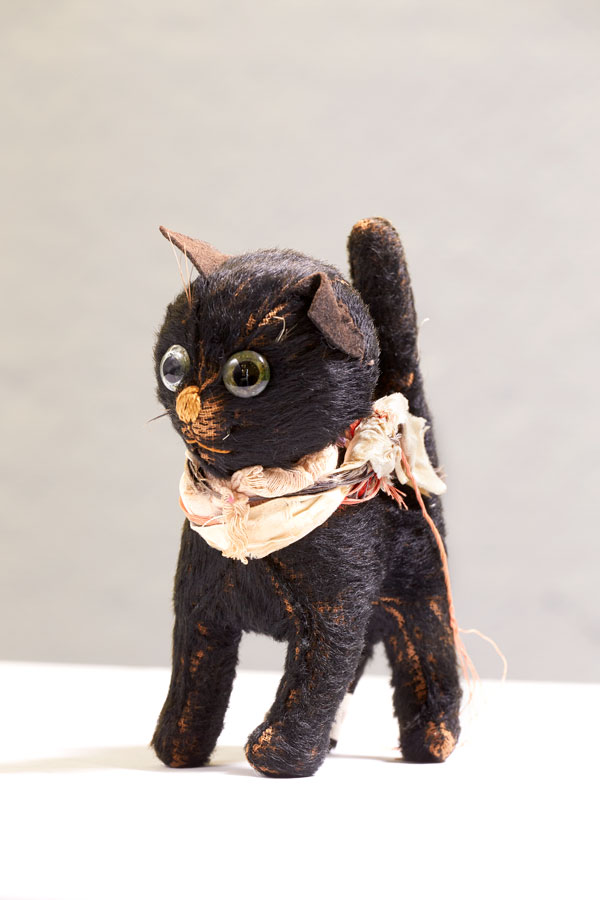 It was not the first time that John Alcock had piloted an aircraft in an air race. He had been a regular competitor at the pre-war Hendon displays organised by Claude Grahame White, himself a contestant in the Daily Mail sponsored London to Manchester race of 1910. The RAF Museum’s London site occupies land which formed a part of the original Hendon airfield. 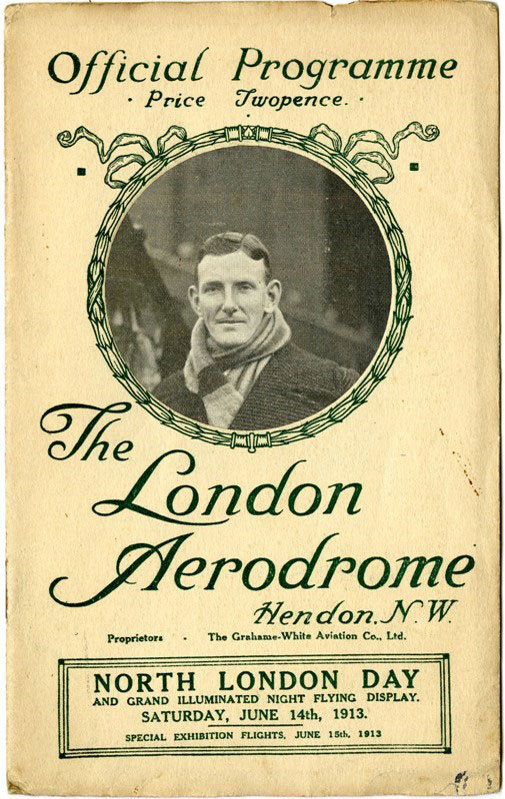 During the First World War Alcock and Brown served in the air services and both men were held as Prisoners of War. Brown, served with 2 Squadron Royal Flying Corps as an Observer in France. Shot down twice he was captured after a reconnaissance flight on 10 November 1915. Repatriated back to England in 1917 he went on to work in the Ministry of Munitions with his future father-in-law. 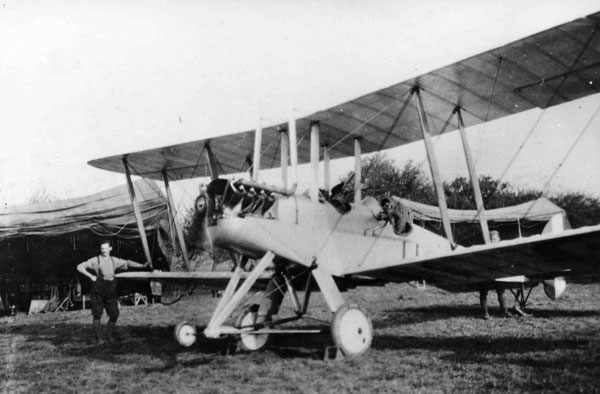 Alcock flew with the Royal Naval Air Service in the Eastern Mediterranean area conducting long range bombing operations against the Ottomans. He was captured in September 1917. The RAF Museum’s Archive collection contains a menu card for a supper held in August 1918 to mark the inauguration of the Royal Air Force (RAF). It took place at the Officers POW Camp, Kedos, Anatolia, Turkey. The card is signed by many officers including John Alcock. 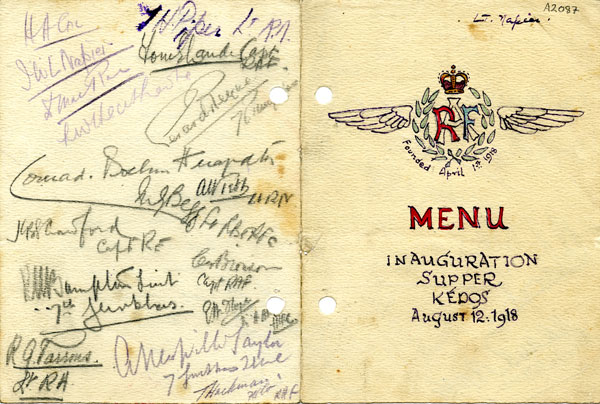 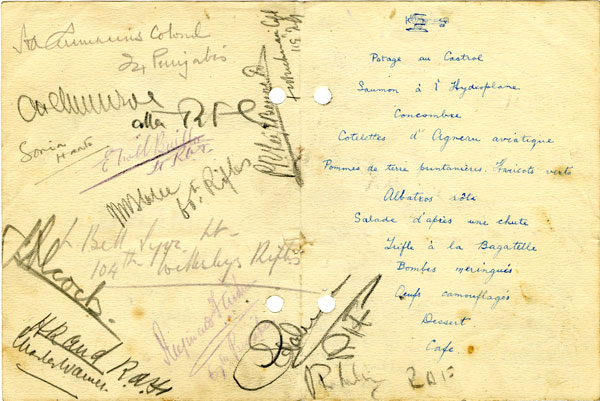 A celebrity following the pioneering flight in June 1919 unfortunately Sir John Alcock was killed only a few months later on 18 December 1919. He crashed in France while flying the new Vickers Viking amphibian to the Paris airshow.

During the Second World War Brown re-joined the RAF for a short time working with RAF Training Command but had to resign due to his health. He was also badly affected by the death of his only son, Flight Lieutenant Arthur (Buster) Brown who was killed on operations on 5/6 June 1944 whilst serving with 605 Squadron. Sir Arthur Whitten Brown passed away on 4 October 1948.

The first non-stop aeroplane flight across the Atlantic Ocean pushed the boundaries and demonstrated what was possible. It has been commemorated in many different ways over the years including the issue of stamps, the building of memorials, and the production of books. 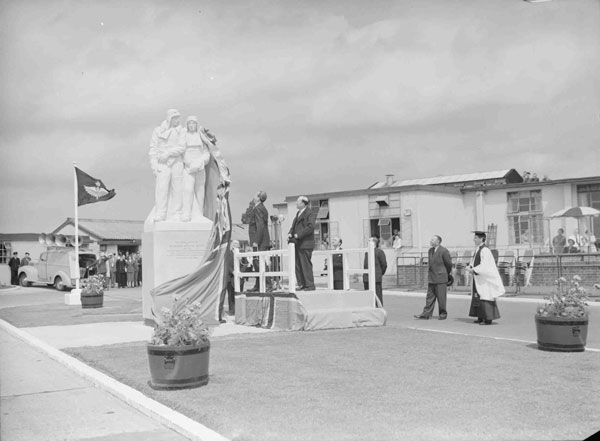 For the 60th anniversary of the crossing in 1979, two RAF McDonnell Douglas Phantom FGR2s made the trip from Goose Bay Newfoundland to Ireland. Sir John Alcock’s nephew, Squadron Leader A.J.N. (Tony) Alcock flew with navigator Flight Lieutenant W.N. (Norman) Browne in one of the of the aircraft – XV424. They were accompanied by ‘Twinkletoes’, Sir Arthur Whitten Brown’s toy cat mascot. The aircraft, sprayed in commemorative paint schemes completed the flight in 5 hours and 40 minutes setting a new record. XV424 is now on display at the RAF Museum London’s site in the colours of 56 Squadron. 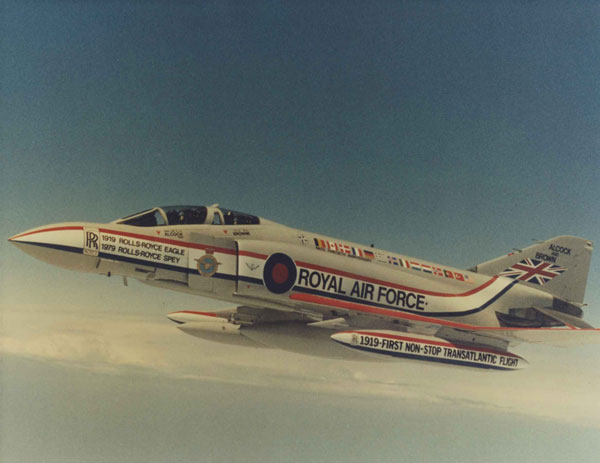 In 2019 to mark the centenary of Alcock and Brown’s flight there are many different activities taking place:

The Museum of Science and Industry in Manchester is also holding an event this weekend: https://www.scienceandindustrymuseum.org.uk/whats-on/flying-fun-celebrating-alcock-and-brown

In Ireland, an Alcock and Brown 100 Centenary Festival is being held at Clifden 11-16 June: https://alcockandbrown100.com/

In Canada the Admiralty House Museum has a temporary exhibition: http://admiraltymuseum.ca/temporaryexhibits/

Brooklands Museum in Surrey has also opened a very good exhibition about this significant flight: https://www.brooklandsmuseum.com/about/latest-news/new-aviation-exhibition-first-to-the-fastest-opens-at-brooklands-museum