After several unsuccessful attempts to develop an effective long range flying boat for the maritime patrol role, in 1916 the Royal Naval Air Service (RNAS) bought 50 twin-engined H.8 flying boats from the Curtiss Aeroplanes and Motors Corporation in the United States. Unfortunately, the H.8 was seriously underpowered until its two 160 HP Curtiss VXX engines were replaced with 250 HP Rolls-Royce Eagles.

The H.12 – as the re-engined H.8 was designated – proved much more satisfactory and entered RNAS service in 1917. However, the RNAS’s Seaplane Experimental Flight at Felixstowe, under the direction of Commander John Porte, was still dissatisfied with the H.12s performance on take-off and landing. Cdr Porte realised that the hull was main cause of the trouble so he and his team tried replacing it with a completely new one, which was stronger, more hydrodynamically efficient and also easier to build. 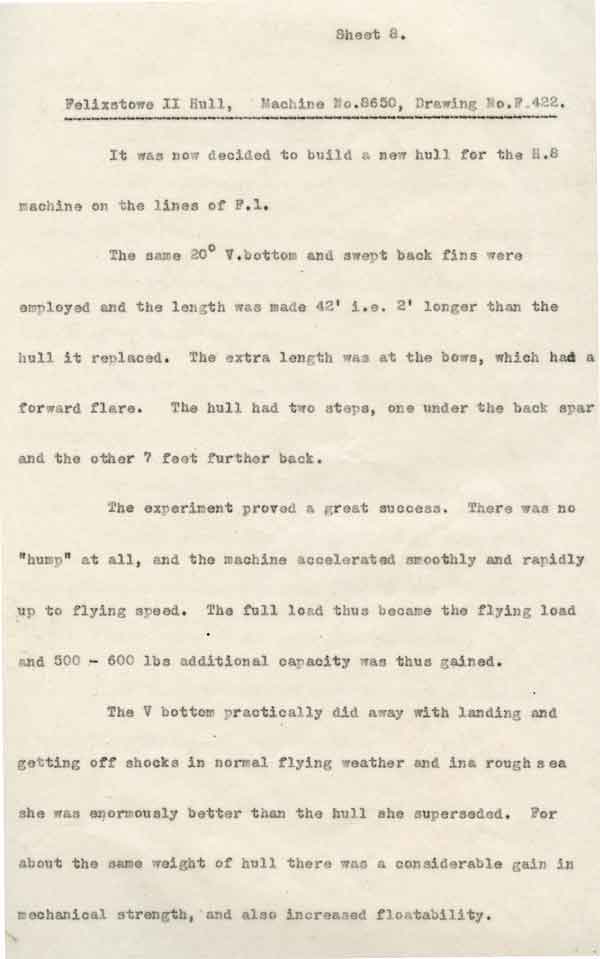 This is a page from “Report on experimental flying boat hulls, 1915-1916” issued by Seaplane Experimental Flight at Felixstowe, which is held by the Museum’s Archives collection. It summarises the important features of the F.2A hull design which replaced the original Curtiss version on the H.12 resulting in a significant improvement in performance. (RAFM reference B433)

With its revised hull and Rolls-Royce Eagle engines, the improved version of the H.12 was ready to go into production in the UK, where it was known as the Felixstowe F.2A. A practically identical aircraft, designated the H.16, was built in the United States and many H.16s saw service in the RAF alongside the Felixstowe flying boats. Cmr Porte and his team went on to improve the F.2A design still further resulting in the F.3 and F.5, both of which were in full production in the UK when the First World War ended. In RNAS and RAF service all of the Curtiss and the Felixstowe flying boats from the H.12 to the F.5 were known as Large Americas. 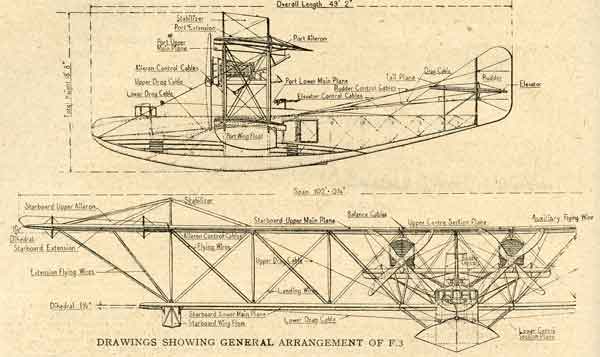 This general arrangement drawing of a Felixstowe F.3 was published in the January 29 1919 issue of “Aeronautics” in an article entitled “Large America Class Flying Boats (F.2A and F.3)” (RAFM reference PR01805). The War had been over for less than three months when this article was published and it was the first time detailed construction details and performance data for these aircraft appeared in print.

Such were the demands upon British aircraft manufacturers in 1917 that contracts for Felixstowe flying boats were awarded not only to experienced seaplane builders like Short Brothers and S.E. Saunders, but also to companies like Dick, Kerr and Company and the Phoenix Dynamo Company, which were building marine aircraft for the first time. 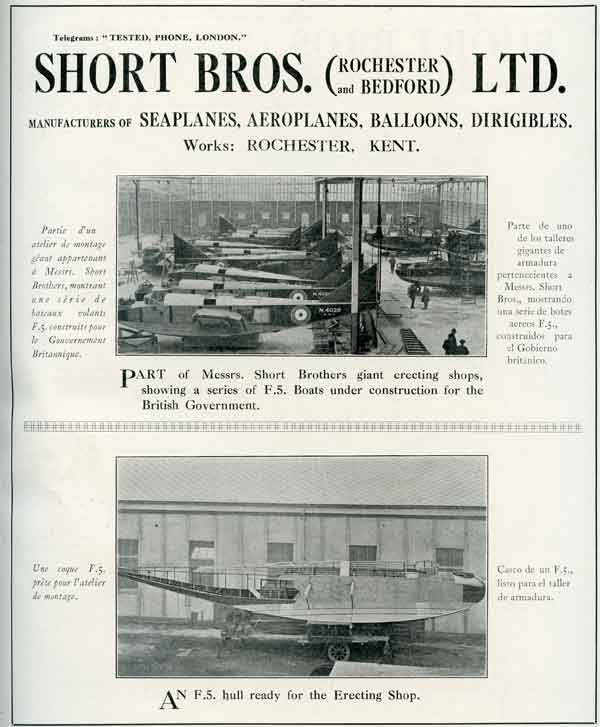 This advertisement for Short Brothers of Rochester appeared shortly after the First World War in “The British Aircraft Standard Catalogue, 1920-21” (RAFM reference 010061). It shows several Felixstowe F.5 hulls in the huge erecting shops at the Rochester works. Short Brothers were awarded contracts for two batches of 50 Felixstowe flying boats and completed a total of 35 F.3s and 25 F.5s before the remainder were cancelled at the end of the War. Hulls were built in a boatyard at Strood and final aircraft assembly carried out in the main works at Rochester.

Thanks to the simplified hull design incorporated in the Felixstowe flying boats, all of the manufacturers who were awarded contracts were soon delivering airworthy aircraft on schedule.

However, Phoenix in Bradford and Dick, Kerr in Preston had no convenient access to open water where their newly-built aircraft could be test-flown. Broken down into their major components their aircraft were transported by road from the factories to assembly and flight-testing outstations at Brough on the river Humber, South Shields on the Tyne and Lytham on the Ribble. In 1918 the company outstations at Brough and South Shields became Marine Aeroplane Depots under RAF control. 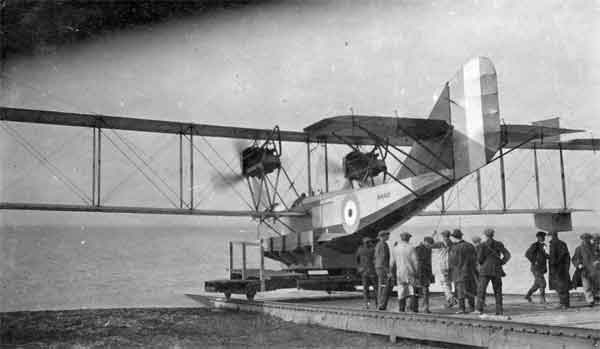 Here Felixstowe F.3 N4401, built by the Phoenix Dynamo Company in Bradford, is about to take to the water in 1918. The presence of a civilian handling party suggests that the photograph was taken while the aircraft was undergoing flight testing, probably at Brough. (RAFM reference X003-2602/6804)

Felixstowe flying boats were one of the most expensive aircraft types used by the RAF during the First World War. An F.2A airframe alone cost £6,738 and the two Roll-Royce Eagle VIII engines added another £3,245. Together this is equivalent to £430,000 at today’s prices. Although large numbers of flying boats were urgently needed, output was limited by the rate at which their Rolls-Royce Eagle engines could be produced. 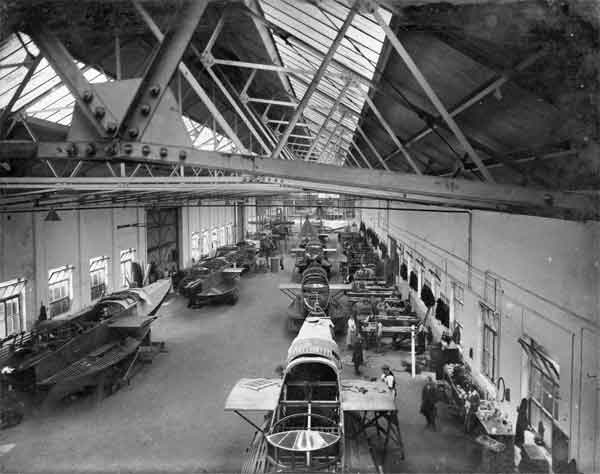 Felixstowe F.3 hulls under construction at the Phoenix Dynamo Company’s Thornbury Works in Bradford, 1918 are seen here. 24 F.3s and 15 F.5s were built by Phoenix during 1918 but an order for 30 more was cancelled when the War ended. During the Royal visit to Yorkshire in May 1918, King George V inspected the F.3 production line at the works. One of the aircraft’s systems demonstrated to him was the wireless and he listened to a message sent from an airborne aircraft picked up by a wireless receiver at the factory. (RAFM reference X003-2602/6753).
The numbers of all types of Large America flying boats delivered to the RNAS/RAF as follows: 84 H.12s; 24 H.12 Converts; 173 F.2As; 2 F.2Cs; 176 F.3s; 100 (approx.) F.5s; and 75 H.16s. When the First World War ended several orders were cancelled before completion and the numbers delivered from some production batches of F.5s is uncertain. By the end of the First World War the RAF had 53 F.2As, 96 F.3s and 69 H.16s on strength. 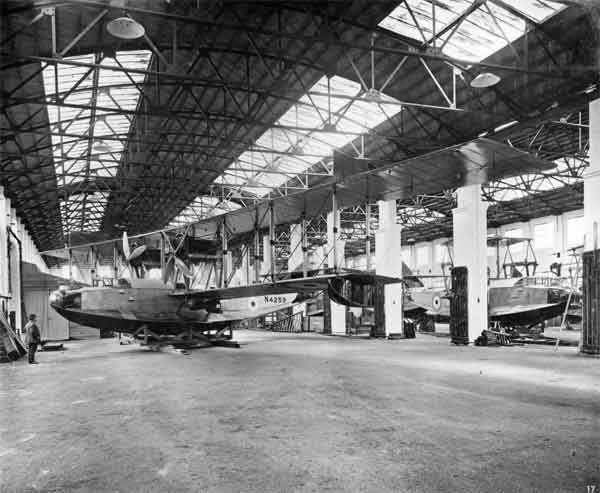 Here we see the interior of the Dick, Kerr factory at Preston, where F.3 N4259 is shown fully assembled, complete with bombs beneath the wings. Many of the hulls for Dick, Kerr’s aircraft were built by the Boulton Paul Company in Norwich and most of the assembly and testing was carried out at South Shields, a three-day journey from Preston by steam lorry. Out of the 150 aircraft ordered from Dick, Kerr a total of 61 F.3s and 2 F.5s were delivered. The remainder were cancelled when the War ended. (RAF Museum reference X003-2602/6795) 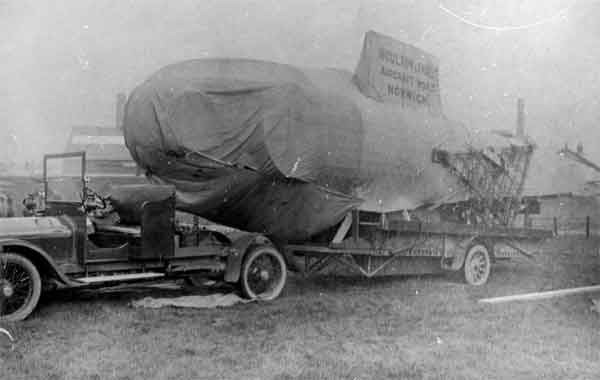 Here a Boulton and Paul built F.3 fuselage is seen on its side, covered in a tarpaulin probably being transported from Norwich to the Phoenix Dynamo works in Preston some time in 1918. 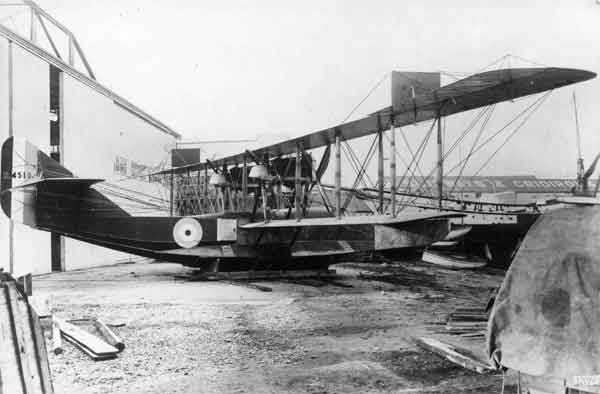 In this photograph N4510, the first F.2A delivered by May, Harden & May, sits on its cradle outside the company’s Hythe works in early 1918. May, Harden & May built 71 F.2A hulls for aircraft ordered from the Aircraft Manufacturing Co. (AIRCO) based at Hendon. (RAF Museum reference X003-2602/6613) 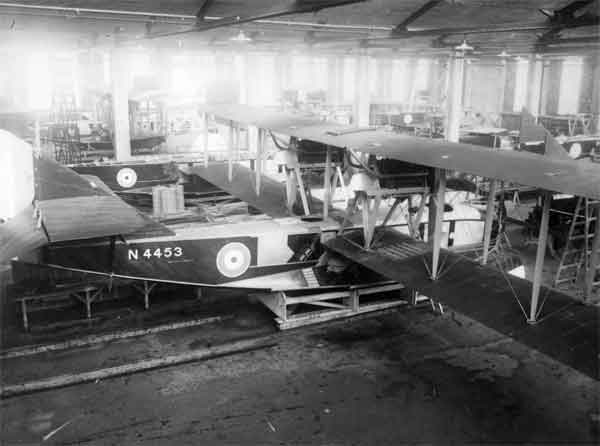 S.E. Saunders Ltd in the Isle of Wight built 100 F.2As and had a been given a further contract for 50 F.5s when the war ended. This photograph showing F.2As nearing completion was taken in the company’s works at East Cowes in 1918.

The Museum’s First World War in the Air programme of events and blogs are supported by BAE Systems and the Heritage Lottery Fund.