To complement the blog published earlier, this second part will illustrate and describe the Sopwith Camel and Dolphin.

Even as the Pup was entering service on the Western Front, the Sopwith design team was planning the next generation fighter. The Sopwith F.1, soon to be known by all as the Camel, first flew in the winter of 1916/1917. Although the Camel was a development of the Pup, there was in reality very little to connect the two. The most marked difference was the decision to group the heaviest elements of the aircraft, (the engine, fuel and oil tanks, armament and pilot), within the smallest space possible, increasing manoeuvrability. The torque from the rotary engine was also a factor in giving the Camel an agility that was probably unmatched by any other aircraft during the First World War.

It was originally intended to give dihedral to both wings but, to ease production, the decision was made to produce the upper wing without dihedral, while that of the lower wing was doubled to 5º to compensate. A problem with the prototype was the positioning of the cockpit underneath the upper wing, badly impeding the pilot’s view upwards and forwards and so, to remedy this, a cut out was made in the trailing edge. Another shortcoming was the decision to cover the breeches of the Vickers guns. As these were both fed from the right, clearing stoppages was a problem and most in-service Camels had a portion of this covering cut away. A variety of engines was fitted to the Camel, notably the 130hp Clerget, the 110hp Le Rhone and, in naval and later, RAF, versions, the 150hp Bentley B.R.1. The Clerget proved to be a source of endless trouble for the RFC and was eventually replaced by the Le Rhone or the 140hp Clerget 9Bf. Likewise, problems with the Sopwith Kauper synchronisation gear fitted to the Clerget were negated by the fitting of the superior Constantinesco gear to Le Rhone-powered aircraft.

The Admiralty was enthusiastic about the aircraft and the first production examples entered service with 4 Squadron, RNAS, in June 1917. The War Office was not far behind and the first RFC Camels were sent to 70 Squadron to replace its 1½ Strutters in June and July. The Camel was ordered in very large quantities and, as usual, Sopwith contracted production to other companies, including Ruston Proctor, Portholme, Boulton & Paul, Hooper and Clayton & Shuttleworth. Notable Camel aces were William Barker, Raymond Collishaw, D.R. McLaren and Henry Woollett. In terms of enemy aircraft destroyed, the Sopwith F.1 Camel is regarded as the pre-eminent fighter of the First World War, with 1,294 victories.

An important secondary role for the Camel was in ground-attack, beginning with the Battle of Cambrai in November 1917. Camel squadrons engaged in this work suffered very heavy casualties during 1918 but, faute de mieux, the Camel “fought on until the end of the war…magically manoeuvrable when flown with understanding of its fiercely pronounced idiosyncrasies, savagely unforgiving of incompetent handling.”[1] 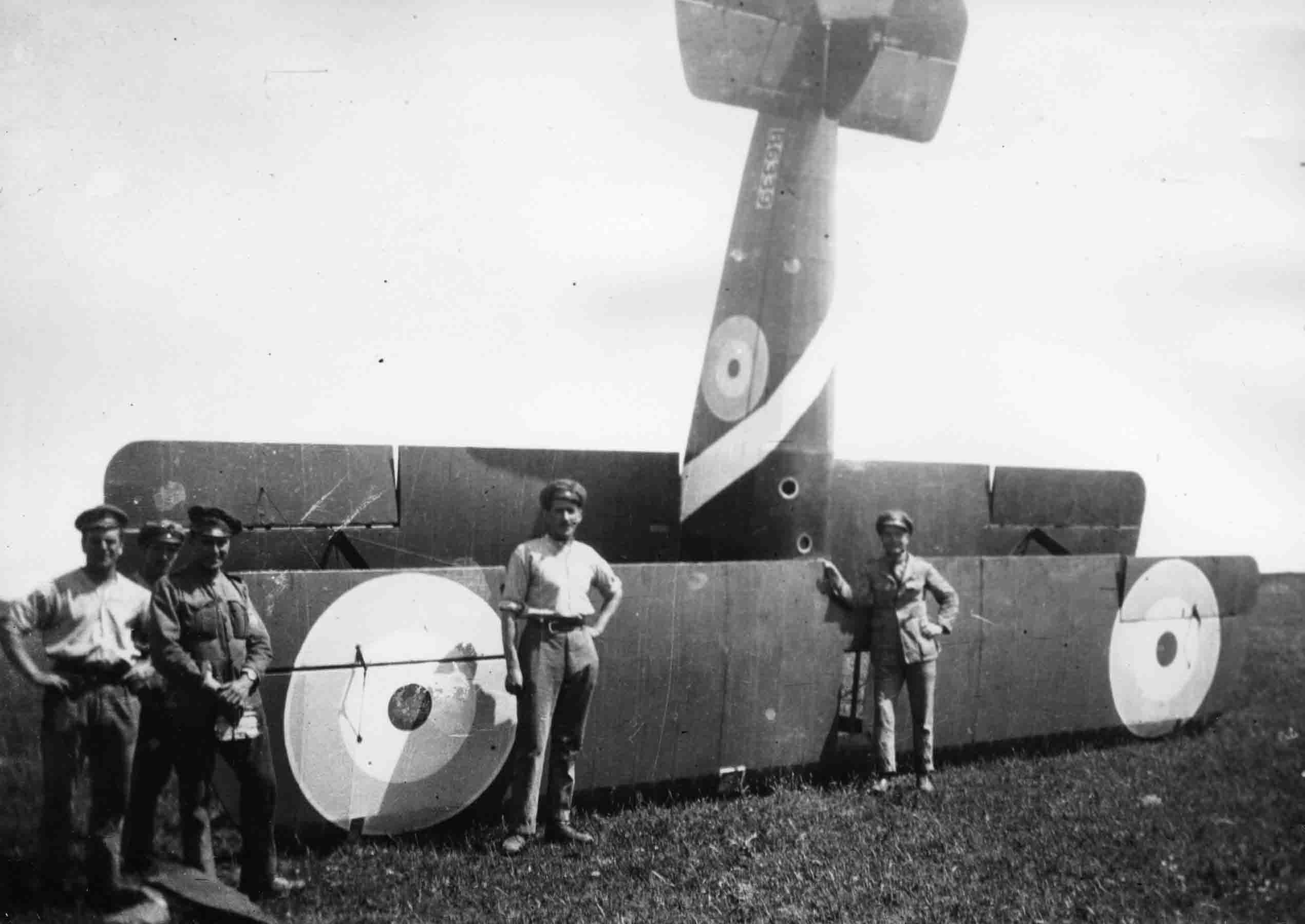 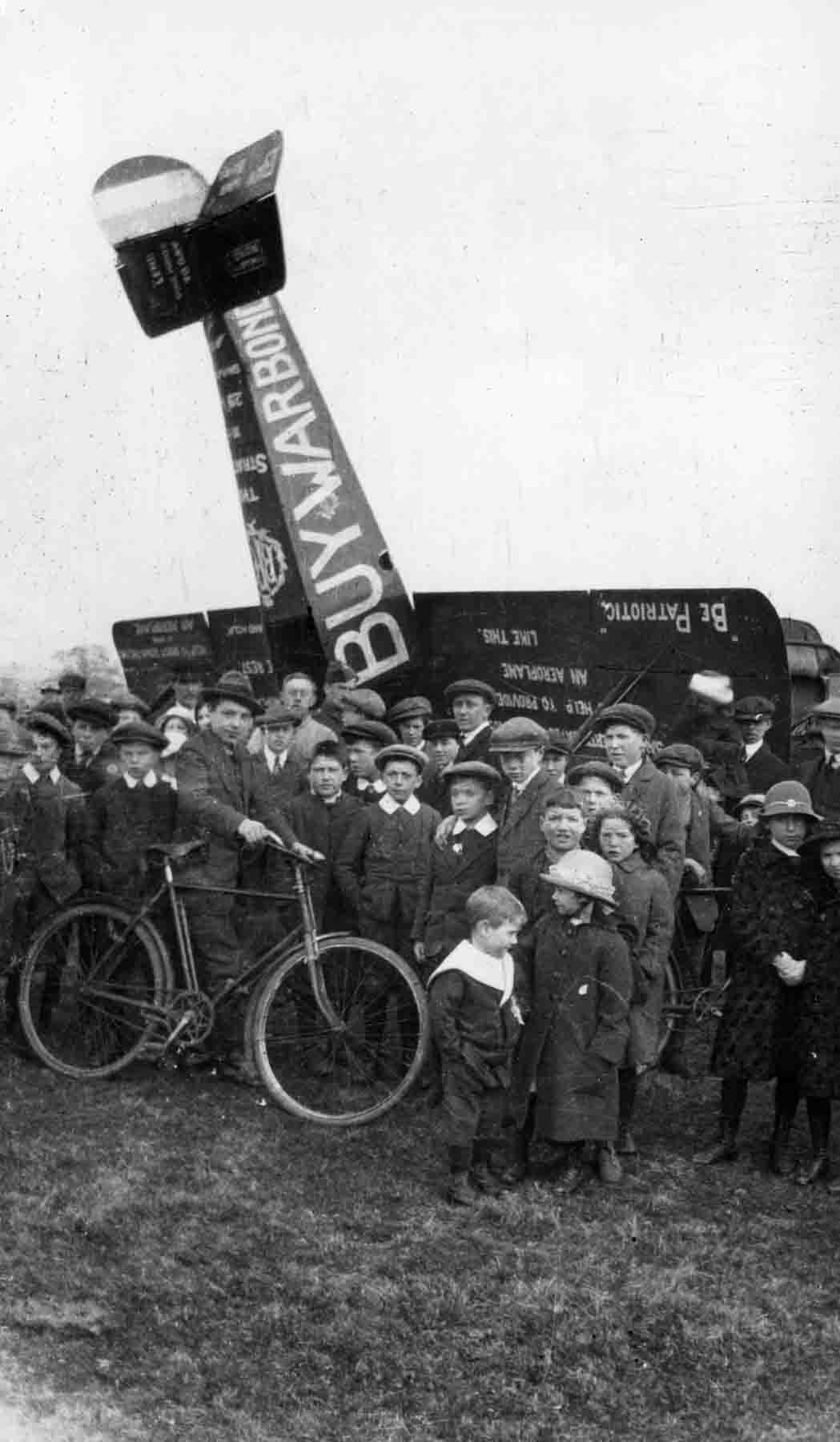 Camels were produced in a number of variants. The most widely-produced after the standard F.1 was the 2F.1, a navalised version intended for use from a variety of vessels. The fuselage was made in two sections, which could be separated for stowage aboard ship while the mainplane centre section, and thus the overall wingspan, was reduced. The 2F.1 Camel was embarked upon a number of dreadnoughts during 1918 as an anti-airship deterrent and for these duties one Vickers gun was retained and a single over-wing Lewis gun fitted. A 2F.1, flown from a towed lighter in the North Sea by Flight Sub-Lieutenant Stuart Culley, destroyed Zeppelin L53 on 11 August 1918 and seven 2F.1 Camels from HMS Furious attacked the airship base at Tondern on 19 July 1918 in the world’s first carrier-launched air strike. 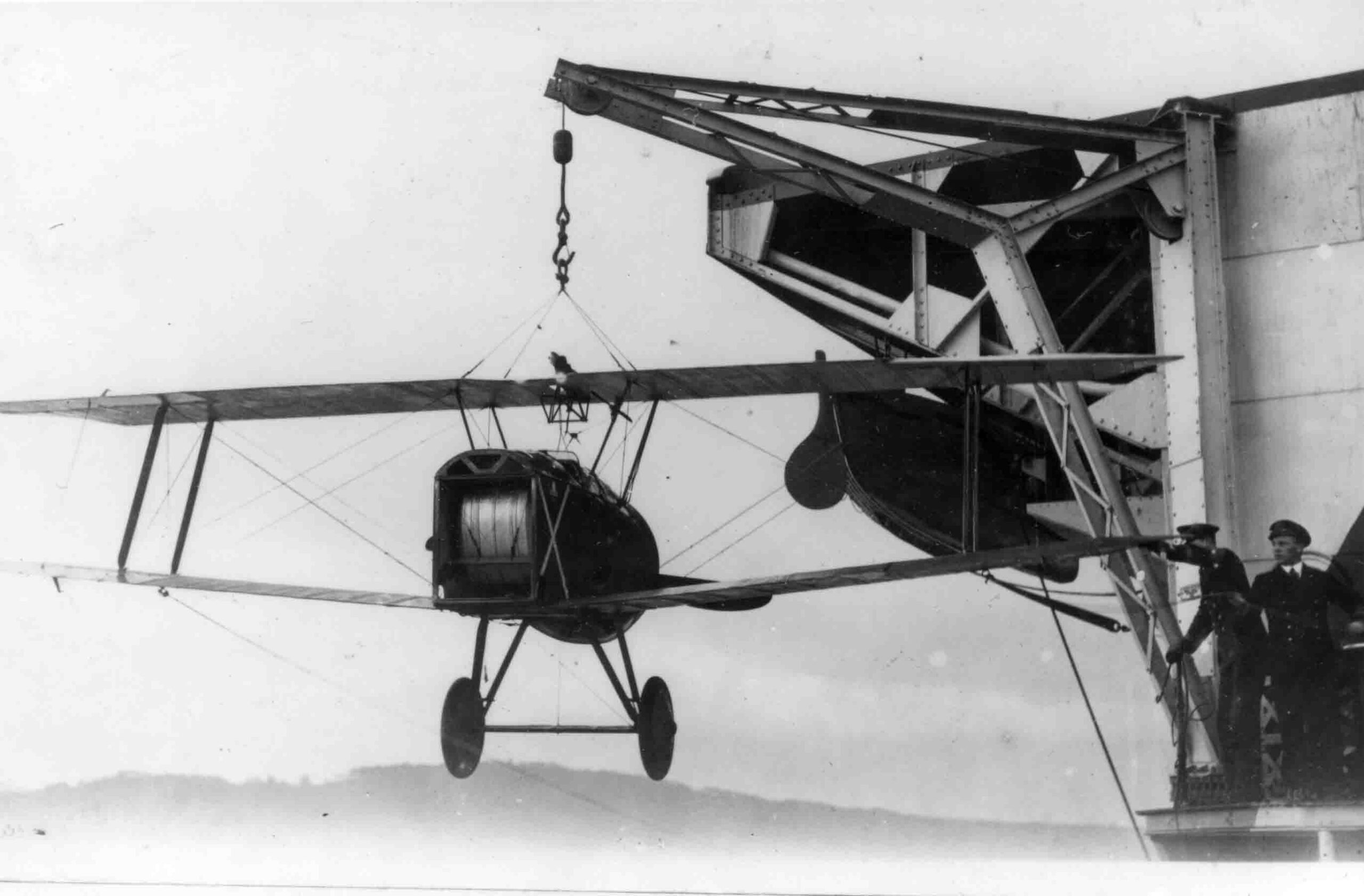 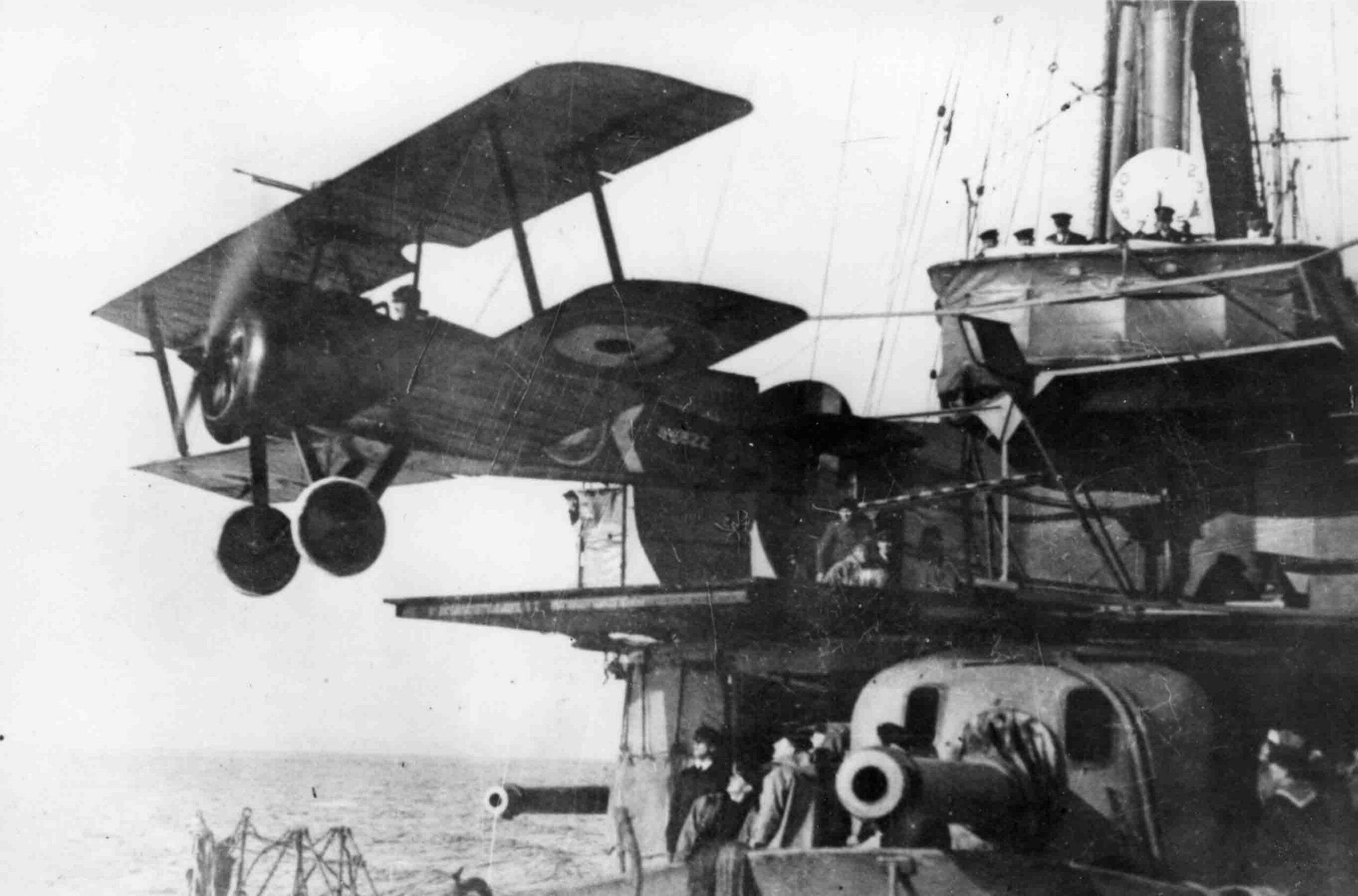 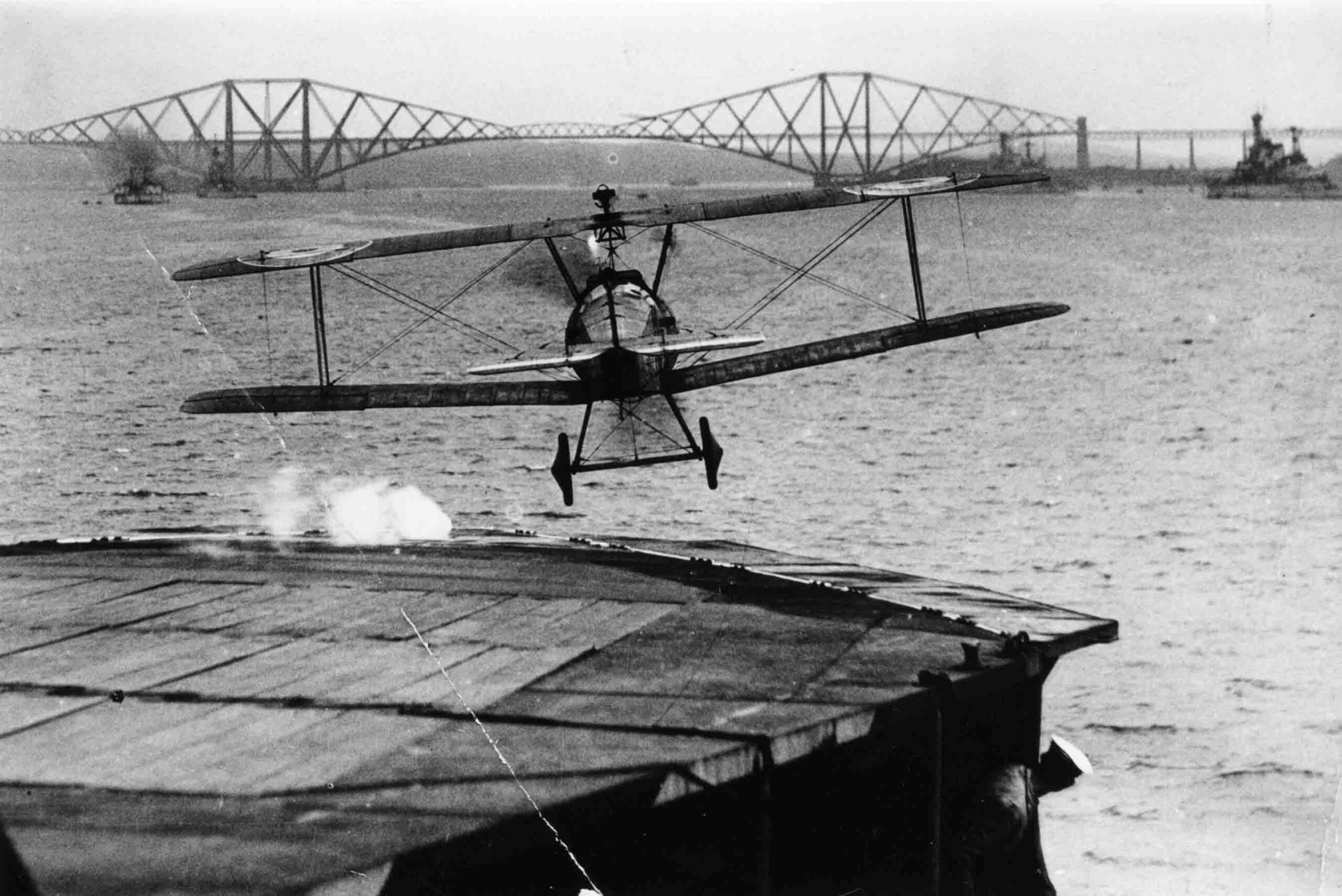 A dedicated night fighter, or “Comic” version, was produced in small numbers and issued to some of the UK’s Home Defence units. Two over-wing Lewis guns replaced the Vickers guns and, to facilitate reloading, the cockpit was moved aft by about a foot, while the fuel tank was moved forward to compensate. These ungainly aircraft did not distinguish themselves during their service careers. 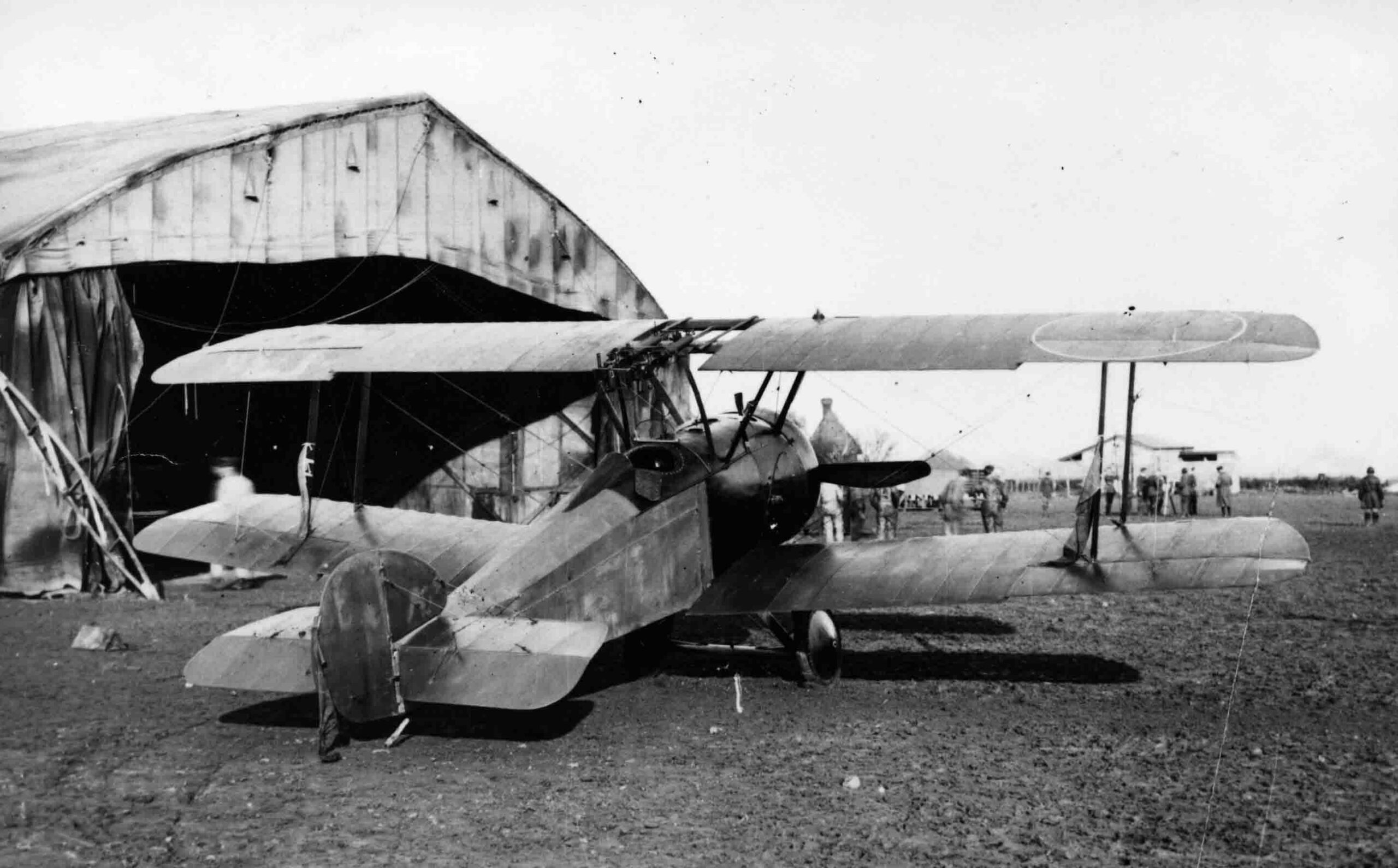 Many Camels were issued to training units, where, Jack Bruce wrote, “they acquired a sinister reputation…inexperienced pilots were unable to react quickly enough when the fine-adjustment fuel control had to be altered soon after take-off; the faltering engine’s loss of power, if not instantly corrected, could lead to a stall and spin at a level too low to permit recovery of control.”[2] As a partial remedy, a small quantity of two-seat instructional versions was produced and some of these are known to have been used by training units during 1918.

The heavy casualties incurred by squadrons engaged in ground-attack duties led to the design of the experimental TF.1 Camel, which did not go into production but influenced the development of the Sopwith TF.2 Salamander. Armour was added to the forward part of the aircraft and two Lewis guns were fitted at a downward angle. “TF” stood for “Trench Fighter”. 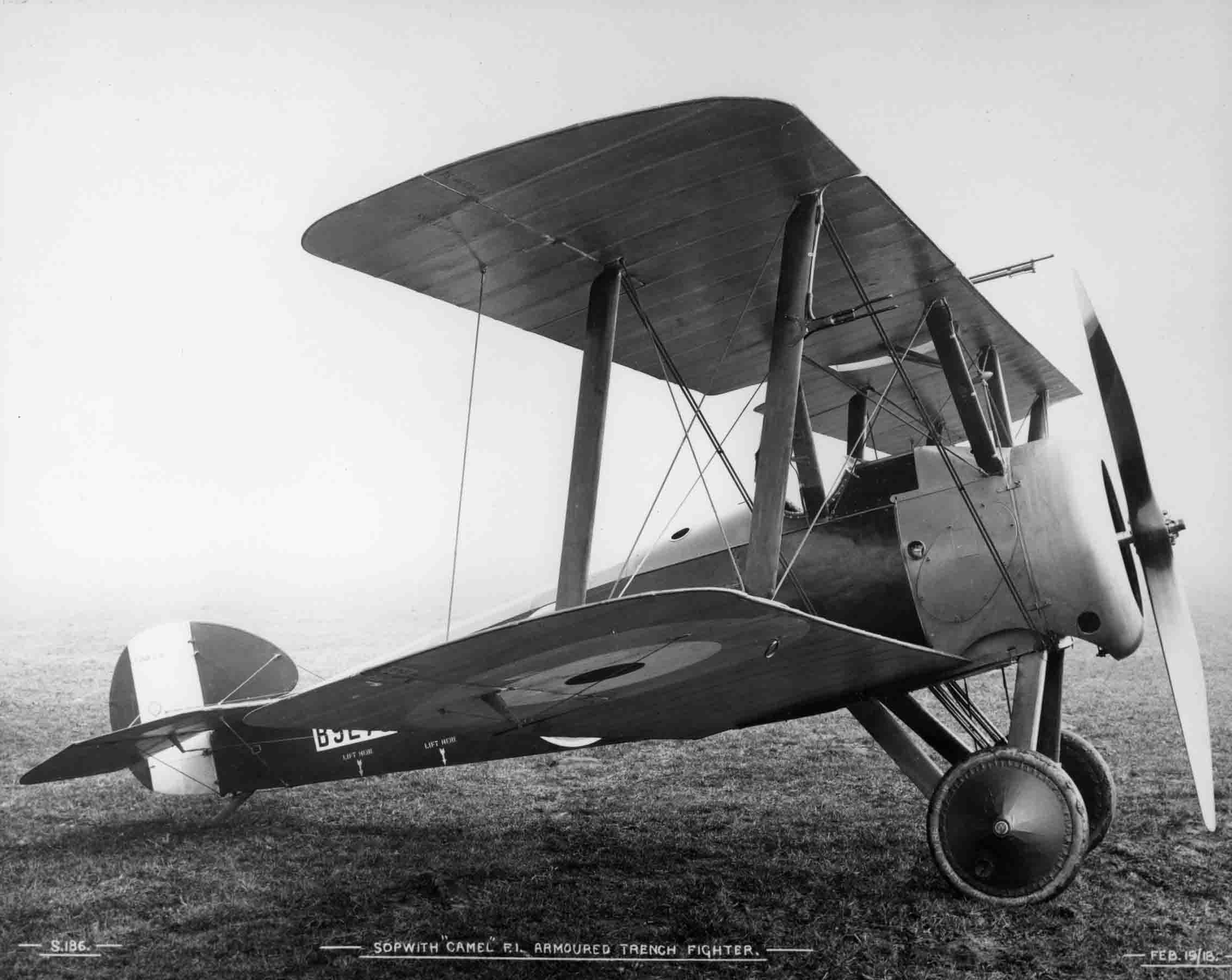 Sopwith Camels were supplied to the Belgian Air Force in 1918 and used by several of that country’s aces. Two squadrons of the United States Army Air Service, attached to the RAF, were equipped with the Camel in 1918.

Total production came to 5,490 Camels of all types. 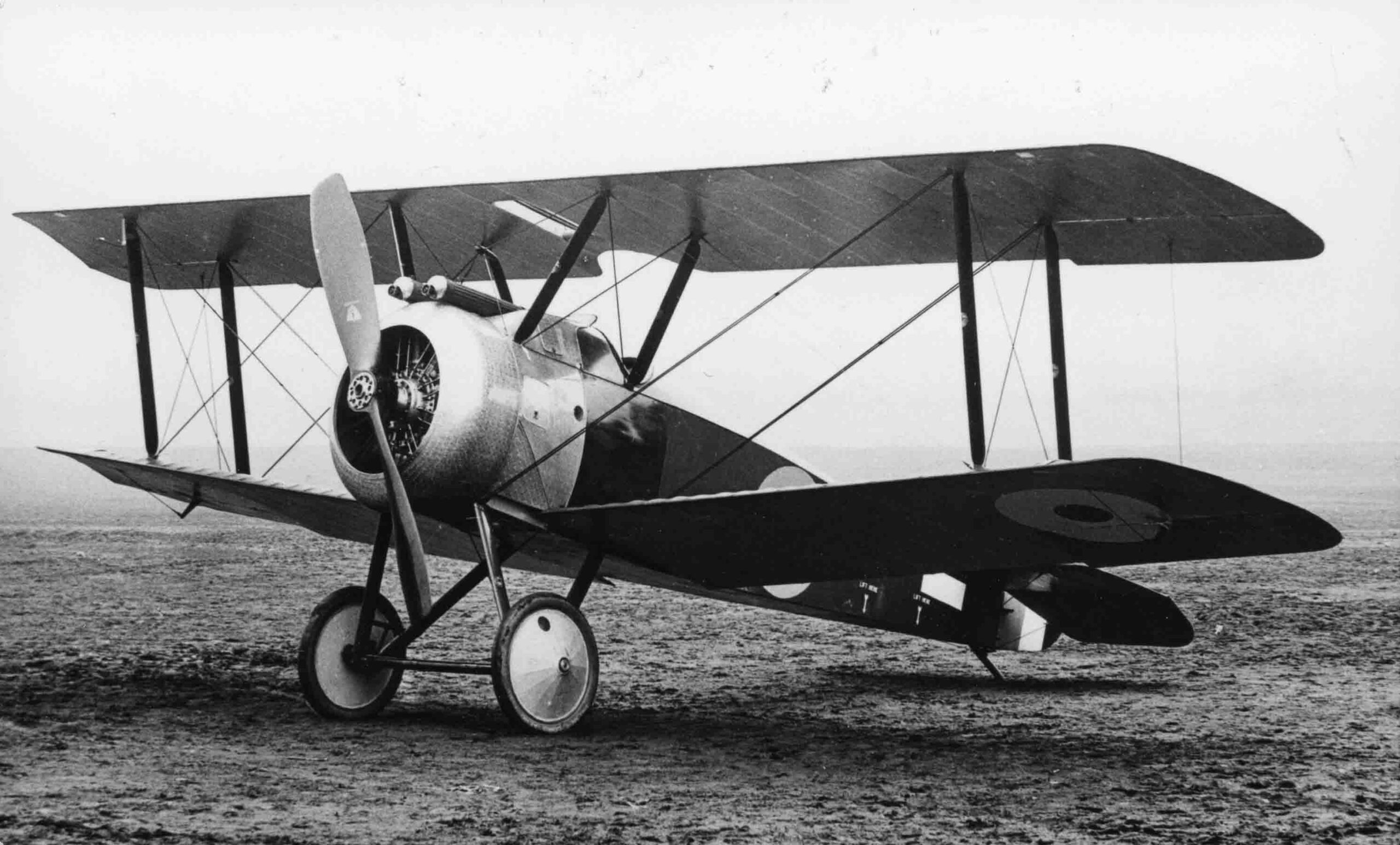 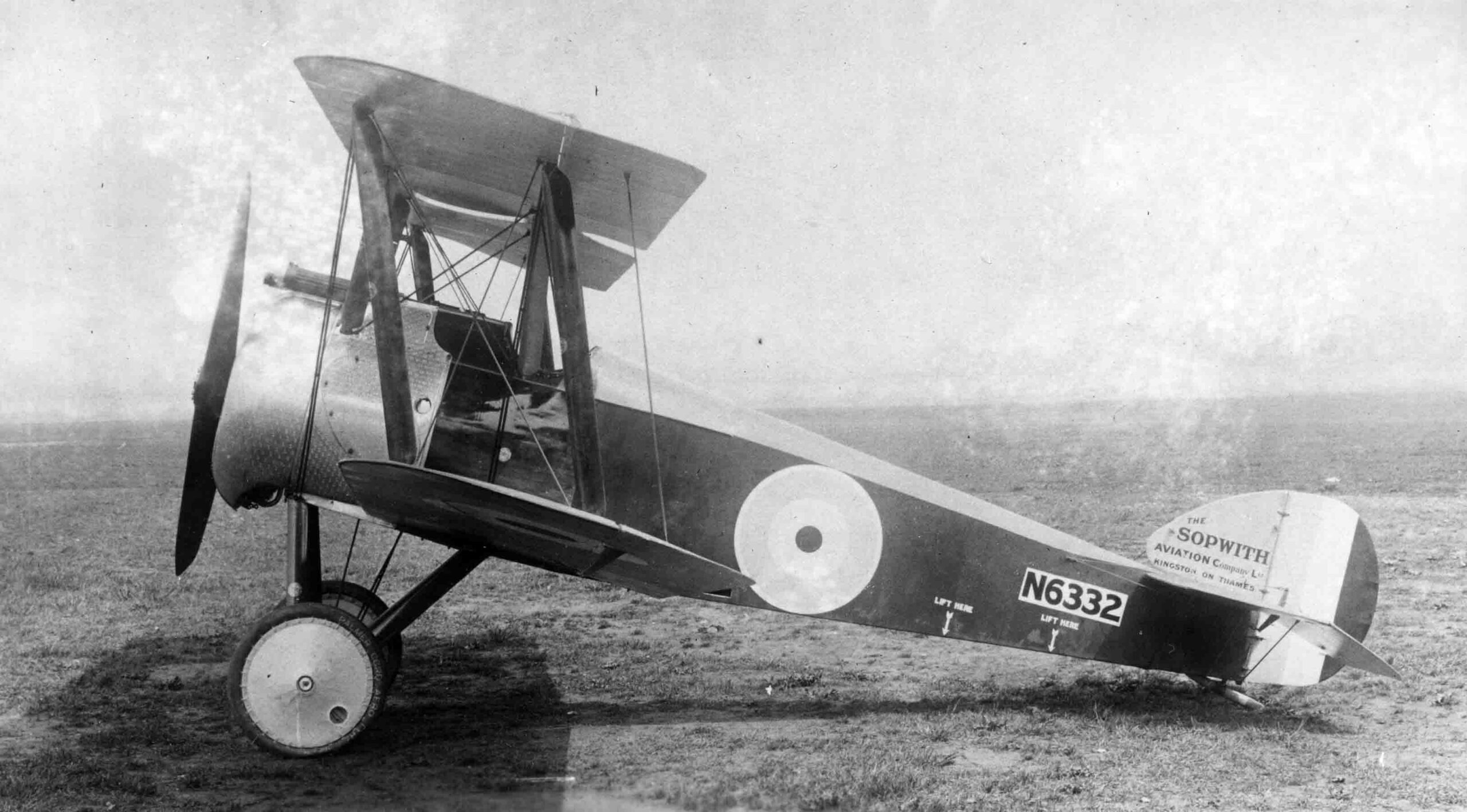 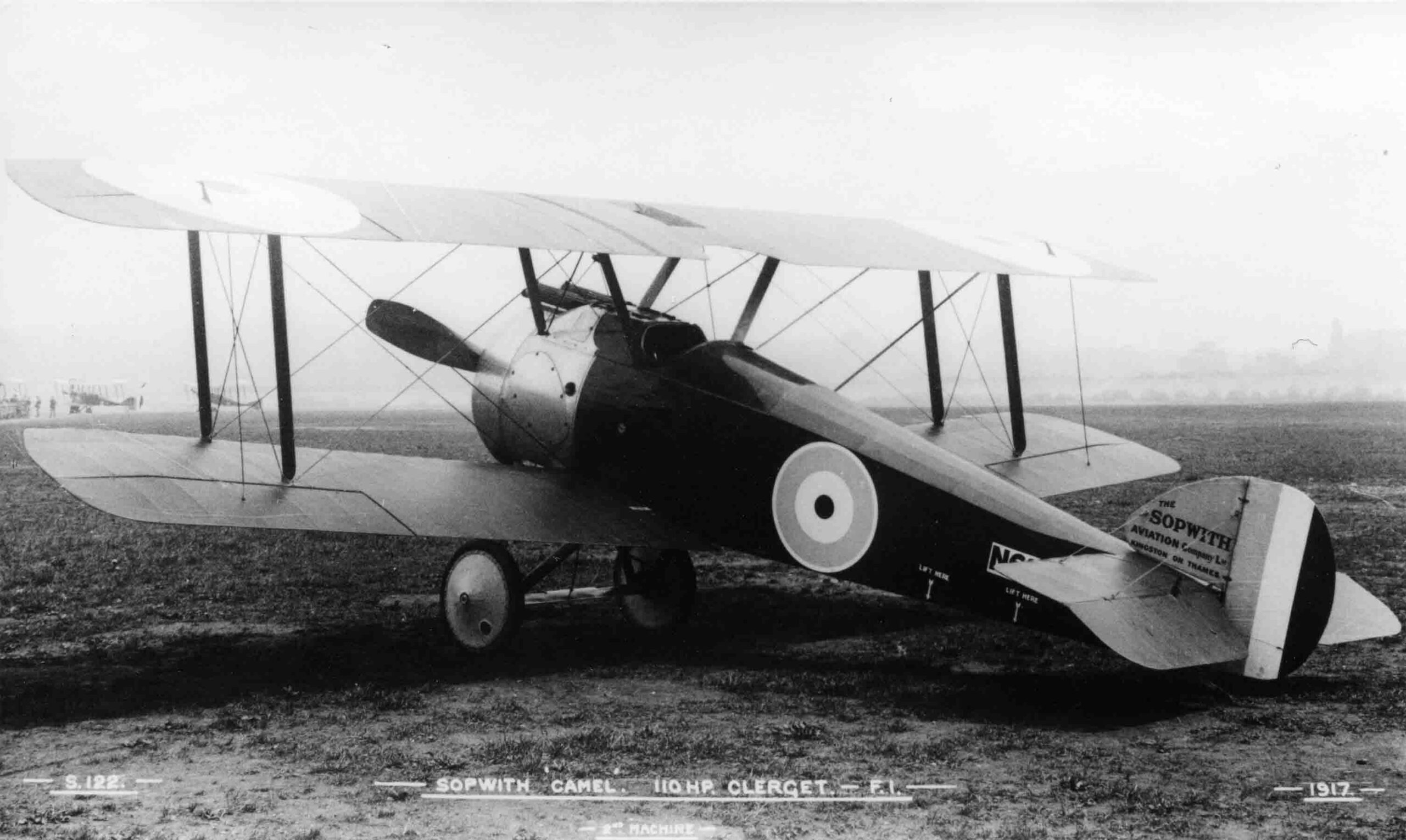 The first prototype of what became known as the Sopwith Dolphin emerged from the Sopwith works in May 1917 and was quite unlike any previous Sopwith aircraft. The raisons d’etre of the design were the installation of the powerful 200hp Hispano-Suiza V8 engine and the decision to position the upper wing level with the top of the fuselage, a feature which gave the pilot a completely unobstructed view in the upper hemisphere. To maintain the relationship between lift and centre of gravity, the lower wing was placed forward of the upper, resulting in the Dolphin’s characteristic negative stagger. 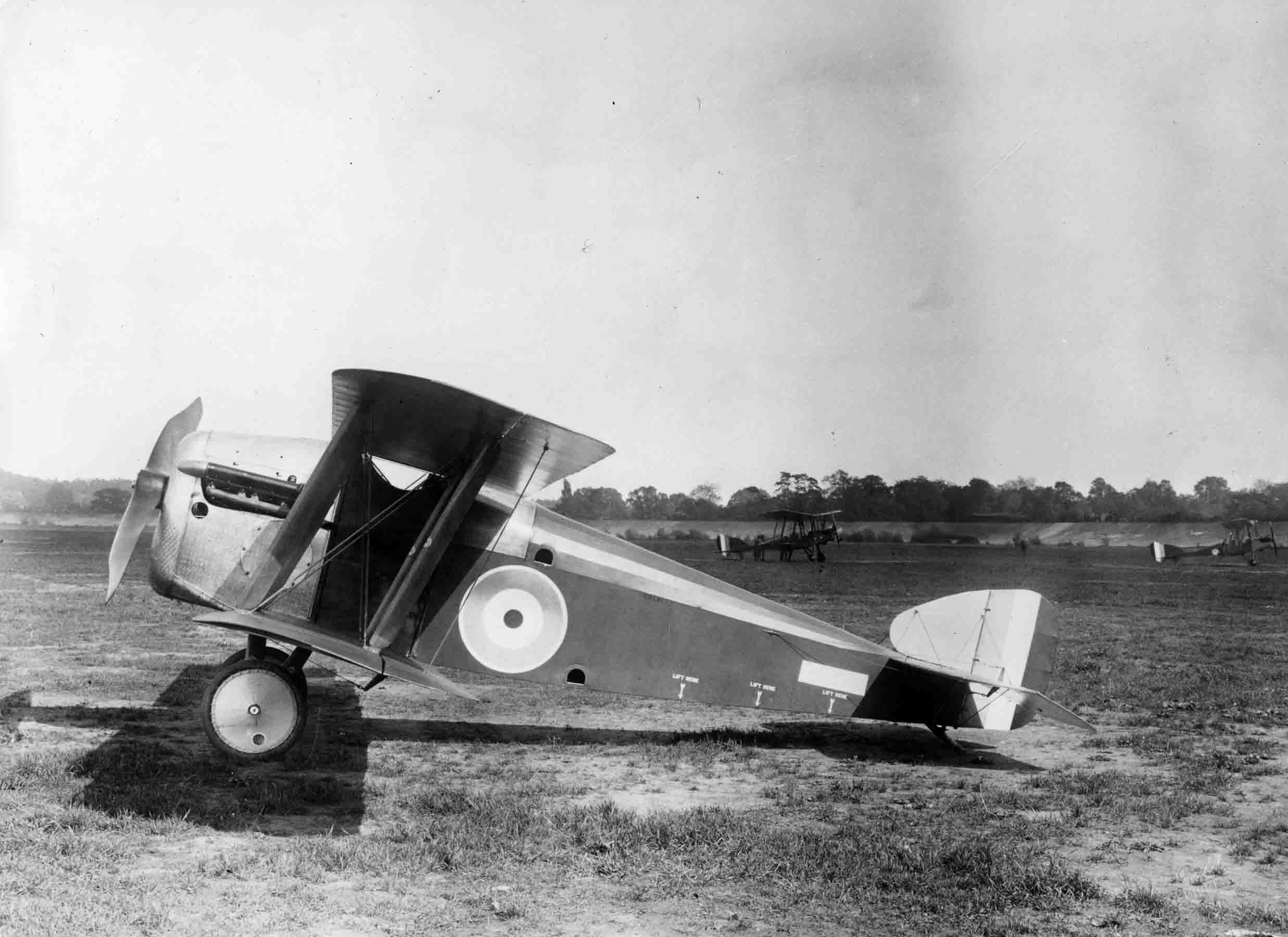 That the view downwards was considered insufficient is proven by the various modifications made to the succession of prototypes which appeared during 1917. For this reason, the Dolphin briefly sported cut-outs in the lower wing roots before a lowered rear fuselage decking, with deep cut-outs to the cockpit sides, was eventually chosen. The tall frontal radiator was abandoned after the first prototype and an attempt to mount the radiators on the upper wing was similarly unsuccessful; it was quickly decided that small block-type radiators, mounted on either side of the forward fuselage, were sufficient. Meanwhile, the tail assembly was successively enlarged and a balanced rudder fitted. During its development, the aircraft gained a mounting on the cockpit for two Lewis guns, supplementing the two Vickers guns already installed, possibly stemming from an early interest shown in the type by the Admiralty as a potential Home Defence aircraft. Although this feature was retained on production aircraft, most units in the field removed one or both of the Lewis guns. The fourth prototype, virtually a production-standard aircraft, was tested by the pilots of 19 Squadron; the subsequent report enthusiastically stated: “the machine itself seems to handle perfectly at all heights… [and] is very stable…The view is perfect and the machine easy to fly…Twelve pilots of this squadron have flown it; they all handled it satisfactorily and were delighted with the machine…” 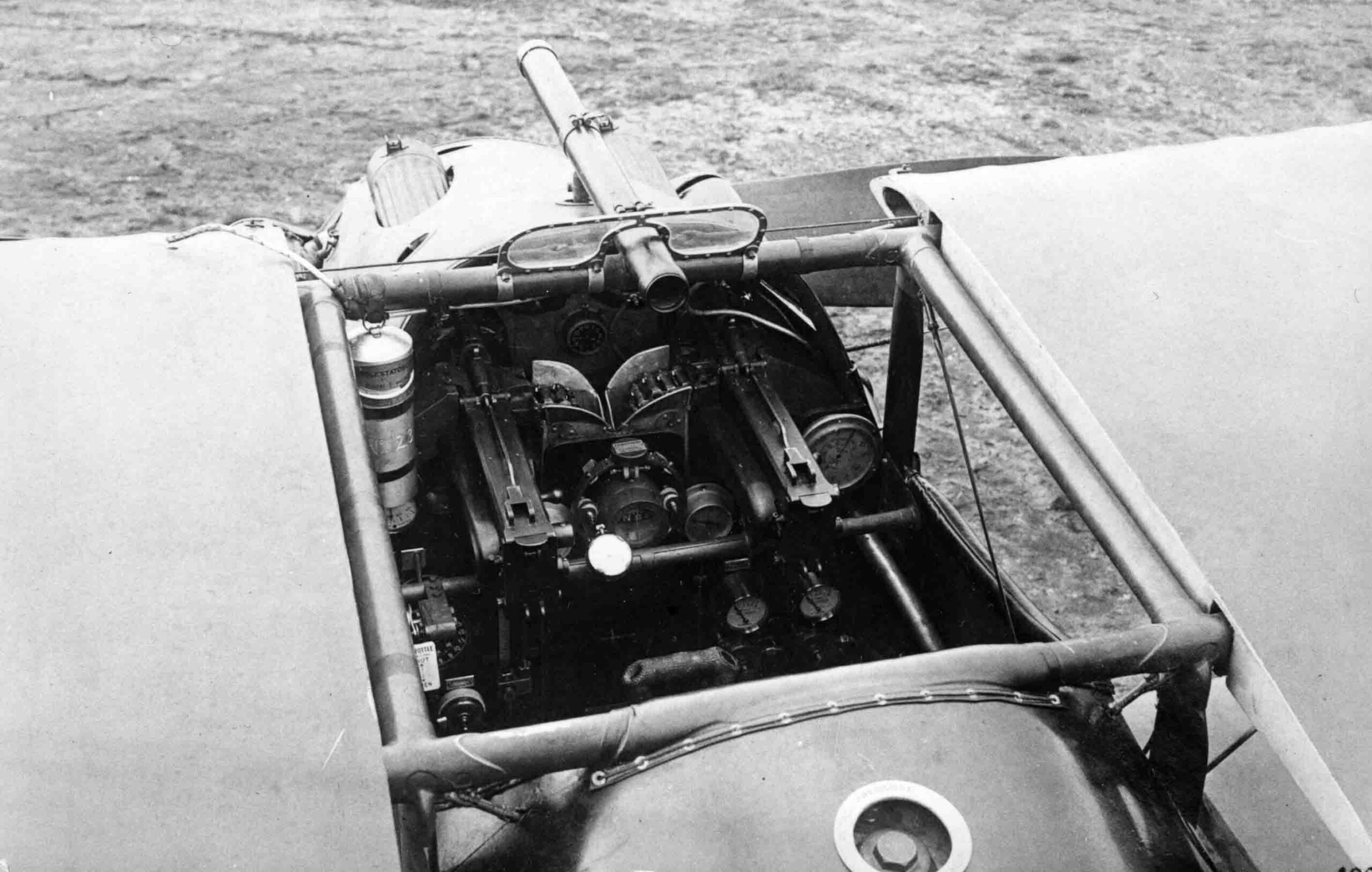 Production of 500 Dolphins was ordered while the aircraft was undergoing tests in the summer of 1917 and further batches were ordered from Darracq and Hooper. However, the Ministry of Munitions rightly noted in March 1918 that “this type is affected by the shortage of Hispano-Suiza engines in the same way as the SE5 [sic].”

During late 1917, the pressure on Hispano-Suiza engine production increased. The engine was required for the SPAD XIII, the S.E.5a and the new Dolphin. Adding to the list of problems was the seemingly endless trouble suffered by licensed manufacturers of the engine, much of which revolved around the reduction gearing and airscrew shaft, which on the engines produced by some manufacturers, particularly Brasier, was found to be too soft. S.E.5a and Dolphin production was badly stymied by this, with airframes lying around in the UK waiting for engines. Meanwhile, Wolseley was having difficulty in producing its own version of the geared Hispano, the Adder, for the S.E.5a and it would be some months before an adequate supply of these powerful engines was available. A solution lay in removing the reduction gear altogether from the Hispano and, although this reduced the performance of the aircraft in which it was fitted, the “RAF in France evidently considered this price worth paying in order to have reliability.”[3] This aircraft, which entered service late in the war, became known as the Dolphin Mk. III.

A French development of the Dolphin (the Dauphin), intended for the Aéronautique Militaire and the United States Army Air Service, was fitted with the 300hp direct-drive Hispano-Suiza 8Fb. This version was known as the Dolphin Mk. II and was distinguished by somewhat bulbous nose contours. However, only a few were produced by SACA (Société Anonyme des Constructions Aéronautiques) before the war ended. Although there was some British interest, the pressure on Hispano-Suiza production precluded any hope of the RAF ordering the type. 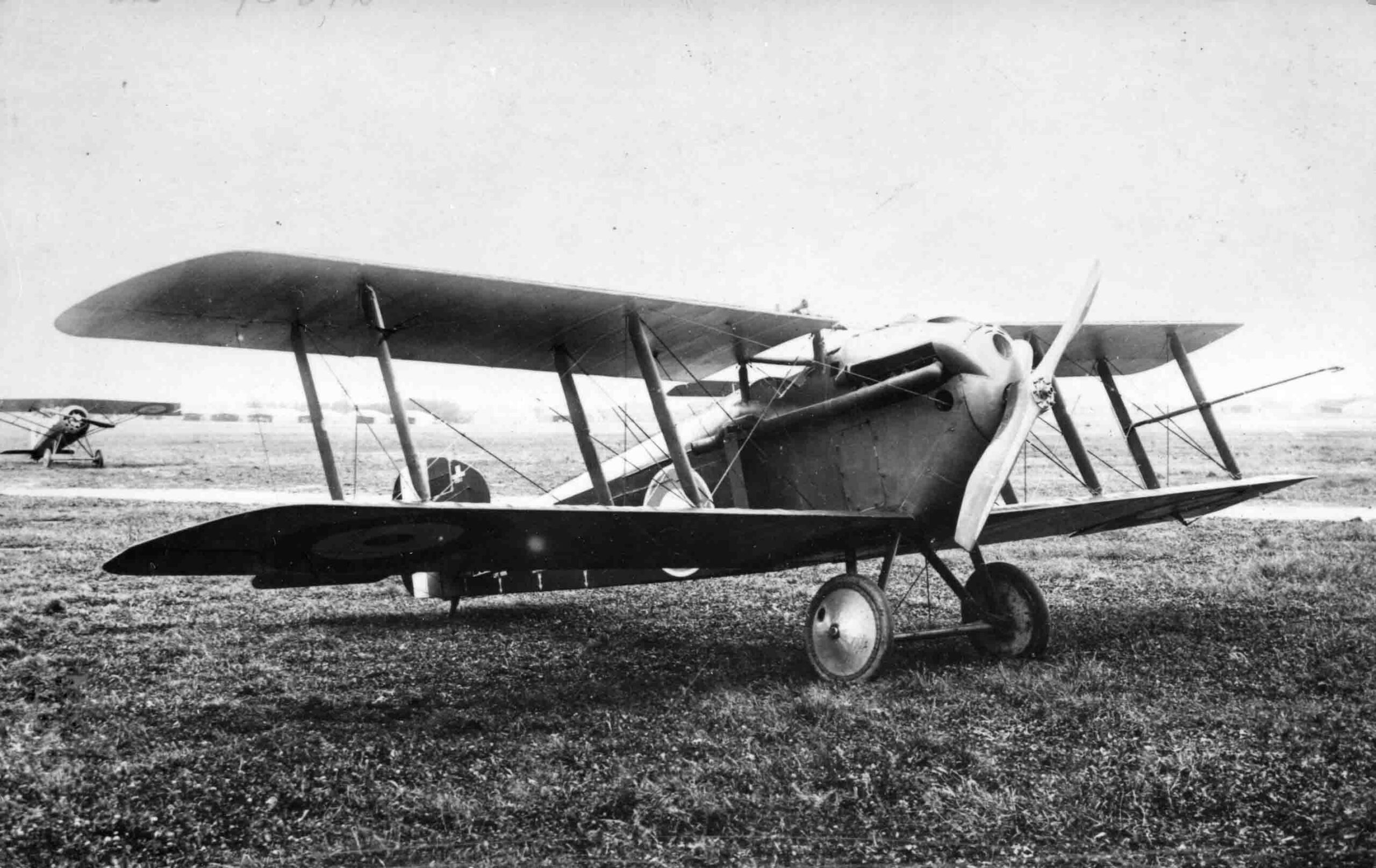 The Dolphin equipped 19, 23, 79 and 87 Squadrons on the Western Front in 1918 and won many admirers thanks to its stability, speed and manoeuvrability. Flt Lt (later Air Chief Marshal) Leslie Hollinghurst wrote that “…the Dolphin was easy to fly and was strong and manoeuvrable. The pilot had an excellent view and, in my view, it was one of the best war machines ever built.” [4] 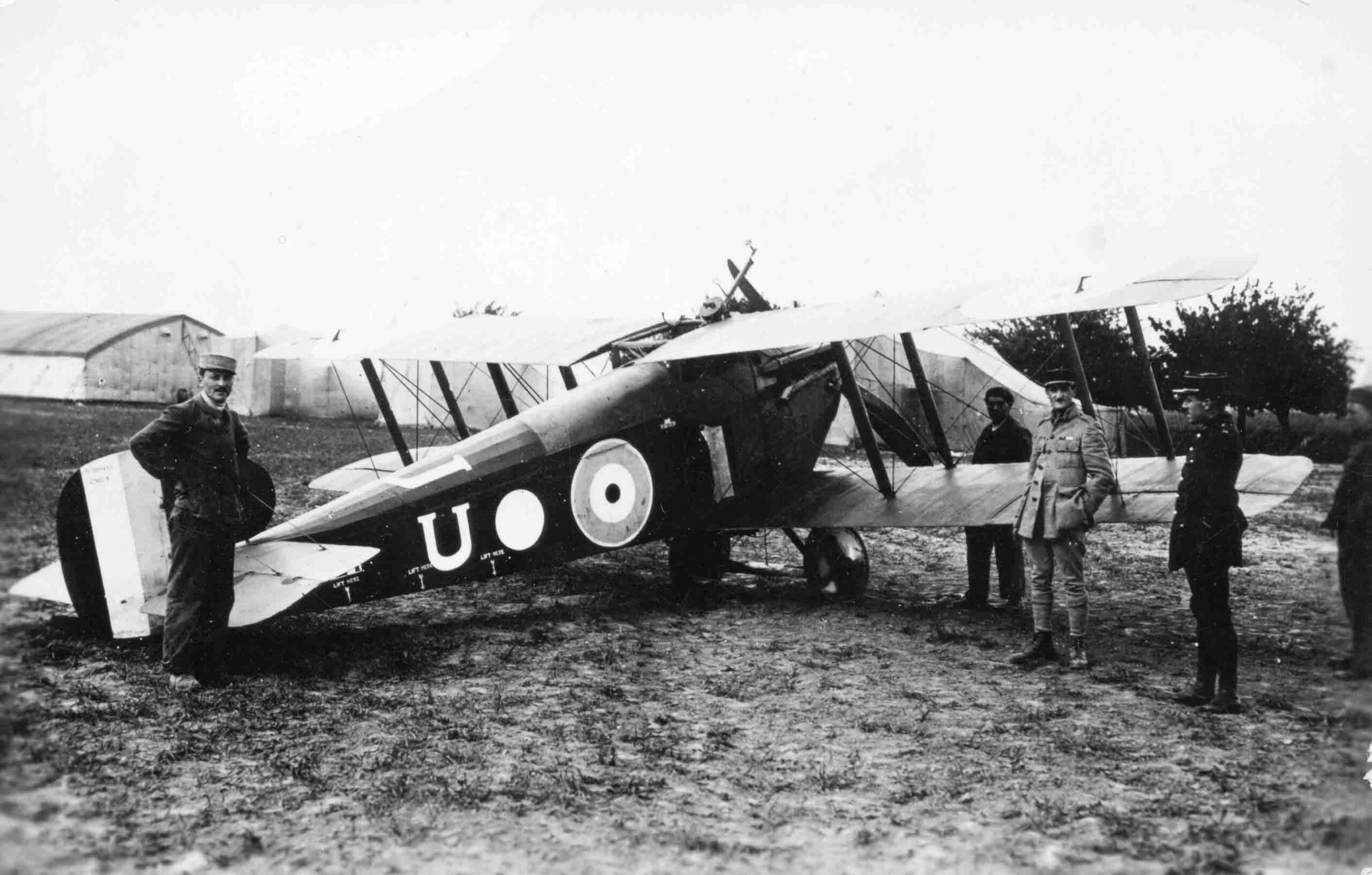 The Dolphin did not gain acceptance as a Home Defence fighter, due largely to the time (approximately 20 minutes) needed to warm the Hispano Suiza engine, which precluded a quick “scramble.” A further disqualification was the largely erroneous belief that the Dolphin would turn over on to its back in a crash landing, which, if not killing or injuring the pilot, would prevent him from escaping and much time and effort was put into devising a pair of curved steel hoops above the cockpit. In fact, the type’s centre of gravity meant that it rarely assumed this position and instead merely buried its nose into the ground. However, although a number of Dolphins flew with training units in the UK, Hollinghurst noted that the type earned an undeserved reputation for stalling quickly, with the result that the Dolphin did not earn the complete confidence of trainee pilots.

The Dolphin did not enjoy a long post-war career: aircraft of 79 Squadron served at Bickendorf until July 1919 and it remained in production until August 1919. The RAF did not declare the Dolphin obsolete until September 1921.

A few Dolphins served with the Polish Air Force in the war with Russia in 1920-1921.

Total British production came to 1,774 Dolphins of both types. 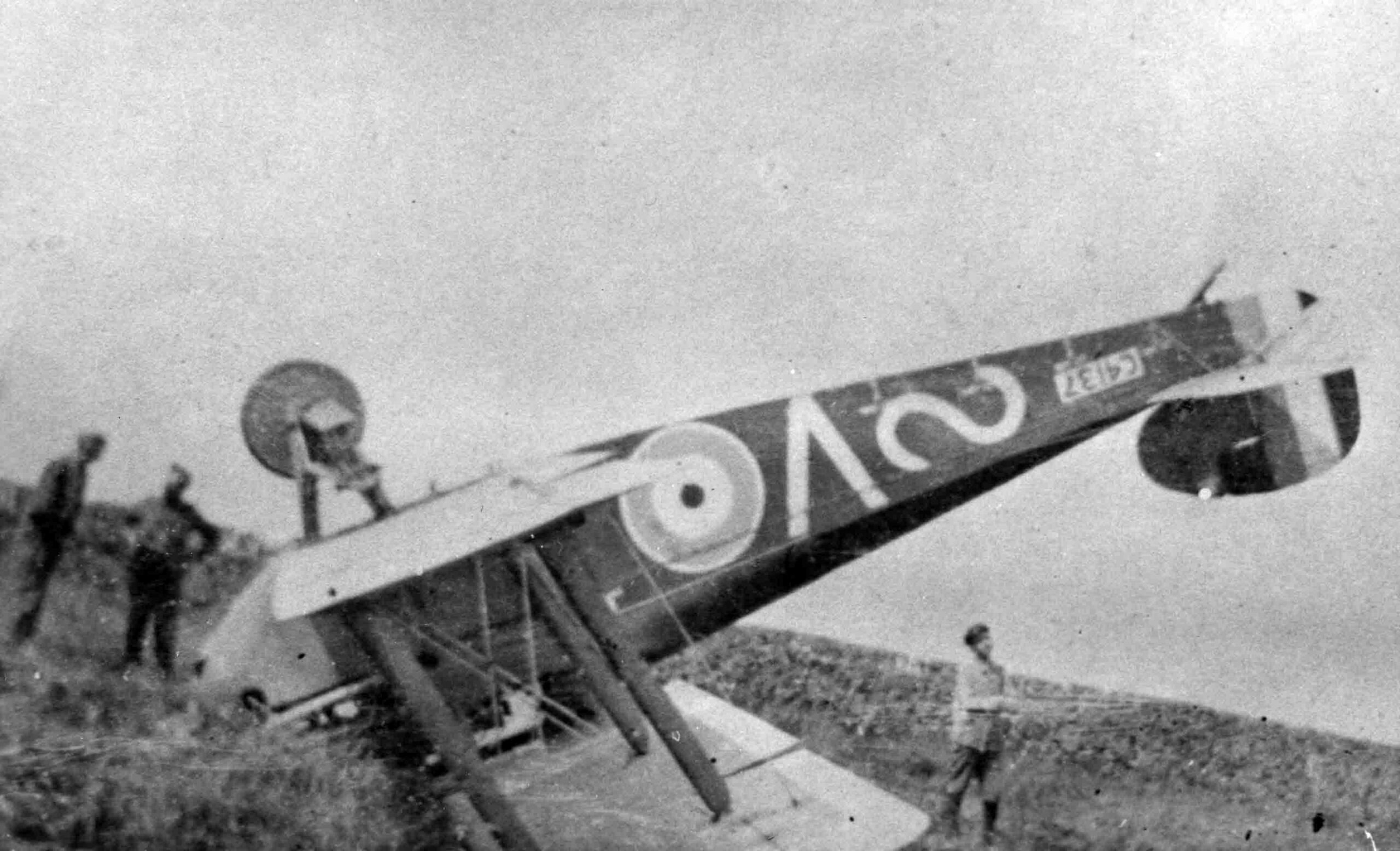 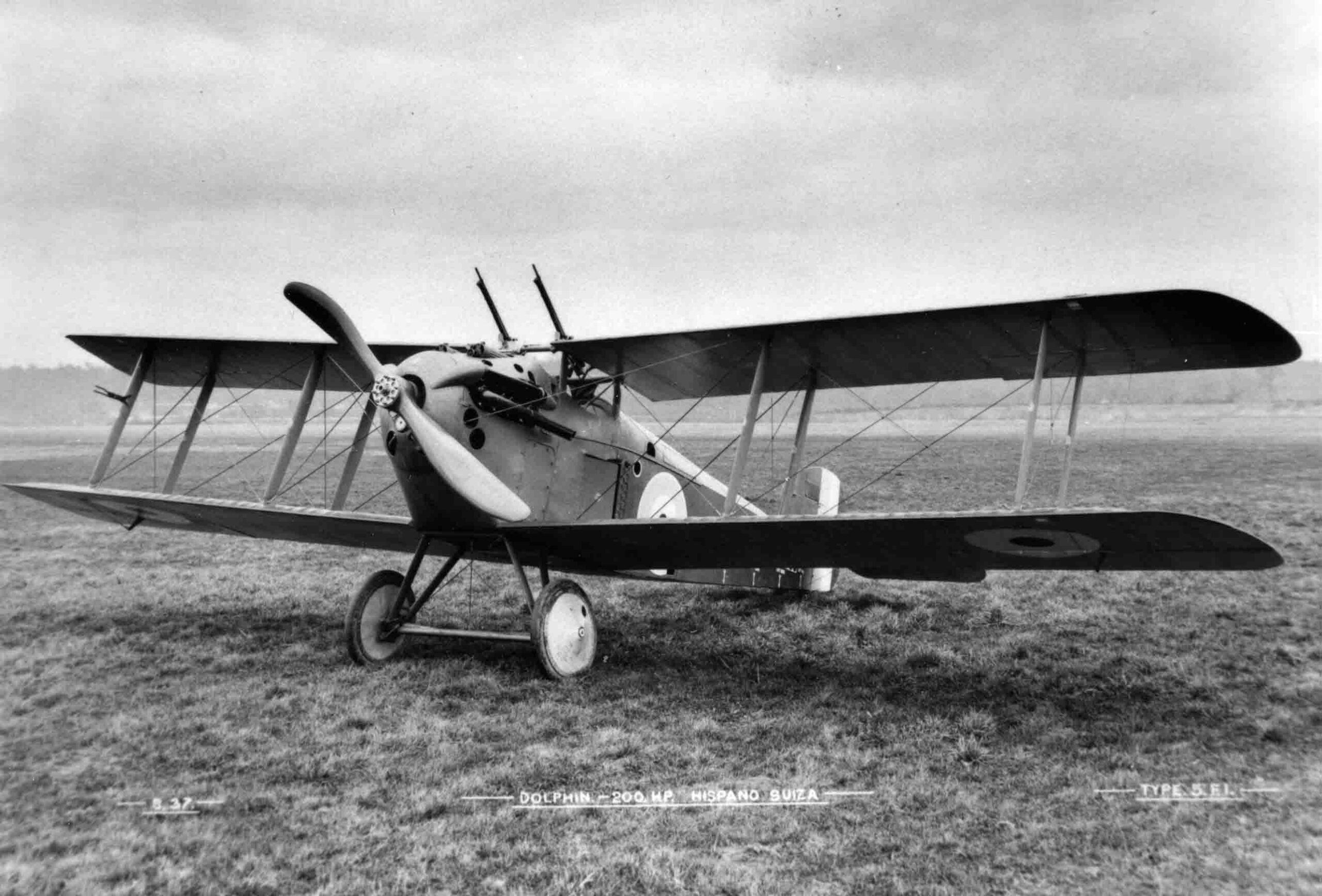 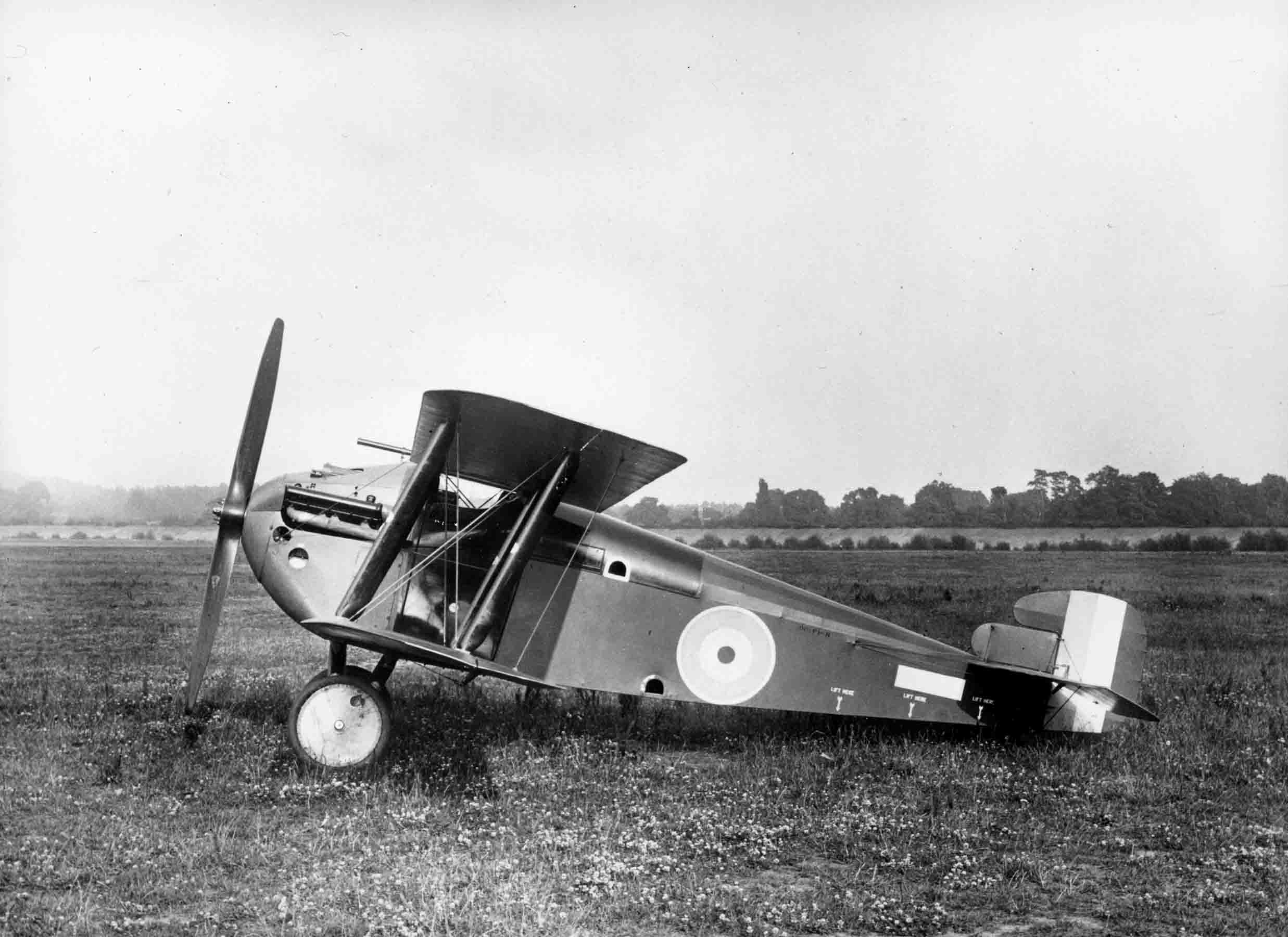 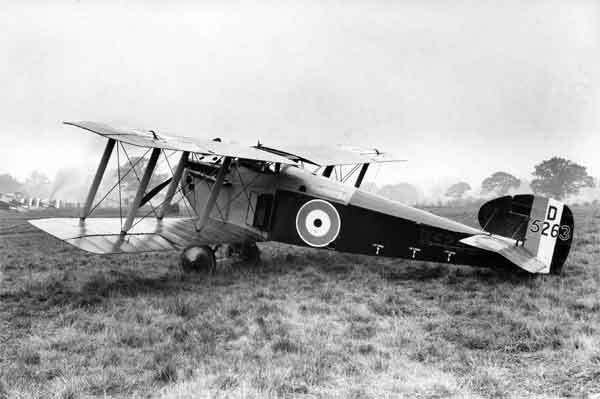