Cheshire and the Bomb

‘Both the man of science and the man of action live always at the edge of mystery, surrounded by it.’
J Robert Oppenheimer

In July 1944, Group Captain Leonard Cheshire DSO, and two bars, DFC, was retired from flying having logged a record 102 operations as a pilot with RAF Bomber Command. On 8 September, he was awarded the Victoria Cross, not for an individual act of gallantry, but in recognition of his courage and outstanding leadership from the summer of 1940. Although by no means a natural pilot, Cheshire quickly mastered every aspect of his trade and every aircraft type he flew. His coolness under fire was legendary, and this, combined with his shrewd judgement and warm sense of humour, made him an excellent skipper. As a commanding officer, Cheshire was compassionate and approachable to all of his men regardless of rank, and he inspired strong personal loyalty. The squadrons he led were efficient and happy. 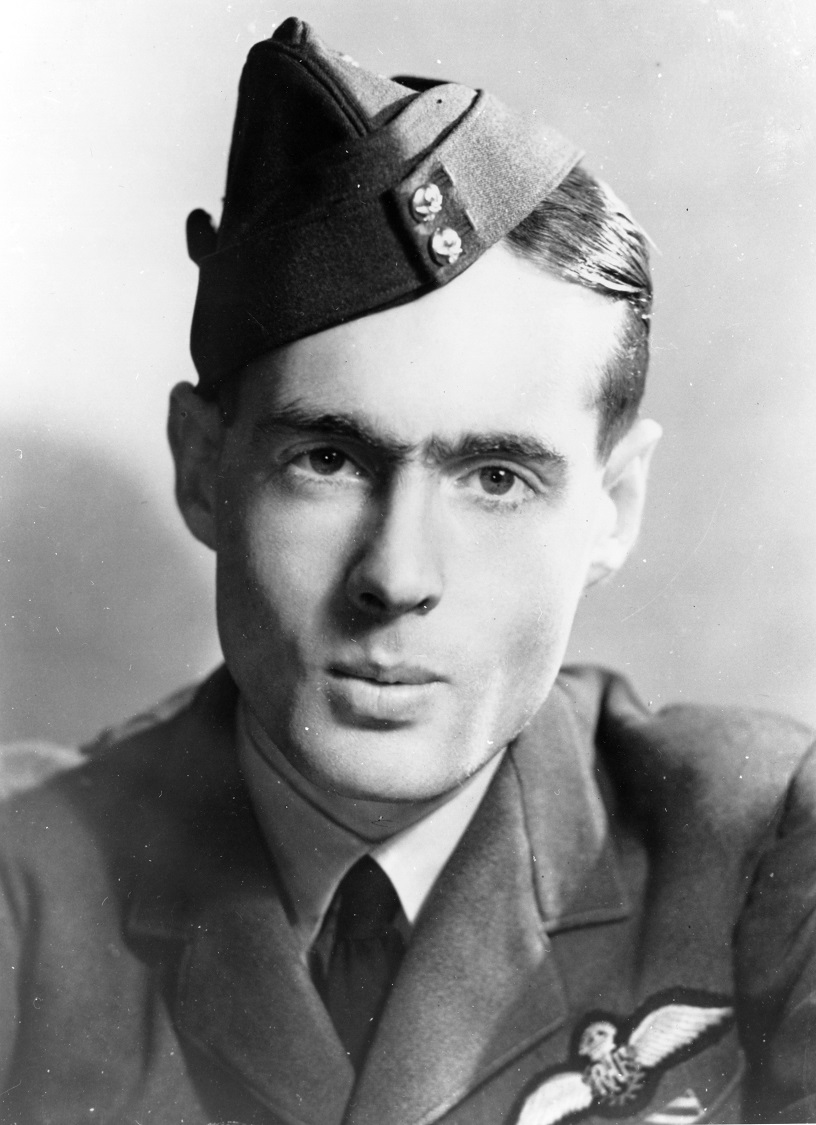 In November 1940, Cheshire, while still a pilot officer, was awarded his first Distinguished Service Order for bombing Cologne in a flak-damaged Whitley and bringing the aircraft safely home. In March 1943, aged 25, he became the RAF’s youngest group captain; but chose to forfeit his rank in November to take command of No. 617 Squadron, the celebrated ‘Dambusters’. Cheshire’s unconventional approach to low-level target marking brought the squadron success; and his fourth operational tour ended with him perfecting the technique at the controls of a Mustang fighter.

In July 1945, Group Captain Cheshire was working dejectedly at a desk job in Washington DC when he was told, in the strictest secrecy, about the $2 billion-dollar Manhattan Project and the creation of the atomic bomb. He was also informed that he had been selected by Prime Minister Winston Churchill to witness the dropping of the bomb on a target in Japan. Cheshire duly set off for the Marianas in the western Pacific, arriving at the huge American air base on Tinian Island at the end of the month.

In the Far East, Japan was embroiled in a bloody, and ultimately futile, war of attrition against the United States and its British Commonwealth and Chinese allies. America’s military and industrial power was by now overwhelming, and over three million Japanese servicemen and civilians were dead. The US Navy’s submarine blockade ensured that food and medicine were in short supply, and Japan’s highly flammable cities lay within range of USAAF B-29 bombers. On the night of 9/10 March 1945, 16 square miles of Tokyo were razed in an incendiary attack that killed at least 80,000 people.

While Allied victory was assured, the war was expected to go on into 1946, and it was clear that an invasion of the Japanese mainland would be costly. American military planners were unable to agree a figure for projected casualties, but half a million Purple Heart combat decorations were stockpiled. In the spring of 1945, Japanese diplomats had begun to extend unofficial peace feelers to the Soviet Union unaware that Stalin had promised (at the Yalta Conference in February) to join the war against Japan by mid-August.

Throughout the war, Japanese rule in Asia was tyrannical and cruel, and it caused the deaths of an estimated 24 million men, women and children. Japan also refused to recognise the Geneva Convention, and the 140,000 Allied servicemen it captured laboured as slaves in appalling conditions. Some 30,000 of these men were executed or died from malnutrition, disease or ill-treatment; and of the 5,102 RAF prisoners, 1,714 lost their lives. Preparations were made for all prisoners to be massacred in the event of an Allied invasion of the Japanese homeland.

It was against this grim backdrop that US President Harry S Truman, attending the Potsdam Conference in Germany, learned of the successful atomic test on 16 July at Alamogordo, New Mexico. Buoyed by the news, Truman, on 26 July, jointly issued the Potsdam Declaration with Winston Churchill and Chinese Nationalist leader Chiang Kai-shek, calling on Japan to surrender or face ‘prompt and utter destruction.’ Kantaro Suzuki, Imperial Japan’s last prime minister, chose to ignore the ultimatum.

At 02.45 am, on 6 August 1945, a B-29 of the USAAF’s 509th Composite Group took off from Tinian bound for Japan . The pilot on the 1,570-mile flight was the unit’s commanding officer, Colonel Paul Tibbets, and the Superfortress was named ‘Enola Gay’ after his mother. The aircraft had ben specially modified to carry a uranium ‘gun-type’ fission bomb, codenamed ‘Little Boy’, and its destination was the city of Hiroshima. Enola Gay arrived over the target, and at 08.15 am, Major Thomas Ferebee, Tibbet’s bombardier, flipped the release switch dropping the device. Little Boy detonated 1,890 feet above Hiroshima; and in an instant 90 per cent of the city was destroyed, and the first of 140,000 people died. Two days later, the Soviet Union responded to news of the attack by invading Manchuria, dashing Japanese hopes of a negotiated peace. On Tinian, meanwhile, preparations went ahead for a second atomic strike.

In the early hours of 9 August, B-29 ‘Bock’s Car’, flown by Major Charles Sweeney, began the long journey from Tinian to Kokura. The aircraft was armed with a plutonium implosion-type bomb codenamed ‘Fat Man.’ Finding the city obscured by cloud, Sweeney set course for the secondary target, the port of Nagasaki, and dropped the bomb at 11.02am. Cheshire, aboard the camera plane ’Big Stink’, witnessed the explosion from 50 miles away:

‘By the time I saw it, the flash had turned into a vast fire-ball which slowly became dense smoke, 2,000 feet above the ground, half a mile in diameter and rocketing upwards at the rate of something like 20,000 feet a minute. I was overcome, not by its size, nor by its speed of ascent but by what appeared to me its perfect and faultless symmetry…‘Against me’, it seemed to declare, ‘you cannot fight.’ My whole being felt overwhelmed, first by a tidal wave of relief and hope – it’s all over! – then by a revolt against using such a weapon.’

Although dropped well off target, the bomb destroyed half of Nagasaki and claimed 70,000 lives. The death toll in Hiroshima was far greater, and the devastation appeared worse, but it later emerged that ‘Fat Man’ had been the more effective device. 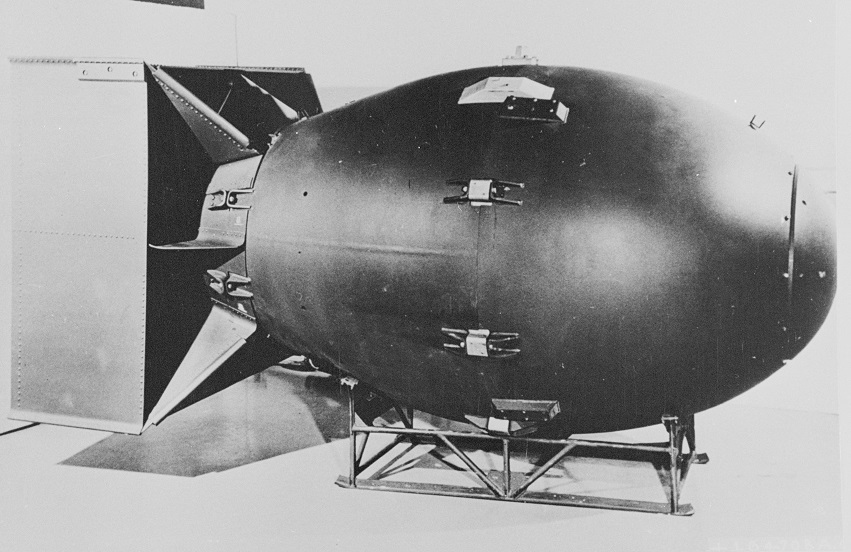 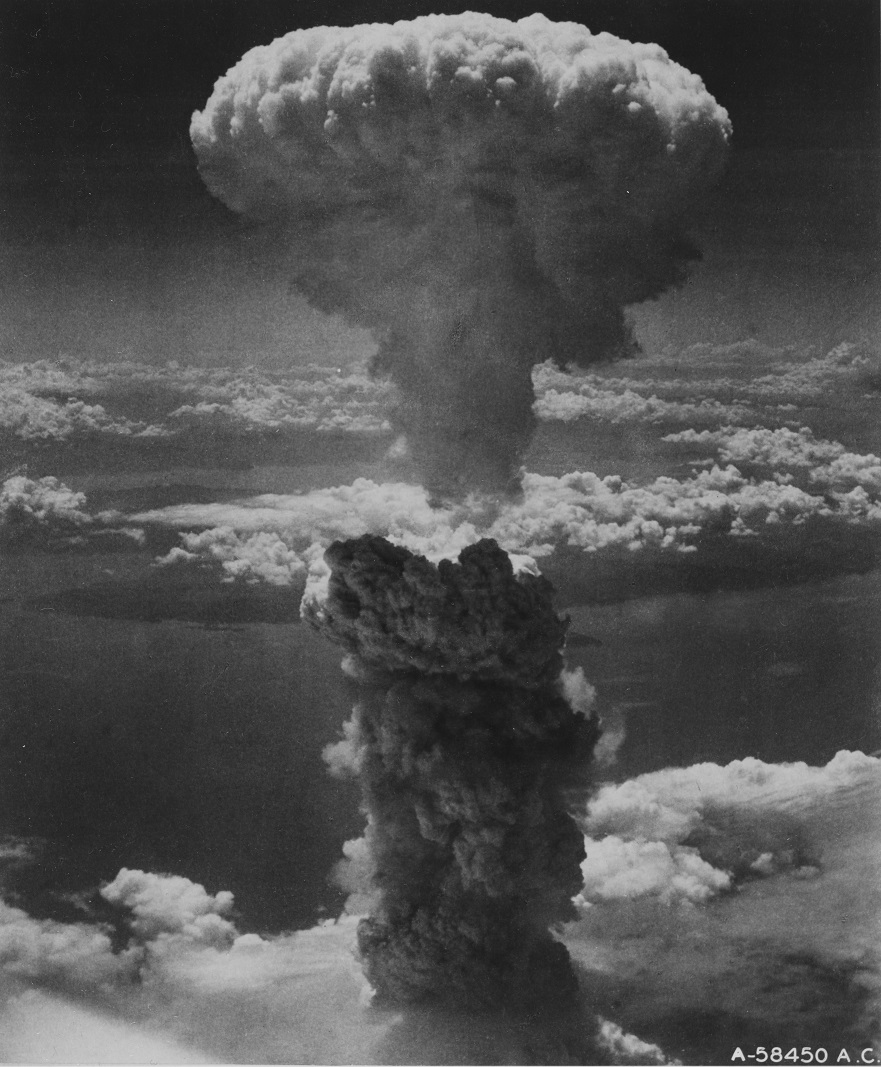 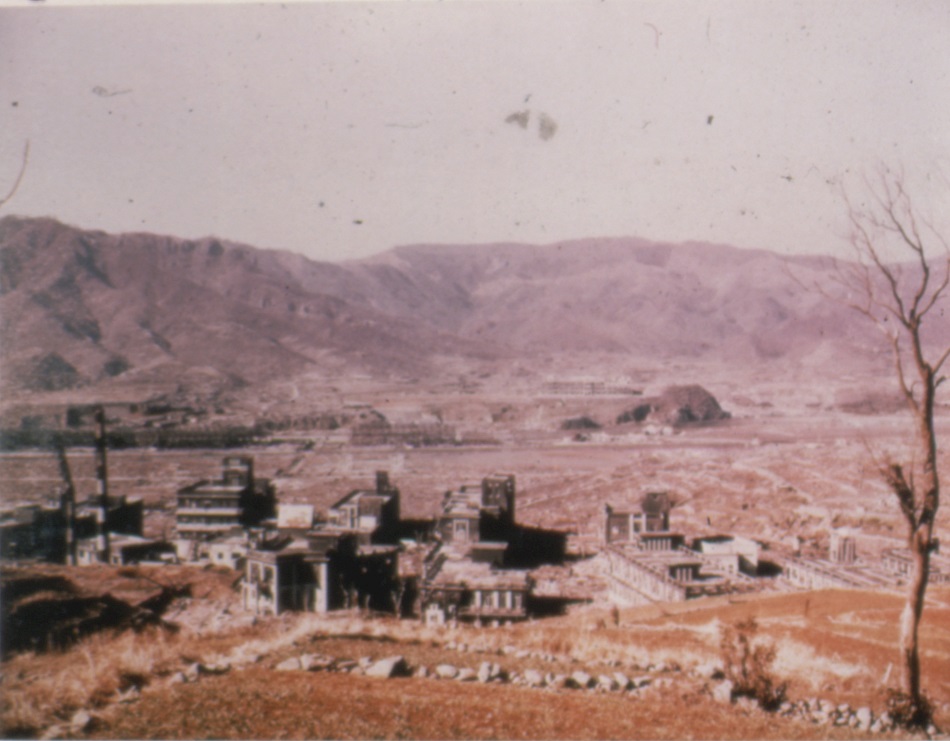 Shizuko Nagae, a young mother, was two miles from the blast:
‘There was a long black line moving slowly downwards…They were burned, wounded people who tried to escape from the fires near the epicentre coming over the mountain. They were almost naked. Their hair stuck together with blood…

…All of the dead bodies were cremated from morning to night every day…The workers collecting bodies on the street just held them by the limbs and threw them into the cart. Their hideously burned hands and feet stuck out of the cart as if they were dolls.’

On 15 August 1945, President Truman announced the surrender of Japan, which had received guarantees that its emperor would remain head of state. The war was finally over, but the ethics and military necessity of the decision to deploy nuclear weapons have been debated by historians, philosophers and spiritual leaders ever since. 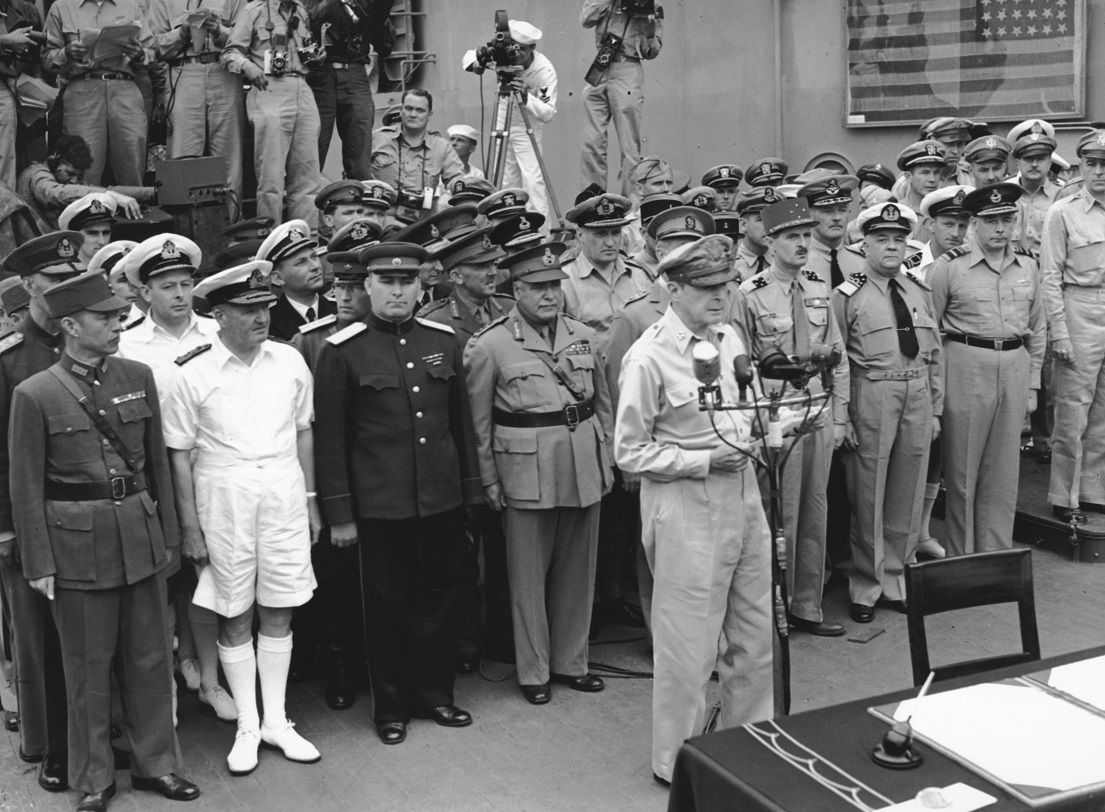 On his return to Tinian, Captain Robert A Lewis, co-pilot on the Enola Gay, wrote in his flight log ‘My God, what have we done?’ Cheshire, however, immediately understood what he had witnessed at Nagasaki and the implications for mankind of the advent of weapons of mass destruction. He also saw that this terrifying new power could be used for good or ill and that nuclear proliferation was inevitable. It was for this reason that he remained a firm believer in deterrence for the rest of his life.

At the end of the year, Cheshire was diagnosed with psycho-neurosis, and he retired from the RAF in January 1946. Restless and unable to adjust to civilian life, he busied himself writing newspaper articles and delivering speeches around the country about the ‘biological necessity’ of maintaining world peace. In February, he gave a broadcast on the BBC in which he said:

‘we are faced either with the end of this country or the end of war… to end war each one of us must play our part…it is not a responsibility we can shelve nor one that we can say belongs exclusively to the government.’

Convinced that peace could be attained through the selfless actions of individuals, he established Vade In Pacem – ‘Go In Peace’ – a community designed to help ex-service personnel integrate into civilian life. ‘VIP’ failed, but in 1948, Cheshire began nursing Arthur Dykes, one of its former members, who was homeless and dying of cancer. Dykes was a devout Roman Catholic, and his influence on Cheshire was so profound that he converted to the faith and was received into the church on Christmas Eve. The bomber veteran went on to nurse several more terminally ill or disabled people, and so began the charity known today as Leonard Cheshire. In 1955, a service was established in Mumbai in India, and the organisation was soon operating world-wide.

The tenth anniversary of the atomic attacks saw the opening of memorial spaces in both cities. Hiroshima’s Peace Memorial Park features the famous ruined Industrial Promotion Hall, or ‘A Bomb Dome’, preserved as it was immediately after the blast on 6 August 1945. The Dome is now a UNESCO World Heritage Site and receives over one million visitors every year. The Nagasaki explosion was commemorated by the unveiling of a 32-feet-tall statue of a seated man praying for peace. A black marble vault below the statue holds a nominal roll of the bomb’s victims, and in 2005, Corporal Ronald Shaw’s name was added to it.

Ronald Francis Shaw of Edmonton, in North London, was captured in 1942 while serving with No. 84 Squadron in Jakarta. Forced to work in an iron foundry in a shipyard, he died on 9 August, at the age of 25, and is buried with 1,800 other Commonwealth servicemen at the CWGC Cemetery at Yokohama. Japanese historian Shigeaki Mori, who survived the Hiroshima attack as a boy, managed to trace Ronald’s family to Leigh-on-Sea in Essex. His relatives gave their blessing to his inclusion on the roll and said they hoped to visit Nagasaki one day.

The epicentre of the Nagasaki bomb was very close to Urakami, the home of the city’s long-established Christian community. The blast wrecked the Roman Catholic Cathedral, and the glass eyes of a statue of the Virgin Mary inside it were destroyed. Her wooden face refused to burn, however, and some members of the congregation consider this miraculous. Shigemi Fukahori, who was 14 years old in 1945, is alive to the significance of Nagasaki’s agony 75 years ago and says simply: ‘I believe the war ended because of our sacrifice.’ 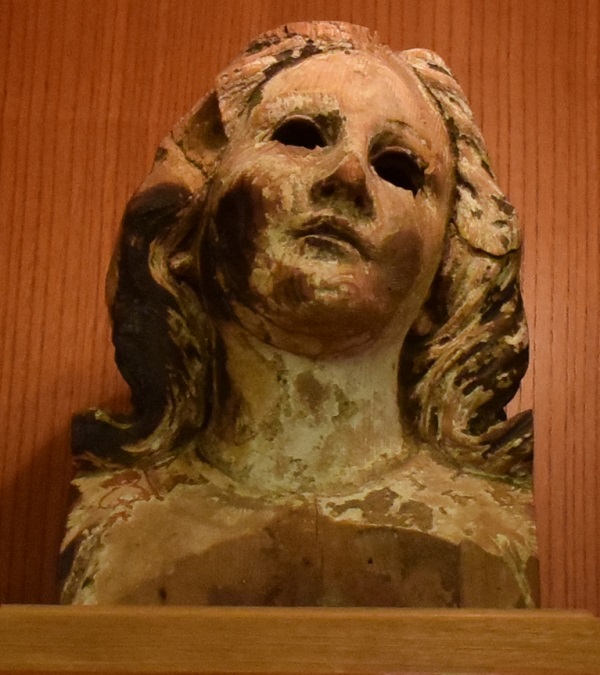 I am indebted to Dr Robert Owen, Official Historian of the No. 617 Squadron Association, for his advice and support.

The National Museum of the Royal Navy, the National Army Museum, the Royal Air Force Museum and the Commonwealth War Graves Commission are joining forces to mark the 75th anniversary of VJ Day and remember the contribution of British Commonwealth forces during the Far East campaign of the Second World War. Discover the campaign’s vast geographical spread, the experiences of individual soldiers – both as combatants and captives – and the impact and legacy of the campaign on the Armed Forces and the wider world. Click here for more information about the programme of online talks and events from Friday 14 to Sunday 16 August 2020