8 May 2020 By Peter Devitt: Curator in Collections Division

‘After all, not a lot of chaps had started the war flying and were still alive and flying at the end.’ Raymond Towers Holmes, 1989 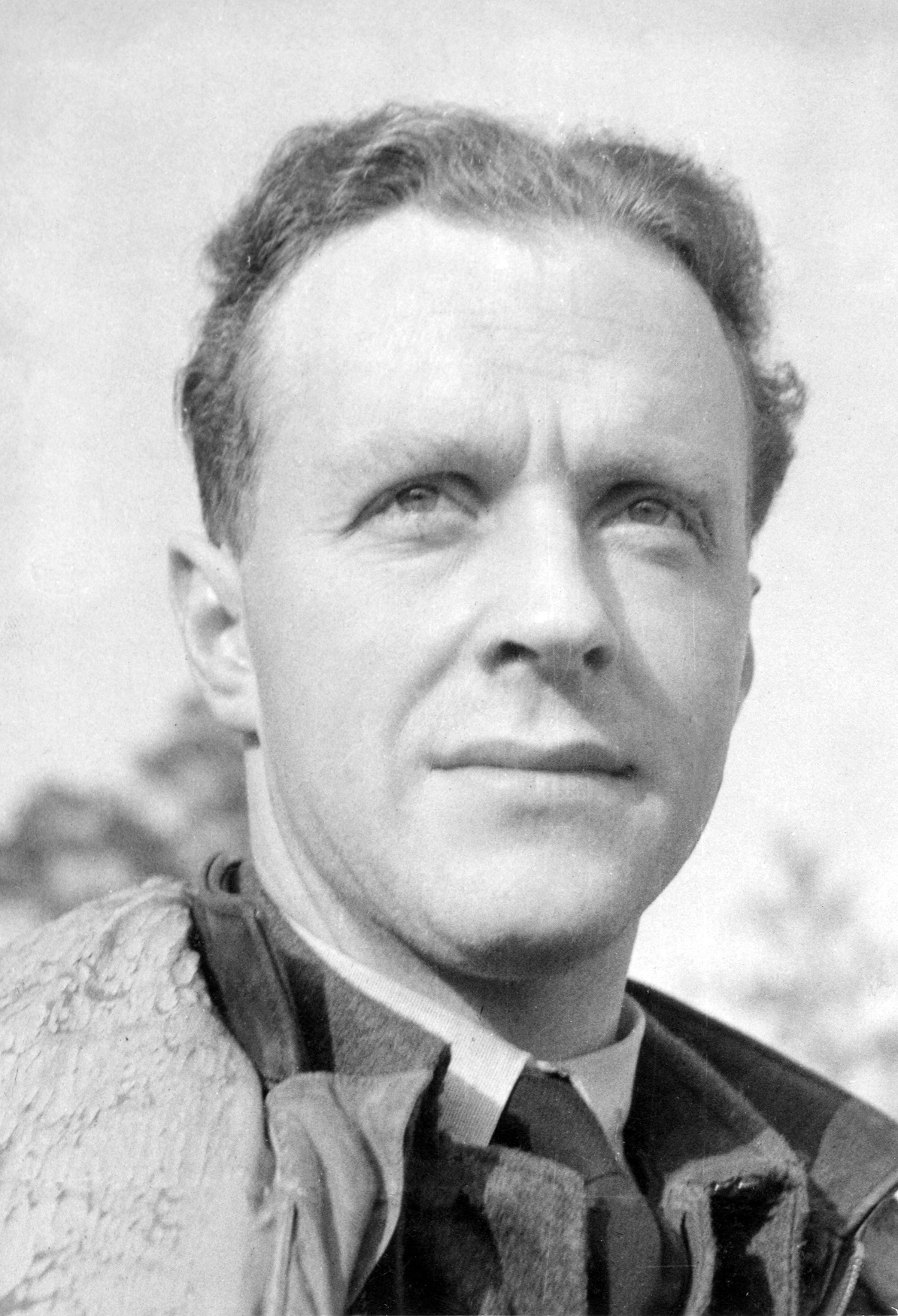 Ray Holmes was standing in a bookshop when he heard the war with Germany was over. The shop was in the market town of Wallingford, only a ten-minute drive from RAF Benson, in Oxfordshire, where the likeable Merseysider was stationed. Flight Lieutenant Holmes was a reconnaissance pilot on the strength of No. 541 Squadron; and for the last three months, he had been flying long, chancy, photographic missions, deep into enemy airspace, in a powerful blue-painted Spitfire.

Holmes had had a long and active war and, at 31, he was that rarest of things: an “old bold” pilot with over 2,000 flying hours logged. He had flown throughout the war; and whether intercepting enemy bombers, teaching novices to fly, or taking aerial photographs, his professionalism and skill were apparent, to say nothing of his nerve. His natural kindness and warm humour were also usually in evidence and he was considered good company. Ray Holmes was an asset to the Service, and an outstanding example of what is sometimes called “the greatest generation.” He might have smiled at that, but he was unarguably a veteran of proven ability; a survivor with a knack for being in the right place at the right time.

Born at Wallasey, Cheshire, on 20 August 1914, Raymond Towers Holmes grew up to love sport and fast cars, and he eventually became a crime reporter on the Birkenhead Advertiser. His connection with flying began in September 1936, when a friend suggested he apply to join the newly-formed Royal Air Force Volunteer Reserve. This part-time ‘citizens air force’ attracted extraordinary young men from ordinary backgrounds, and it would provide roughly one third of Fighter Command’s pilots for the Battle of Britain.

Having passed the medical, Holmes became the 55th volunteer to enlist; and in February 1937, he travelled to Prestwick, in Scotland, to begin his protracted flying instruction. He proved to be a good pilot, and on 18 June 1940, was posted to Wick, another Scottish station, to fly Hawker Hurricanes with No. 504 (County of Nottingham) Squadron. The German air offensive against Britain commenced the following month, and ‘504’ flew south to RAF Hendon, in north-west London, and the front line.

On 15 September 1940, the Luftwaffe attempted to force a decision in the air by launching a massive assault on London. By the end of that unforgettable Sunday, the course of the battle had changed, and with it the course of history. Henceforth, Britain and the Commonwealth would celebrate ‘Battle of Britain Day.’ Furthermore, Sergeant Ray Holmes’ very public brush with a Dornier bomber over Hyde Park Corner would become, for many, the defining moment of the 16-week campaign. 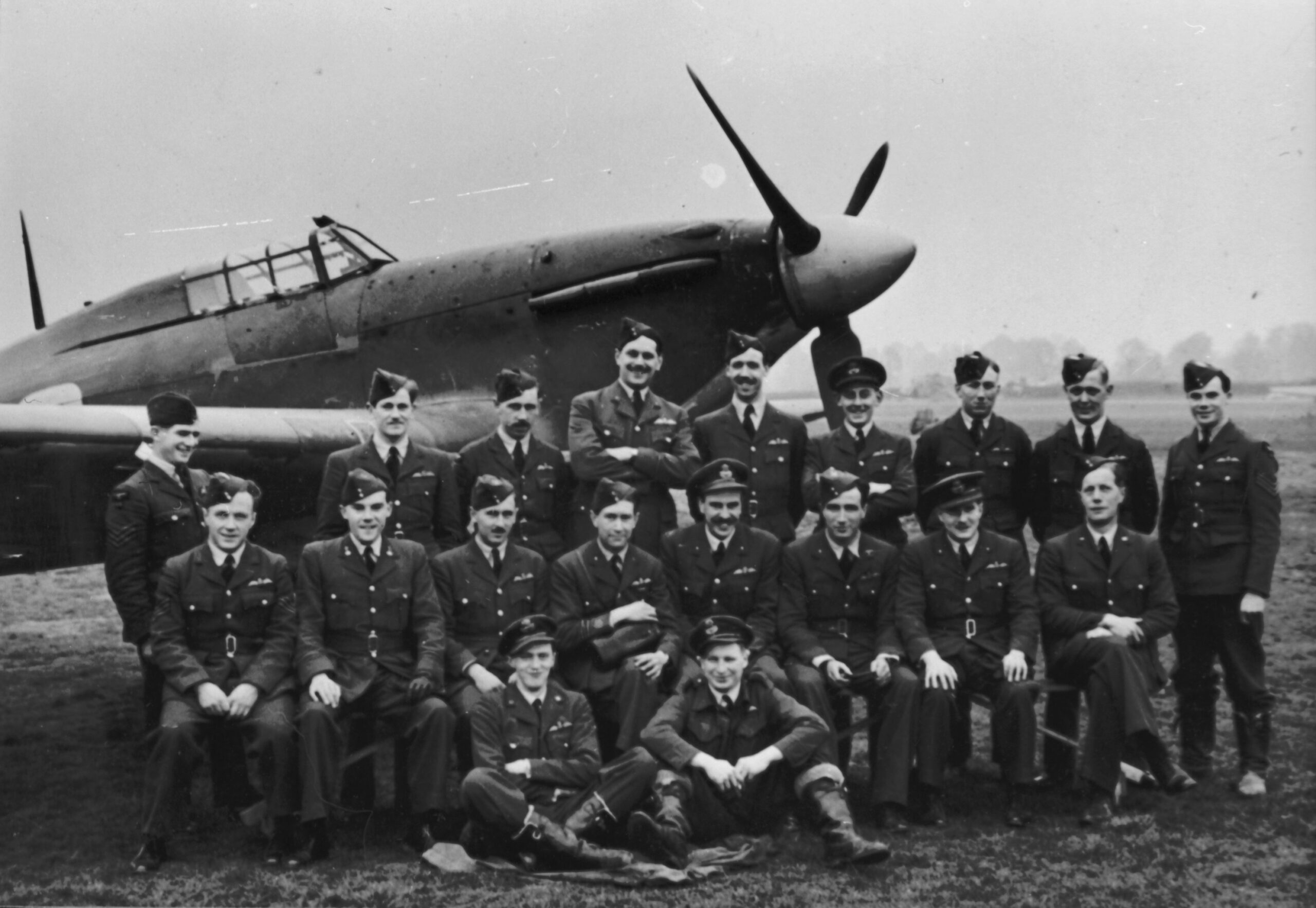 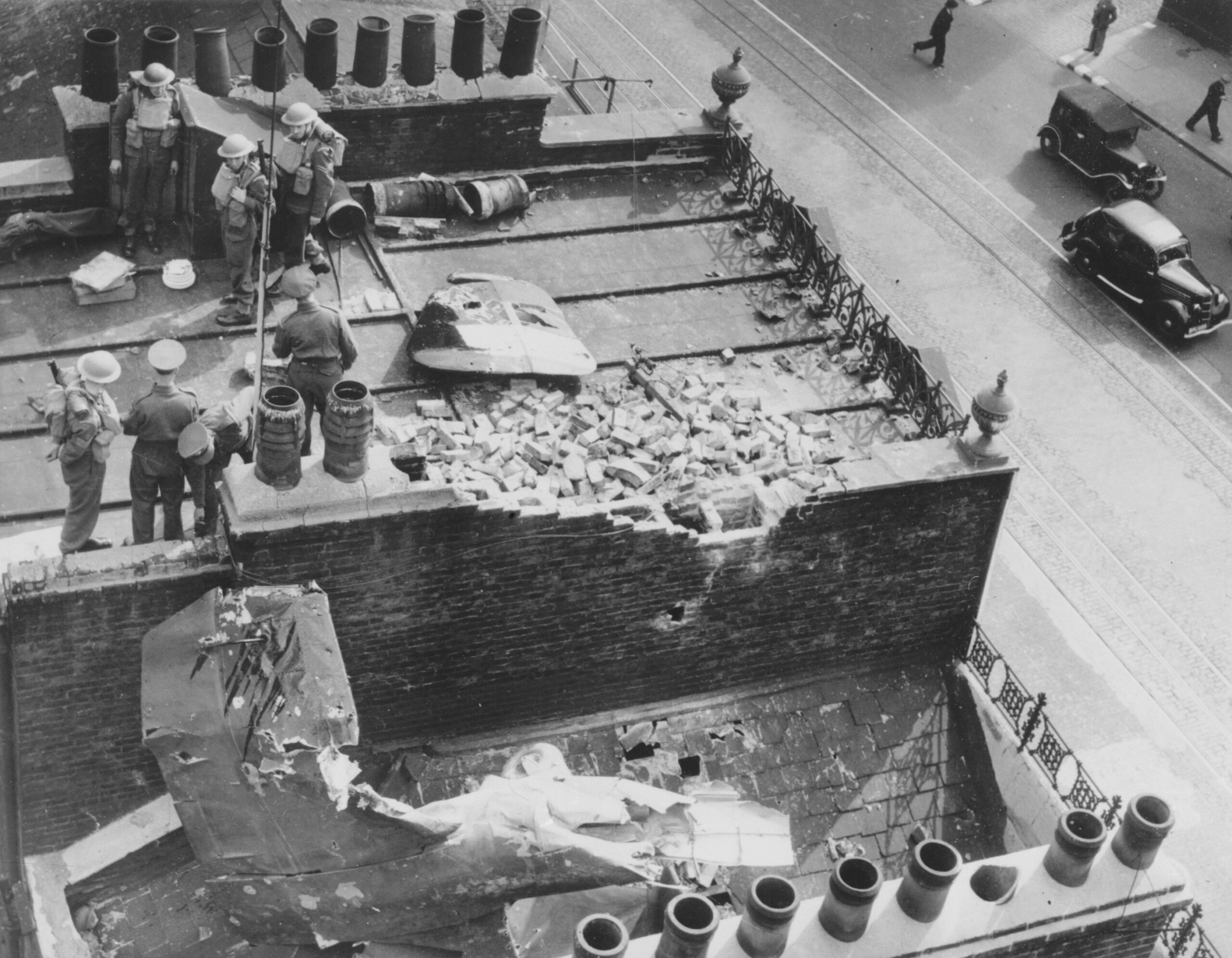 Exactly one year later, Ray Holmes, now a Pilot Officer, was in Murmansk in north-west Russia. He was serving with No.151 Wing, the RAF formation tasked with delivering Hurricanes to the Soviet Union, and teaching Russian pilots to fly them. Despite the grim reality of Stalinism, and the biting cold, Holmes got on well with his Soviet counterparts and they appreciated his talent as an instructor. He also managed to shoot down a Messerschmitt 109F while he was there. 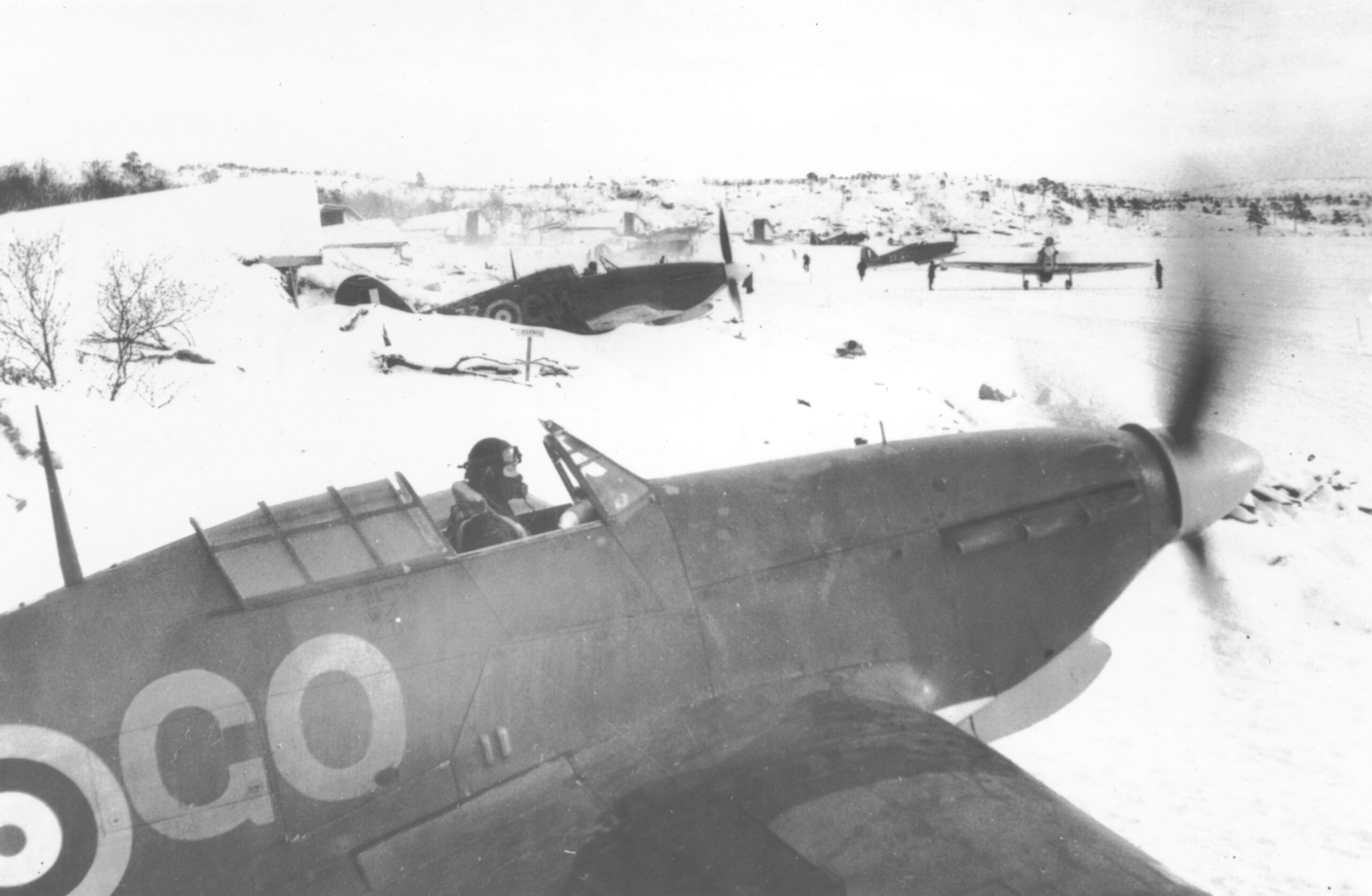 Holmes returned to the UK in December 1941 and qualified as a flying instructor. Over the next two years, he taught scores of pupils to fly, and later trained pilots to become instructors themselves. In February 1945, he returned to operational flying with No. 541 Squadron; and for the rest of the war, he flew a sleek, sky-blue Supermarine Spitfire Mk. XIX, taking photographs of vital importance 30,000 feet above the Reich. 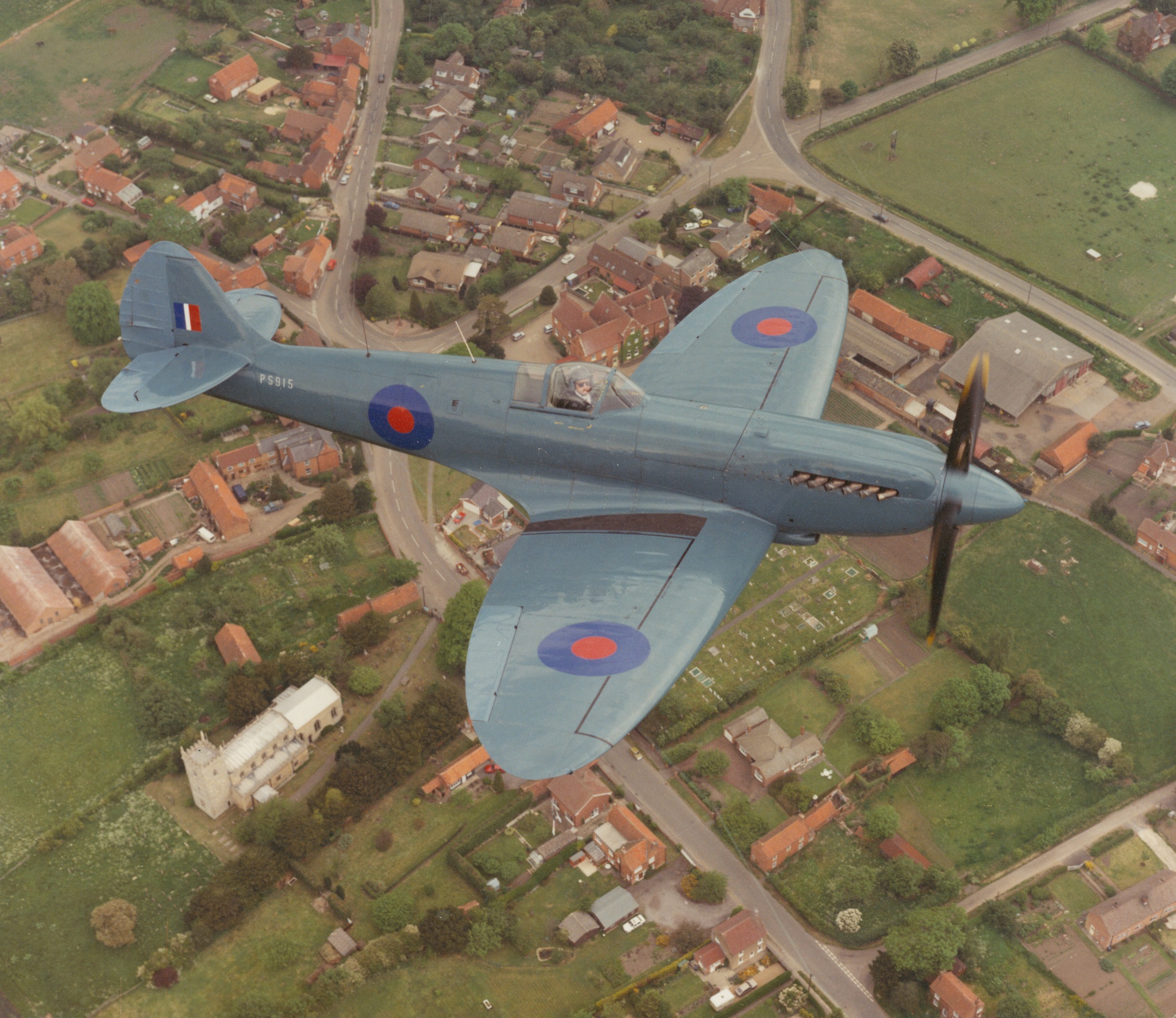 On the afternoon of 8 May 1945, the news that Germany had surrendered came over the radio in the bookshop in which Holmes was browsing. For weeks he had imagined a huge victory bash at the station, but now, instead of rushing back, he found himself lingering in the shop, scanning the shelves in search of the first book he would read in peacetime. A feeling of anti-climax was a common reaction that day.

Holmes described the VE Day celebration at RAF Benson in his memoirs:

‘One by one they turned up. There was a forced cheerfulness everywhere. The truth of the matter was that we had all been at full stretch for so long we could not relax when the tension suddenly went. Reaction. We talked about when we were likely to be demobbed, what we would do in civvy street, whether to apply for long service commissions in the RAF and, inevitably, of the fellows who had not lived to see victory.”

The ice was well and truly broken, however, when the Mess secretary announced that the Mess was opening its cellars and the cost would be shared equally. Ray wasn’t a drinker, but he drank that night, and his inexperience showed when he toasted the Allied victory with glasses of champagne, sherry, port, gin, whisky, vodka and beer. He had to be put to bed.

Ray was dismayed to be woken the next morning with the appalling news that ‘541’ had been ordered to photograph the French coastline; a task no doubt devised to keep the pilots on their toes. Although he was severely hung over, he knew the unwritten law of the wartime Air Force ‘that no matter how drunk you get the night before, you fly next morning.’ Shortly afterwards he found himself climbing unsteadily into the cockpit of his Spitfire and setting off for France. Switching on the aircraft’s oxygen supply was the pilot’s time-honoured way of dealing with a hangover and Ray breathed deeply.

The oxygen helped a lot and Ray Holmes took photographs of the coastline around Cherbourg competently enough using new infra-red film. He then flew the 150 miles back home to Benson with a heavy head, a dry throat and his whole life ahead of him.

‘The Most Dangerous Enemy: A History of the Battle of Britain’, Stephen Bungay (Aurum Press, 2000)