Flying boats over the Heligoland Bight

When Curtiss H12 and Felixstowe F2A Large America flying boats entered service with the Royal Naval Air Service (RNAS) in 1917, their six-hour endurance and 400 mile range enabled them to patrol the southern sector of the North Sea very effectively. However, from the East Coast of the UK, where the RNAS flying boats were based, the Heligoland Bight and the enemy naval bases on the north German coast were at the extreme limit of their range. Wing Commander John Porte, who directed RNAS flying boat research and development, proposed using specially-designed lighters to tow flying boats the 100 miles across the North Sea where they could take off from the open sea close to the Heligoland Bight. 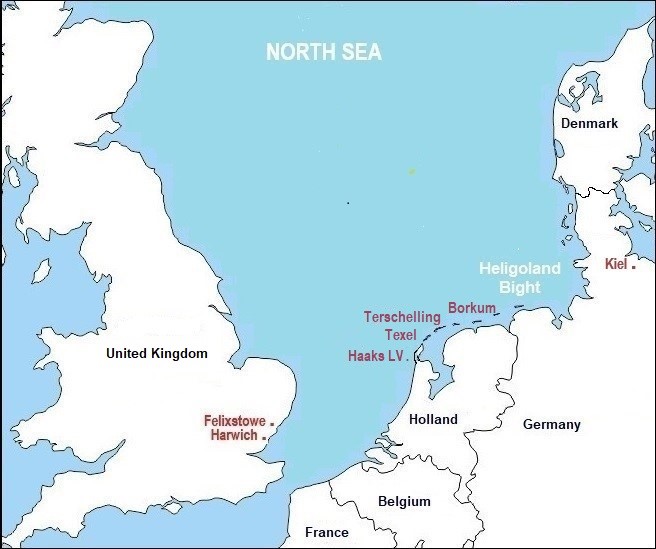 The Admiralty was quick to see the potential of Wg Cdr Porte’s idea and in October 1916 his initial lighter design was developed further. The main requirements were: ease of loading and offloading the flying boat; protection of the aircraft from being damaged by spray while in transit on board the lighter; and the lighter’s good performance when being towed by destroyers steaming at speeds of up to 35 mph. 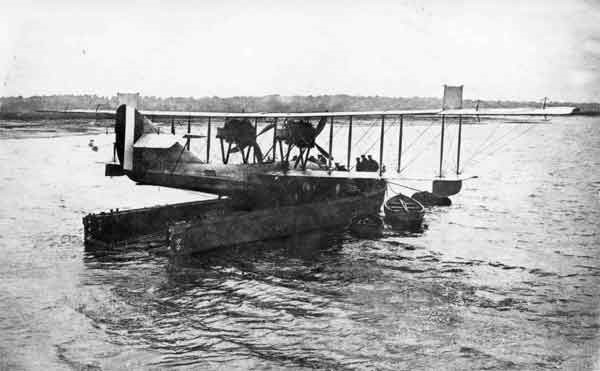 The resulting design included an open transom with ballast tanks incorporated in the sides of the steel hull near the stern. When these tanks were flooded the lighter became partially submerged so that the five-ton flying boat could be winched on board at the start of the voyage, then slid off again upon reaching its destination. When loading or unloading had been completed, the lighter’s trim could be readjusted for towing by blowing out the water in the ballast tanks with compressed air. 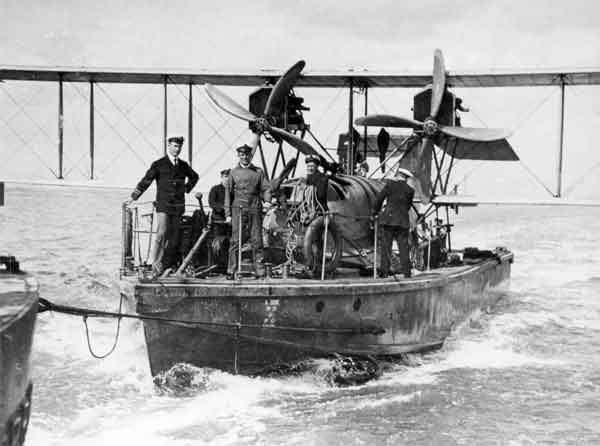 In order to deflect spray from the shipped aircraft, the bow had a concave cross section below the hard chine, which rose sharply upwards. To improve performance at high speed the bottom of the hull had a shallow v-section and two large fins were fitted underneath near the stern. In January 1917 the first four prototype lighters were ordered from Thorneycroft of Southampton. These were delivered in June 1917 and following the completion of their trials a production order for 50 lighters was placed at the Government shipyard at Richborough. The first production lighters were delivered in May 1918. 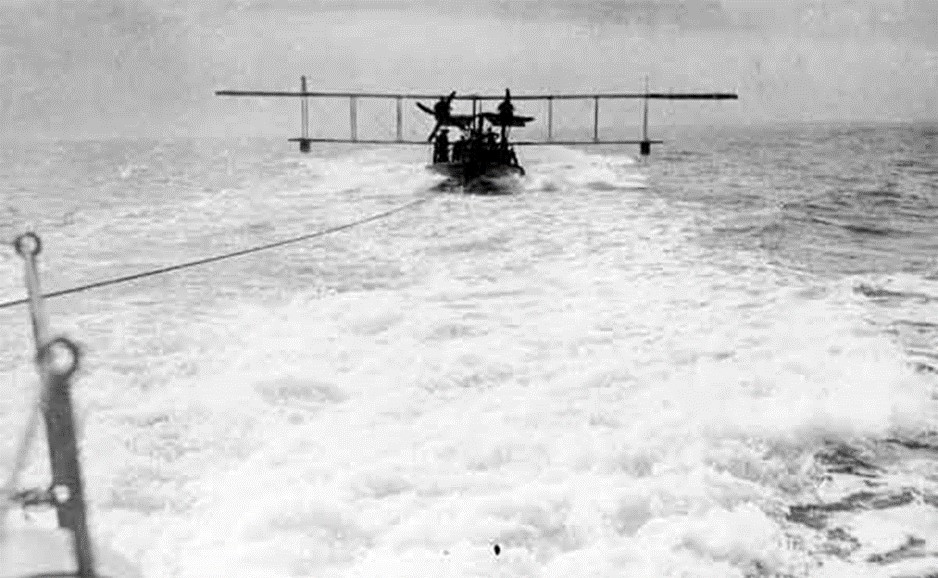 The first operational use of lighters was on 19 March 1918, when Curtiss H12 8677 and Felixstowe F2As N4282 and N4513 were towed to the Haaks Light Vessel near Texel off the Dutch coast. Squadron Commander TD Hallam, DSC, Commanding Officer of the Felixstowe War Flight, was on board the leading destroyer during this first ‘lighter stunt’ and in his book ‘The Spider Web’ he describes the North Sea crossing in detail, followed by the launching of the three flying boats: ‘the destroyers slowed down to three knots, and the boats were slid off the lighters backwards into the water. The destroyers made a right-hand turn and drew away from them. The warships formed a four-mile circle, travelling at speed in case a U-Boat, a German submarine was lurking about. In the centre, bobbing up and down on the water, were the three boats, looking incredibly small. Presently I saw white water breaking beneath their bows, they ran along the water, bucketing a bit in the swells created by the ships, and took to the air.’ 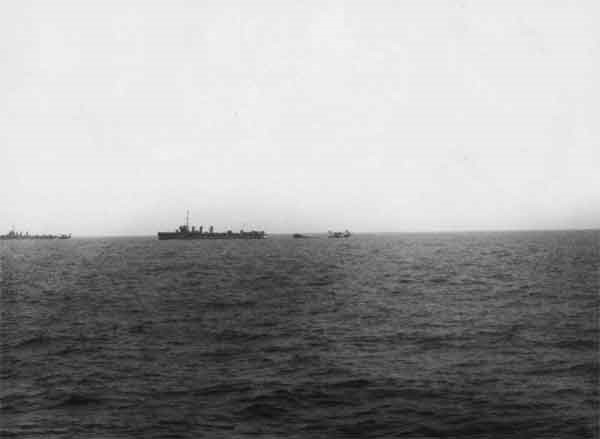 After successfully taking off the three flying boats flew over the British minefields surrounding the Heligoland Bight, noting where German minesweepers were clearing channels for a possible breakout from Wilhelmshaven and Kiel by the German High Seas Fleet. During a brief skirmish with two German seaplanes, Flight Lieutenant Norman Magor’s crew in F2A N4282 shot down one of the German aircraft and the second was driven off by Flight Lieutenant Cyril Clayton. However, during the exchange of fire the starboard engine of Flt Lt Magor’s aircraft was damaged and had to be shut down. While Flt Lt Magor kept the F2A in the air on one engine, Leading Mechanic Sydney Anderson climbed onto the starboard wing and worked on the damaged engine in the 90 mph (145 km/h) slipstream. After 1¾ hours he succeeded in repairing and restarting the starboard engine and for his courageous action, which enabled N4282 to return to Felixstowe with the other two aircraft, LM Anderson was awarded the Distinguished Service Medal. 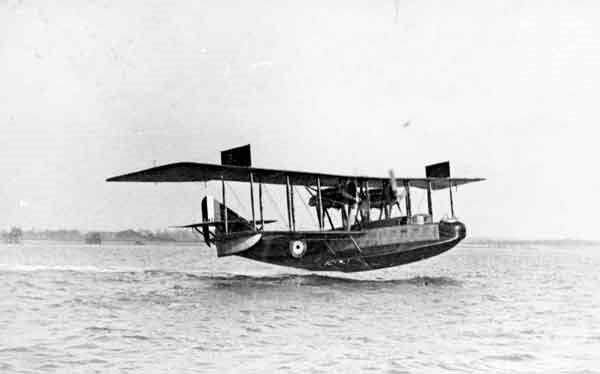 A second patrol by lighter-borne flying boats led by Flight Commander John Osborn ‘Tiny’ Galpin, DSC was carried out on 21 March, 1918. While observing naval activity in the Heligoland Bight the three RNAS flying boats were fired on by German minesweepers and promptly retaliated by strafing them. On 18 May Flt Lt Clayton led a third patrol. On this occasion the Harwich Force was shadowed by a Zeppelin, which Flt Lt Clayton tried unsuccessfully to drive away. Recording the episode in his diary afterwards he wrote: ‘At 4.50 we got into the air, and old man Zepp immediately started to beat it. We were all heavily loaded and … there was not much chance of catching him, but I didn’t want him following us and giving our position away, so proceeded to chase him… followed him (south-east) for about 30 miles; he then steered south-west towards Heligoland. We were still a considerable distance below him, so I turned off and started on the patrol we were to carry out. All the time the Zepp was wirelessing to beat the band, so we expected to see a bunch of Hun machines around at any time.’ However, despite picking up wireless signals from enemy aircraft, none were seen and Flt Lt Clayton led his patrol over the Heligoland Bight and back to Felixstowe without incident. They covered 756 km (470 miles) and were in the air for 7 hours and 35 minutes, topping up their fuel tanks in flight with extra cans of petrol carried inside their aircraft. 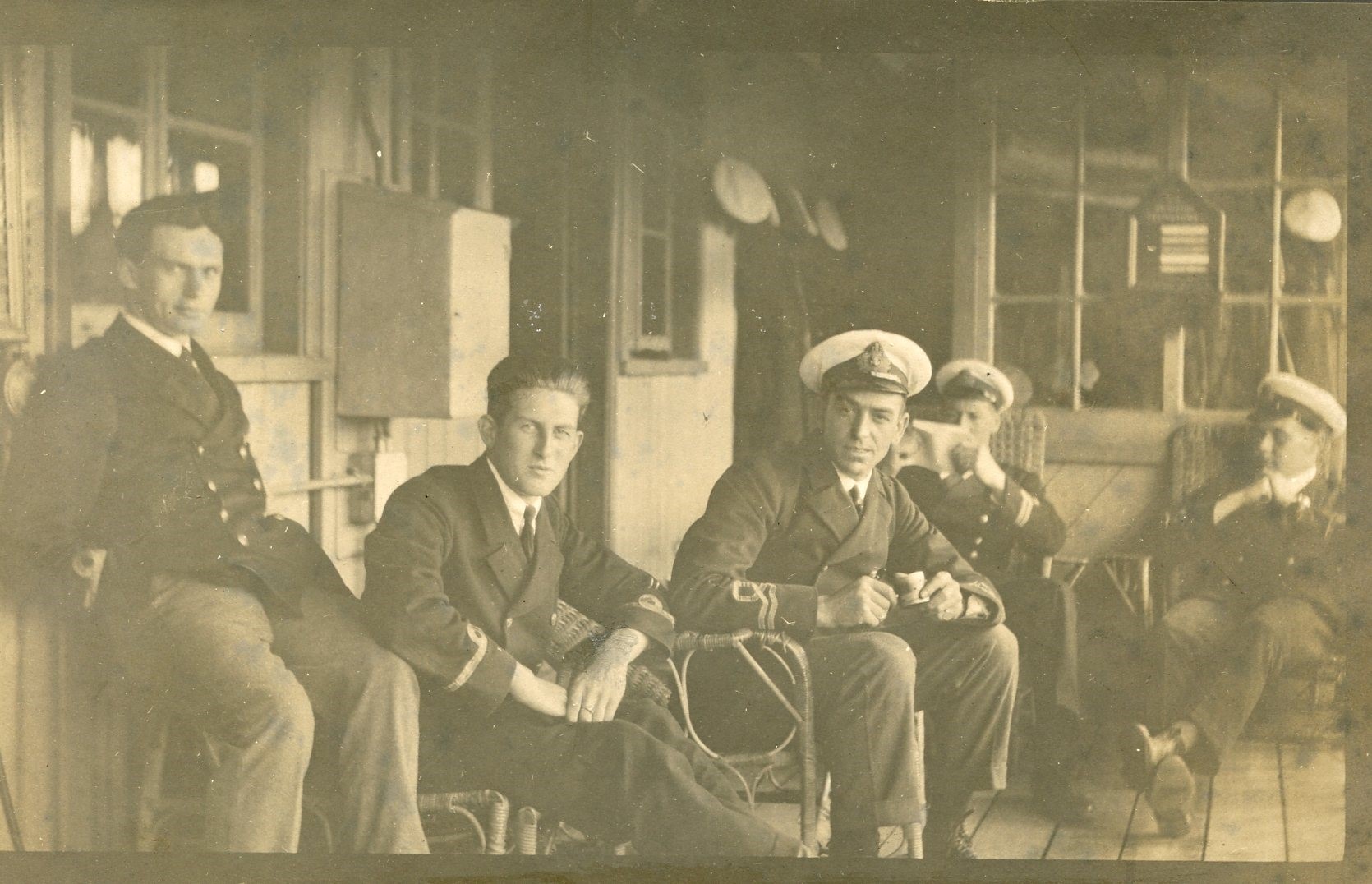 On 29 June 1918 the first of a new type of ‘lighter stunt’ involving coastal motor boats (CMBs) was carried out. Cruisers of the Harwich Force, each carrying two CMBs, dropped them just outside the British minefields around the Heligoland Bight. The small, fast CMBs armed with a machine gun and a single torpedo then carried out surprise attacks on German minesweepers and their escorting warships. The role of the flying boats was to protect the CMBs from German aircraft and to guide them back to the waiting Harwich Force warships after their attacks. A number of similar operations were carried out before the War ended, but in nearly every case the flying boats were prevented from taking-off by heavy swells or insufficient wind. On the first of these operations Lieutenant Harold S. Boulding’s F2A N4393 was the only one of the three flying boats which managed to take-off in the unfavourable conditions. One of the others was so badly damaged while attempting to take-off that it sank and the third had to abandon further attempts due to the damage it sustained. After completing his reconnaissance patrol, Lt Boulding’s luck finally ran out too when the starboard engine of N4393 failed and he had to make a forced landing in which the aircraft was badly damaged and sank. Fortunately, Lt Boulding and his crew were rescued by a Dutch trawler and were later transferred to a British destroyer. 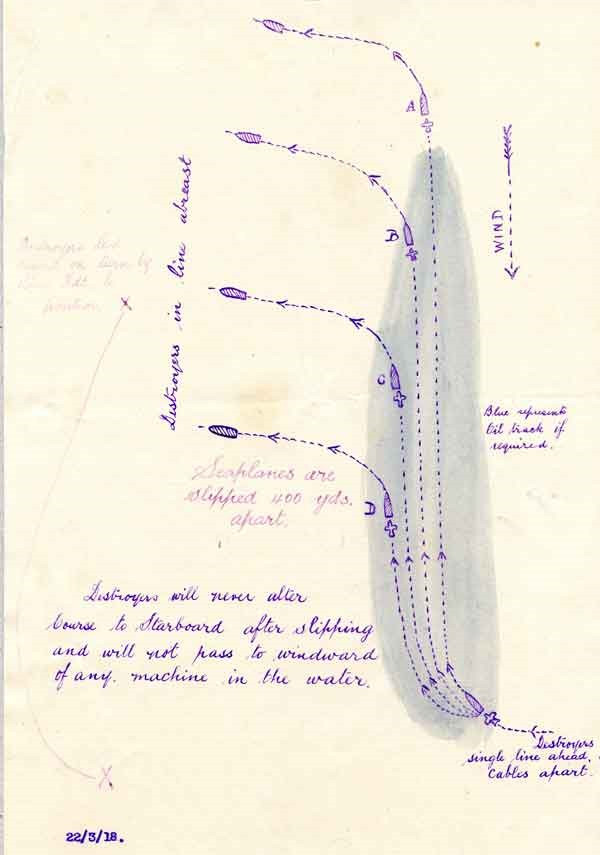 Ensuring that conditions were suitable for the flying boats to take-off once they had been towed to the Dutch coast was one of the greatest difficulties encountered during lighter operations. Oil was sometimes pumped out of the destroyers’ fuel bunkers into the sea in an attempt to give the lighter-borne flying boats a smoother take-off run. However, in practice the oil was found to be as much a hindrance as a help, as Lieutenant John M Vorys discovered. In 1918 Lt Vorys was seconded to the RNAS from the US Navy and his description of what it was like to take-off from a rough sea covered with oil appears in ‘The first Yale Unit’ by Ralph D Paine: ‘My boat poked its nose under the first wave and got a thick layer of crude oil. It was plastered all over the wind-shield, the first pilot’s goggles and the compass. He bravely tried to take off without being able to see a thing. I was spitting oil and counting the bounces. Fourteen of them before we staggered blindly out of the oil and managed to get into the air!’ 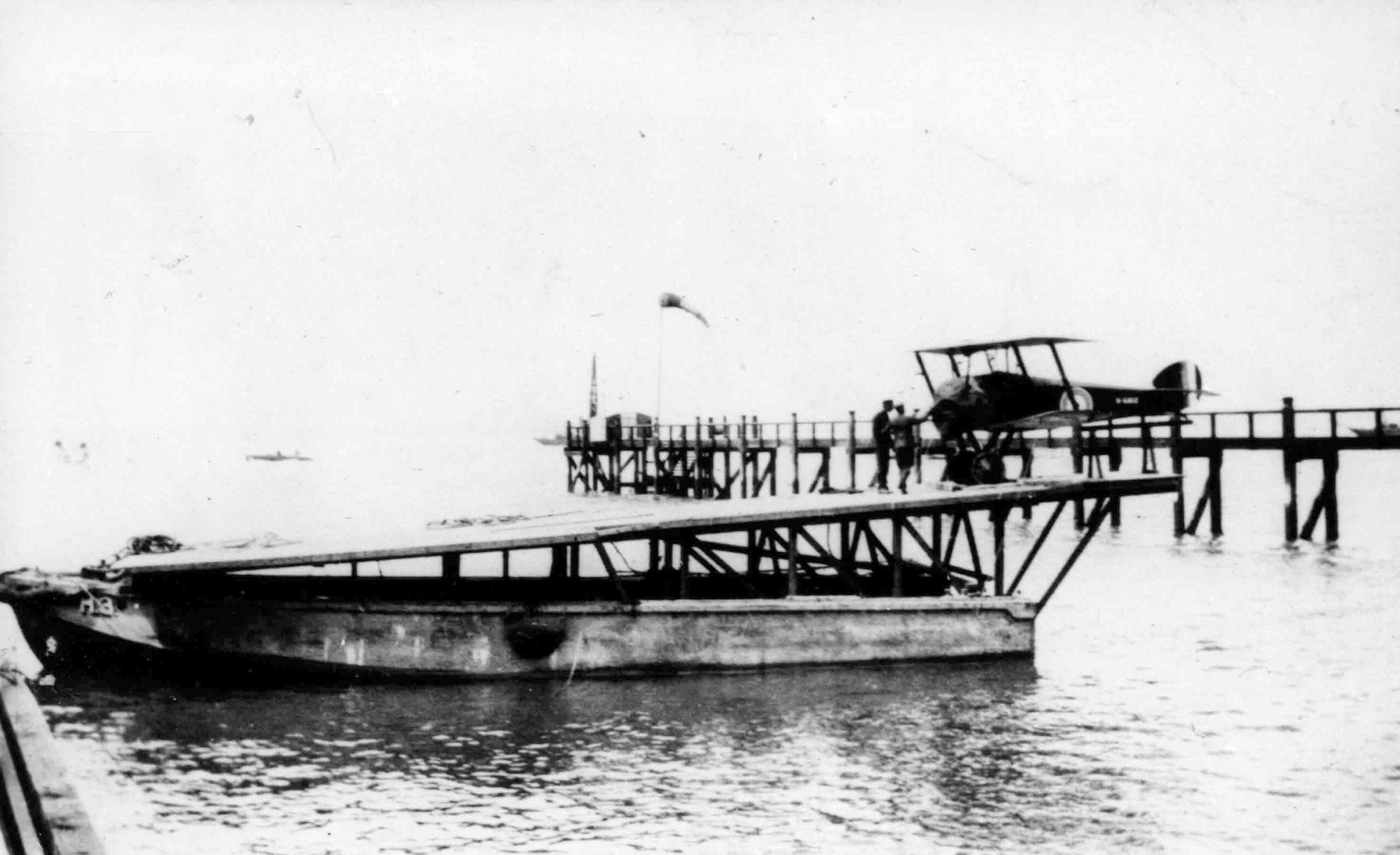 The most successful of the ‘lighter stunts’ occurred on the night of 10-11 August when cruisers and destroyers of the Harwich Force crossed the North Sea with six CMBs on board three of the cruisers and four lighters towed by destroyers, three carrying flying boats N4302, N4533 and 8689 and one fitted with a wooden take-off platform carrying Sopwith Camel N6812. 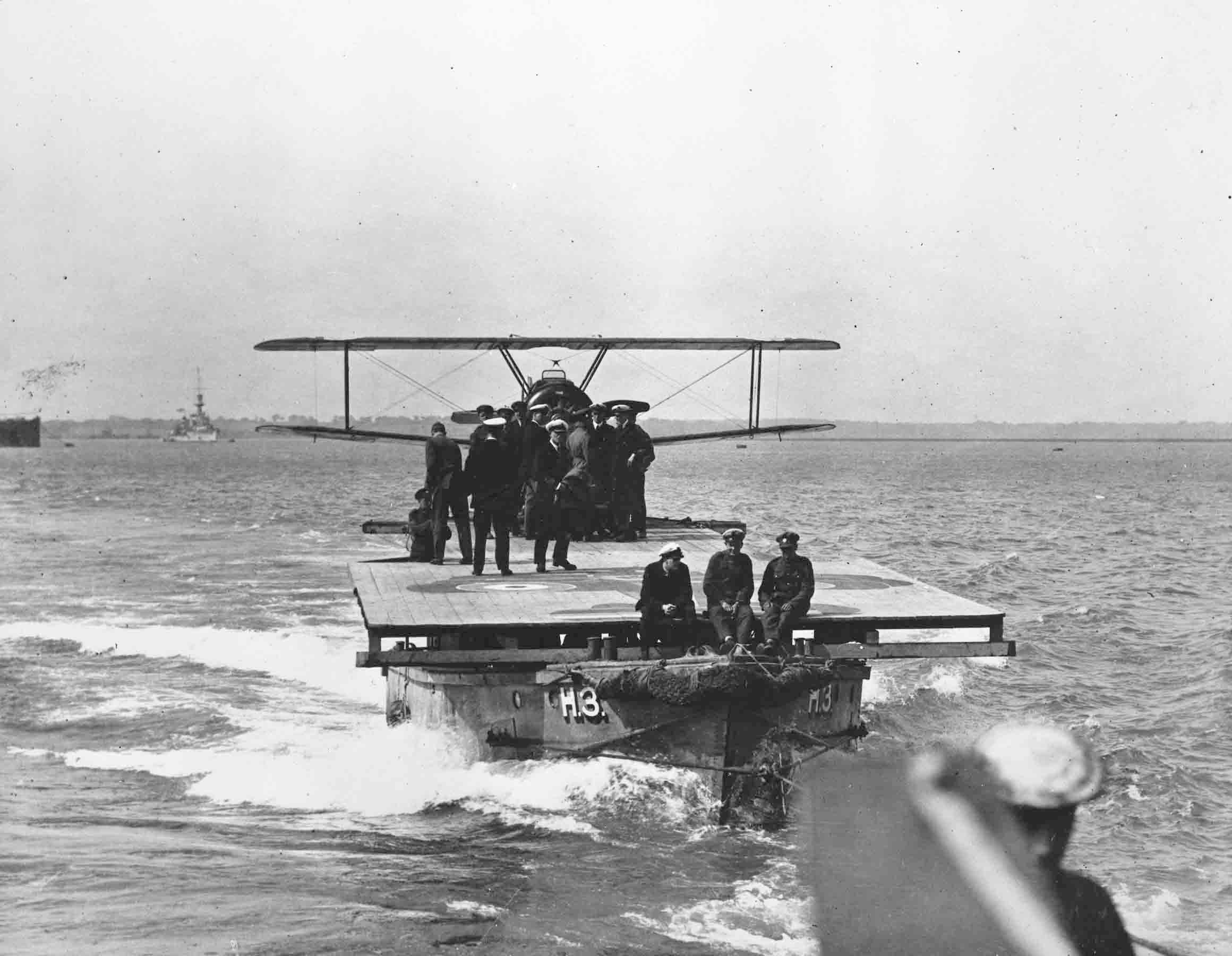 Two hours after reaching Terschelling, the largest of the Frisian Islands, the flotilla was joined by Zeppelin L53, cruising overhead at 19,000 ft (5,790 m). Eager to grasp the opportunity to attack the Zeppelin, Lieutenant Stuart Culley immediately took-off in the Camel from its modified lighter and began the long climb. After almost an hour he had gained enough height to attack, his approach having gone unnoticed by the crew of the L53. Lt Culley fired his twin Lewis guns from 300 ft (91 m) below the Zeppelin and within seconds the hydrogen gas inside L53 ignited and the 644 ft (196 m) long airship plummeted towards the sea in flames and crashed 10 miles south-west of the Borkum-Riff light vessel, with the loss of all but one of her 19-man crew. Lt Culley then faced the problem of locating the British warships and had almost run out of fuel by the time he spotted them. He ditched in the sea next to the destroyer HMS Redoubt with its now empty lighter and both he and his Camel were recovered. This was the crowning achievement of the North Sea lighter operations for which Lt Culley was awarded the Distinguished Service Order. To this day his Camel can be seen on display at the Imperial War Museum. 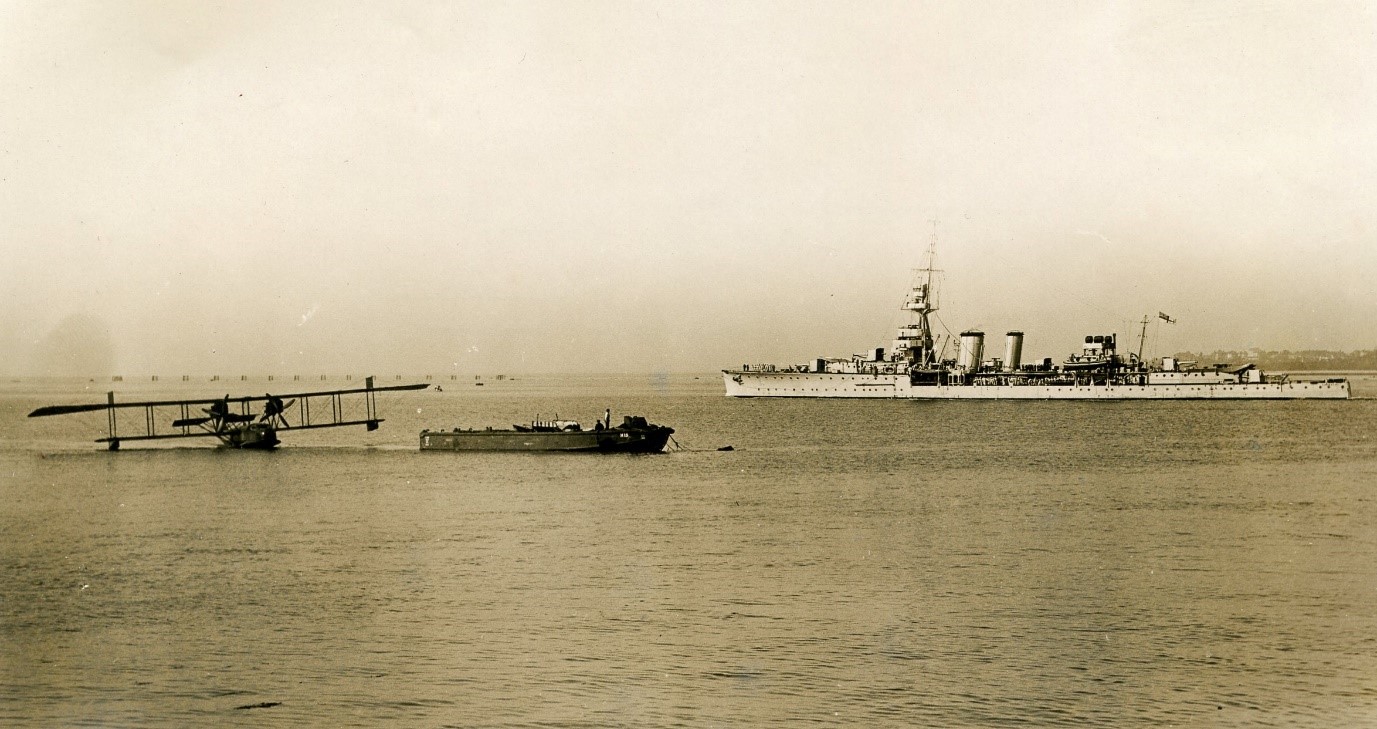 Sadly, however, the planned part of the operation did not go well. Sea and weather conditions prevented the three lighter-borne flying boats from taking off and the six CMBs were left to proceed without air cover. The element of surprise was lost when L53 reported the presence of the British ships and German seaplanes from Borkum and Nordeney attacked the CMBs sinking or disabling all six for the loss of one seaplane shot down.

The final lighter operation of the War took place on 24 October 1918 when four flying boats and four Sopwith Camels on lighters were towed to Terschelling with the intention of avenging the British CMBs lost on the 11 August by luring German seaplanes from Nordeney and Borkum into a trap. Unfortunately the operation had to be abandoned when neither the heavily-laden flying boats nor the Camels were able to take-off due the weather and the sea conditions. 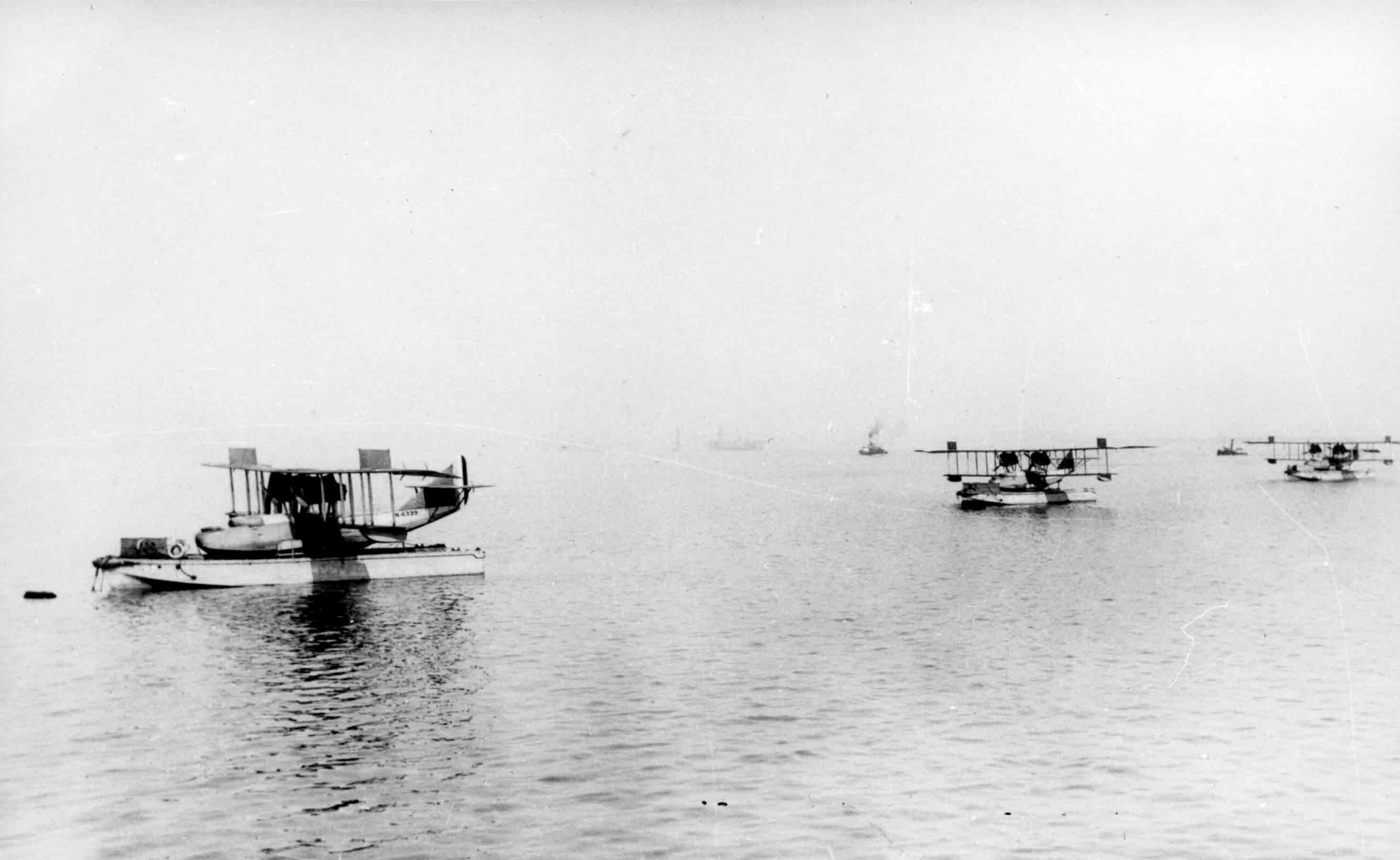 In 1916 the Admiralty had eagerly adopted the concept of towed lighters to enable flying boats to harass German warships and bomb naval bases in the Heligoland Bight. When the United States entered the War in 1917 the US Navy was equally enthusiastic and intended to operate its own fleet of 50 lighters from its flying boat base at Killingholme. However, by mid-1918 the practical difficulties of conducting lighter operations in the North Sea were better understood, besides which more effective means of carrying out long range bombing attacks had been developed, such as the land-based Handley Page V1500 bomber and aircraft carriers like HMS Furious and HMS Argus. As a result in July 1918 the idea of mounting bombing attacks on Germany’s naval bases by lighter-borne flying boats was abandoned and the US Navy’s plans to develop its own lighter force were also shelved. Of the 50 lighters ordered only 32 were built, the other 18 being cancelled when the war ended.