Flying boats over the Northern Isles

The North Atlantic trade route to the USA and Canada was a vital lifeline for Great Britain during the First World War. Meat, sugar, flour, iron ore, wool, munitions and oil were just some of the essential supplies which were brought across the Atlantic by sea. In 1917 the German government decided to try to starve Britain out of the War by removing all restrictions governing her submarine attacks on shipping in British waters. This meant sinking not only British merchant ships but also ships of any country – allied or neutral – which sailed into British ports, Although this policy risked bringing the neutral United States into the War, Germany was confident that with Britain blockaded by U-Boats, there would be neither the ships nor the time available for the USA to bring her troops to Europe before a the German army defeated her remaining opponents on the Western Front. However, after the initial success of the U-Boats in the Spring of 1917, British counter-measures quickly began to take effect. The convoy system was introduced in April 1917 and merchant ships now sailed in groups escorted by warships and aircraft, rather than individually. This not only reduced the number of targets for the U-Boats to attack but also made their attacks more difficult and dangerous to carry out. By 1918 anti-submarine defences were also taking a heavy toll. The Dover Barrage protecting the entrance to the English Channel was one of the most formidable of these. It consisted of a line of anti-submarine nets and minefields barring the entry of submerged submarines to the Straits of Dover. During 1917-1918 it accounted for 13 U-Boats (almost 10% of the U-Boat losses during this period). 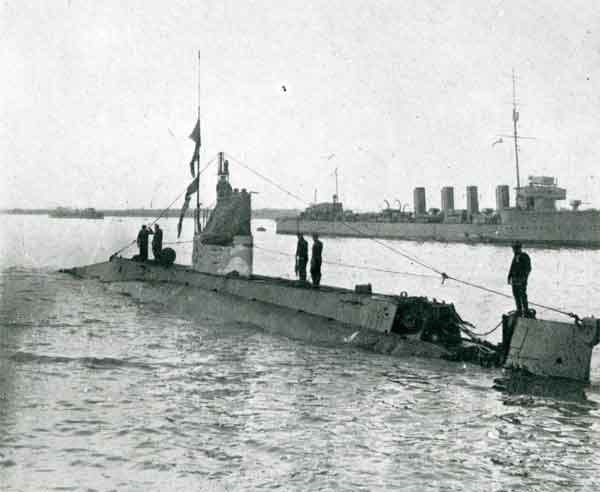 The only way U-Boats could avoid the Dover Barrage was to remain on the surface when they went through the Straits. However, naval patrols made this very hazardous in daylight and even in darkness searchlights and flares were used to detect any U-Boats trying to slip through on the surface at night. 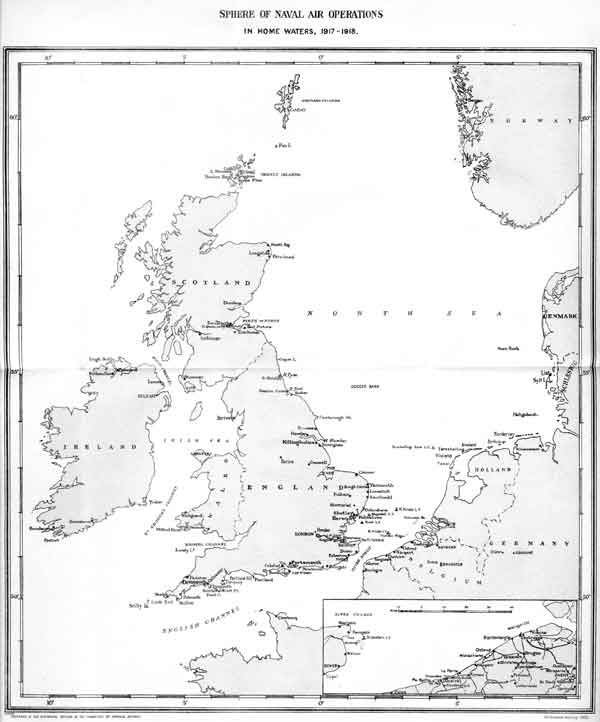 In February 1918 the large, ocean-going U-Boats based at Kiel were ordered to stop going through the Straits of Dover and to enter the North Atlantic by the northern route round the top of Scotland, which was not so well-defended. In September 1918 the smaller, shorter range U-Boats based at Bruges and Ostend were given the same orders, but to try and stop U-Boats using this alternative route into the Atlantic the Northern Mine Barrage was set up This was an anti-submarine minefield stretching 230 miles across the North Sea from the east coast of Orkney as far as the approaches to Hardanger Fjord off the Norwegian coast. It was laid by vessels of the United States Navy assisted by the Royal Navy between March and November 1918. At a conference involving the First Sea Lord and the Commander-in Chief of the Grand Fleet held in August 1917 it was decided to establish a flying boat base in the north of Scotland so that long range aircraft as well as naval vessels could patrol the minefield and further harass U-Boats using Scottish waters to enter the Atlantic. The existing seaplane station at Houton Bay was an ideal site and work was begun immediately to prepare it for flying boat operations. 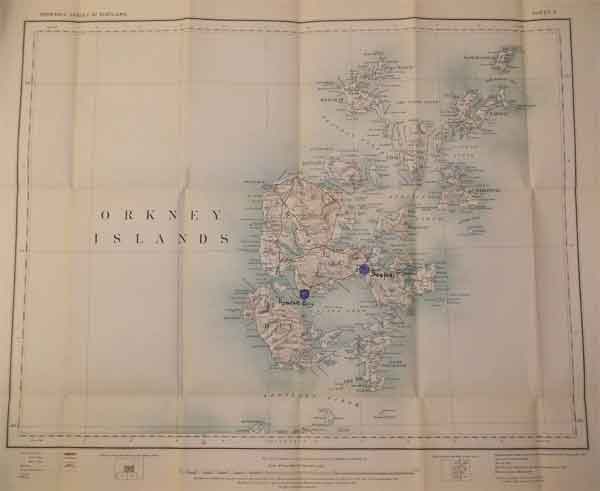 Sheltered from the worst of the Atlantic gales on the western shores of Scapa Flow, Houton Bay had been chosen as the location for a seaplane station in 1916. With the addition of facilities for flying boats in 1917-1918 it eventually occupied almost quarter of a square mile of land and was equipped to operate 18 flying boats and seaplanes. Facilities included a seaplane hangar, two larger hangars for flying boats, two slipways, a jetty, workshops, a meteorological section, storage buildings, a wireless station and accommodation for 30-40 officers and about 350 men. 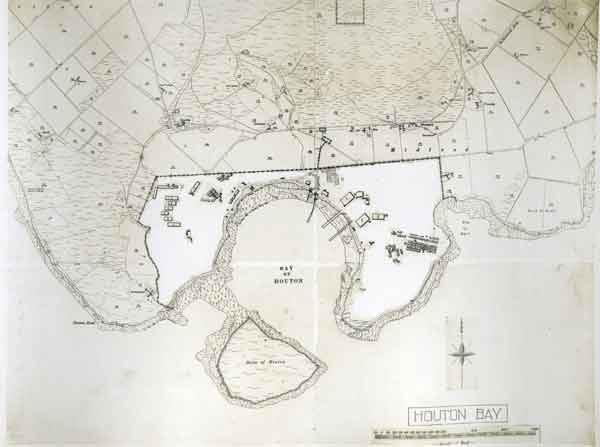 Houton’s Flying Boat War Flight and Seaplane War Flight operated a variety of aircraft between late 1917 and May1918, including Curtiss H.16 Large Americas and Felixstowe F.2s and F.3s. Yet despite the high priority placed by the Admiralty on air patrols over the Northern Barrage, difficulties in aircraft production kept numbers of operational flying boats smaller than had been hoped until the late summer of 1918, by which time 430 Flight, equipped with Short 184 seaplanes, 306 Flight, with Felixstowe F.2A and F.3 flying boats and F Boat Seaplane Training Flight with Felixstowe F.3s had been formed there. 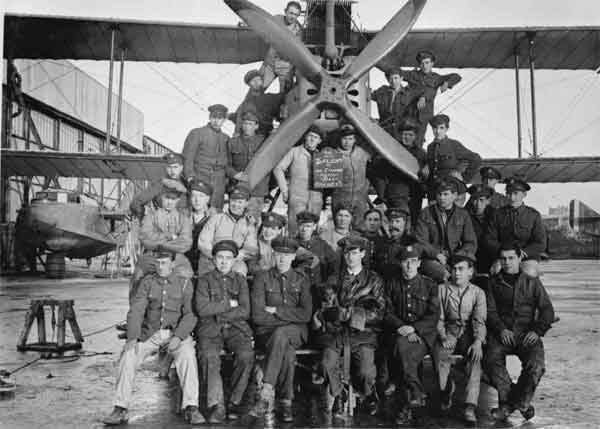 One of the pilots who flew from Houton Bay was Captain Henry Kendall. Though only 21, Kendall was already a seasoned flying boat pilot when he arrived at Houton Bay in May 1918. He had joined the RNAS in 1916 and after completing his flying training in late 1917 he spent several months at Calshot flying patrols over the English Channel and instructing new pilots. When he was not flying, the flamboyant and popular Kendall enjoyed putting on shows with the Houton Bay concert party to provide welcome entertainment for the camp’s personnel. On one occasion he had to break off from rehearsals when a U-Boat was spotted 50 miles off the Shetlands and Kendall – as duty pilot – was tasked with investigating the sighting report. An hour after taking-off from Houton he reached the location of the sighting and found a U-Boat on the surface. He immediately attacked and dropped two bombs on the submarine as it was submerging. At the time it was believed to have been sunk, but like so many others it managed to escape. For his good work in carrying out the attack Kendall was awarded the Air Force Cross. He remained at Houton Bay for the rest of the War, finally departing in early 1919 with the rank of Flight Lieutenant.

Lieutenant Thomas Crouther Gordon, a Scot, was delighted to be posted from Lee on Solent to Houton Bay in July 1918. His wartime reminiscences and photographs were published as a BBC book entitled “Early Flying in Orkney” based on the entries he made at the time in his flying log book and diaries. He describes the constant difficulties the ground crews faced in repairing damaged aircraft and in keeping them airworthy despite the often poor weather and occasional severe gales. This badly effected the men’s morale until efforts were made to improve their working and living conditions and to organize off duty activities for them.
Hockey matches with teams from the warships anchored in Scapa Flow were a particularly popular pastime when the weather was too bad for flying. 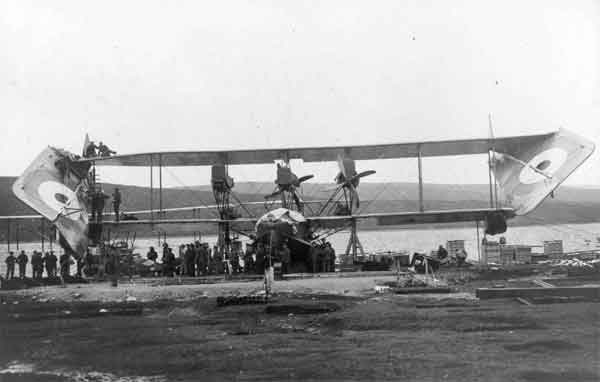 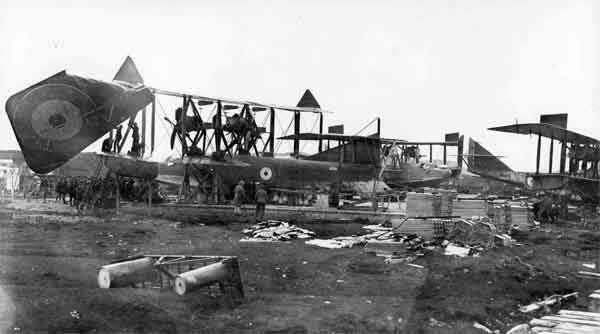 The dangers faced by the flying boat crews during their patrols are apparent from Gordon’s account of one flight which he describes as “the most exciting, dangerous and perplexing day of my whole career”. On September 15th 1918 he was on patrol in a Felixstowe F.3 flying boat 60 miles out over a North Sea mine field, unable to see land due to low cloud and with no ships in sight when the petrol pipe supplying one of the engines became disconnected – a not uncommon occurrence. The engine was not completely starved of fuel and continued to run, but leaking petrol caught fire when it came into contact with the engine’s hot exhaust pipe and flames threatened to set fire to the wing. Deciding to remain airborne for as long as possible, Gordon succeeded in bringing the aircraft home just as the starboard engine cut out. Writing of the experience in his diary, he recorded, “No hour of my life was so crowded with prayer.” In January 1919 Gordon was one of the four Houton Bay pilots decorated for gallantry in the New Year’s honours list. He was awarded the Distinguished Flying Cross.

In early 1918 building work began on the island of Shetland to construct what was intended to be another large flying boat base for aircraft patrolling the Northern Mine Barrage. The site chosen was nine miles north of Lerwick on the eastern shores of Cat Firth, making it the most northerly flying boat base in Britain. Its facilities included a hangar for flying boat maintenance, two slipways, workshops and stores buildings, a wireless direction station, pigeon loft and huts to accommodate the personnel stationed there. 300 (Flying Boat) Flight was formed at Catfirth on 14 June 1918, operating Felixstowe F2As and F3s. Had the war continued Catfirth would have been considerably enlarged and at least five flying boat flights were to have been based there. However, building plans were scaled back as the War drew to a close and the proposed additional hangars and some of the accommodation huts were never built. 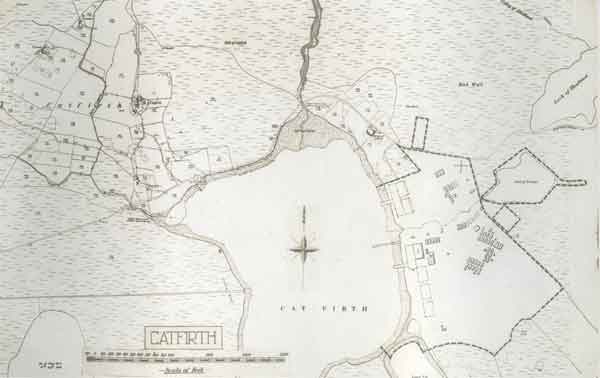 Both Houton Bay and Catfirth were abandoned by the RAF shortly after the end of the First World War. A few of the buildings are still standing at Catfirth but at both sites most have now gone and only their foundations are left along with the remains of a slowly disintegrating pier and slipways. Apart from these physical remains, a few surviving photographs and documents are now the only reminder of the vital role played by the flying boat crews based at Houton Bay and Catfirth in defending the UK against Germany’s U-Boats during the First World War.