Flying boats over the Western Approaches

During the German U-Boat blockade of Britain during the First World War the Western Approaches was one of the most critical areas. The Atlantic trade routes between Britain and the USA, Canada and Africa all converged in these waters to the south west of Britain. Following Germany’s adoption of unrestricted submarine warfare in February 1917 merchant shipping losses here as in all British home waters increased drastically and there was a real danger of Britain’s vital transatlantic supply lines being cut with catastrophic results. The Royal Navy had already realised the importance of using aircraft in anti-submarine operations and an airship base had been established at Mullion on Cornwall’s Lizard Peninsula in June 1916. As the situation at sea worsened and the need for anti-submarine aircraft became more acute, additional coastal aerodromes were hurriedly established at Newlyn, near Lands End, Tresco in the Scilly Isles, Padstow and Torquay.

The Scilly Isles, 25 miles off the Cornish coast, was an ideal location for the RNAS’s long range flying boats and the harbour near New Grimsby on the Island of Tresco provided a suitable stretch of calm water where flying boats could take off and land. Royal Naval seaplane Base, Isles of Scilly was established on a 20 acre site fronting the harbour. In addition to hangars, offices and living accommodation, a wooden slipway was built so that the flying boats could be brought ashore for maintenance. RNAS and RAF flying boats operated from here between February 1917 and May 1919, making an important contribution to the protection of British shipping from Germany’s U-Boats. 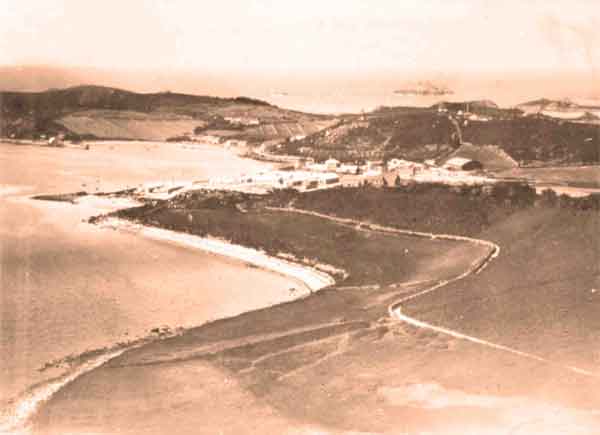 The initial compliment of aircraft at Tresco was six flying boats. The first aircraft to arrive in February 1917 were Curtiss H.12 Large Americas, which had only recently entered RNAS service. American-built, these twin-engined biplane flying boats had a wingspan of 92 feet and were adapted for RNAS service by replacing their Curtiss engines with more powerful Rolls-Royce Eagles. They were relatively fast, well-armed and had an impressive range. In February 1918 a redesigned British version of the Large America – the Felixstowe F.2A – began to replace the H.12s and in July the further improved Felixstowe F.3, with a longer range and a heavier bomb-load, replaced most of the H.12s and F2s. By mid-1918 nine flying boats and two seaplanes were based at Tresco – almost twice the number of aircraft originally planned. 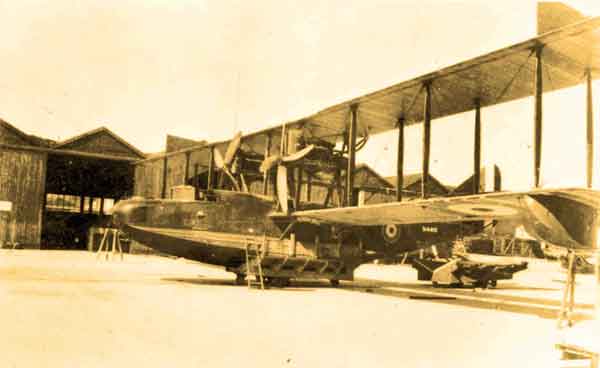 The main job of the Tresco-based flying boats was to fly long range anti-submarine patrols looking for surfaced U-Boats lying in wait for British convoys in the Western Approaches. These patrols lasted from one and a half to five hours and covered the seas around the Scilly Isles in a 250 degree arc with a maximum radius of 75 miles. Aircraft were allocated patrol areas within this large expanse of sea based on a gridded map, similar to the Spider Web used by flying boats operating from Felixstowe over the North Sea. On a good day one aircraft could cover 1,600 square miles of sea in a single patrol. Aircraft based at Plymouth, Newlyn and Fishguard patrolled adjoining areas, ensuring that there was no refuge for U-Boats anywhere in the seas around the south-west of Britain. 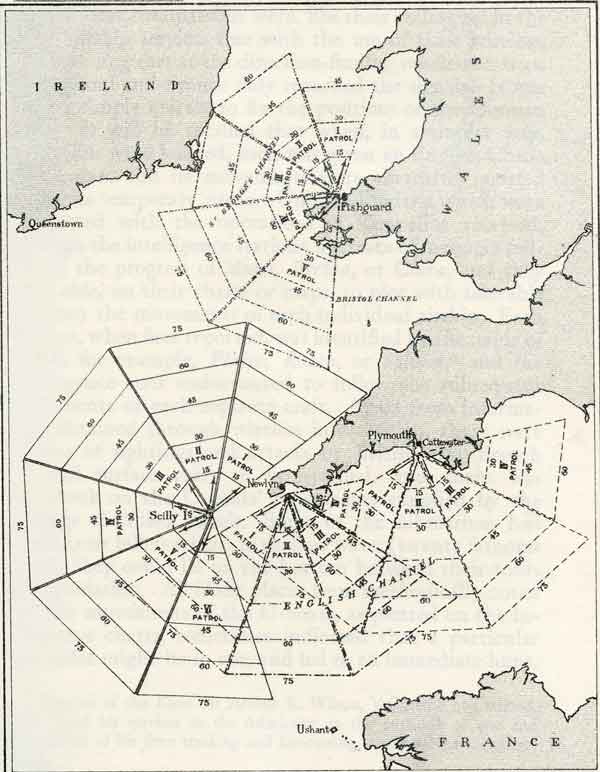 In good visibility a surfaced U-Boat could be spotted from the air from up to five miles away. This was demonstrated on 27 May 1917 by Flight Sub-Lieutenant W.L. Anderson and the crew of H.12 8656. Anderson described their encounter with a U-Boat as follows: “1018, sighted hostile submarine on starboard bow, altered course to attack. 1024, submarine opened fire with machine guns. 1025, dropped two 100-lb bombs, two direct hits observed forward of the conning tower. Submarine sank by the bows, stern coming out of the water at an angle of 60 degrees. Circled round position and observed bubbles and foam, considerable quantity of oil. 1028, set course south. Observed serious leak in starboard radiator. CPO Tadman climbed onto the wing root and plugged hole with handkerchief. Remaining thus until return. 1040 (sighted destroyer ‘Medina’ and ML319). Sent signal. 1050 landed, loosing height all the while. Eight direct hits on seaplane.”  Anderson and his crew showed great courage in attacking the U-Boat while under fire and in bringing their damaged aircraft home safely. For their gallantry William Anderson was awarded the Distinguished Service Cross and John Tadman the Conspicuous Gallantry Medal. The wreck of the U-boat claimed by Anderson’s crew was discovered during an underwater survey of its suspected location in October 2018, making it the first ever confirmed sinking of a submarine at sea by an aircraft and the only confirmed sinking of a U-boat by the RNAS and the RAF during First World War.

In the Atlantic waters off the British coast it was very difficult for an aircraft to see a submerged U-Boat. The U-Boats crews were well aware of this and usually dived before an approaching aircraft had time to attack, making itself a much more difficult target for the aircraft’s pilot. Instructional diagrams like this one were produced to help pilots estimate the position of a submarine as it disappeared from sight beneath the waves. 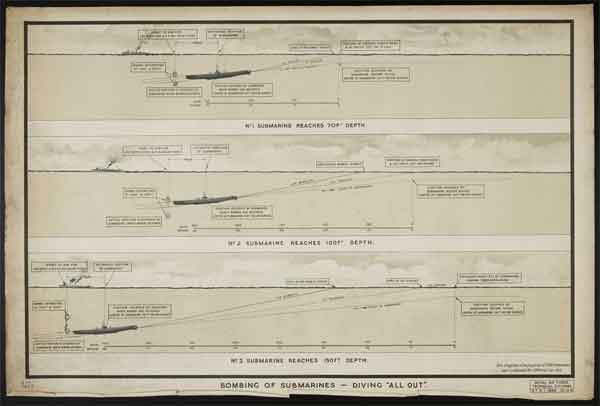 In addition to their anti-submarine patrols duties, from time to time Tresco’s aircraft were also called upon to escort convoys, search for missing ships and aircraft, and blow up drifting mines with their machine guns. On more than one occasion Tresco’s flying boats intervened to save ships under attack by U-Boats. One such action occurred 40 miles north west of the Scilly Isles on 7 September 1918 when Felixstowe F.3 N4238 bombed a U-Boat which had just torpedoed the liner SS Persic. The Persic was carrying 2,800 American troops bound for Britain and would almost certainly have been sunk if the flying boat had not appeared on the scene. Fortunately, though badly damaged, the Persic remained afloat and all the troops were taken off safely. In his log book, a copy of which is held by the RAF Museum (RAF Museum reference X003-9918/001),Flight Sub Lieutenant Horace Prime, an American pilot serving with the RAF at Tresco, reported sighting the Persic on the day when she was torpedoed and then on 24th September he reports escorting her as she headed for the British mainland for repairs. 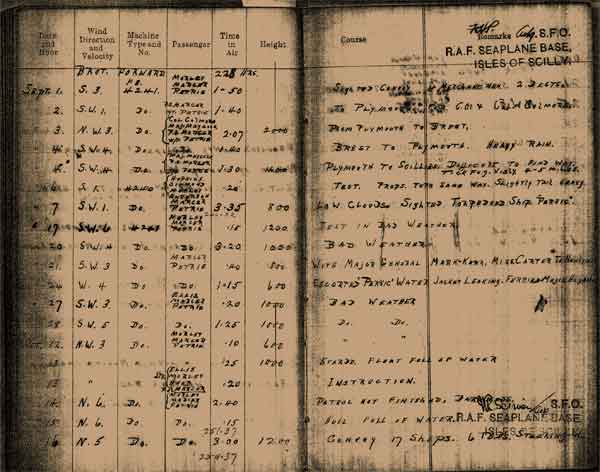 Fortunately, the flying boat crews who flew from Tresco did not have to face opposition from German seaplanes, as those operating from the east coast of England did. However, the threat of an attack on Tresco itself by a German raiding party was taken very seriously and some of the officers brought their dogs with them to help guard the island. However, in the event the main enemies were not the Germans so much as the weather and the unreliability of their own aircraft. Fog caused several flying accidents and gales were responsible for damage to aircraft even when in harbour at their moorings. In the event of engine failure aircraft sometimes had to land in rough seas resulting in damage to or even loss of an aircraft. In the course of flying boat operations from Tresco five aircraft were lost at sea, ten were damaged in flying accidents and three more were destroyed at their moorings. The human cost was five aircrew lost and one ground crew killed. 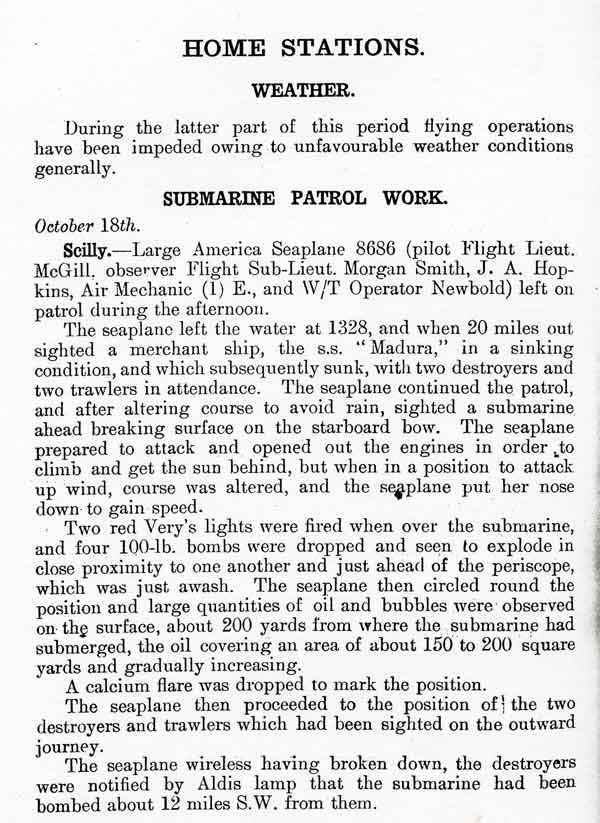 Originally the flying boat unit based at Tresco was simply referred to as Royal Naval Seaplane Base, Isles of Scilly, (the Royal Naval changing to Royal Air Force on 1st April 1918). In May 1918 the aircraft were grouped into four separate Flights numbered 350-353. These were then amalgamated into 234 Squadron in August.

As the War came to an end the number of U-Boat sightings decreased and only three inconclusive attacks were made by Tresco’s aircraft in the final seven months of the War, the last on October 11th 1918. As the anti-submarine patrols became increasingly unproductive, convoy escort then became an important part of their work. The last operational flight from Tresco was on 10th November, the day before the War ended. 234 Squadron remained at Tresco until it was disbanded in May 1919 and after that little further use was made of the base, although the RAF occasionally used it as a reserve flying boat mooring during the 1920s.

Sadly no examples of the flying boats which hunted U-Boats from Tresco have survived, but the memory of them lives on in old photographs, documents and history books. Todays’ visitors to Tresco can enjoy a meal in the “Flying Boat” club and restaurant, built on the site of the old base. The club proudly displays a painting of one of the old flying boats and an example of one of the compasses they were fitted with. The former RAF ammunition store has been converted into holiday cottages and the foundations of some of the other buildings and parts of the slipway are still there. 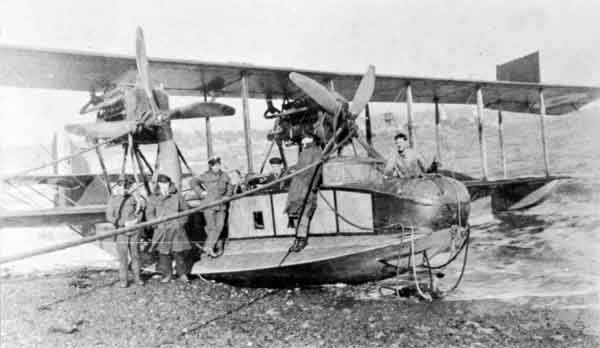 Our First World War in the Air Exhibition is supported by BAE Systems and the Heritage Lottery Fund.