This was the incredulous reaction from the beachhead master
when Women’s Auxiliary Air Force (WAAF) Nurse Iris Bower arrived on Juno Beach early
on 11 June 1944. With fellow nurse, Mollie Giles, she travelled on a tank
landing craft, becoming one of the first women to set foot on the D Day
beaches. She was later awarded an MBE for her work.

Soon after D Day, women like Iris went directly into danger
on the beaches while fighting was still taking place. They helped deliver
thousands of soldiers to British hospitals, saving countless lives.

Two days after Iris, three nursing orderlies departed from
RAF Blakehill on the first casualty evacuation flights to Normandy. It was 13
June, one week since D Day. Corporal Lydia Alford and LACWs Myra Roberts and
Edna Birkbeck; each travelling in an RAF Douglas Dakota. The moment of their
return was captured by an official RAF photographer. The welcoming party of
newspaper correspondents dubbed them the ‘Flying Nightingales’ and the name
stuck. They were the first British women on active service to be flown into a
war zone. 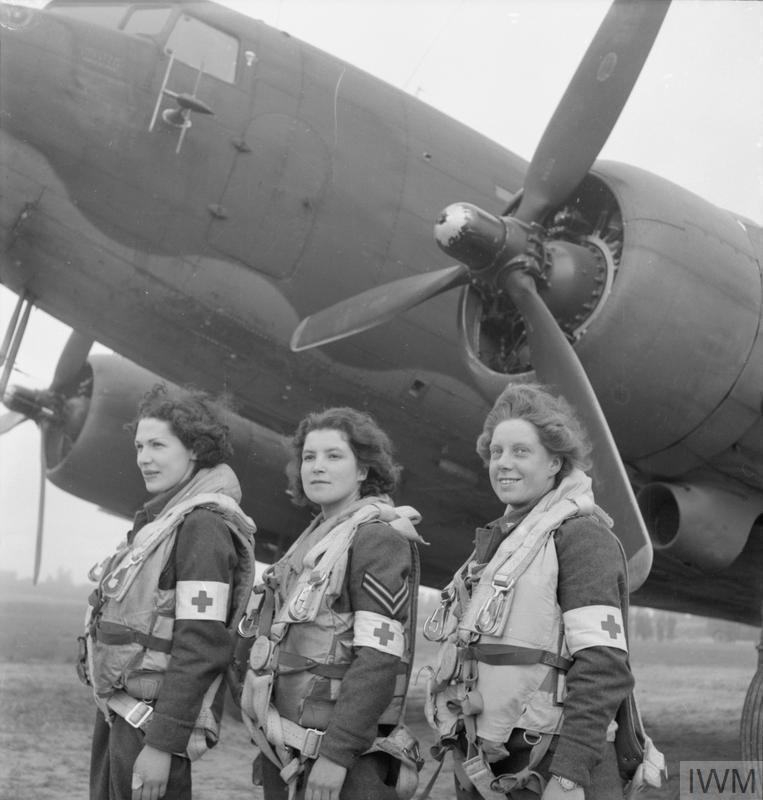 The Air Council had approved the employment of WAAF nursing
orderlies for evacuation from battle areas three months previously, in March
1944. The trade was introduced into the WAAF in 1941 and volunteers were sought
for air ambulance duties the following year. Hundreds of WAAFs answered the
call and by June 1943, over 200 had been trained. At first, they worked only in
the United Kingdom, transferring sick and injured personnel by air to hospitals
from locations across the country.

Many of the volunteers had never flown before. Their initial
training involved a six-week course at RAF Hendon where they learnt how to
treat battlefield injuries such as facial injuries, fractures and burns; how to
administer oxygen and give injections and blood transfusions. They received
further instruction in the use of emergency safety equipment and in how to
handle the large numbers of wounded they would be treating.

A crucial test was their ability to cope with the flying
conditions. British journalist Letitia Lumley noted in a 1944 article:

‘I saw some of those young women during their training at an
airfield in the south of England. They were climbing in and out of the big
transport planes, handling stretchers, familiarising themselves with the
equipment. They were waiting with some apprehension for their first flight.
Persistent air-sickness naturally disqualified them.’

WAAF members who passed the examinations were then posted to
RAF air ambulance stations. Three main RAF stations in No. 46 Group, Transport
Command were tasked to receive casualties from the Continent: Blakehill, Down
Ampney and Broadwell; later Brize Norton was used when evacuating after Arnhem.
Approaching the invasion of Europe, all personnel were confined to camp and
could not enter or leave as preparations got underway.

RAF Douglas Dakotas were adapted for the purpose of casualty
evacuation. Each aircraft could carry 24 casualties and 18 could be stretcher
cases. There was space for nine stretchers on each side, in rows of three with
the lowest on the floor and the others on racks. Eventually, the aircraft were
adapted to carry up to 21 stretcher casualties, but the load could never exceed
24. One nursing orderly was present on each aircraft with a crew of four. 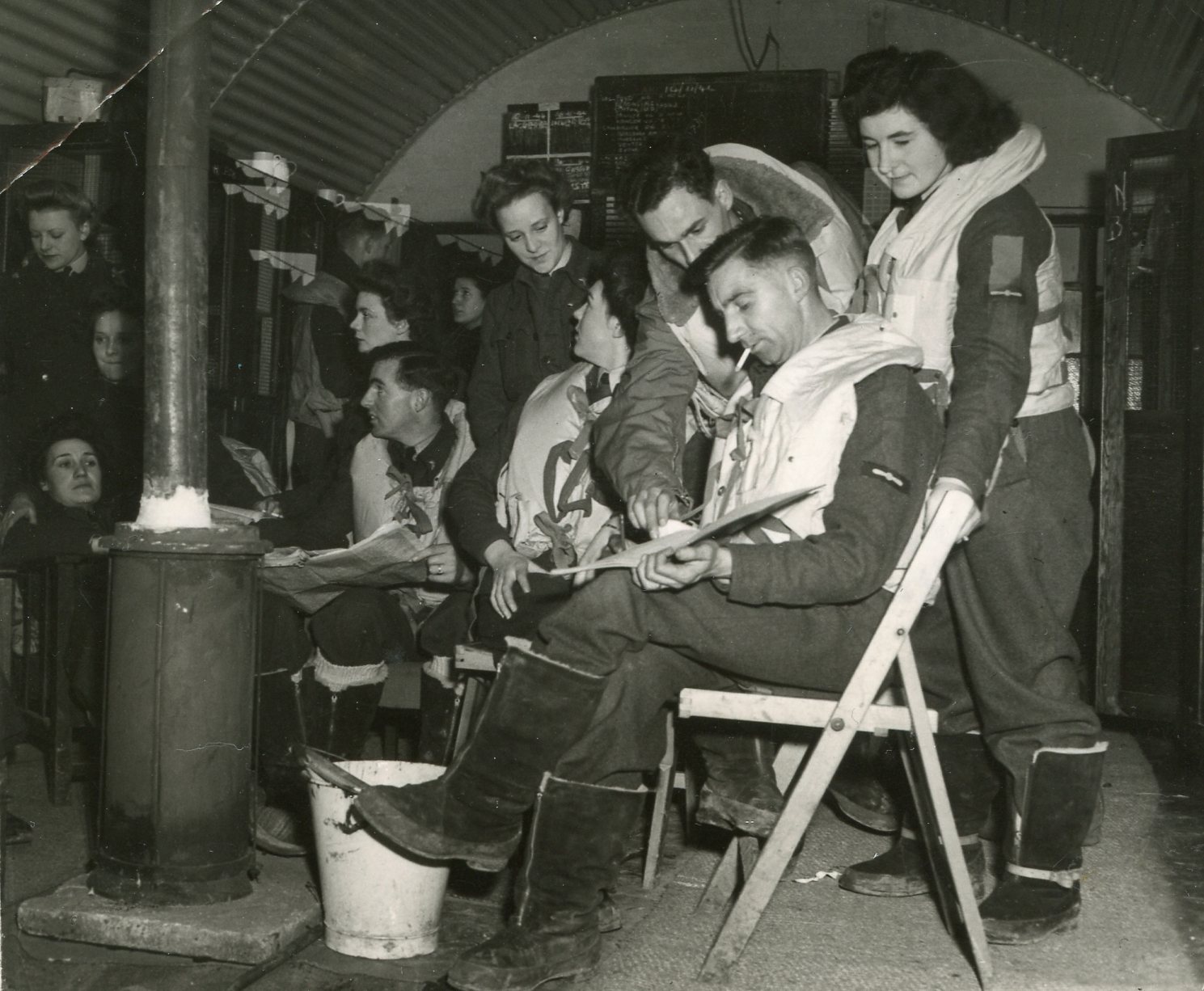 Ammunition, rations and other supplies were carried on the
outbound flight. Flying in the Douglas Dakotas was a noisy and uncomfortable
experience. There were no seats and so the orderlies stood during the return
journey or sat on boxes of supplies on the way out. Once they landed, there was
little time to offload freight and load stretchers into the aircraft. 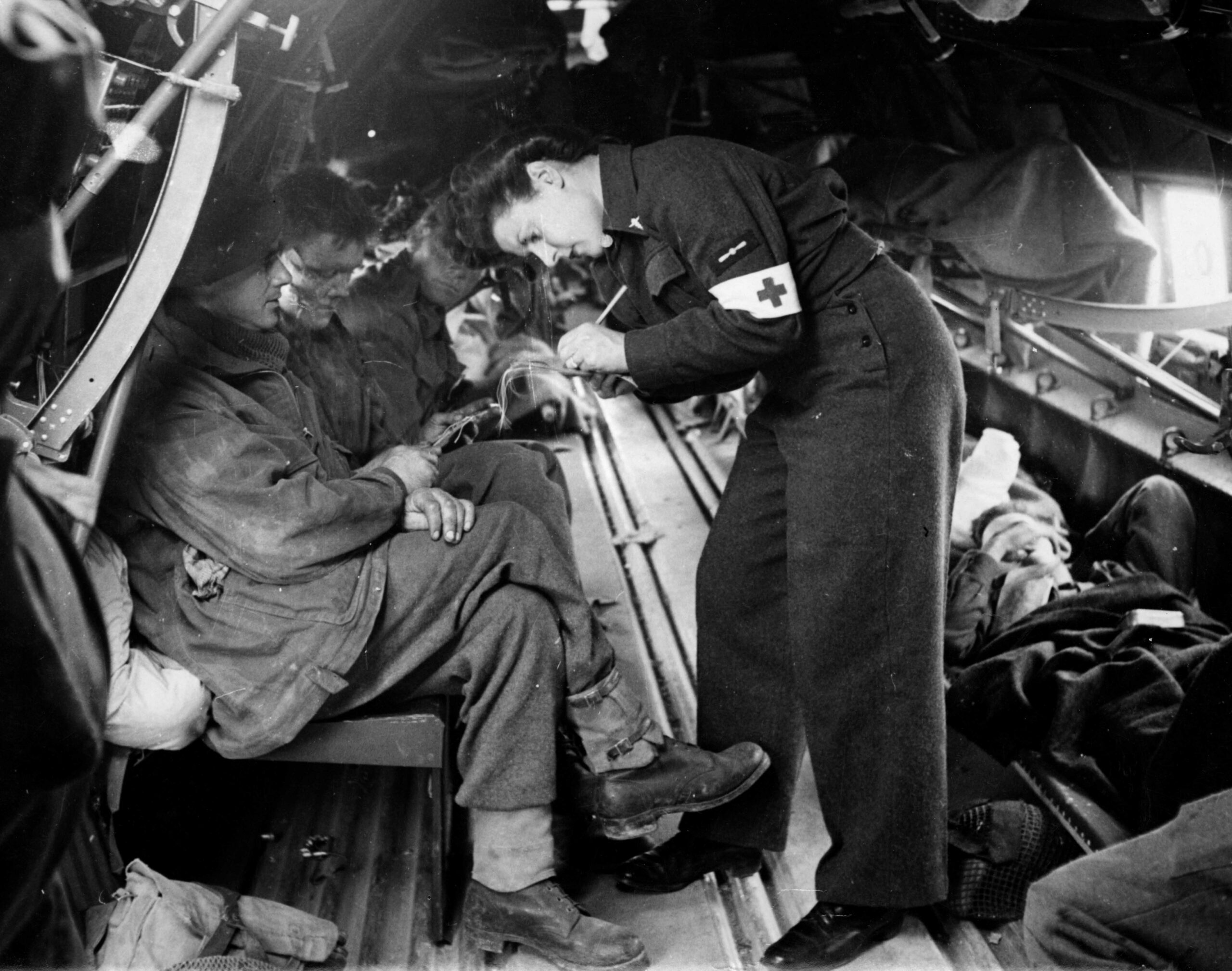 ‘Chiefly I remember the dust which was everywhere, coming up in great clouds. While the freight was being unloaded I tried to make the wounded men as comfortable as possible in all that dust. I had water to give them and panniers of tea. There was a little stray dog which came up from somewhere or other and started to play with the wounded- it cheered them up no end.’

Initially casualties were evacuated from airstrips close to the Normandy beachhead. Later a shuttle service operated, carrying casualties to bases near the coast from forward fighter airfields within 20 miles of the front line. The shuttle service was carried out by Handley Page Harrow aircraft, which had the advantage of only needing a short runway for take-off. Converted to carry a mix of stretcher and sitting casualties, they were renamed Sparrows. Each aircraft carried one nursing orderly. At the rear area bases, the wounded were graded according to the severity of their injuries and distributed either to nearby hospitals by road or flown by air ambulance to England.

On their return to England, the stretchers were carried off the aircraft at the three main airfields in England, which could each hold 300-400 casualties per day. They were situated close to hospitals and to railheads where lower priority casualties could be distributed. 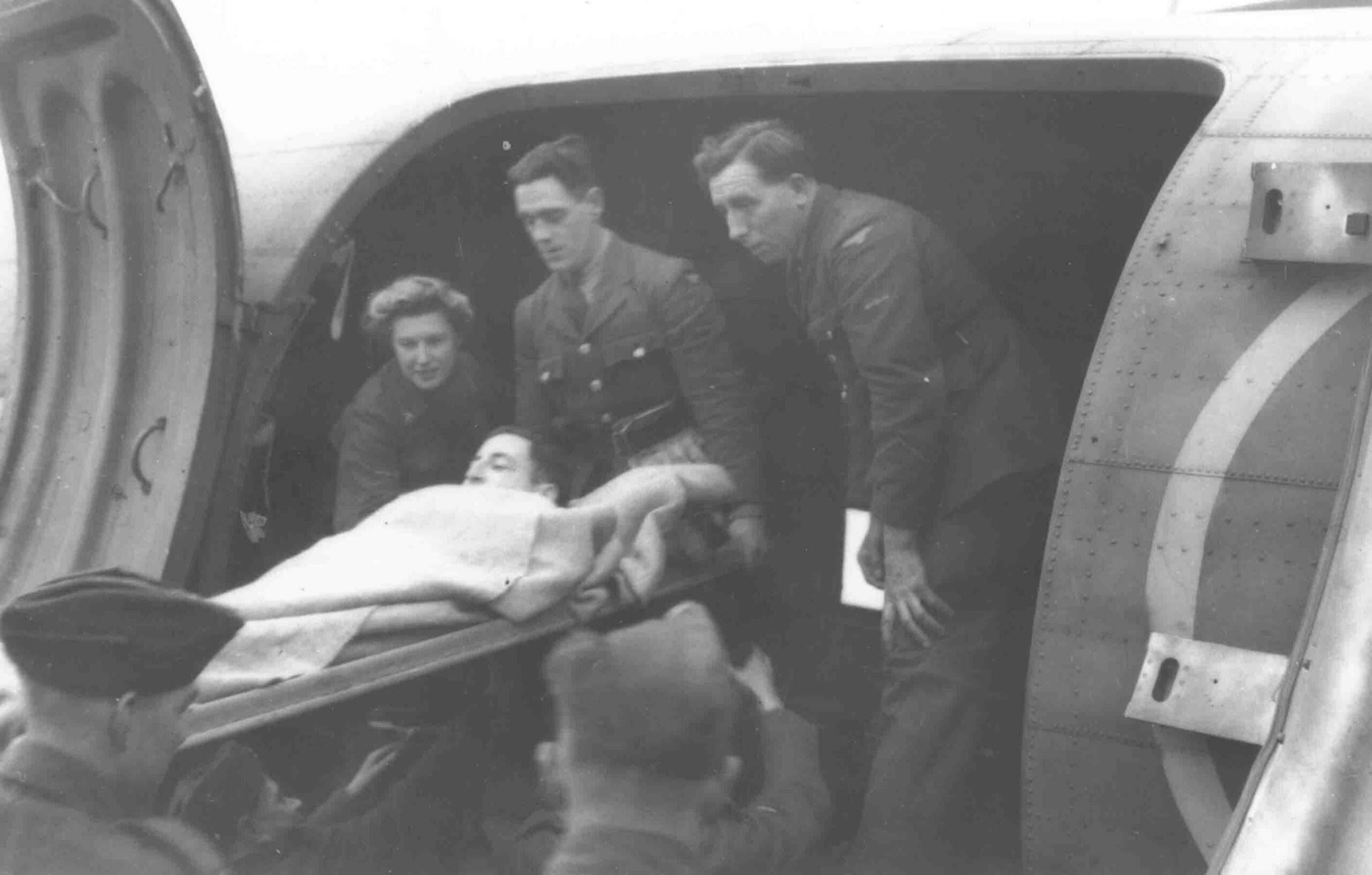 In the first month of casualty evacuation from the
Continent, 1097 stretcher cases and 467 sitting cases were evacuated with
‘Flying Nightingales’ by Douglas Dakotas from Nos. 48, 233 and 271 Squadrons.
Over 100,000 men were evacuated by air ambulance after D-Day. For the year
1944, the RAF flew 300,000 casualties in all theatres of war. 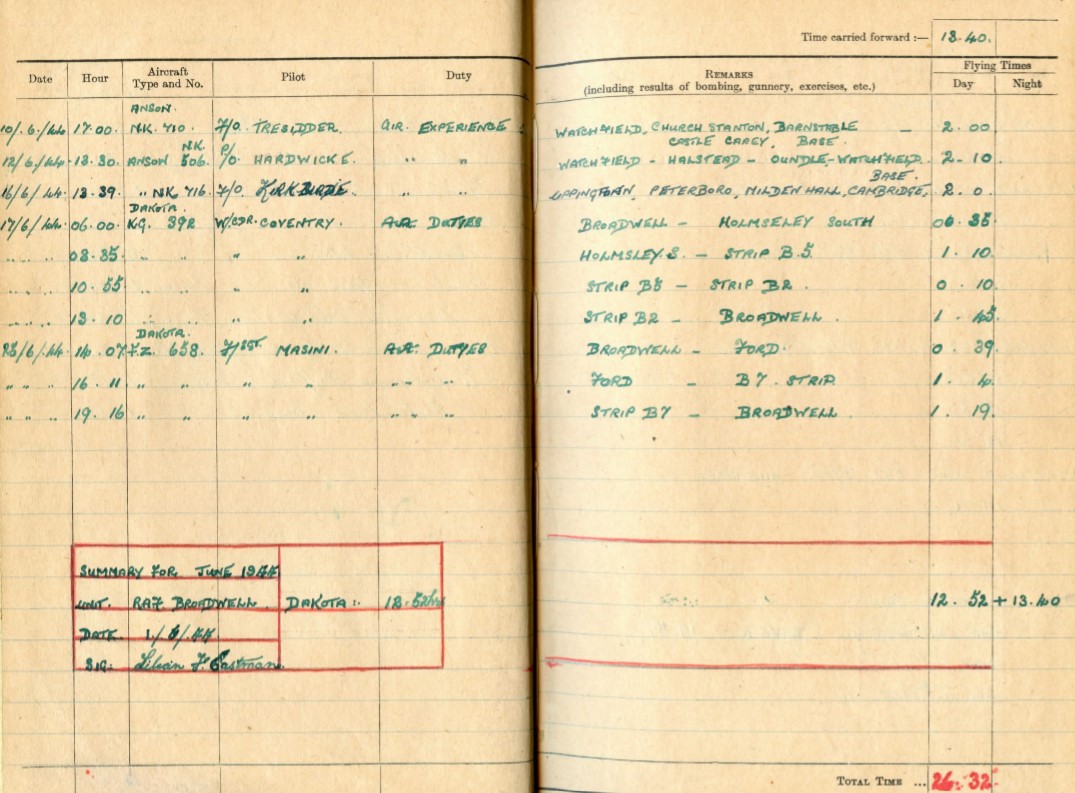 The most obvious advantage of evacuating casualties by air
was that the wounded could be treated at specialist hospitals within hours,
where the same journey by rail and sea may have taken up to three days. The
process also saved manpower and freed up other lines of communication for
military purposes.

Many of the wounded men evacuated were experiencing air
travel for the first time; knowing they would get back to Britain within hours
boosted their morale. It was felt that the presence of female nursing orderlies
on board the flights was especially comforting. LACW Edna Birkbeck remembered,
“They’d always know when we were over the coast. I’d tell them that and say,
‘it won’t be long before you get home’ and they’d cheer”.

Nursing orderlies were undeniably affected by some of the
injuries they saw. Rosa Powell recalled: ‘For me the ones who had severe burns
from flame-throwing tanks were the worst. I can still smell the burned flesh.’ However, they showed fortitude in their duties. As LACW Edna Birkbeck said, ‘you couldn’t let it get to you’.

In addition to the fear of sniper and artillery fire on the
ground, the women also faced considerable danger in the air. Their aircraft
were not marked with the Red Cross emblem, enabling them to carry supplies to
the front line. However, this meant they could be legitimately attacked by
enemy aircraft. Aircraft were frequently fired at and on a few occasions were
brought down. In the event of an attack, the nursing orderlies could not use
parachutes and were instructed to stay with the casualties to treat any crash
survivors.

LACW Margaret Walsh was killed in April 1945, when her
Douglas Dakota KG406, went down over the Channel while en route to Brussels,
killing all on board. Her body was never found. As Margaret Wilson recalled:

‘One day I came back from my flight into the hut and I saw
she was upset. She was due to go out and she had obviously seen something on
the cards. I said, ‘If you are worried, I’ll take your place on the plane. No
problem. I’m all dressed to go.’ But Margaret wouldn’t let me. I think the
middle of the next day, we were told that the plane was lost over the
Channel…I can still see her face – I can still remember her.’

‘She has distinguished herself by her devotion to duty and
solicitude for her patients and has frequently voluntarily performed nursing
orderly duties in the wards after returning tired from her flying duties. She
has shared the risks and discomfort experienced on these flights, particularly
during the early days after the assault on Normandy when aircraft were often
subjected to shelling and mortaring.’

After D Day, the work of the ambulances continued as they
carried thousands of released Prisoners Of War back to Britain and transported
people from liberated concentration and labour camps in need of urgent medical
attention.

One of the few ‘Flying Nightingales’ still living is
Margaret Wilson. Margaret was inspired to volunteer for air ambulance duties
after working as a nurse in London during the Blitz and treating terrible
injuries caused by the bombing.

She recalls a particularly memorable flight on VE Day: “The
happiest flight for me was flying back to the UK on 8 May 1945 with a group of
paratroopers who had been POWs. The captain came to tell us that he had just
heard on the radio that the war was over… I have never been kissed by so many
men! Everybody was crying and laughing”.

Today very few of the original ‘Flying Nightingales’ are
still living. LACW Ruth Jarvis sadly passed away in April at the age of 102. In
2008, their work was officially recognised when the remaining seven ‘Flying
Nightingales’ were each presented with a medal, a lifetime achievement award
and a statuette of Florence Nightingale by the Duchess of Cornwall. In
recognition of their courage, Douglas Dakota ZA947 in the Battle of Britain
Memorial Flight was painted to resemble Douglas Dakota FZ692 of No. 233 Squadron.
FZ692, known as ‘Kwicherbichen’, took part in casualty evacuation flights with
‘Flying Nightingales’ after D Day. 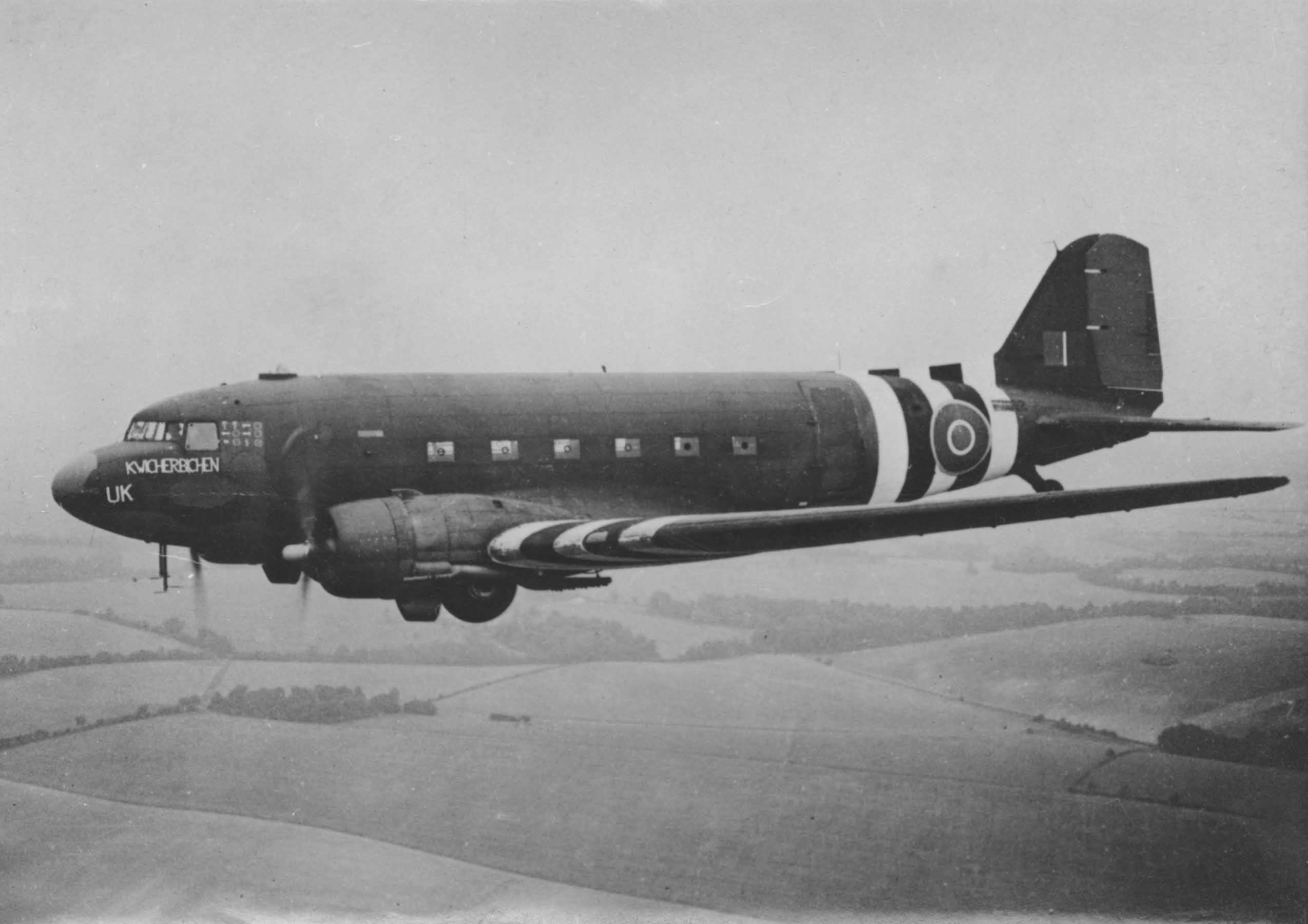 Since the ‘Flying Nightingales’, aeromedical evacuation has evolved from simply transporting casualties and keeping them alive, to mobile treatment areas using technically advanced equipment. During operations in Afghanistan, Medical Emergency Response Team Chinooks transferred casualties from the firefight to the Role 3 hospital at Camp Bastion; acting as a flying emergency room. From Camp Bastion, RAF C-17s provided aeromedical evacuation of personnel back to the UK for treatment at the Queen Elizabeth Hospital in Birmingham.

Servicewomen continue the legacy of the “Flying Nightingales” by flying into combat areas to evacuate casualties. Flt Lt Michelle Goodman was the first woman to be awarded the DFC in June 2007 after flying her Merlin helicopter into Basra under intense enemy fire to rescue a seriously wounded casualty. Without her actions, the casualty would have died within 15 minutes. Wg Cdr Charlotte Thompson-Edgar received the Associate of the Royal Red Cross Award in 2015 for her work leading Medical Emergency Response Teams treating injured troops in Afghanistan. She pioneered new clinical training methods and helped save the life of a triple amputee.