The Hampden in the Michael Beetham Conservation Centre, P1344, was built at the Handley Page factory at Cricklewood and was released to service in December 1939.

P1344’s first posting was onto 14 Operational Training Unit and consequently the aircraft didn’t fly on any operations. When the aircraft type was withdrawn from front-line duties, some of the Hampden fleet went through a major conversion program to allow the aircraft to carry a torpedo; these aircraft were designated as TB1.

Following its TB1 conversion, P1344 was posted to 144 Sqn which was stationed at RAF Leuchars and came under Coastal Command. The aircrew practiced for their new role by carrying drain pipes filled with sand to simulate their new payloads. Whilst on 144 Sqn, P1344 flew its only ‘op’ to Christiansand but the target was not spotted, so did not release its torpedo.

P1344 was tasked along with 31 other Hampdens (15 from 144 Sqn and 16 from 455 RAAF Sqn) with transiting to the Kola Peninsula in Northern Russia to carry out Fleet protection duties for the Arctic Convoys. On the night of the 4/5th September 1942, the 32 Hampdens left Sumburgh in the Shetland Isles for the 8 hour ferry flight. The crew onboard PL-K (K for Kitty) were Pilot Officer Perry (pilot), Flight Sergeant G E Miller RCAF (navigator), Sergeant James Robertson (wireless operator and air gunner) and Sergeant Daniel Garrity (air gunner). The aircraft also carried a technician on the flight – engine fitter Corporal George Shepherd. 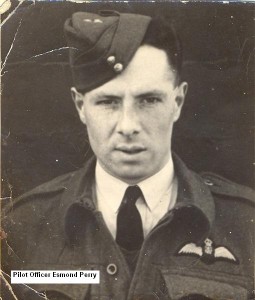 During the transit flight the outside air temperature plummeted and the aircraft started to experience icing problems and was struggling to maintain height. This caused a problem; they found that the aircraft didn’t have sufficient altitude to fly over the mountains in Sweden. The pilot changed course to fly over lower ground but unfortunately they ended up too close to a German airfield at Petsamo in occupied Finland. Whilst encountering ground fire they also witnessed two Messerschmitt Bf109s take-off and then engage them. The navigator, Flight Sergeant Miller, who was positioned in the nose of the aircraft, was conversing with the pilot, giving instructions on how to best avoid the incoming hostile aircraft. The Hampden was not a match for the German fighters and it did not take long before the pilot declared he was losing control and would be trying to land. During the air battle Sergeant James Robertson and Sergeant Daniel Garrity lost their lives.

The aircraft eventually ended up crash-landing in a wooded area in the Kola Peninsula. Due to the narrowness of the Hampden design the navigator found it impossible to move out of his position in the nose; Flight Sergeant Miller RCAF died during the crash-landing.

Pilot Officer Perry and Corporal Shepherd both survived the air battle and crash and were eventually captured, with both spending the remainder of the war as PoW’s.

After nearly 50 years sat inside the Arctic Circle, the aircraft was eventually found and was recovered to the UK via Rotterdam. The Royal Air Force Museum took ownership of Handley Page Hampden P1344 in 1992.

The project was first started at the RAF Museums Restoration Centre at Cardington and the aircraft has been in the MBCC for the last seven years. The rear fuselage section is the first component to undergo major restoration. Structural integrity of this section is nearing completion and the majority of the port internal skin has had corrosion treatment carried out, followed by an application of the final surface finish. Current projects include restoring the sidewalls of the bomb bay, structural and skin repairs on the starboard rear fuselage section and in-depth logging and photographing of the starboard internal framework, fixtures and fittings.

Following on from an email sent to the RAFM, some Hampden spares in Canada have become available for use on the project. Currently, the RAFM is in the process of taking ownership of these items.

Since our aircraft is only one of three known projects, planning is in the early stage for looking into carrying out a more in-depth restoration and conservation programme on the aircraft. Things being looked into include a Management Plan which will establish an end date for the project and identification of major components that the project is deficient of.