With the arrival of Halloween it falls upon me to make the obligatory tenuous link between the festivities and the RAF. Following on from the introductory questions on RAF unit badges I thought we’d take a look at those badges with suitably spooky imagery, and why those symbols were chosen.

Spiders and their webs feature quite frequently amongst unit badges. Spiders themselves are predators and thanks to their, sometimes venomous, bites have a reputation for being deadly. 58 Squadron RAF Regiment use a Black Widow for this reason whilst 127 Squadron, who were reformed at Habbaniya, Iraq, use a Tarantula which are common to the region.
Spider webs can be found on the badges of 30 Group HQ and 4 Balloon Centre where they represent the role of trapping the enemy with balloon barrages. Alternatively 3508 and 3509 Fighter Controller units use spider webs to represent the networks to which they belong.
4 Air Observers School also used a spider for a reason unique to themselves. They were based at West Freugh in Scotland, supposedly near the cave in which Robert the Bruce hid when he was inspired by the persistence of a spider trying to complete its web. 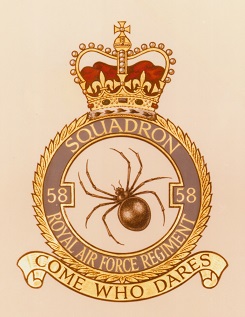 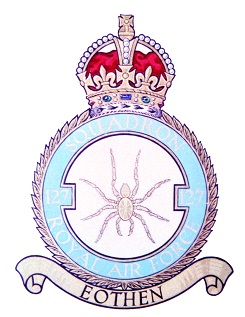 Bats are another common feature of RAF badges most frequently being used to denote nocturnal activity such as with 9 and 153 Squadrons who operated bombers and fighters respectively. 724 Signals Unit was a Ground Controlled Interception unit that controlled both day and night fighters and so featured both a sun and a bat on its badge.
Some units used the bat to symbolise the concept of tracking targets with sound waves, such as 162 Squadron which investigated enemy radar and 966 Signals Unit.
The badges of 25 Group HQ and 203 Advanced Flying School are officially described as displaying a vampire; unfortunately this is not a fanged gentleman in opera dress, although it would be apt for Halloween. In both cases this is actually a bat but specifically referring to the use of the De Havilland Vampire by both units. 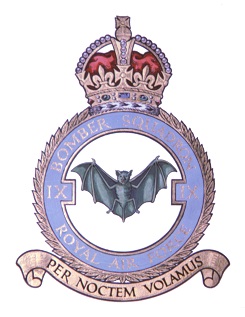 The raven, so beloved of Edgar Allan Poe hasn’t always been linked with spookiness, in fact quite the opposite. Biblically the raven was symbol of providence and it is in this role that it features on the badges of Maintenance Command and its associated units.
Another use of the raven is on the badge of 254 Squadron who operated over northern waters, they used the raven as a symbol of the Vikings who also plied the same waters. 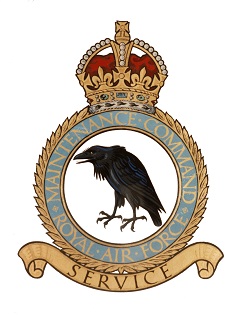 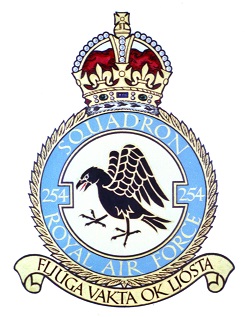 The hour glass is often found in the skeletal hands of the Grim Reaper himself and features on the badge of 218 Squadron. In this case the sand has almost run out, representing the fact the squadron was originally formed in April 1918, near the end of the First World War. 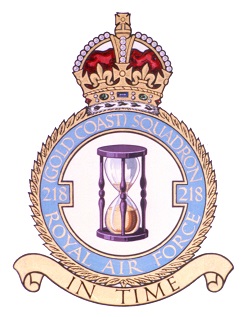 No witch would be complete without her broomstick, a seemingly mundane item that forms the badge of 40 Squadron. One of the squadrons First World War alumni was “Mick” Mannock who was always telling his men to “sweep the Hun from the sky”. 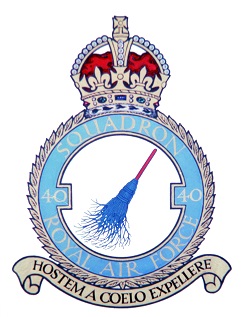 We shall conclude with what may be the most macabre of all badges. 100 Squadron proudly display a skull in front of two crossed bones on their badge, officially this is put down as “a device previously used”. It is likely that the earlier use of the badge was an allusion to the “Jolly Roger” flags displayed on the ships of pirates. 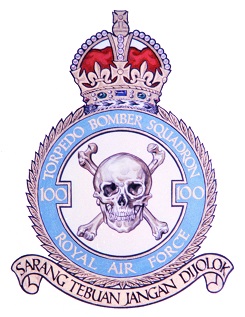 Unfortunately we’ve run out space for Owls which are probably the commonly found Halloween related badge device, how about another instalment on RAF badges featuring birds?