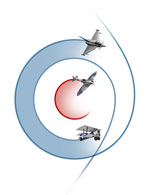 Historic Hendon is a Heritage Lottery Funded project that involves the Museum working in partnership with our local community to develop interpretation and activities that reference local area’s unique airfield heritage.

The process undertaken has enabled the Museum to look at a new way of telling stories through Co-Curation. I have previously written about the genesis and research of the RAF Museum’s Historic Hendon project here.

Co-Curation is a process that involves Museum staff, volunteers, visitors, and members of local community groups working together to discover and identify key themes that help tell the local story of the RAF in Hendon.

This blog will focus on the first part of this process: Co-Discovery.

Co-Discovery involves the local community ‘discovering’ the history local to them through a series of workshops that were held at the RAF Museum, and in community locations. The workshops were fun and interactive, including model making and crafting, and were led by our design team, Aberrant Architecture. During development of the Historic Hendon project, it was identified that many local people did not know that they were living on a former airfield. 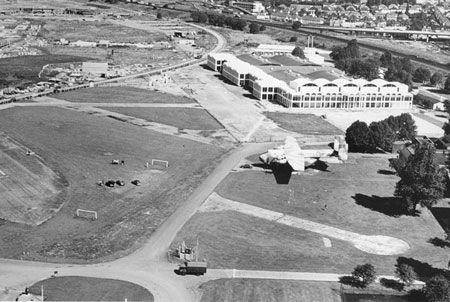 The Co-Discovery sessions sought to mitigate this, and to engage local people with their shared history. Most importantly, we wanted our residents to work closely with Museum staff, and to help us to tell their story. 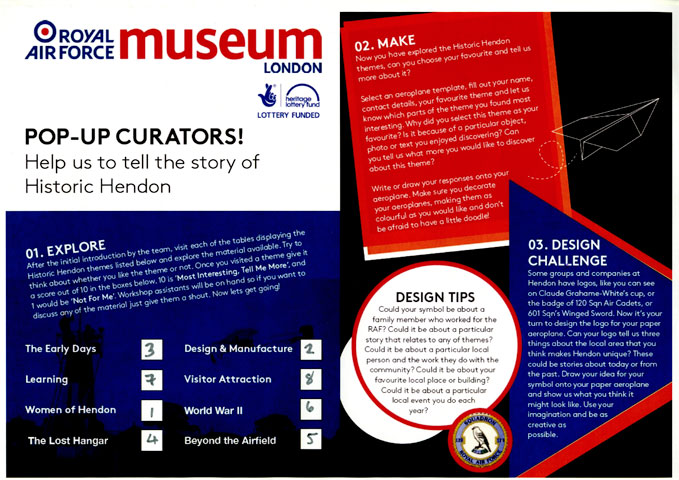 We started by identifying images, objects, stories, and people stories from the Historic Hendon collection that related to eight key themes:

– Beyond the Airfield, looking at the impact of the RAF history on the wider local communities in Colindale and Hendon

– Design and Manufacture of aircraft, other vehicles, and even a bedspread made from purloined aircraft fabric!

– The Early Days of Flight, looking at the impact of Claude Grahame-White and the opening of the London aerodrome

– Training and Learning, featuring material relating 120 Sqn ATC – our resident Air Training Corps
Hendon as a Visitor Attraction, with a focus on the Hendon Pageants, and of course the Royal Air Force Museum

– Women of Hendon, from the wartime contributions by WAAFs to the women who frequented the glamorous air shows of the 1930s, to the women sewing aircraft parts in Grahame-White’s factories

– The First and Second World Wars, and stories of what happened in Hendon at the time, including the first night air defence of a city, and residents living through the blitz. 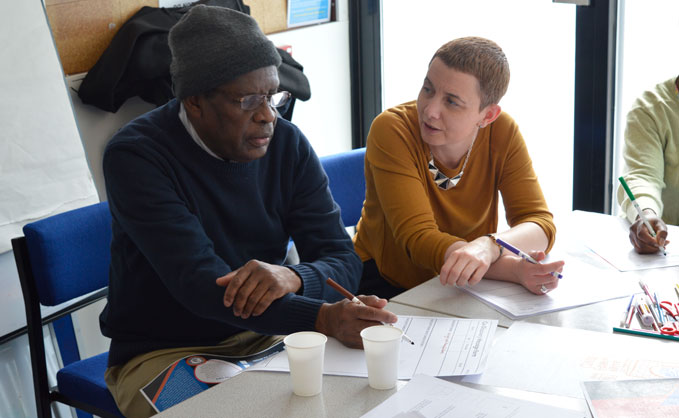 Participants looked through each table of material. This gave the participants a chance to explore the collection at their own pace, identifying stories, images and objects that they related to and thought best told the story of Hendon. Volunteers and staff were on hand to talk through specific stories and answer any questions. Using a sheet, participants then graded which themes were the most interesting to them, with a mark out of ten. This allowed us later to tot up the scores, and find out which themes went down best. The score were actually very close across the board, except for the ‘Women of Hendon’ theme, which emerged as the clear winner!

Participants then worked one-to one with RAF Museum staff using a second sheet. Firstly, they contributed their thoughts, reactions, and personal stories on the back of the sheet. Then on the front, they drew a ‘Squadron Logo’ that summed up Hendon to them. Some chose emblems associated with the history of RAF Hendon and Claude Grahame-White. Others approached it from a more personal view, using local buildings, people, and personal stories in their squadron logos. 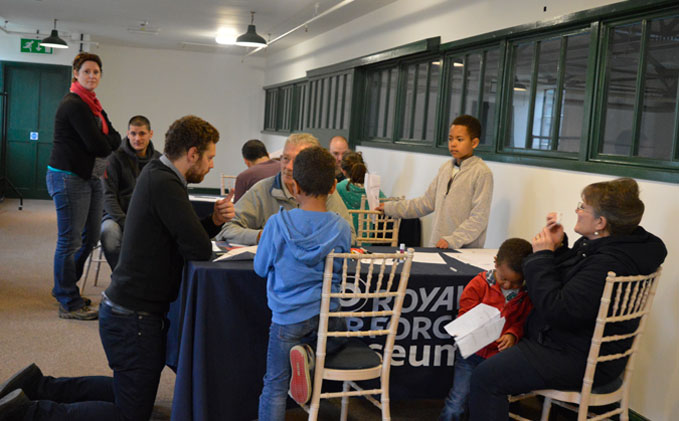 We held three workshops at the Museum, then three in community locations: The One Stop Shop on the Grahame Park Estate; the Barnet African and Caribbean Community Centre; and the Chandos Arms pub on Colindale Avenue (which definitely, definitely means going to the pub counts as work). Some people attended after seeing adverts at the museum or from our host partners, whereas some people happened luckily be there on the day. One man remarked ‘I didn’t think when I came in today I would be able to contribute to the Museum….this has sparked memories from growing up that I didn’t remember, which I’m now realising had a huge effect on me’.

In total sixty people took part across six sessions, sharing their stories, ideas and opinions. We heard from new arrivals, from people who had lived here for over forty years, and from people who had lived in the local area many years ago before moving away. Some of my favourite stories included: a lady who used to skateboard on the former runways as a child; a gent who built rafts and sailed on the Welsh Harp aged 10 (despite not learning swim till he was 38!); a lady who thought the most inspiring thing about Colindale was her ‘local hero’ Jan, the Community Outreach Work at the One Stop Shop; a man who shared a photograph of his late brother who was a Navigator in a Hercules; and a lady who brought a scrap book with her to show us the designs for the murals she helped paint around Grahame Park. 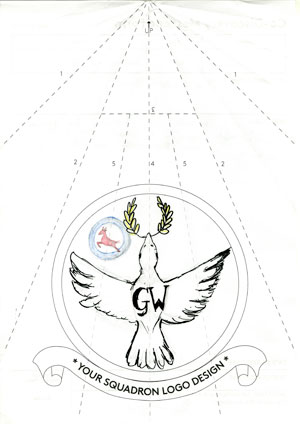 The result of the sessions was a research drawing, by designers Aberrant Architecture. The drawing represents a mix of the key themes from the workshops, and incorporates key stories and objects from the sessions, including the red socks of 601 Squadron, the Grahame-White ‘Half Cup’, and the termination letter of Miss Elizabeth Cox. 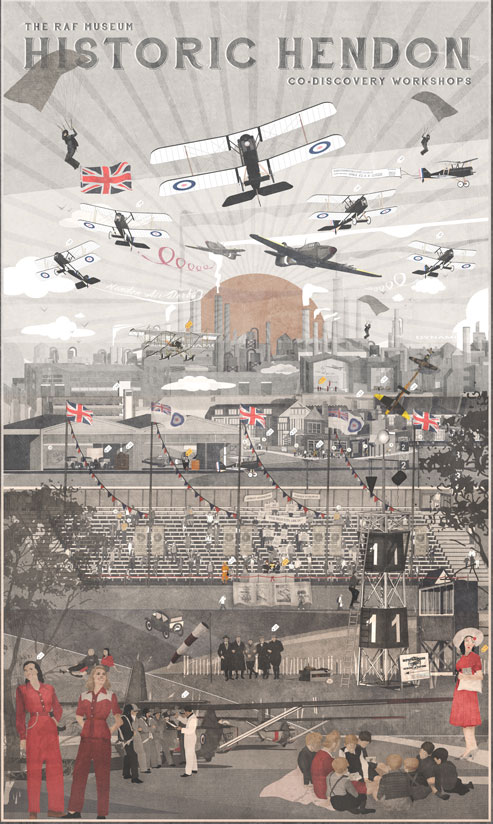 Co-Discovery is the first part of the Historic Hendon project, with work continuing in a ‘Co-Design’ phase. So far it has been very successful, and a great opportunity for us to engage with local residents, and to link up with some wonderful local partners to help deliver the sessions. We have now begun to identify the themes that the community feel best tell the Hendon story, as we begin to look at ways to tell Historic Hendon stories on the museum site through displays designed in partnership between the museum and the local community.

If you would like to see the Historic Hendon poster in full, it is currently on display in the Museum’s Main Entrance.

Explore the electronic version of the poster here. To discover its fascinating stories just click on the open book symbol located next to the item you would like to learn more about.

Historic Hendon is supported by the Heritage Lottery Fund.