In Air and Fire

This forthcoming art collection exhibition will explore artists’ responses to the Battle of Britain and the Blitz (July 1940 – May 1941) as they represented evolving machinery, communications, and urban landscapes, shaped by what was an unprecedented ‘war in the air’. Here are some insights into the works.

As sky battles unfolded across the South and East of England in the summer of 1940, seeing off enemy invasion, artists produced a pictorial record of the war, many of their works commissioned and purchased by Sir Kenneth Clark’s War Artists’ Advisory Committee (WAAC).

Modernist artists and designers, including Paul and John Nash, Graham Sunderland, Raymond Mcgrath, and CRW Nevinson imaginatively drew inspiration from the formidable forms of fighter and bomber aircraft, representing them in themes of manufacture, repair, camouflage, and aerial operations.

As the ‘personalities’ of modern warfare, planes became artists’ new portrait subjects, tantalisingly cropped, fragmented, or semi-obscured to hint at the machines’ strange, beguiling charm. For the Surrealist painter and printmaker, Paul Nash, planes were ‘Aerial Creatures’, each with their own ambiguously biomorphic – and at times anthropomorphic – identities. For him the Wellington bomber was ‘very human in one way’, a ‘baleful creature’ with ‘a look of purpose, of unswerving concentration… heroic’, and resembling ‘the whale’. 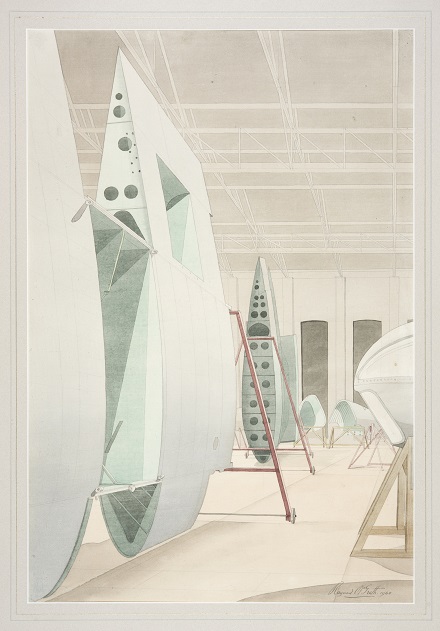 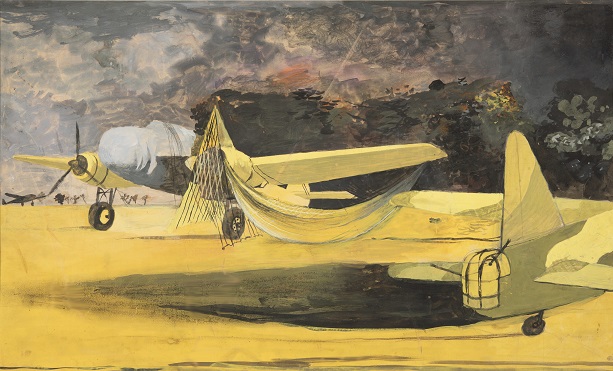 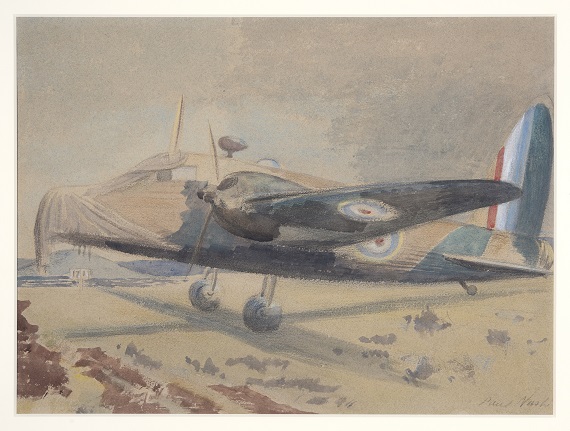 If ever more powerful aircraft inspired artists to evoke an ‘automative’ war, then so too were they excited by the expressive possibilities of other new wartime apparatus. Anthony Gross, Robert Austin, and Laura Knight enjoyed the subject of barrage balloons, which had been visible across the countryside and urban areas since the beginning of the war.

The balloon’s ungainly structure gave it an ‘other-worldly’ identity as an extraordinary voluminous behemoth, incongruous to the landscapes of every day life. Demanding the strength and agility of its operators who grappled with rigging and tethering, the balloon was an alluring subject for figurative artists – one which Knight described, somewhat absurdly, as a more powerful beast than its human servants: ‘unwieldy, she dips her monstrous bulk as the “hands” manoeuvre her like ants with an egg’. 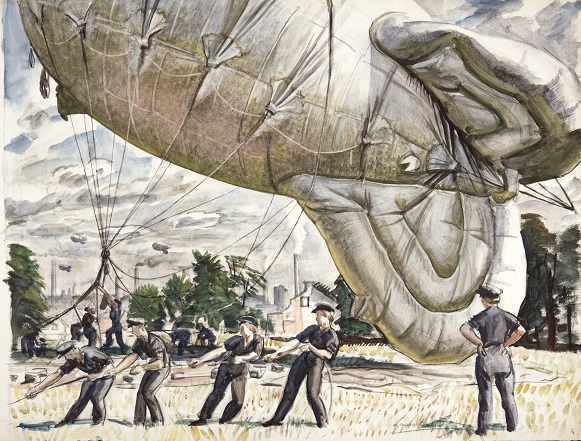 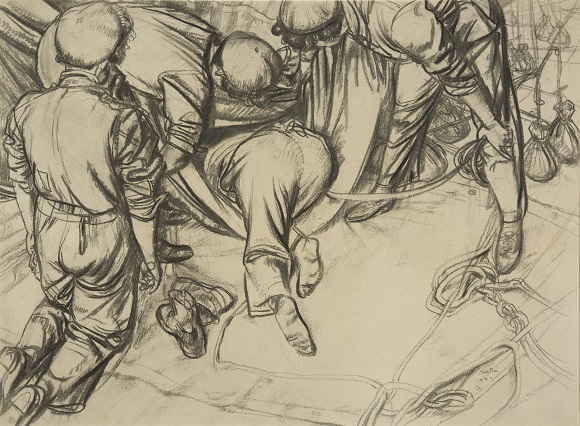 But the human presence in this war was not overlooked. In their commissioned works, Austin and Knight impressed upon exhibition audiences the vital role of the Women’s Auxiliary Air Force (WAAF) within RAF Balloon Command, as from 1941 women replaced male operators through voluntary recruitment. Furthermore, practising artists who became WAAFs, including Elva Blacker and Lilian Buchanan, could not help but document the familiar people and spaces of the RAF stations they served. Their drawings and paintings offer glimpses into goings on within the filter and operations rooms of Biggin Hill and Kenley, thereby describing women’s contribution to a revolutionary new defence and communication network – the Dowding System – as enemy and squadron coordinates were plotted by the WAAFs on tables before instructions were given to ‘scramble’ fighter planes.

As for other wartime reportage, drawing these classified activities was monitored. Artists sought authorisation through sketching permits and their works were subjected to censorship – many of which could only be shared publicly after the war. 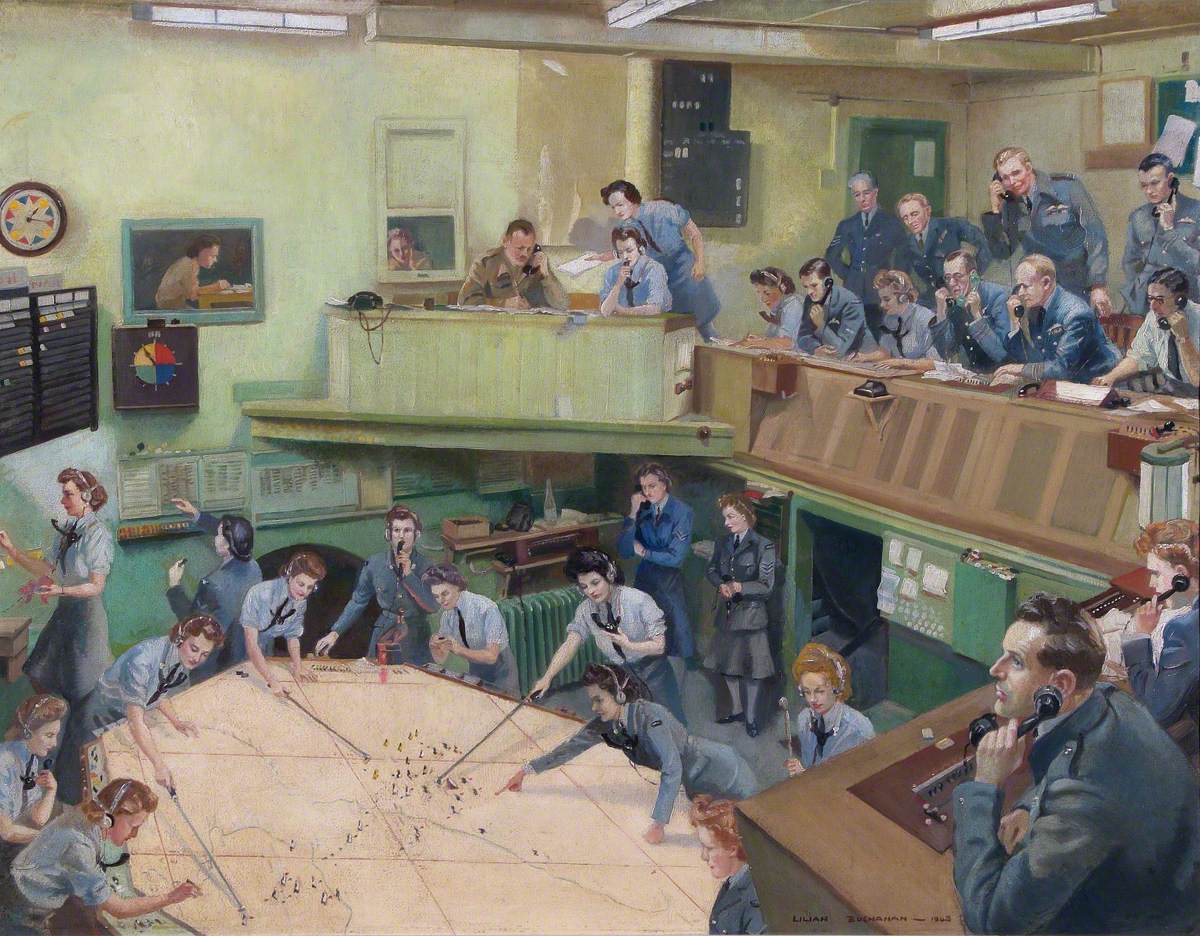 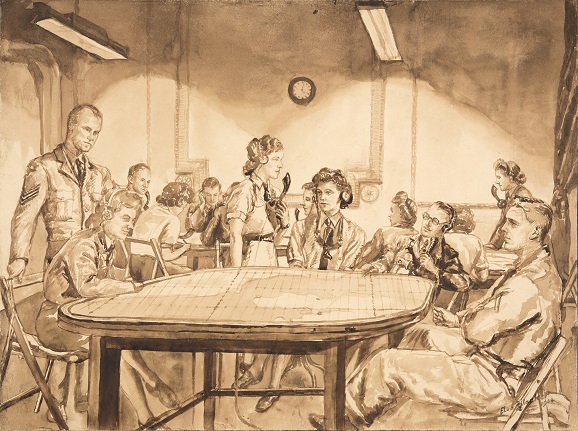 Beyond the carapaces of their machines, pilots and crew of RAF Fighter and Bomber Commands were brought to public attention in portraits by Cuthbert Orde, William Rothenstein and Eric Kennington, a selection of which will appear at the end of the exhibition.

In a sense extending Paul Nash’s commentary on ‘The Personality of Planes’ (1942), writer HE Bates contrasted the ostensible war in the air, witnessed from afar, with an unknown war enacted from the aircraft:

‘… The faces of pilots, squadron leaders, of rear-gunners, of observers, of wireless operators, of commodores – were the things that could not be seen. Watching the Battles, you saw almost everything else; the spitfires roaring to attack, the dog-fights, the fighters turning in the sun like seagulls above the slow black geese of bombers, the parachutes flowering in the summer sky, the red-hot morse of tracer bullets breaking the twilight … But what you could not see, and what I for one wondered most about, were the faces of the men who were fighting.’ 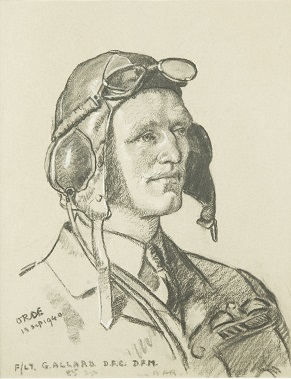 For war artist commissions, the Air Ministry sought portraiture of heroes to reinforce internal morale and promote publicly the achievements of the RAF. Conversely, the WAAC preferred more allusive propaganda and reportage that could chime with the wider public’s experiences of the war and fire the imaginations of people abroad.

Exhibitions in London, including those staged by Clark at the National Gallery, and the touring survey ‘Britain at War’ to the Museum of Modern Art in Manhattan (May to September 1941), not only enhanced public interest in British art and shaped a national identity, but served as informational channels in which visual stories of the war were trumpeted loud and clear.

Whereas in the First World War, painters (including Nash and Nevinson) were mostly messengers from the distant battlefields of the Western Front, Second World War artists were confronted with the paraphernalia and wreckage of a war played out on the home front, in which the nation was physically and emotionally embroiled.

Since the beginning of raids on Britain’s cities (August 1940), artists were moved to represent domestic subjects that spoke of people’s daily routines of shelter and civil defence. As poet Stephen Spender remarked: ‘The background to this war… is the bombed city; and the artist of this war is the Civil Defence Artist … The gulf that has separated the man of imaginative and creative power from the man-in-the-street has considerably narrowed. Both live now among the same grim realities’. Indeed, artists lost homes and studios in the raids.

In a letter to the Ministry of Information, RV Pitchforth made light of his adverse working environment: ‘Since my studio has been blown up, finding a place to work is not easy. Light is not difficult to find without cover, nor is cover without light but I can’t get both’. And Olga Lehmann recalled the fate of her Hampstead home:

‘… On approaching our house, I realized it had taken a direct hit and lay in rubble. In a daze, I walked around the back and now noticed that half the building had actually been left standing … Somehow, still in my daze, I managed to clamber up the rubble to what remained of our living room and found everything scattered everywhere. On the floor lay the telephone which, amazingly, still had a dial tone. I dialled the emergency number … By this time one of the Air Raid Precautions men had spotted me, yelling that I had no business to be up there and to come down at once.’ 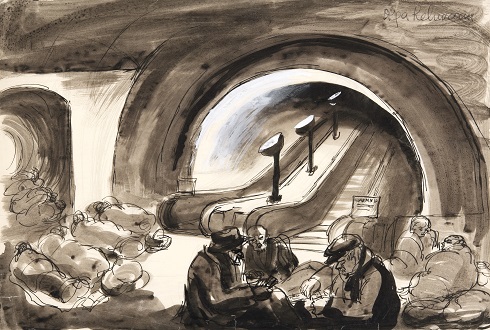 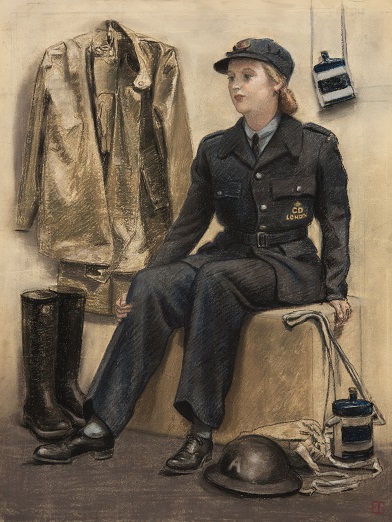 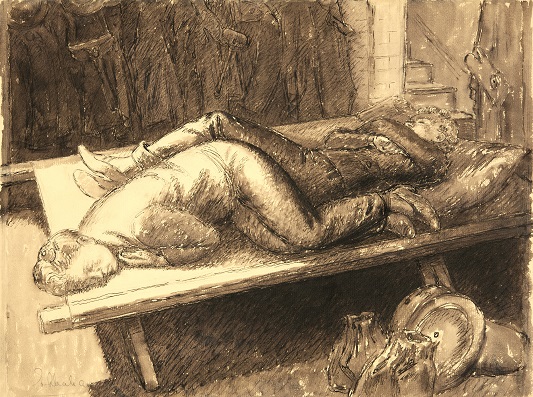 Subjects such as Air Raid Precaution and fire services, ambulance and rescue work, and communal refuge, were now common to the commissioned works of well-established painters. But so too did they abound in the works of women artists as jobbing volunteers engaged in those causes, many of them overlooked for commissions by the patriarchal WAAC, including Olga Lehmann, Rachel Reckitt, Enid Abrahams and Elsie Gledstanes, some of whose works were, however, selectively purchased for the nation.

While the ubiquitous theme of public sheltering (such as in the renowned drawings of Henry Moore) was encouraged as a propagandist motif of cohesive spirit, Reckitt, who undertook relief work in London’s East End, found herself disillusioned with the local authority’s lack of support for homeless families and refugees. Not content to perpetuate a ‘myth of the Blitz’, in letters home to her family in Somerset she wrote:

‘The LCC [London County Council] officials all need shooting; they kept hundreds of homeless people waiting from 8:30am to dusk today for buses to evacuate them, which never came and which in the end they admitted they had known would never come.’

‘Lorry loads of clothes keep coming from America now and it is left to the ARP [Air Raid Precautions] Wardens to distribute them. This means they give them to their friends and sell them to anyone else who looks in, a very profitable occupation for them, but not, I feel, what the donors intended. They hinted that I could have my pick of a new pile of 1000 piles of new and nearly-new smart American shoes.’ 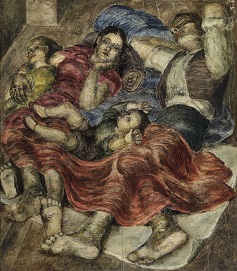 By far the most common propagandist subject of the period was the Blitzed landscape. The WAAC encouraged representations of blasted city landmarks in apocalyptic disarray (most notable in the works of Graham Sutherland and John Piper). Such visions were reproduced across the world as expressions of Britain’s plight and fortitude when it was hoped that the still neutral United States of America could soon be stirred into military support.

With a starker visual language, modern representations of urban chaos reworked an old tradition in British art – the ruin scene. In updating a time-honoured motif, suggestive of the country’s Romantic past, artists enshrined the memory and persistence of British culture. Eve Kirk’s ‘St Paul’s Cathedral’ and Anthony Gross’ ‘Oxford Circus’ appear as dystopian views of a much-loved cultural heritage. 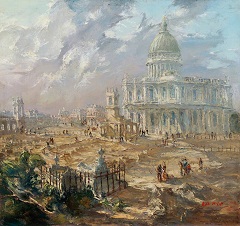 Soon after fleeing Nazi Germany for England in 1937, Walter Nessler painted his most famous work, ‘Premonition’, foretelling a London Blitz. The devastation wrought in the Spanish Civil War had been on his mind and was most palpable in Picasso’s renowned painting of the same year, ‘Guernica’, which lamented the Nazi and Fascist bombing of the Basque Country.

Nessler’s imagined London after a German raid is an uncanny vision. St Paul’s Cathedral rises from an inferno of twisted steel girders, shattered buildings and scattered buses, while a gas mask looms as a grim ‘memento-mori’, portending human tragedy. A camouflage-patterned horizon surrenders to a menacing veil of blood-red light, the scarred built environment symbolising a wounded civilisation. 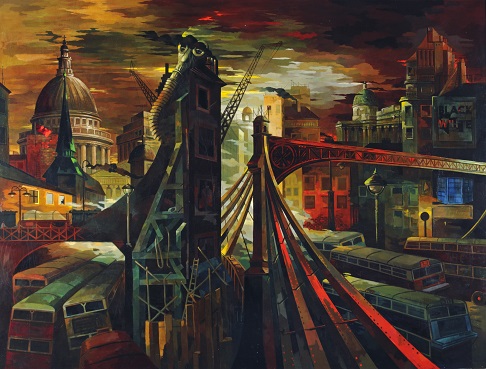 The Blitz claimed 44,000 lives and 60,000 serious casualties. Yet surprisingly few such pictures portrayed scenes of death and fear. imposing a stoic dignity on war art subjects, violence could only be tacitly communicated through distressed landscapes, while more literal human activities denoted perseverance over panic. When Carel Weight‘s dramatically absurd scene of a bomber-pursued trolley-bus, ‘It Happened to Us’, strayed from a brief to record suburban ruins, the WAAC declined it, issuing him with a clear statement of priorities: ‘to show how the ordinary affairs of life were being carried on in spite of the effects of the Blitz’. 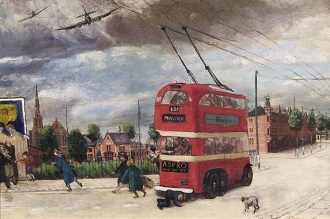 Claude Rowberry, however, a London-based lieutenant colonel in the British Army during the war, flouted convention – that is, with the artistic licence of a gifted amateur. Rowberry’s works graphically reveal the human cost of air raids – of bodies amid debris, and of expired persons sat upright in bed, advertently seen in the light of torn-off walls.

Throughout his life, Rowberry kept his drawings hidden away from family and friends in a black padlocked trunk; they were later to be found after his widow’s death in the 1960s. We can guess at the reasons for his reticence. Had this to do with confidence, or ‘survivor’s guilt’? Clearly for him, drawing was an expressive outlet, guided by an impulse to perceive and understand – and, evidently, these sketches were highly personal accounts, not made in earnest for an audience but for himself.

As the exhibition will reveal, artists’ interests to interpret this war of ‘air and fire’ were diverse – influenced by the exigencies of employment; excited by new subjects to represent; and driven by a will to express experiences both shared and personal. Seeing these works together offers a rare insight into the diverse backgrounds and perspectives of war artists – from the prominent members of the British School who were officially commissioned, and the formerly overlooked contributions of women artists, to the work of the ‘civil defence artist’, the exiled artist, and the amateur ‘outsider artist’.

Julia is the RAF Museum's Curator of Fine Art. Julia is a curator and writer specialising in nineteenth and twentieth century British art, particularly works on paper. Her interests include the Romantic watercolourists, the history of art school education, Second World War modernism and its institutional histories, and postmodern printmaking. She is author of 'A Century of Prints in Britain' (Hayward Publishing, 2017). She joined the Museum in 2019