The RAF Museum is more than an aircraft museum, it aims to tell the whole story of the RAF its people, aircraft and operations, however the arrival of new aircraft into the collection still elicits excitement. The Centenary redevelopment saw two new additions to the Museum’s collection, these being the Sea King in ‘RAF Stories’ and the Sepecat Jaguar into the ‘RAF in an Age of Uncertainty’ exhibition, for which I was the lead curator.

While writing captions for exhibitions we aim to keep them short and snappy as there is so much for visitors to see, read and do, but sometimes 75 words don’t seem enough. So I thought I would take this opportunity to expand upon the history of the Jaguar and put it into the context of the period in which the Museum’s example, XX824, served. 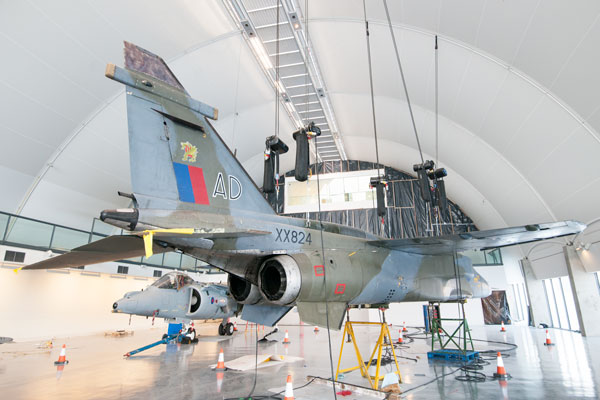 The Jaguar retired from service just over a decade ago, without the media attention that surrounded the Harrier’s retirement in 2010. It rather slipped unnoticed into the pages of RAF history, indeed, even when in service it had a reputation of being under-powered and having the turning ability of a ‘brick’. However, for ten years from the mid-1970s it was the lead strike/attack aircraft of the RAF, it was also the first aircraft in RAF service to be produced by an international partnership, a model which is now common in military aircraft design and production.

The Jaguar story started in 1964 when both Britain and France were looking for an advanced jet trainer. In what was at the time an innovative international partnership, the two governments recognised the financial benefits of collaborating on a design that would provide a single aircraft which would meet both the training role and the additional French requirement for a light strike aircraft. A memorandum of understanding was signed in May 1965 and work began on developing an existing design from the French Breguet company, the BR.121 into a production aircraft. Breguet and the British manufacturer BAC formed a joint company, the Société Européenne de Production de l’Avion d’École de Combat et d’Appui Tactique (SEPECAT), to design and build, what was to become the Jaguar.

The manufacture of components was split equally between the two nations, the nose, fuselage centre section and undercarriage were manufactured by Breguet while BAC produced the wings, tail unit, rear fuselage and air intakes with a final assembly line in both countries. Engine production was also a collaborative project between Rolls-Royce and Turbomeca, which continued the Rolls-Royce convention of naming its engines after rivers, in this case the Adour, a river in the South-West of France.

As work on the yet unnamed advanced jet trainer progressed, the RAF were in the process of procuring replacements for Canberra and Hunter aircraft operating in the strike/attack role. However, the mid-1960s witnessed a turbulent period in military aircraft procurement. In 1964 the RAF abandoned the development of the Hawker P1154 in order to save the TSR2 which itself was cancelled the following year due to escalating costs. With no new aircraft in the pipeline, the RAF committed to purchase the F-111 from America, but cost over runs and a weak pound lead to the cancellation of the order in 1968, meanwhile the French had pulled out of the AFVG (Anglo-French Variable Geometry) project. This left the RAF facing a capability gap in strike/attack aircraft. 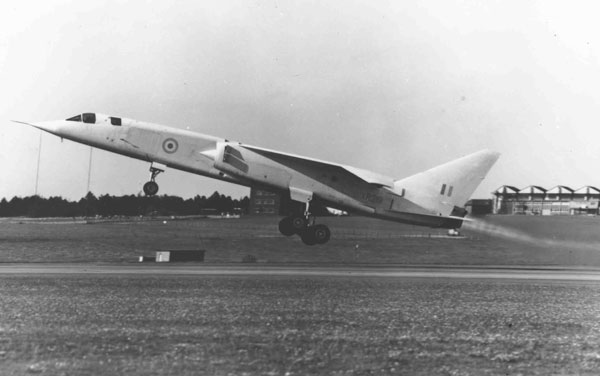 To plug the gap the RAF reluctantly accepted the Buccaneer into service, which they had resisted in preference for the TSR2. F-4 Phantoms were also purchased from America. These setbacks in aircraft procurement lead the RAF to re-evaluate their order for the Jaguar. The original order for 150 advanced trainers was changed in 1967 to include 90 strike variants and 110 trainers. This was amended again in 1970 to 165 strike aircraft and 35 twin seat trainers for operational conversion only.

The Jaguar that entered RAF service was a much more advanced aircraft than had been envisaged less than ten years before, it was equipped with some of the most advanced digital technology of the time with a central computer, head-up display, navigation attack system, laser range and targeting system and a projected moving map display. In the following film from the Museum’s collection, Group Captain Bill Pixton and former Chief of the Air Staff, ACM Sir Glen Torpy recall their experiences and opinions of flying the Jaguar in the mid-1970s.

Deliveries of Jaguars to the RAF began in 1973 where it would eventually equip eight squadrons. Three squadrons were stationed at RAF Coltishall in the UK, where they formed part of the Allied Commander Europe’s mobile force for rapid deployment overseas in time of crisis. During the Cold War, it was envisaged that Jaguars would deploy to help defend NATO’s vulnerable northern flank, two squadrons in a ground attack role, would deploy to Denmark, the third Squadron No. 41, operating in the tactical reconnaissance role would deploy to Bardufoss inside the arctic circle in Norway. 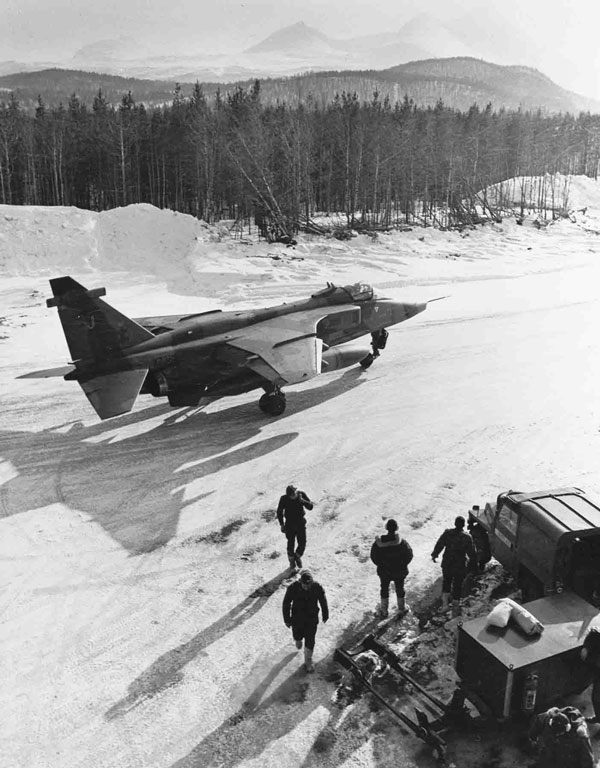 The biggest user of the Jaguar was RAF Germany where it was operated by five squadrons. Four squadrons were based at RAF Brüggen, the first of which, No. 14 Squadron stood up in April 1975, where Jaguars began replacing Phantoms in the strike/attack/reconnaissance role thereby releasing Phantoms to replace Lightnings in the Air Defence role; and it was to No. 14 Squadron that the Museum’s XX824 was delivered in late 1975. The fifth Squadron, No. 2 Squadron, stationed at Laarbruch operated Jaguar in the Tactical Reconnaissance role. 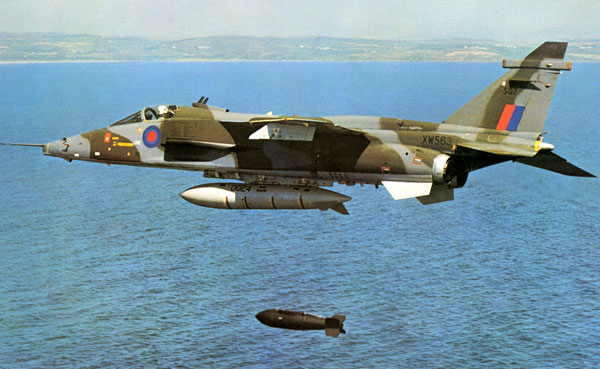 The Brüggen Jaguars were RAF Germany’s frontline aircraft, ready to respond to any aggression from countries of the Warsaw Pact in central Europe, flying mostly at low level in order to penetrate Warsaw Pact air defences the Jaguars fulfilled two roles. One or two aircraft from each squadron maintained a 24 hour a day nuclear Quick Reaction Alert (QRA), which could be launched at 15 minutes notice in response to the Supreme Allied Commander Europe’s (SACEUR) request for strikes. Such strikes might be conducted individually or as a part of a much larger response to acts of aggression. The other role was conventional attack against a variety of predetermined targets, such as Warsaw Pact airfields and bridges, Jaguars would also have been expected to attack formations of tanks and to interdict the movement of reinforcements to the frontline in order to prevent allied ground forces being overwhelmed.

Group Captain Bill Pixton, a pilot on No. 14 Squadron, recalls what it was like to stand nuclear QRA, the theory of dropping a nuclear weapon and the strike/attack roles of Jaguar in RAF Germany during this period.

To many serving in Germany, there was a different atmosphere compared with service in the UK. A sign at the entrance to RAF Brüggen read, ‘The task of this station in peace is to prepare for War. Don’t you forget it.’ Units stationed in Germany remained at a constant high level of alert with a number of aircraft on permanent QRA, also to ensure maximum preparedness exercises would continually test RAF units and stations with MINEVALS (monthly station level evaluation exercise), MAXEVALS (higher level evaluation exercise with external evaluators) and the dreaded annual tactical evaluations (TACEVALs) that could be sprung at a moment’s notice and last for up to five days. This is where a whole station would act as though it was at war, flying near operational sorties while all ground personnel wore NBC (Nuclear, Biological & Chemical) clothing to simulate wartime conditions. 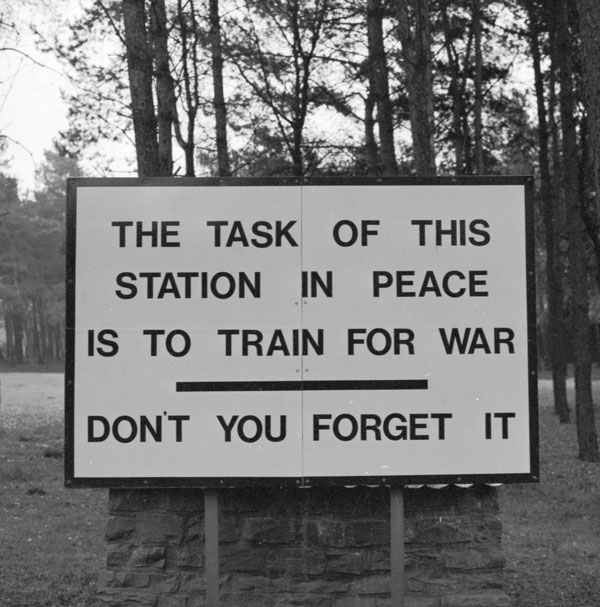 The Museum’s Jaguar XX824 served throughout this period with No. 14 & No. 17 Squadron being upgraded to GR1A standard in 1983 with improvements to the chaff/flare, navigation and electronic counter measures systems and the introduction of Sidewinder Air-to-Air missile. However, in a twist to the tale, the AFVG project that the French had abandoned in the late 1960s had been resurrected and thanks to a very successful international collaboration, came to fruition as the Panavia Tornado which began replacing Jaguars on the Cold War frontline in 1984.

XX824’s frontline service ended in 1985 as the final Jaguar squadron stationed a Brüggen reequipped with Tornado. It was one of 35 airframes sent to RAF Shawbury for storage. Allotted maintenance serial 9019M in January 1990 it was delivered to No. 1 School of Technical Training at RAF Halton for use as a ground instructional airframe for training aircraft fitters, later moving to RAF Cosford in 1993. 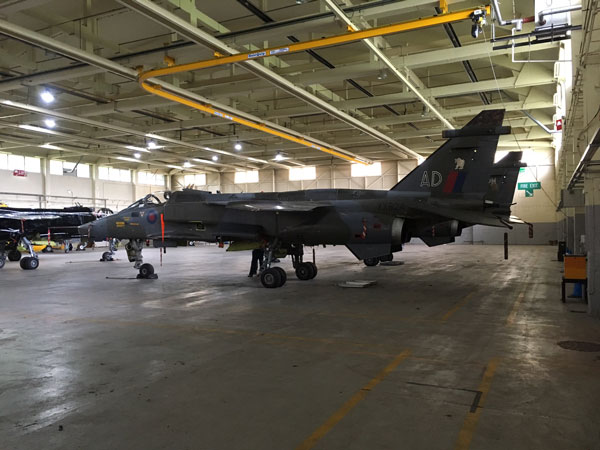 Although XX824 never flew operationally again, with the end of the Cold War, the RAF entered a period of almost continuous operational deployments in which Jaguar played an important part. A Jaguar force of 12 aircraft deployed to the Gulf following the Iraqi invasion of Kuwait in 1990. Commanded by Gp Capt Bill Pixton, Jaguars flew over 600 sorties without loss against tactical targets such as missile and artillery sites as well as flying anti-shipping and reconnaissance missions. 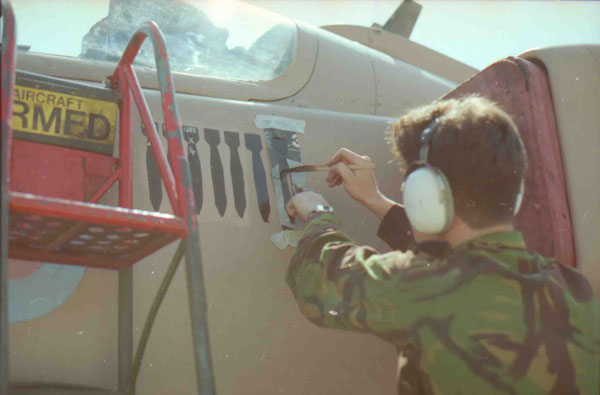 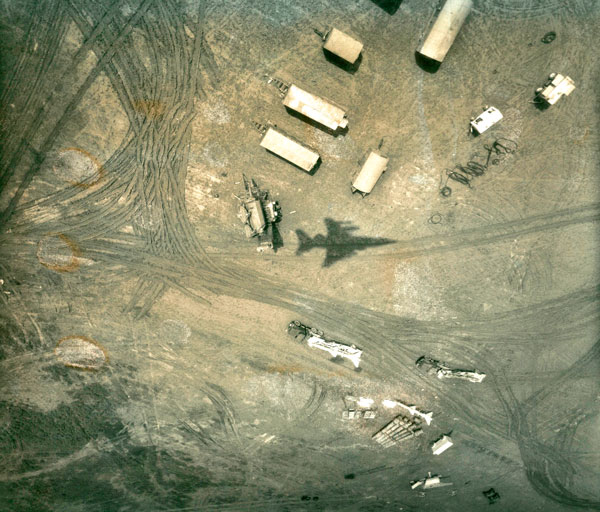 Jaguars were due to be used during the 2003 Invasion of Iraq, but the Turkish government forbade coalition aircraft based in Turkey from participating in the invasion and despite the recent upgrades, a Defence White Paper in 2004 brought forward the retirement of the type by two years with an out of service date of October 2007. With only five days notice this date was brought forward to 30th April 2007. 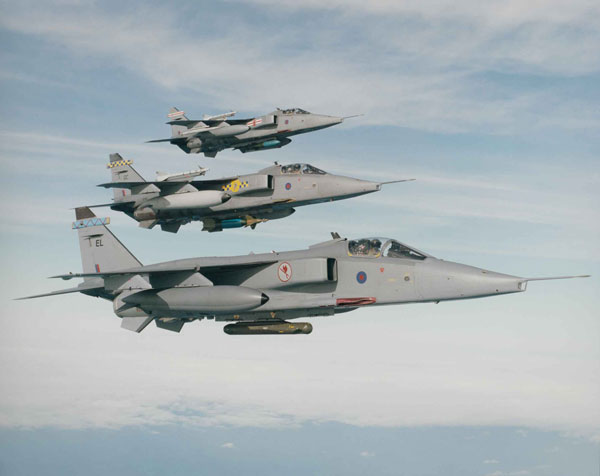 Apart from operating with the RAF and the French Armee de l’Air, Jaguars served with the Nigerian, Ecuadorian and Omani air forces and the Indian Air Force where the type is still in use, recently announced an upgrade that will potentially see it remain in service in India until about 2038, nearly 70 years after its first flight.

This concludes my canter through the Jaguar’s service with the RAF, however, the Museum has very little knowledge of the history of XX824 other than dates and units with which it belonged. Did you fly or service XX824, have you any photographs or footage of XX824 in Germany? If so I would be delighted to hear from you.