On 25 July 1909, it was inventor, industrialist and pioneer Louis Blériot who demonstrated what the future of the aeroplane would be. Blériot was already remarkable in that at the turn of the century he had invented the world’s first practical car headlamp which he now sold to the major French car manufacturers. He then turned his attention to aviation and over the course of the intervening years, designed and tested a series of aeroplanes, the first unsuccessful but ultimately resulting in the world’s first successful monoplane design, the Blériot VI, in 1907. His Blériot VIII of the following year was the first design to complement a hand-held control column with foot operated rudder bar: flying control elements that are standard in present-day aeroplanes. Ultimately, he decided to concentrate on his most successful: the Blériot XI. 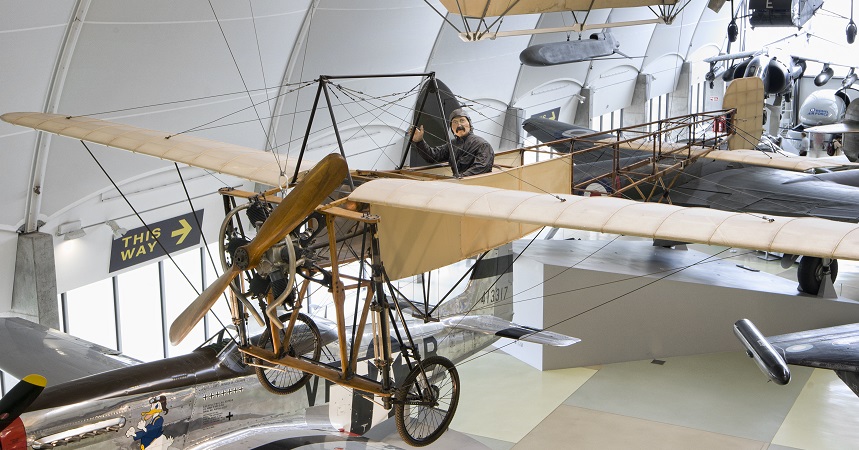 The construction of the Blériot XI is a lesson in 1909 simplicity and efficiency. Fuselage frames were constructed from hardwoods such as ash and poplar that could bear the weight of components like the engine, propeller and pilot! Interestingly, this same wood was used in the framework of the wings. The fuselage was a simple steel wire-braced wooden box girder. Only the forward half was enclosed by rubberized waterproof fabric to provide protection against wind and weather. To provide power Blériot had teamed up with motorbike manufacturer Alessandro Anzani who had supplied the three-cylinder partial radial engine that provided enough power for minimal weight. He had in turn partnered with Lucien Chauvière who provided finely tuned laminated walnut propellers for this engine, which were attached directly to the crankshaft. 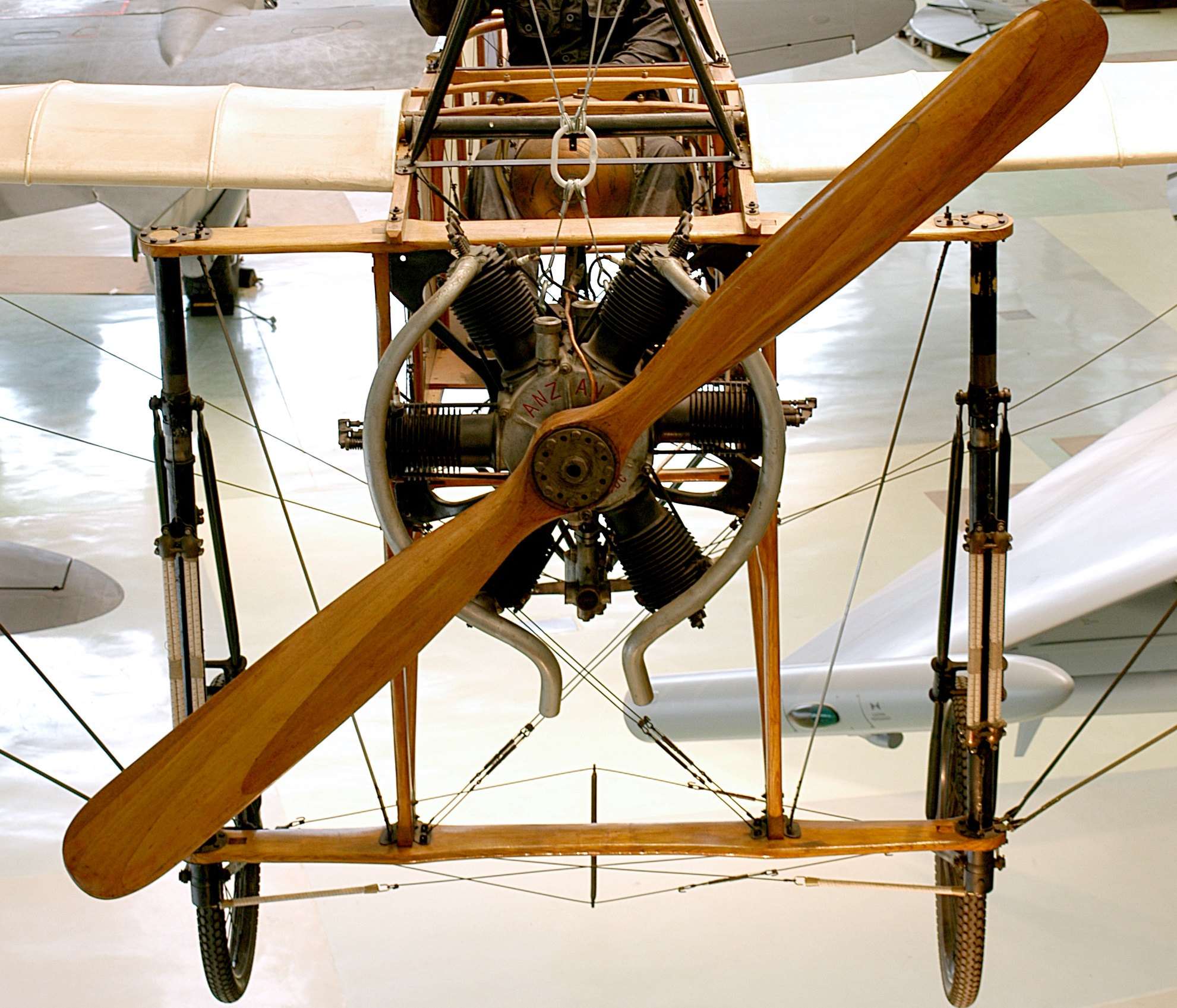 The engine and propeller were positioned at the front of the design: the ideal position for optimum traction through the air. Wings were thin for speed, deeply arched and broad from front to back to maximise on the Bernoulli characteristic to provide lift. They were set at a dihedral (curved upwards) to enable stability and easy recovery if buffeted by side-wind. They had no aileron flaps, but in common with other designs of the time had warping wing tips pulled by steel control wires that were given leverage by a tubular pylon under the fuselage. The ingenious main wheel suspension was mounted on a stocky wooden frame below the engine, the tubular steel axle bar attached to two sliding tubular sleeves that ‘telescoped’ into corresponding tubes, substantial rubber bungees stretched between them to take the impact. Strong spoked wheels freely swiveled (like supermarket trolleys) to cope with landings. The rudder and elevators were logically placed at the tail, which was found to produce much greater control than on other contemporary aircraft. This arrangement remains current today. Tail elevators were not flaps in the conventional style, but were at the tips, tilting around the tailplane spar. The pilot sat in a snug wooden bucket seat. The monoplane was about half the weight of most contemporary designs. In this machine, Blériot was about to make the world’s first sea crossing between countries by aeroplane, flying from a beach to the west of Calais, France, to the hilltop above Dover Castle, Kent, UK. 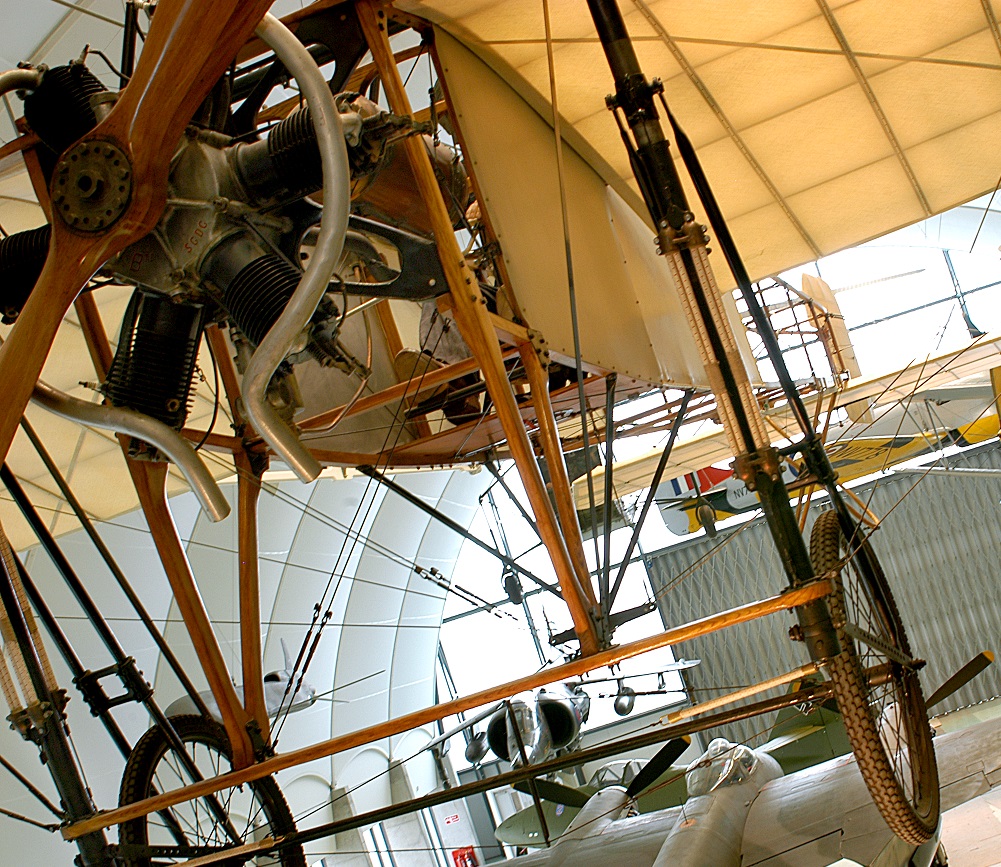 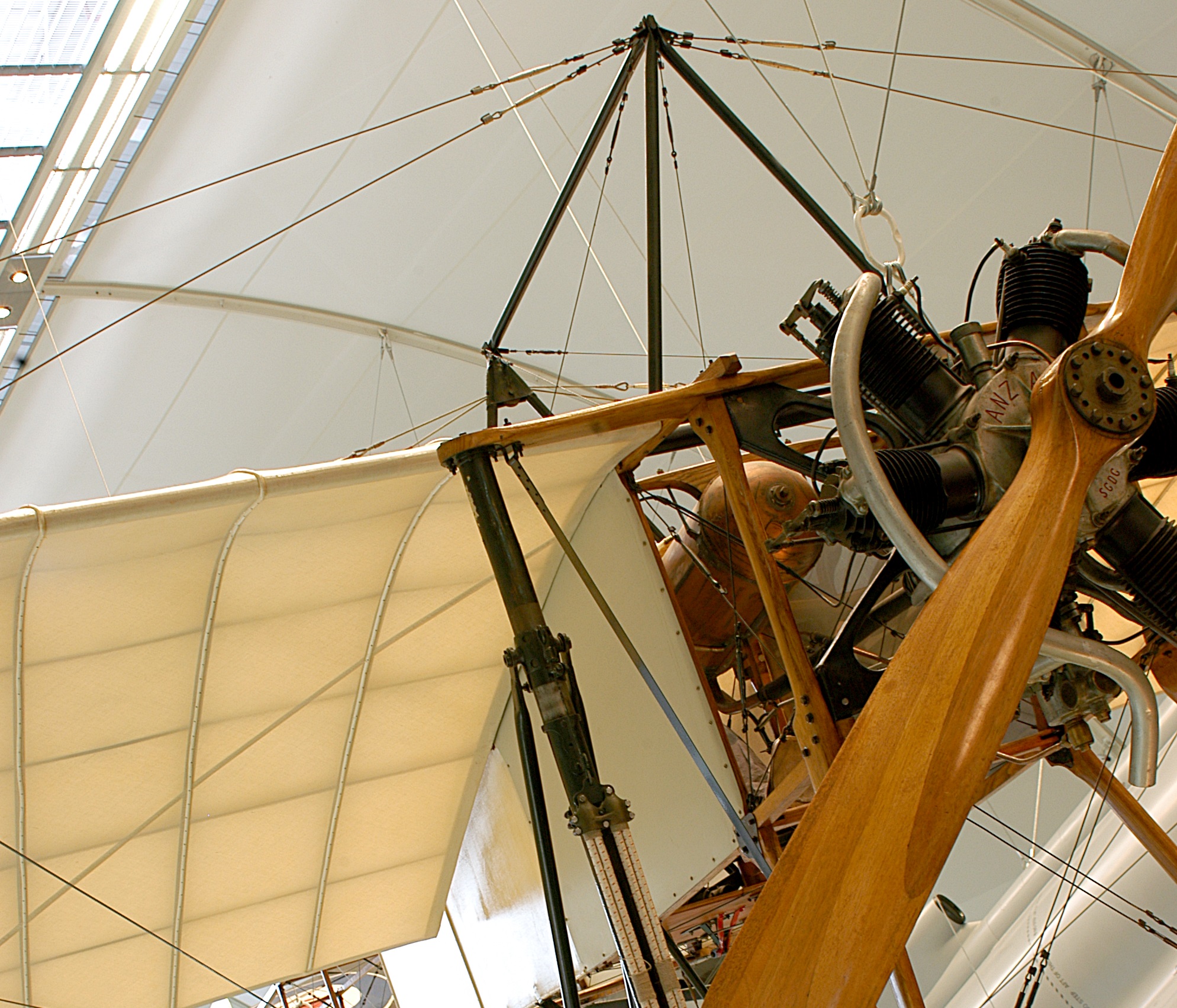 The great preoccupation of Lord Northcliffe, millionaire proprietor of the Daily Mail newspaper, was in advancing the progress of aviation and particularly the aeroplane. He had offered a series of cash prizes to any pioneer pilot who could achieve record ‘firsts’ one of which was the first non-stop Channel crossing by aeroplane. This attracted a cash prize of £1,000 (about £120,000 today) to anyone who dared. Rival aviator, Parisian Hubert Latham had first attempted the crossing on 19 July in his Antoinette, but engine failure forced him to land onto the sea – the first time a sea landing had been made by aeroplane. 25 July saw the two rivals camped out on the Northern French coastline bracing for further attempts – but it was Blériot who was to try at dawn, 4.41 am, on this day.

Being waved off by a large French crowd (even at that early hour), he started his flight just after sunrise (a condition of the record attempt). He was self admittedly poor at navigation and therefore flew without a compass. Overtaking a ship he had initially been following and reaching a point between the two coastlines, the visibility deteriorated:

‘For about ten minutes I was on my own, isolated, lost in the middle of the foaming sea, seeing no point on the horizon, perceiving no boat…Also my eyes were fixed…on the level of fuel consumption. These ten minutes seemed long and, truly, I was happy to glimpse…the English coast…I headed for this white mountain, but was caught in the wind and the mist…I could no longer see Dover…I could see three boats…They seemed to be heading to a port…I followed them calmly…the wind…got even stronger. A break in the coast appeared to my right, just before Dover Castle. I was madly happy…I rushed for it. I was above ground.’

He circled twice and when satisfied, dropped onto the downward slope of Northfall Meadow, breaking his undercarriage and coming to a rest in view of the castle at 5.12 am, propeller and wheels snapped. It was not long before a crowd of local people were to join him at the landing site, close-marshalled by police. The epic had been achieved. He had taken just over 30 minutes to cover the 24-mile distance.

Hours after his flight, he travelled to London and leaving Victoria Station with Lord Northcliffe beside him, he was cheered by thousands of enthusiastic Londoners. On his return to Paris, Blériot was greeted by an excitable crowd of 100,000 of his countrymen. The Daily Mail said of the event, “Great Britain is no longer an island”, a fact that was celebrated and by some regarded with trepidation, as the air attacks of the future First World War would bear out. At the time pioneer Alan Cobham said of the historic flight that “Britain must seek another form of defence besides ships”. The achievement rescued Blériot’s fortunes: over the coming weeks he received orders for more than 100 Blériot XIs, the design ultimately being mass-produced. 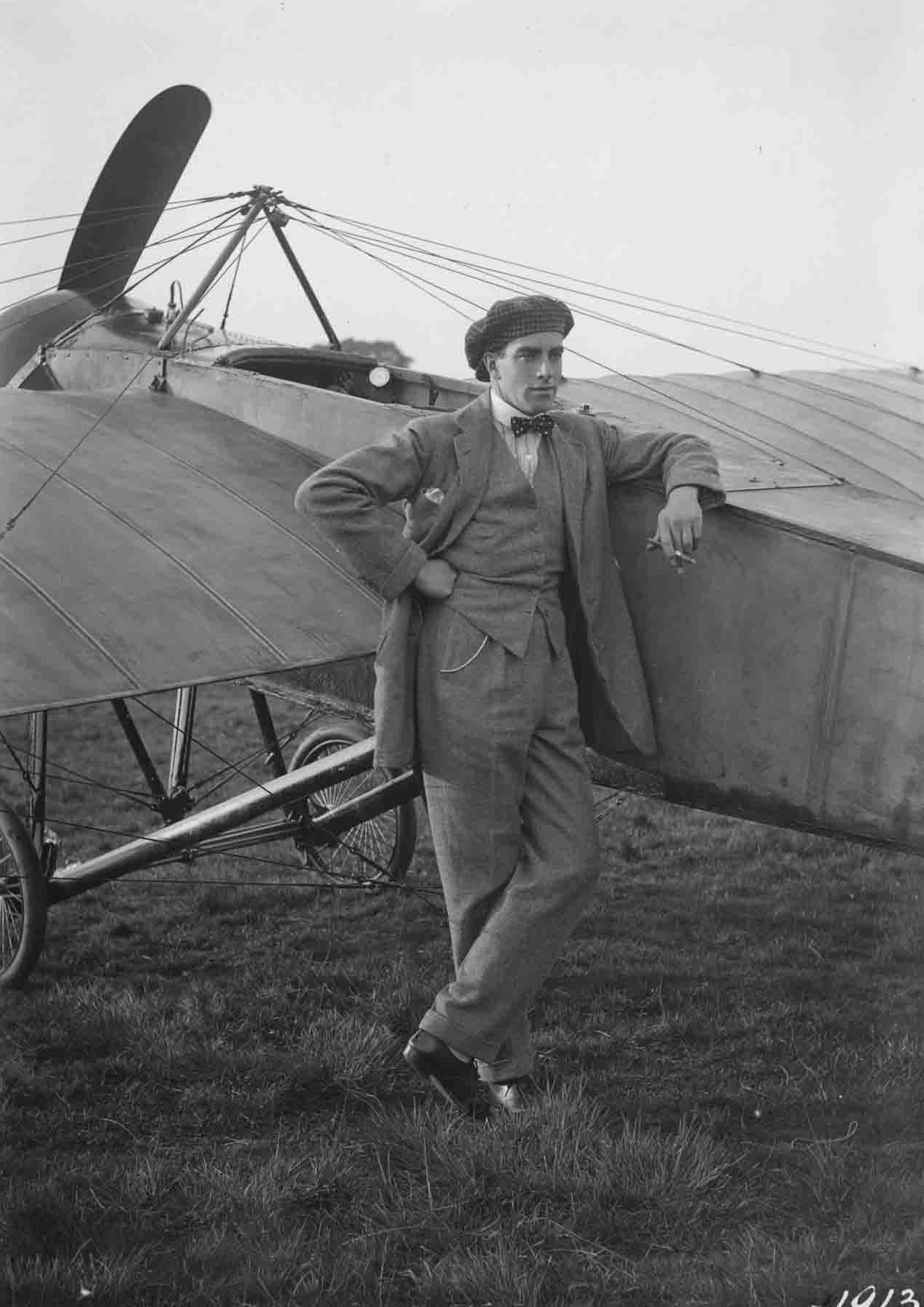 Blériot has a direct connection to the RAF Museum’s site. It was the channel crossing that inspired the founder of the London Aerodrome, later RAF Hendon, Claude Grahame-White to get into powered flight. Grahame-White befriended Blériot to gain admittance to the Rheims Aviation Meet a month later and learned to fly with the man himself in a two-seat Blériot design. Louis Blériot would take part in flying displays as a celebrity appearance in the years preceding the First World War.

You can explore the site where Blériot took off, now named Blériot Plage at Les Baraques, Calais. A water tower decorated with murals depicting the event, now stands close to the location of the starting point. Meanwhile, above the cliffs of Dover, in view of Dover Castle, a granite pad, unveiled in 1910, has the same dimensions and shape of the monoplane and marks the exact spot where Blériot’s plane came to rest down the slope on the chalk down. Certainly, worthy of a visit.

So as you head out, seat-belted into your passenger airliner, to make your oversea crossing to another continent, think again about the first time this was done by the remarkable Louis Blériot and his clever ‘modern’ design. 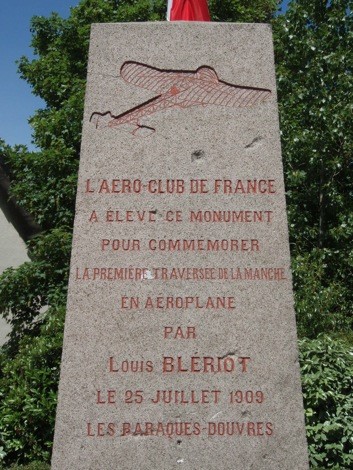 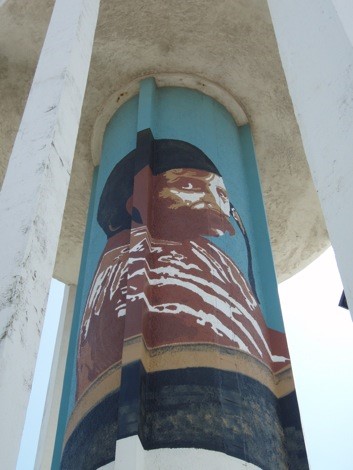 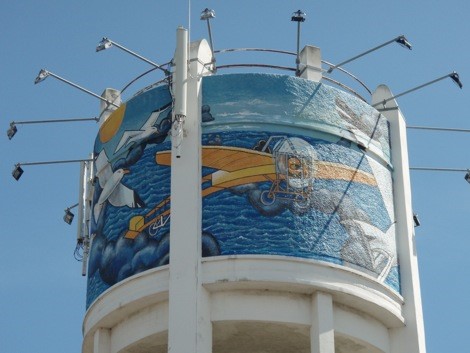 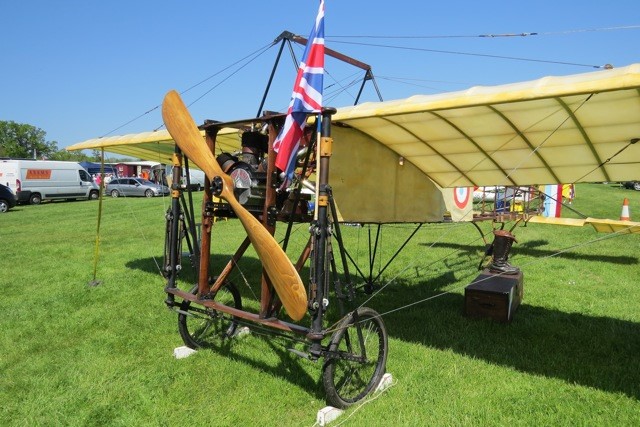 Vernon Creek is an Access and Learning Officer at the RAF Museum London. He manages the Handling Collection for both internal and external loans, assists with a range of enquiries around the Museum and is the History lead for the team.