Love is in the air – a blog for Valentine’s Day

At Montrose Air Station Heritage Centre, a particularly poignant object on display is a framed photograph of a young woman. While giving guided tours there, I would tell visitors about the owner of this romantic keepsake, Irish aviator Lieutenant Desmond Arthur. The young woman in the photograph is Winsome Lt Ropner, Arthur’s sweetheart. He took the photograph with him on his training flights. On 27 May 1913, his Royal Aircraft Factory BE2 No. 205 crashed, cracking the glass and killing Lt Arthur. 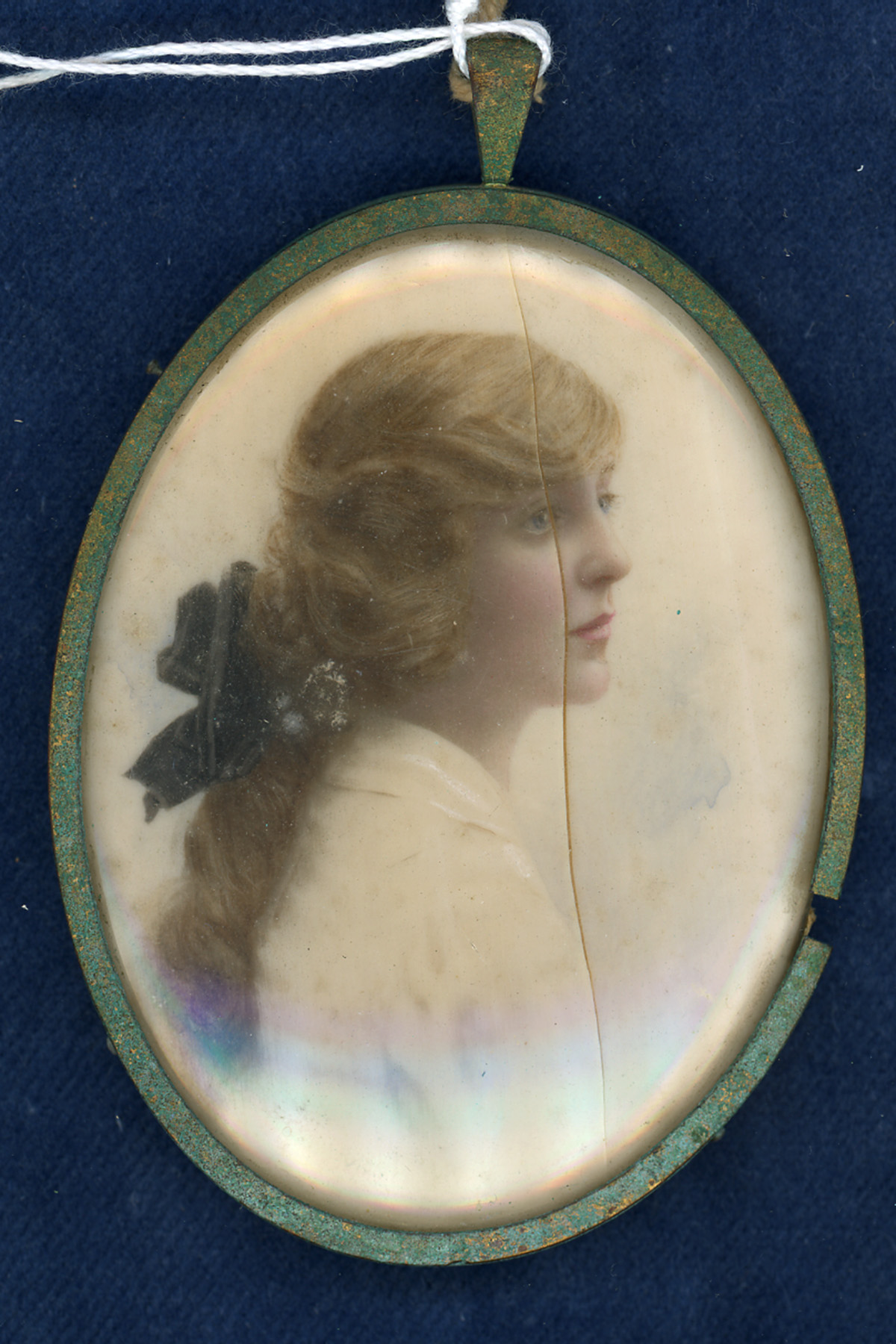 For hundreds of years, exchanging letters and mementos has kept military personnel serving overseas connected with loved ones at home. A fashion for ‘sweetheart jewellery’ emerged in the late nineteenth century. Some pieces were specially made by jewellers while many thousands were mass-produced in factories. Others were handcrafted by the men themselves. For the women at home, they were a tacit show of support and romantic devotion. Their material value is not high but these are emotive objects which tell powerful stories. To mark Valentine’s Day, I will look at some of the tokens of love in the RAF Museum collection. 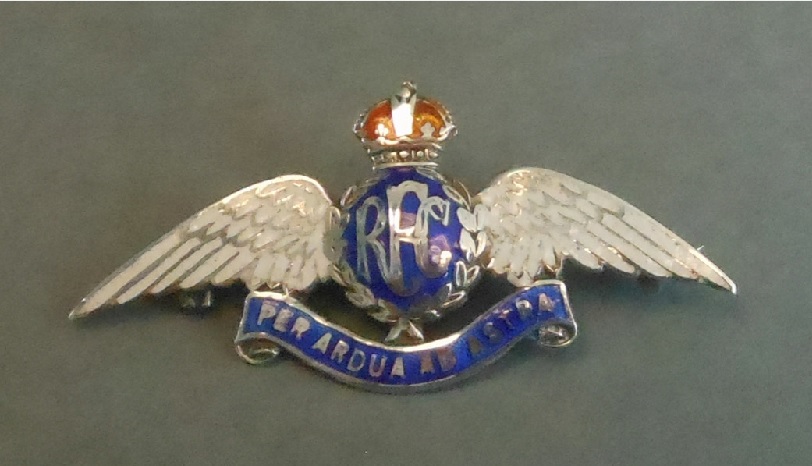 Above is a sweetheart brooch gifted by Lt Leonard Herbert Phillips to his sweetheart Florence Murray. In a letter from Len to Floss on 12 June 1917, he asked her to accept ‘this small present’, thought to be the sweetheart brooch. Len survived the war and the couple were married in 1924. 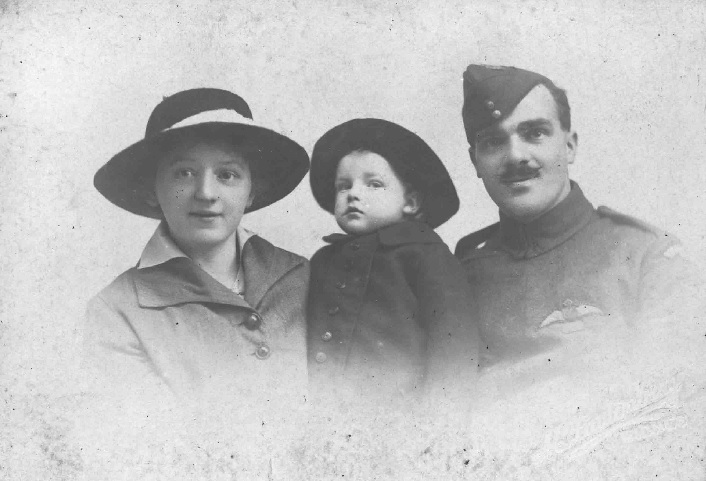 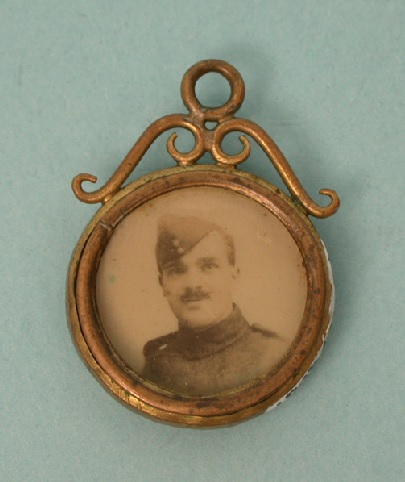 This locket is associated with courageous First World War aviator Sergeant Thomas ‘Tom’ Mottershead VC. It was presented to his wife and childhood sweetheart, Lilian Bree, whom he married in 1914.

From Widnes in Lancashire, Tom was awarded the Victoria Cross for a final act of bravery which saved another man. He originally enlisted with the Royal Flying Corps as an Air Mechanic but nurtured an ambition to become a pilot. Tom trained at the Central Flying School at Upavon and went on to fly FE2 fighters over the Western Front. On 7 January 1917, he was on a routine patrol over Ploegsteert Wood with his observer, Lt WE Gower, when their FE2d A39 encountered a group of Albatros fighters. Hit by enemy fire, the fuel tank immediately exploded in flames. With his clothing alight, Tom resisted the urge to crash. Pieces of fabric and wood fell off until it nose-dived into the ground. His observer was thrown clear, saving his life. Tom suffered severe burns and died on 12 January 1917. He was the only non-commissioned officer of the aerial forces to receive the Victoria Cross. 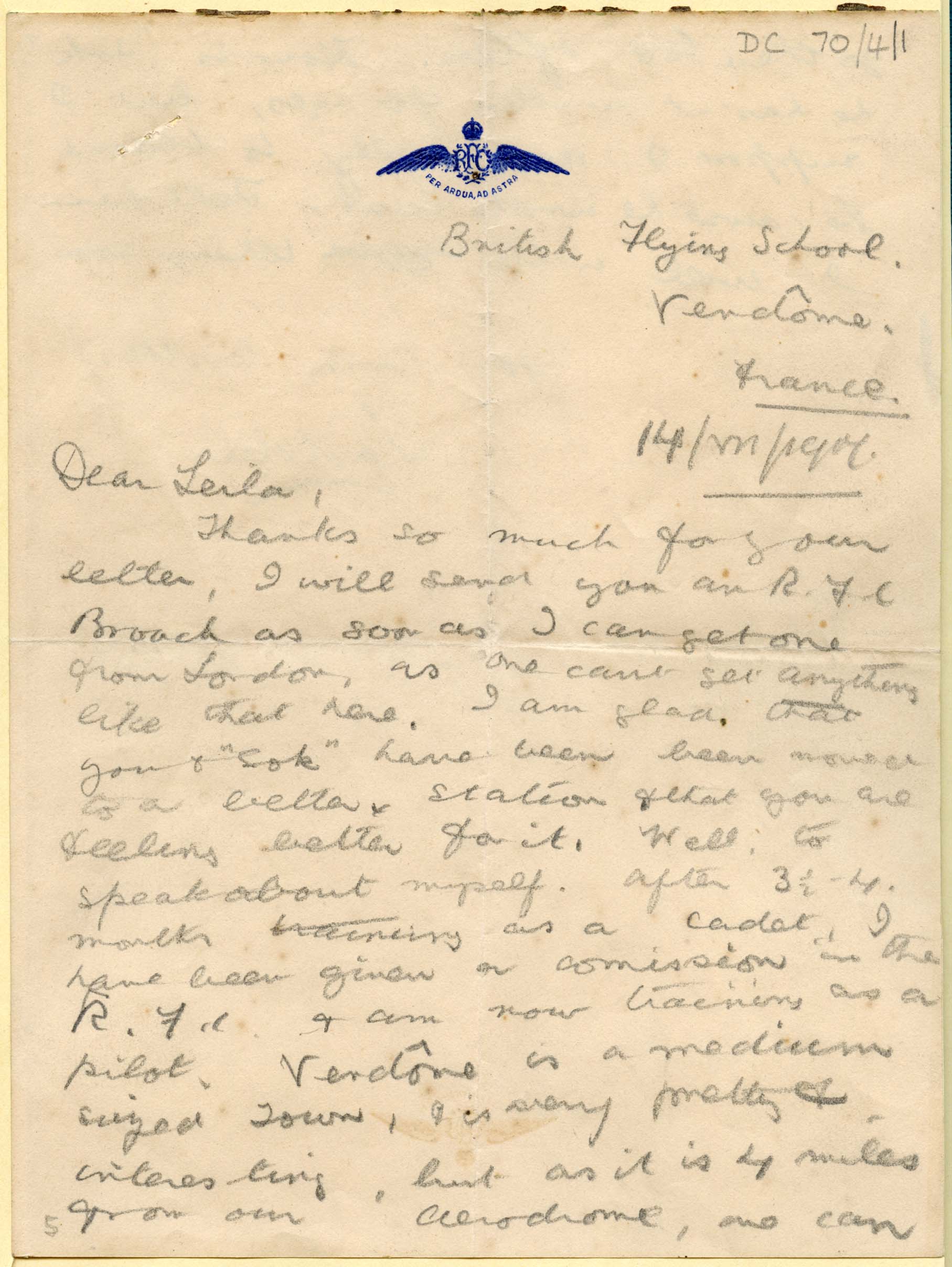 Sweetheart brooches were not only gifted to wives and sweethearts. They were also presented to other significant women in a serviceman’s life, a fact highlighting how young they often were. The then 19-year-old Indian aviator Lt Indra Lal ‘Laddie’ Roy sent an affectionate letter to his sister from the British Flying School at Vendôme, France. In the letter dated 14 July 1917, he promised her a sweetheart brooch and wrote enthusiastically about his training.

The RAF Museum Archive contains transcripts of letters from Gertrude Richardson to her son, Lt Robert Harold Richardson, a Royal Flying Corps observer with No. 6 Squadron. Awaiting news, she wrote on 22 February 1918 “Gilbert has given me a lovely brooch – an Observers wing in diamonds. Thank you very much Harold dear for your kind thought. With best love oh if only I could see you”. Sadly, Harold had been killed on active service in November 1917. The sweetheart brooch became a last tangible reminder of his presence. It remains with the family. 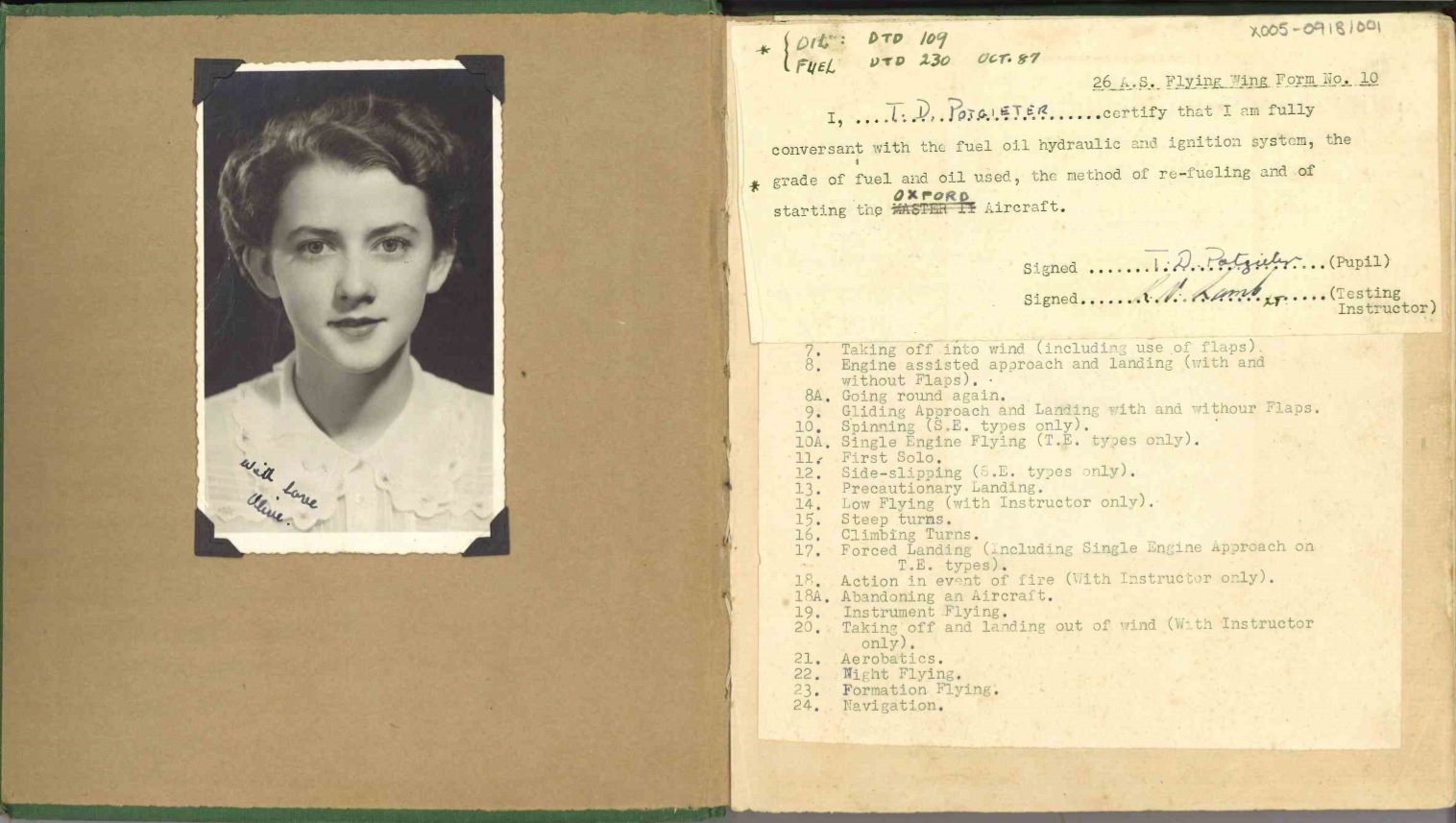 Many other tokens of affection were carried by the airmen themselves. Captain Theodorus Daniel Potgeiter, a South African Air Force pilot, kept a photograph of his sweetheart Olive inside his log book.

Another poignant document is the final missive from WO Charles Walter ‘Wallie’ Gentry to his ‘darling wife’ Phyllis telling her how much he loves her. The letter begins ‘Should you read this before hostilities cease, it will be because I had no chance to say goodbye to you in person’. He reflects on the difficulties of being apart during wartime but feels it is a sacrifice he must make:

‘You brought into my life something worth living for, and, if necessary dying for – love for a woman, the sweetest of all…However, we must remember that if the cost of freedom is high for many of us…that price must be paid for the benefit of the children of this world, that they might not know the anguish and suffering of war for years to come.’

Wallie flew Supermarine Spitfires with No. 155 Squadron in the Far East and went missing on 5 November 1944. This final letter was kept by his unit and sent to Phyllis when his death was confirmed almost two years later. 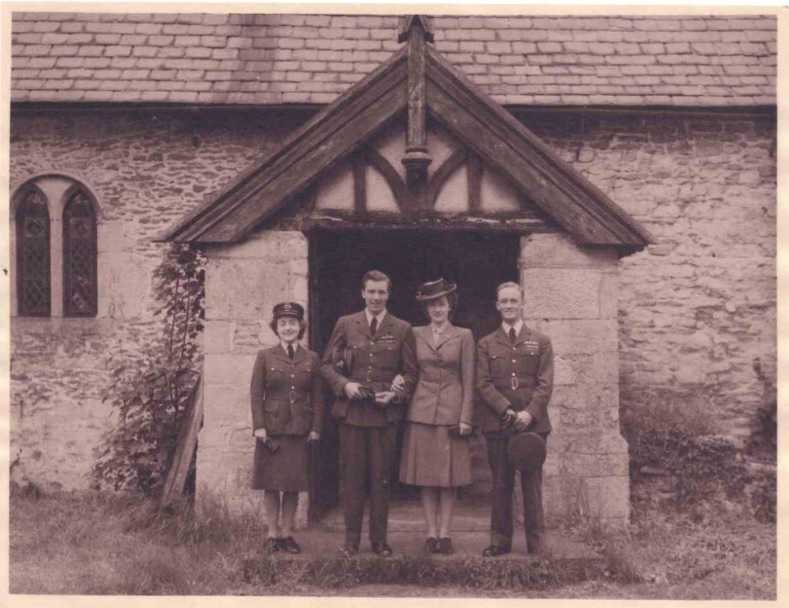 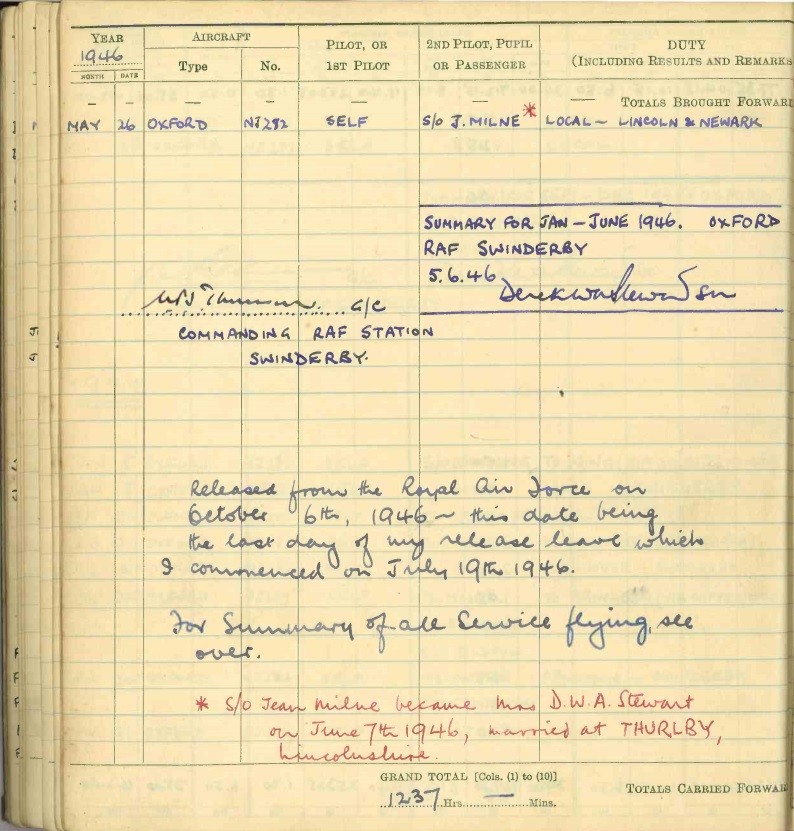 Squadron Leader Derek William Arthur Stewart DFC gifted a sweetheart brooch to WAAF Section Officer Jean Mackie Milne. They met at RAF Swinderby, where Jean worked with No. 5 Group. By this time, Derek had survived two perilous tours of operations. In Bomber Command, 51% of men were killed on operations during the Second World War. His crew’s missions with No. 90 Squadron included secret arms drops to the French resistance. With No. 514 Squadron, the crew flew bombing missions in the lead up to D-Day, followed by longer night raids into France and Germany. One day, Derek flew Jean back with him for a special occasion. The couple were wed on 7 June 1946 at Thurlby in Lincolnshire. He recorded the flight and their wedding day in his log book. Derek and Jean were happily married until his death in 1977. 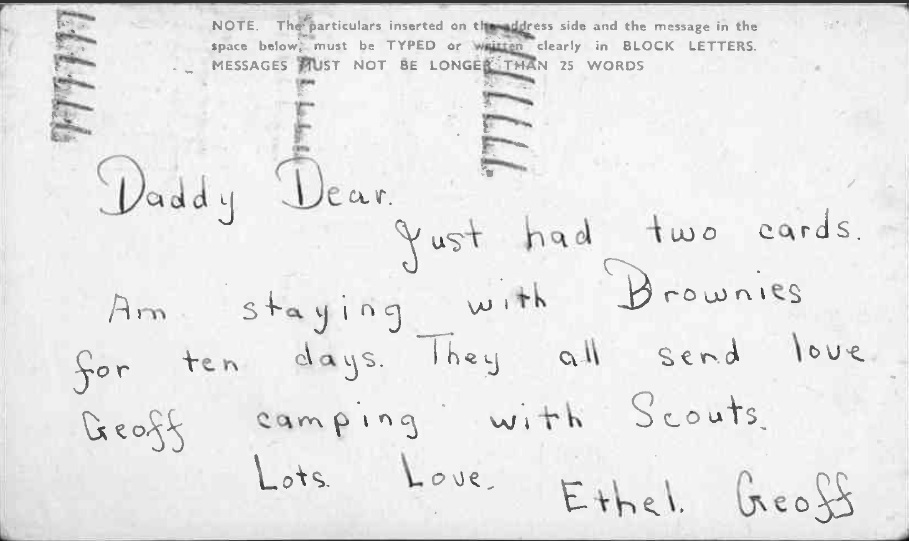 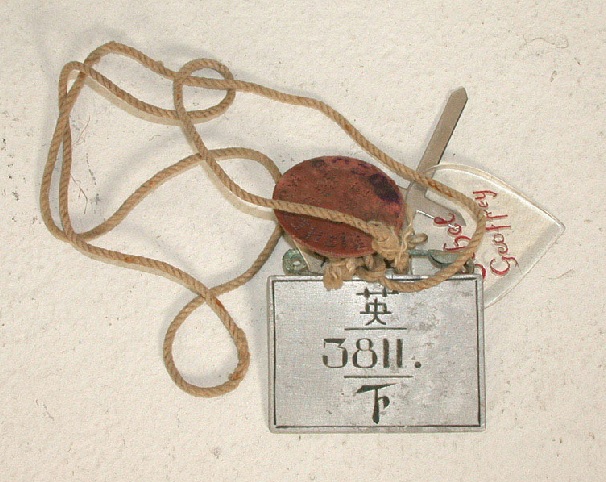 Birmingham-born Aircrafthand LAC Thomas Walter Fisher of No. 605 (County of Warwick) Squadron carried his own piece of sweetheart jewellery. It was a handmade heart crafted from Perspex, a material used for aircraft canopies. It’s easy to imagine Walter making the heart during quieter periods on the ground. On it he painted the names of his children, Ethel and Geoffrey. When serving with the RAF in the Far East, he was reported missing and became a prisoner-of-war of the Japanese. His personal archive, held by the RAF Museum, details his period in captivity, malnourished and enduring terrible living conditions. From a prison in Java, he wrote:

‘To this noble band of
Martyrs in England
One day will arrive
Clad in Bits and Rags,
And tatters
Full of thanks to have survived’

Eventually, Walter was liberated after 3 and a half years as a prisoner-of-war and could return to his family. 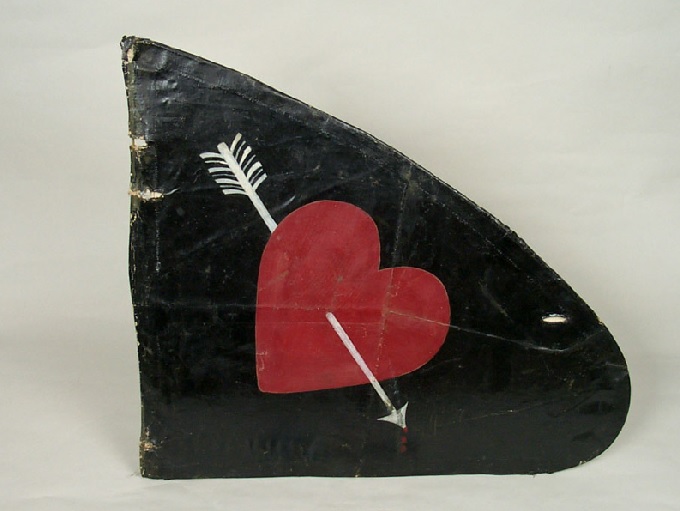 On display in our ‘First World War in the Air’ exhibition in Hangar 2 is another token of love and friendship. This is a piece of the tailfin fabric from Sopwith Camel B6316 flown by Lieutenant Colonel William George ‘Billy’ Barker VC DSO MC, and shows his personal insignia. The day he left, the Canadian fighter ace is said to have removed the fin fabric with a knife and handed one side each to his mechanics, saying ‘Little Souvenir, fellas. Thanks for everything’.