Oh Lord won’t you buy me a Mercedes Benz

Until recently visitors to the War in the Air hangar at Cosford sometimes must have wondered why there was on display a Mercedes-Benz G-Wagen four wheel drive utility vehicle, painted in an unmilitary-looking glossy black with a red stripe. This vehicle had actually been used by 18 Squadron RAF as a hire car for squadron staff during their service in West Germany in the 1980s and 1990s. Now moved into storage, how 18 Squadron came to have it was partly the reason for its preservation. 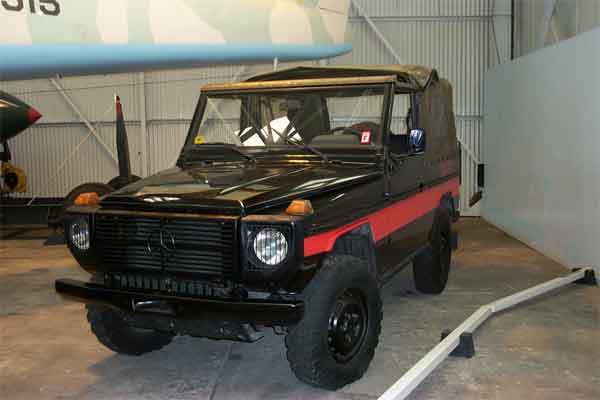 18 Squadron were the first RAF squadron to operate the Boeing C-47 Chinook, converting onto it in July 1981 when based at Odiham in Hampshire. With the beginning of the conflict in the Falkland Islands in April 1982, four of the Squadron’s Chinooks and associated personnel were embarked on the cargo ship the Atlantic Conveyor and transported to the South Atlantic area of operations.

On 25 May 1982 while with the Naval Task Force in San Carlos Water off East Falkland the Atlantic Conveyor was hit by two Exocet missiles fired from Argentine Air Force Super Etendard aircraft. A huge fire was started which resulted in the deaths of 12 personnel on board and the loss of all of the cargo, including three of 18 Squadron’s four Chinooks. Atlantic Conveyor sank three days later.

Whilst there, the Squadron commanders were given the use of a captured Argentine G-Wagen, surrendered as spoils of war to the Brigade of Gurkhas. This vehicle had been damaged by cannon fire from a British Harrier aircraft, and had sustained a hole in its bonnet and inner wing from a cannon shell. Despite this it proved serviceable and the OC of 18 Squadron Wing Commander Stables arranged for it to be brought back to the UK when operations in the Falklands ceased.

First registered in December 1981, the G-Wagen was part of a large consignment ordered from Mercedes-Benz and delivered to the Argentine military. Its original colour scheme was a tan and olive camouflage, which is illustrated in this photograph of it in the mid-1980s. Just visible is the 18 Squadron Pegasus emblem which was added to the passenger door. 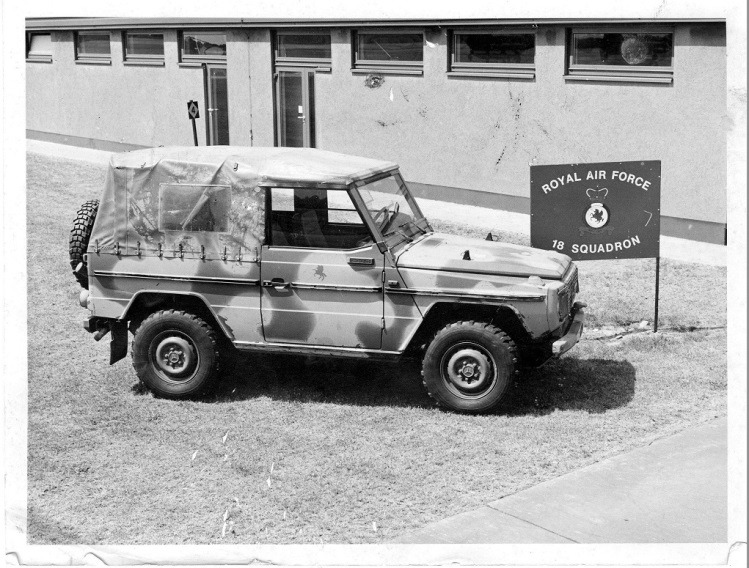 18 Squadron took the G-Wagen with them when posted to RAF Gutersloh in West Germany in 1983 and it was registered as a British Forces Germany vehicle. It came into its own as a Squadron hack and hire vehicle, with personnel taking it as far afield as Denmark, Lichtenstein and Yugoslavia. Its hire sheet even records a detail in 1990 of “Op Granby” and an increase in mileage of 1500km, but whether it was taken to 18 Squadron’s theatre of operations in the Gulf is not yet known.
Alongside 18 Squadron at Gutersloh was the Puma helicopter equipped 230 Squadron, whose squadron crest features a tiger, in recognition of the Squadron’s service in Malaya. A friendly rivalry existed between the two squadrons and after two large porcelain tigers went missing from the 230 Squadron crew room, the G-Wagen was kidnapped for a week and returned to 18 Squadron with an orange and black stripe colour scheme. Funds were found for it to be painted in colours more befitting 18 Squadron, and hence the black and red 18 Squadron colour scheme it remains in today.

The original Argentine colours can still be seen on the rear number plate holder, alongside the 18 Squadron Pegasus. 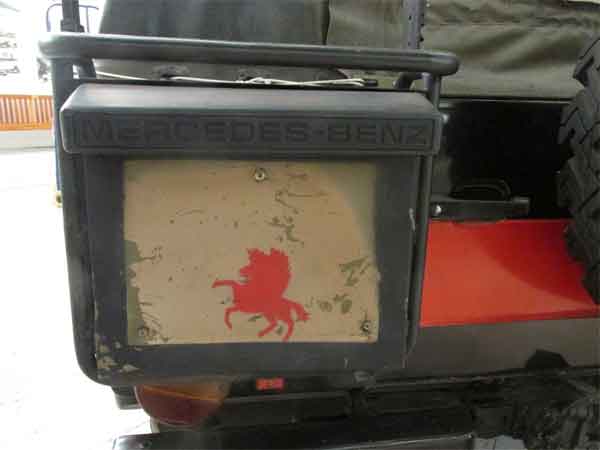 In 1993, after ten years of service, the G-Wagen was starting to wear out and a request to a main dealer for a gearbox part required the sharing of its chassis number. It was at this point it was discovered that the Argentine military had never completed payment for the vehicle back in 1981 and Mercedes demanded the return of their stolen property. 18 Squadron personnel politely pointed out that as a “spoil of war” the G-Wagen was not being given up, and the part was obtained from an alternative source!

After 18 Squadron were posted back to the UK in June 1997 the G-Wagen could not be UK registered due to its lack of importation documents, and the decision was taken to retire it from service. Air Marshal Sir John Curtiss, Commander of the Air element during the Falklands Conflict, helped in the vehicle’s recovery back to the UK from the Falklands on the basis that it would eventually be transferred to the RAF Museum. On 14th June 2001 it duly arrived at Cosford in an 18 Squadron Chinook and was rolled out for its official handover to the Museum from OC 18 Squadron Wing Commander David Prowse. 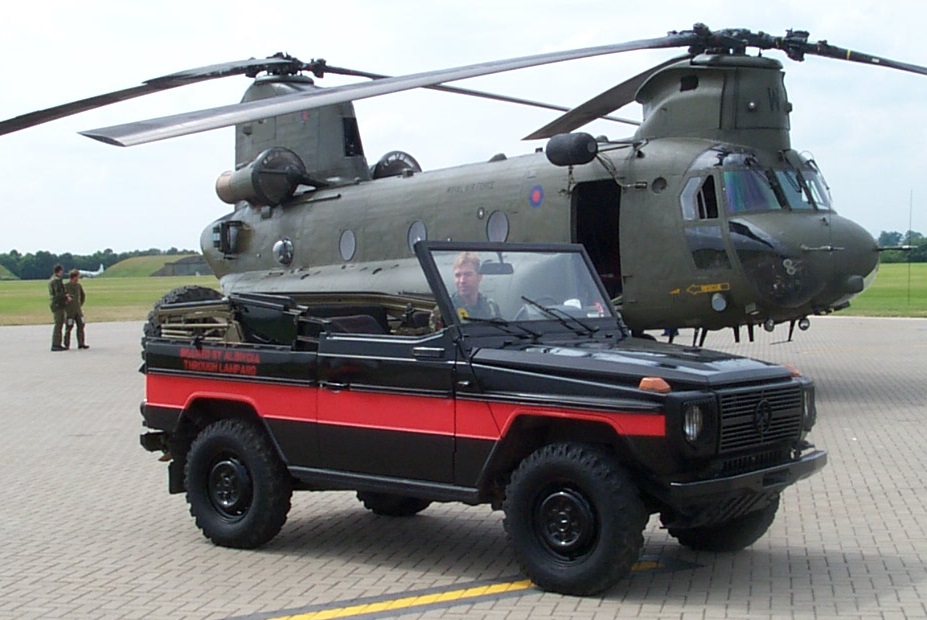 Routine conservation work by Museum staff in 2003 led to a variety of items being removed from underneath the rear seat. These included some empty Embassy cigarette packets and a disposable lighter, two Argentine Ever Ready batteries, a German beer bottle top and a diamante earring! Also found were the burnt remains of this Argentine “Jockey Club” cigarette wrapper. 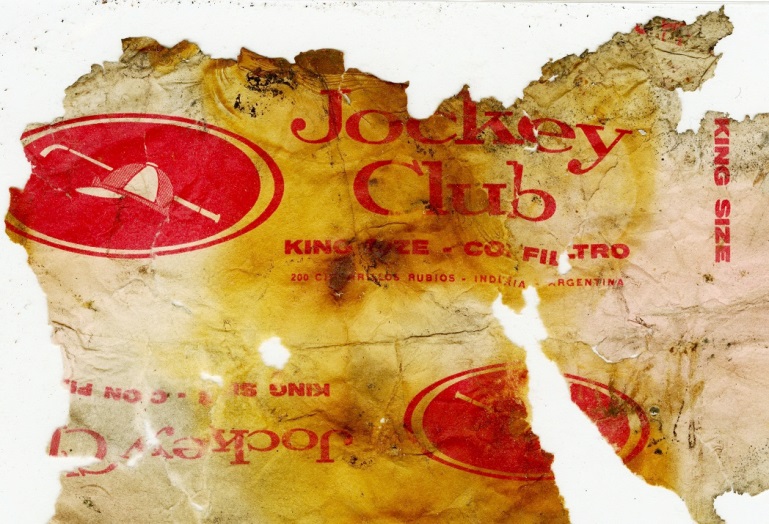 The damage to the bonnet caused by the Harrier’s 30mm cannon shell was repaired by 18 Squadron when the G-Wagen first arrived in Gutersloh in 1983. The exit hole in the inner wing still remains, however, and will be kept as evidence of the battle damage sustained during the vehicle’s service life. 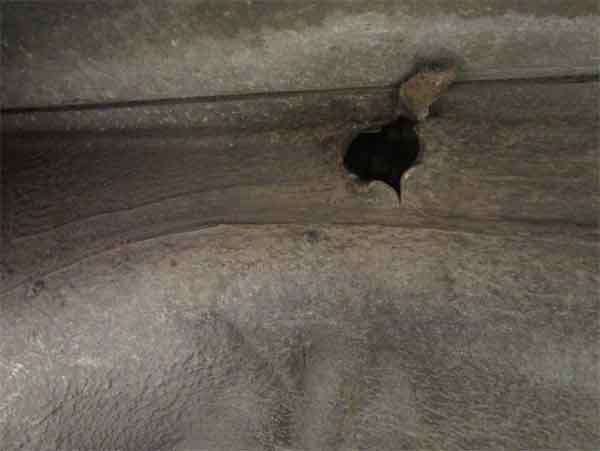