On My Honour: Scouts and Guides in the RAF

Today is World Thinking or Founders Day. On 22 February each year, millions of Girl Guides and Scouts worldwide gather in the spirit of international friendship. It’s an opportunity to reflect on the movement’s history, celebrating its impact and enduring values. Girl Guides and Boy Scouts served with distinction in the Royal Air Force and in wartime civilian duties; showing resourcefulness, courage and self-sacrifice.

What does it mean to be a Scout or a Girl Guide? It was British Army officer Robert Baden-Powell (known as ‘B.P’) who organised the Scouting Movement in 1908. He introduced the motto ‘Be Prepared’, the Scout laws and a patrol structure. Badges and activities outdoors were designed to develop teamwork, leadership, honour and an attitude towards public service. After girls proudly announced their presence at the 1909 Crystal Palace Rally, Girl Guides were officially established along the same lines in 1910. 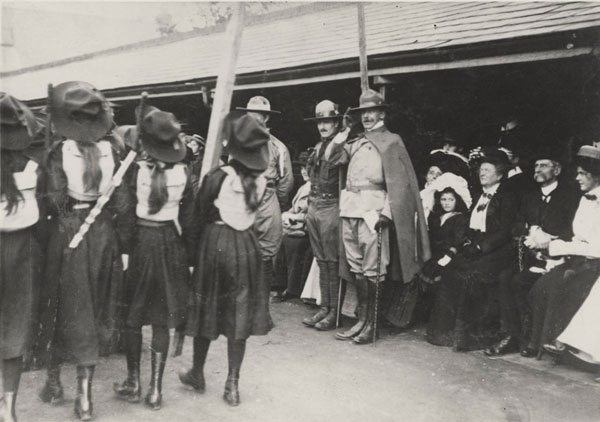 Scouting and aviation have been closely linked since its early days. With the aid of brother Baden, B.P. developed the first Scout Airman’s Badge less than 10 years after the Wright Brothers made the first powered flight in 1903.

In 1893 Baden began early experiments with kites. Kites capable of flying at higher altitudes and carrying a man could be used for aerial reconnaissance without the limitations of balloons. In 1894, his kite was the first to lift a man to the height of 10ft; and the following year he patented his six-sided ‘Levitor’ design. The work no doubt influenced Samuel F. Cody’s design adopted by the Royal Flying Corps. As Scouting H.Q. Commissioner for Aviation, Baden advised on the creation of the Air Scout branch in the 1930s. 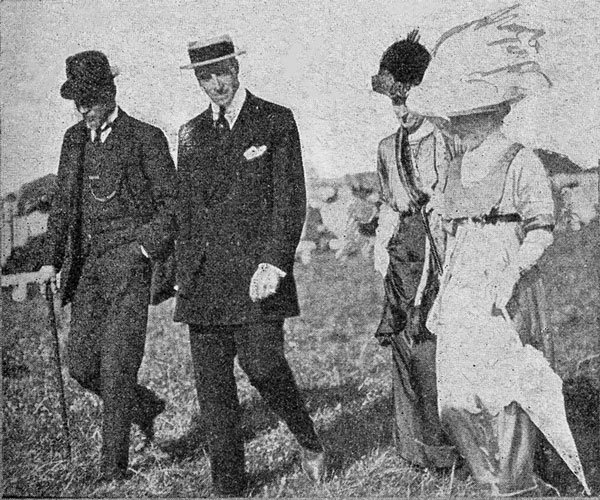 B.P.’s sister Agnes became the first President of the Girl Guide Association in 1912. She helped construct Baden’s aircraft and flew in some of his experimental flights. In 1909 Agnes was a founding member of the short-lived Women’s Aerial League, formed under the auspices of the Aerial League of the British Empire. Its members incorporated the Young Aerial League branch with the aim of increasing ‘airmindedness’ in boys and girls. Courses in aircraft identification and observation took place at Hendon Aerodrome supported by Claude Grahame-White’s Flying School. Boy Scouts and Girl Guides attended flying displays at Hendon. 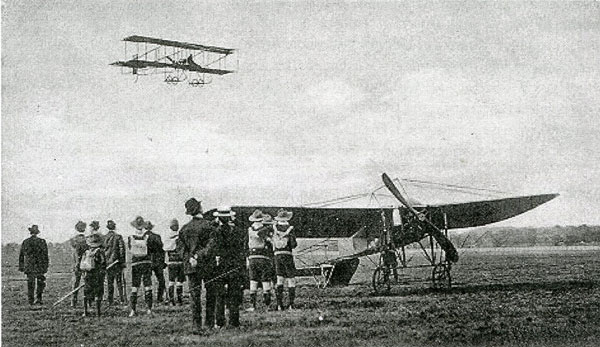 During the First World War, many former Scouts served bravely with the flying services. Among them was Observer Ace Sgt William James Middleton, an Assistant Scoutmaster with the 2nd Epping Forest Troop. He achieved nine aerial victories with No. 205 Squadron. From August 1918, the squadron was flying dangerous low-level bombing operations on the Somme. In one attack Middleton achieved six direct hits despite intense anti-aircraft fire. For this and an attack on Brie Bridge, Sgt. Middleton was awarded the Distinguished Flying Medal (DFM). The DFM citation commended his ‘conspicuous gallantry and skill in bombing enemy lines of communications, dumps and aerodromes.’ He died on 4 October 1918 from wounds received in aerial combat. It was said that he had ‘died like a Scout, fighting and smiling’. 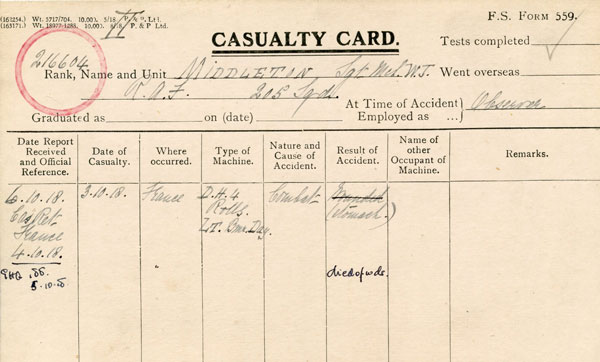 In 1920 Dame Helen Gwynne-Vaughan, Commandant of the Women’s Royal Air Force in 1918-1919, joined the Girl Guide Executive Committee. She wrote in her memoir: 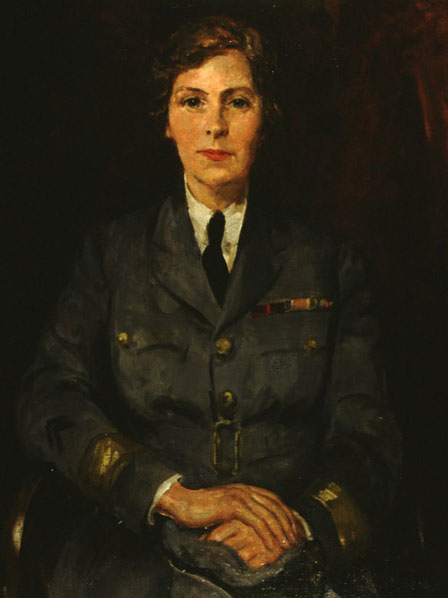 “I was greatly impressed by the splendid system of training and voluntary discipline which the Guides provided and by the courage and resource displayed in emergency, sometimes by quite small children by whom it had been assimilated…I recognised that the qualities inculcated would also be of value in war”.

When Director of the Auxiliary Territorial Service from 1938-1941, she observed qualities of ‘cooperation’ and ‘forbearance’ in former Girl Guides which made them excellent candidates for officers. 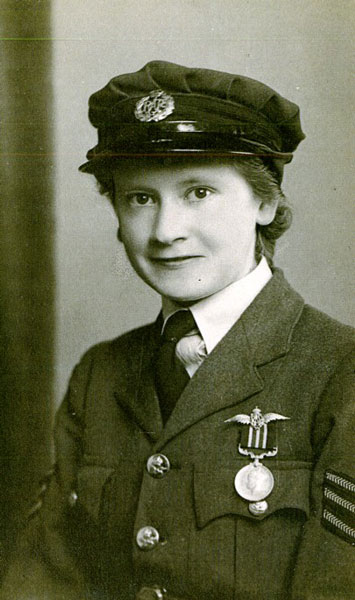 A former Girl Guide Acting Corporal Avis Joan Hearn, joined the Auxiliary Territorial Service in 1939. She was selected for the Women’s Auxiliary Air Force as a Radio Operator based at RAF Poling. On 18 August 1940, she received news of an imminent attack. Hearn remained at her post to receive vital messages. As the Receiver Block neared collapse, 87 bombs fell around her. For her brave actions and devotion to duty, she received the Military Medal. Avis Joan Hearn’s medal bar and uniform jacket are on display at RAF Museum Cosford. 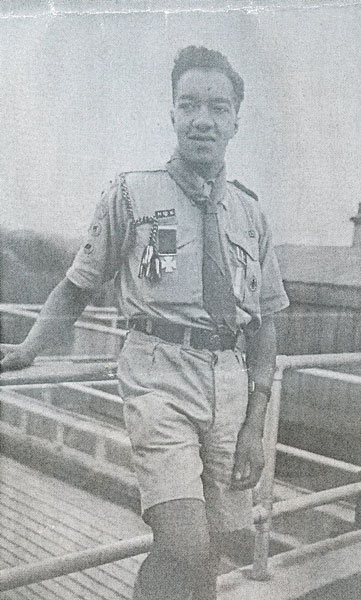 During the Blitz, Scouts and Girl Guides volunteered to help those in need. They performed First Aid, delivered messages and rescued people in Air Raids. Civil defence duties were performed at great risk to their lives: some died and many received awards for acts of gallantry. Scout Jack Olden, a Patrol Leader in the 8th Holborn (Lady Peats’ Own) Group received the Scout Silver Cross in May 1941 for duties performed with “great gallantry and resource and a total disregard for his own safety”. With Patrol Second Dennis Edwards, he put out fires caused by incendiary bombs during severe air raids on London. Olden began service with the RAF the following year, serving on Sunderland flying boats with No. 201 Squadron.

Girl Guides displayed their resourcefulness and cooperation in a secret project. In 1941, they were asked by the Air Ministry to collect empty cotton reels. The 15,000 reels containing rolled up silk maps of Europe, German currency and details of contacts were hidden in parcels sent to prisoner-of-war camps as aids to escape. 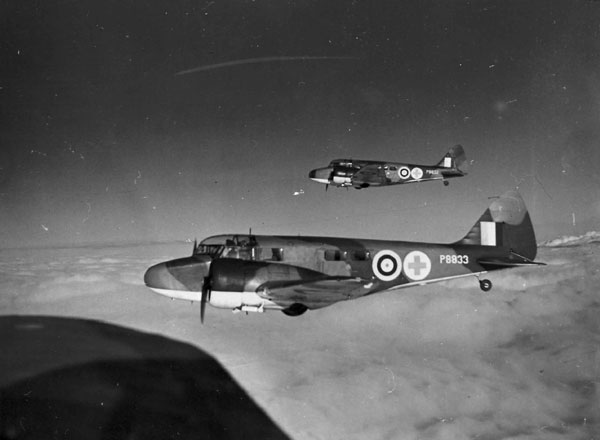 In 1940 Girl Guides from across the British Empire contributed to the Girl Guide Gift Fund. They raised over £46,000 in just a few months. A third of this money enabled the purchase of two Airspeed Oxford Mk 2 air ambulances: P8832 ‘Florence Nightingale’ and P8833 ‘Edith Cavell’. They were presented to the Royal Air Force on 21 July 1940 and were based with No. 24 Squadron at RAF Hendon.

Despite the turmoil of war, many young men in the services joined the movement as adult Rover Scouts. Perhaps the most well-known former Rover Scout is Wg Cdr Guy Gibson.

In Operation Chastise Gibson led the ‘Dambusters’ on a risky bombing mission targeting dams of crucial importance to the German war effort. His heroic status was affirmed by his Victoria Cross, the highest award for gallantry in the face of the enemy. Less than a month later the former boy scout decided to ‘re-muster’ as a Rover Scout in the 1st Tovil Scout Troop in Kent. Addressing the troop, he said: 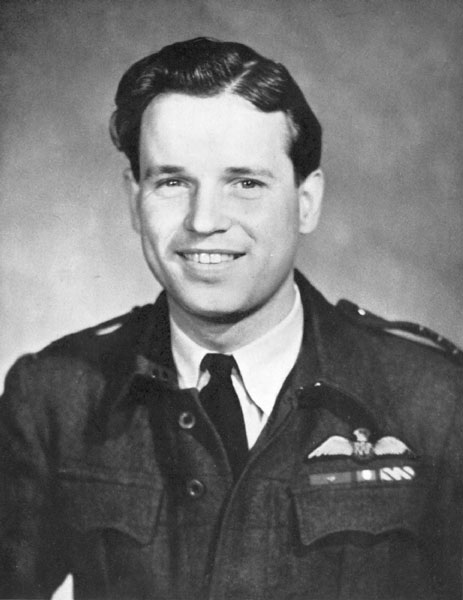 “I was a Scout a long time ago and I’m afraid the only thing I passed was my cooking test. But it did teach me, in the few weeks that I was a Scout, the decent things in life…You’re taught resourcefulness, courage, devotion to duty; in other words, you’re just being taught the things which will stand you in a good stead in the service”

He was killed on 19 September 1944 while flying a De Havilland Mosquito over Holland. By the time of his death, he had flown 177 operational sorties. Gibson’s troop recalled his cheerful character, leadership qualities and plans to continue Scouting after the war. Wg Cdr Guy Gibson’s medals are on display at RAF Museum London. 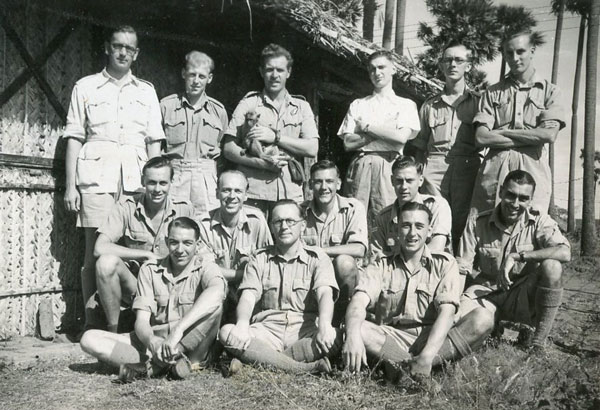 The RAF Museum Archive contains the fascinating log book of the 3rd Ceylon (Services) Rover Crew based at RAF Kankesanturai from 1945-1946. The pages include a list of members, photographs and meeting summaries. Further sections record district camps at Jaffna with Sri Lankan scouts. Some of the activities mentioned such as knot tying, badge work and Kim’s game will resonate with Guides and Scouts today. 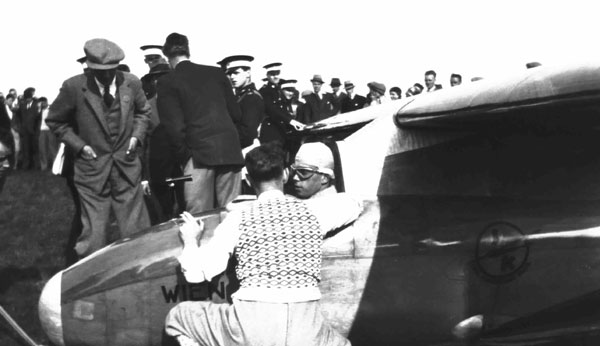 Another notable former boy scout was RAF test pilot Robert Kronfeld. Kronfeld earned celebrity status for his flying displays, distance and altitude records. He brought his glider ‘Wien’ (Vienna) to Britain in 1930 and flew it 50 miles from Itford to Portsmouth. In 1931, he became the first man to fly a glider across the English Channel.

He fled Nazi Germany for his Austrian homeland in 1933 and later took up British citizenship. In 1942 Kronfeld joined the Airborne Forces Experimental Establishment at RAF Sherburn-in-Elmet. There he tested aircraft designed to drop heavy equipment into battle and was a specialist in flying tailless gliders. He was awarded the Air Force Cross for his work in military glider development.

As the war came to an end, Kronfeld began testing aircraft for General Aircraft Ltd. His last test flight was a stalling trial of the GAL.56 TS507A at Lasham on 12 February 1948. Shortly after the aircraft was released from its tug, it went into a spin and crashed. The observer, Barry McGowan successfully baled out but Kronfeld was killed. The obituary in Flight read “we have lost not only one of the world’s outstanding glider pilots but a generous warm-hearted friend”.

Former Girl Guide Gp Capt Anne-Marie Houghton is a trailblazer in today’s Royal Air Force. After an initial commission as a Flight Controller she retrained in the Supply Branch and graduated in 1991 as the Royal Air Force’s first female Navigator. She has flown in operations all over the world – in Afghanistan, Libya, the Balkans, the Middle East and Far East. She made Group Captain in October 2017. 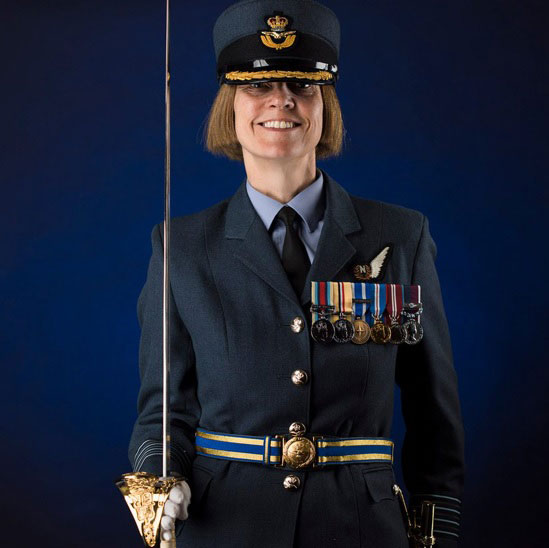 The Scout Association launched its Air Activities Badge in 2011, 100 years since the very first Airman’s Badge was produced. Last year Girlguiding UK introduced the Brownie Aviation Badge. Who knows what heights the next generation of Girl Guides and Scouts will reach? As Major Tim Peake said, “Scouting was the first step on a journey that led me to becoming an astronaut”.