Personal Stories from our new exhibitions

The RAF museum has an incredible collection of nearly 2 millions objects reflecting the history of the RAF ranging from a small can of webbing paste to two gigantic Avro Vulcans.

We are very proud of our collection; however, we perfectly understand that the RAF is not just its objects but its people – the people who make the RAF’s achievements possible. Their personal stories are the true history of the RAF and these stories provide the real basis for our exhibitions.

In this blog I would like to reveal four stories about remarkable women, whose lives are strongly connected to the RAF and who are represented in our ‘RAF Stories: The First 100 Years 1918-2018’ exhibition.

Our first story is about Noor Inayat Khan, a beautiful young woman born into the family of a Sufi Muslim teacher and raised both in London and Paris. Noor was a gentle and sensitive lady, she was a pacifist and wrote children stories. But with the outbreak of the Second World War Noor couldn’t stay un-involved. In 1940, after the German invasion to France, she escaped to London and joined the Women’s Auxiliary Air Force. In 1942, she was recruited as a secret agent and in 1943 became the first woman radio operator dropped behind the enemy lines where she operated assisting the Parisian Resistance.

The average life expectancy of the radio operator at that time was 6 weeks. Noor managed to last three months carrying out her crucial work. Even when her circuit collapsed, and London ordered her to return, she refused to leave her French comrades. Noor continued to work demonstrating incredible heroism while remaining a vital intelligence link between London and Paris.

On 13 October 1943 Noor was betrayed, captured, interrogated and tortured. Despite the torture she refused to provide any information, not even her real name, and made two attempts to escape. As a result she was kept in chains in solitary confinement, but her spirit couldn’t be broken. She was shot on 13 September 1944 at Dachau concentration camp. Her last word was ‘Liberté’.

On 5 April 1949 she became the first Muslim woman awarded with the George Cross posthumously for her ‘most conspicuous courage, both moral and physical over a period of more than 12 months’.

The Museum is proud to tell Noor’s story in our ‘Meet the RAF’ exhibition. Personally I feel it is the perfect tribute to her fearlessness, strong spirit and valour and gives a great example of someone who embodies the best of the RAF.

My second story focuses upon Assistant Section Officer Joan Daphne Mary Pearson, who joined the WAAF in 1939. Her story is represented in the Support section of the ‘RAF Stories’ exhibition.

On 31 May 1940, at 1.15am an Avro Anson of No 500 Squadron crashed near RAF Detling, where Daphne Pearson was serving as a Corporal in the medical section. One of the bombs in the Avro Anson exploded killing the wireless operator and injuring the pilot and the other two crew members.

The explosion was very loud, and Daphne rushed to the crash site as soon as she heard it. She climbed into the wreckage of burning Anson, revived the stunned Flying Officer David Bond, releasing his parachute harness, and helped him to get clear.

Then she dragged him 27 metres away from the burning aircraft and administered first aid. Although he was in great pain, Bond gasped: ‘Go – full tanks and bombs’. When another bomb in the Anson, a 120lb, exploded, Daphne shielded the injured man with her body, saving him from the blast and shrapnel.

She stayed with the pilot until a stretcher party appeared. Then she hurried back to the burning wreck to find the fourth crew member, who was unfortunately dead. Unable to do any more, she went to the station sick bay, where she tended the wounds of the other two crew members until 3.00am. Five hours later, Pearson reported for duty as usual.

Corporal Pearson was awarded the Empire Gallantry Medal on 19 July 1940 and was commissioned as an officer shortly afterwards. She was the first woman to be decorated for bravery in the Second World War and her heroism was mentioned in Parliament by Prime Minister Winston Churchill.

In 1941, her medal was replaced by a George Cross, Pearson becoming the first woman to receive the new honour.

Daphne Pearson was a modest person and after the incident she wrote to her mother saying:

“My name has been sent to the King…but I hope nothing will be done about it. When I read of the things our boys did at Dunkirk my little bit is nothing at all.”

Our RAF Stories exhibition features Daphne’s remarkable story in the Support section as it gives us a perfect example of how unprecedented courage and self-sacrifice protects and preserves human life.

My third story is about three heroic WAAF telecommunications operators, Sergeant Joan ‘Elizabeth’ Mortimer, Corporal Elspeth Henderson, Sergeant Helen Turner. They joined the RAF in different years, from 1930 to 1940, but remained at their posts during heavy German bombing of their base, RAF Biggin Hill, in late August 1940.

Although their fighter station was badly damaged, they calmly continued to receive and pass on vital signals necessary for RAF squadrons. They were all awarded the Military Medal for their bravery.

Their story is featured in our Defence section illustrating strength in the face of danger and the iron will necessary to remain on duty even while the bombs are exploding around.

Our fourth story focuses upon Corporal Lauren Smith, the great-granddaughter of a member of the WAAF during the Second World War. Lauren joined the RAF in 2009 and her story is represented in our exhibition Meet the RAF with a silhouette.

Lauren’s great-grandmother Joyce Edwards was a former Women Auxiliary Air Force cook. Her husband, John Madge, served in Bomber Command as a Rear Gunner in Lancasters sacrificing his life in 1944.

When her great-granddaughter joined the RAF, Joyce was delighted. 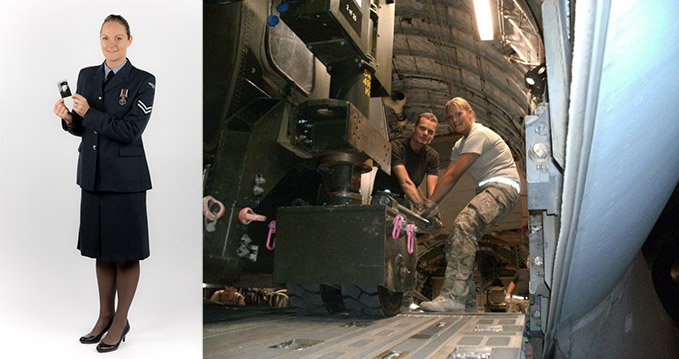 At her passing-out parade Lauren was proudly carrying Joyce’s photograph in her tunic pocket. As she says, in a video that can be seen in our exhibition, ‘I was thinking of Joyce and she was with me throughout my passing-out parade’.

Recently Lauren received the priceless opportunity to sit in the Rear Gunner seat of the Battle of Britain Memorial Flight’s Lancaster, the same position as her great-grandfather once sat in his aircraft.

She confessed: ‘It was such a privilege and honour to sit there, I must say. I felt a little emotional climbing into that seat, realising how daunting it must have been for him and the crew during the war.’

Each of these extraordinary women have very different stories. Stories that are woven throughout each of our new exhibitions to inspire young women who visit our London site.

In our next blog we will examine some of the great men that are represented in our new exhibitions.

In the meantime, if you have been inspired by this blog and would like to learn more about the women featured in it their stories will be on display from 30 June when we will re-open our London site to the public. We look forward to welcoming you then.