RAF experiences of VJ Day in the Far East

Following the end of the War in Europe, America and Britain now focused their efforts on the defeat of Japan. By July the Americans had occupied the island of Okinawa, the last step of their island hopping campaign before the invasion of the Japanese mainland. The Burma campaign had almost come to an end and, Commonwealth troops were preparing for Operation Zipper, an amphibious landing on the coast of Malaya. It was expected that the war against Japan might continue well into 1946 if conducted by conventional methods. However, the successful detonation of an atomic bomb in New Mexico on 16 July changed everything. In this blog post, I will illustrate through the use of archive documents and memoirs how a few men of the RAF in the Far East heard of the Japanese surrender and how VJ (Victory against Japan) Day was celebrated.

On 26 July at the Potsdam Conference, Britain, America and China made the Potsdam Declaration calling for the unconditional surrender of Japan. The declaration had stated that failure to comply would lead Japan to face ’prompt and utter destruction’. The Japanese rejected the ultimatum and so it was on the 6 August that the US Army Air Force (USAAF) dropped the first atomic bomb on Hiroshima to be followed three days later, on the same day the Soviet Union declared war on Japan, with another on Nagasaki.

The next day the Japanese government, through Swiss intermediaries sought to accept the Potsdam Declaration, news of the potential surrender lead to premature celebrations to the end of the war. The headlines in the ‘The Rangoon Liberator’ of 11 August announced ‘Japan Surrenders: Rangoon goes wild with joy’. It was reported that British and Indian serviceman were celebrating and singing in the street, British soldiers shouting ‘Roll on the ship home’ and the Indian troops ‘Angris-ki Jai’ which reportedly means ‘Up the British’, although the newspaper goes on to report that the White House and Downing Street had not confirmed the news.

No. 79 Squadron which was stationed at Meiktila in Burma, operating Republic Thunderbolts in the ground-attack role, were also premature in their celebrations of VJ Day as their Squadron diary recorded

A somewhat premature report was received during the evening of 10th August, of the Japanese surrender. The fact that the report was premature was then not known, and in consequence everybody went madly gay. The news the following morning that the Jap had not in fact surrendered was rather an anti climax to the previous nights ‘peace celebrations’. Some ten days later the Japanese surrender was a confirmed fact, but alas, the camp was ‘dry’ all our beer had been consumed during the celebration of the pseudo victory night. However, a special beer and spirit ration was issued for VJ day, but on one bottle of beer per man the camp was strangely quiet. 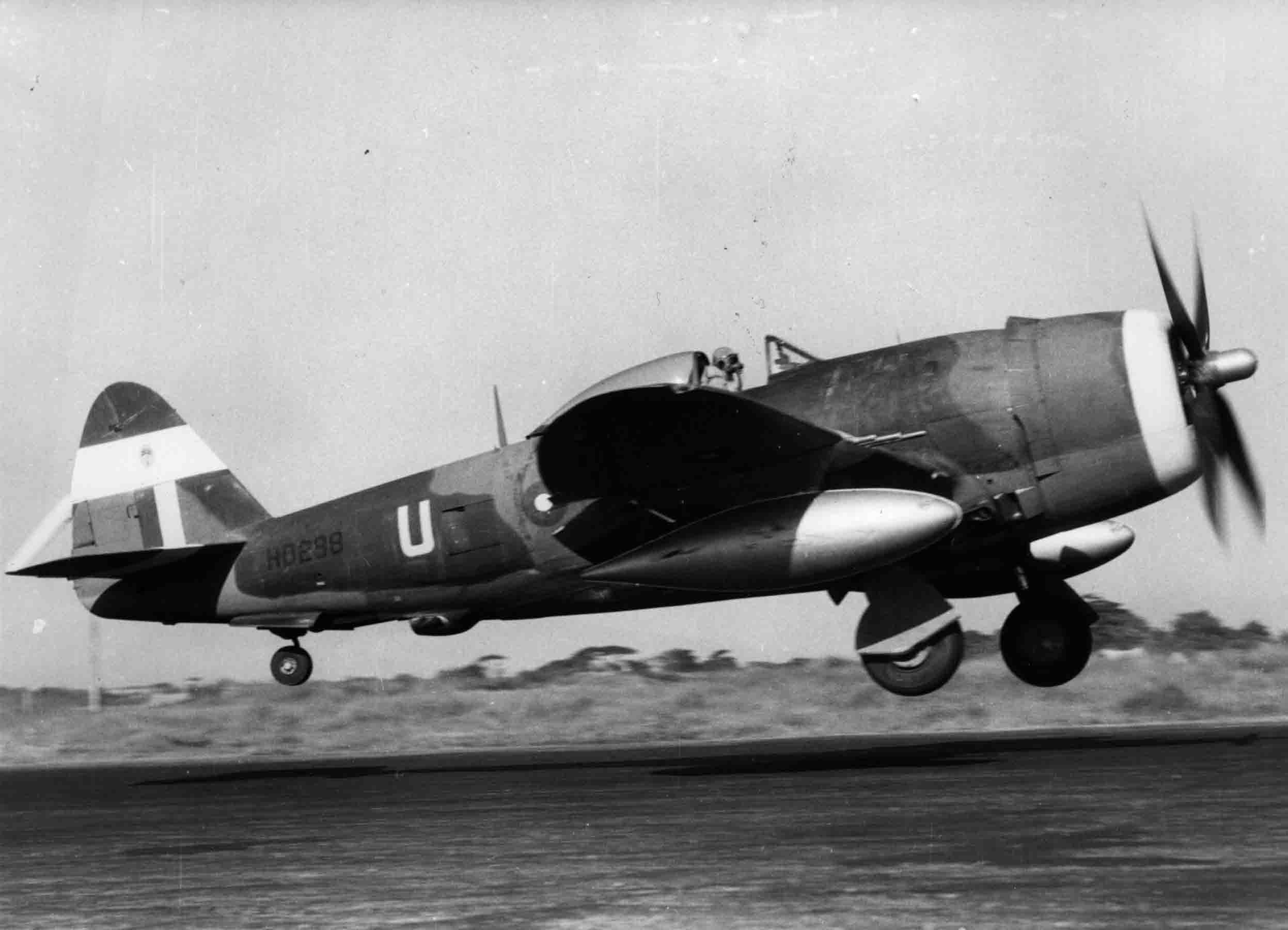 After five days of background negotiations the ceasefire was agreed to and on 15 August at 12.00 Japanese Summer Time the Emperor addressed his people on the radio, for the very first time, to announce the surrender.

Unlike No. 79 Squadron’s lack of liquid refreshment for VJ Day, Flight Lieutenant Norman Currell of No. 31 Squadron had a surfeit. No. 31 Squadron had moved temporarily out of the line to prepare for the invasion of Malaya and Singapore. Flt Lt Currell had been sent to Mingaladon airfield to prepare for the arrival of the Squadron, there he received an order to indent for ‘sufficient booze’ for a victory celebration. However, the squadron was sent directly to Akyab leaving Flt Lt Currell with a dozen tents and drinks for 300. Having struggled to pay for the drink, Flt Lt Currell managed to offer mess facilities and a choice of drinks to crews from other units transiting through which managed to ‘..not only pay for their drinks but also to finance our own.’ 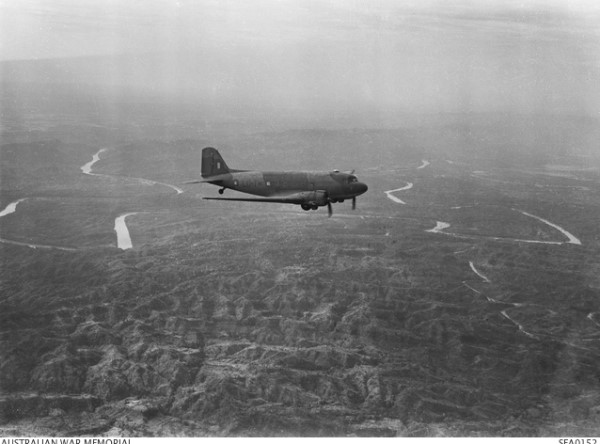 It is unlikely that No. 31 Squadron could have gone ‘madly gay’ as although the war was over the Douglas Dakota transport aircraft they flew were still required to support the Army and Special Operations Executive Force 136 . Likewise, No. 356 Squadron operating Consolidated Liberators from the Cocos Islands recorded no celebrations in their unit diary and no let-up in their operations flying four to five sorties a day throughout August dropping Red Cross supplies and humanitarian aid across Malaya and Sumatra. 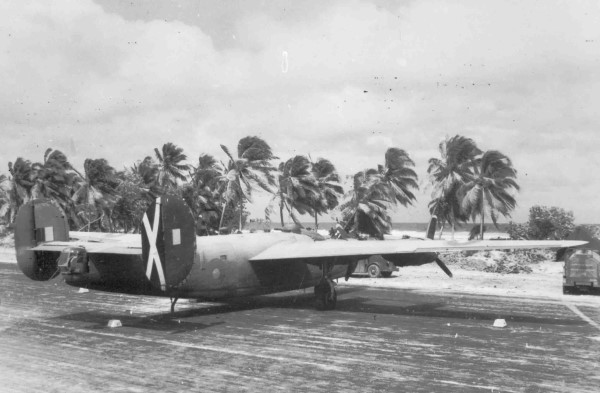 Also serving on the Cocos islands was Buster Honour, who was caught by the surprising speed with which the war came to an end. In a letter of 16 August to his mother he wrote:

The war finishing so swiftly really shook me, and all the rest of the boys too I never expected to see an end for at least another nine months. We out here, were only just beginning to start the war. That’s of course with the exception of the Burma boys. Of course everyone here is eager to get back as soon as possible. 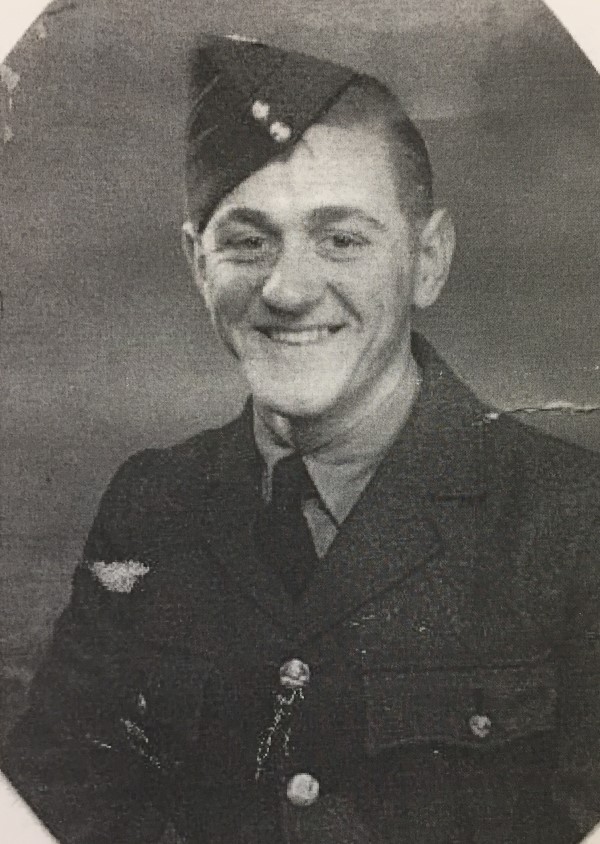 For others like Corporal George Newman, who was to about to enter the theatre onboard His Majesty’s Troopship Empress of Australia. A member of No. 5358 Airfield Construction Wing, they had just sailed from Hawaii in order to construct and maintain airfields on Pacific islands from which RAF heavy bombers of ‘Tiger Force’ would operate against Japan, when news of the Japanese surrender came through. The ships printing press quickly produced a souvenir air mail letter on which Newman writes to his mother ‘…our plans are now likely to be revised and our destination changed, not yet a while to go home, but almost certainly to a healthier spot than the original one. ‘ 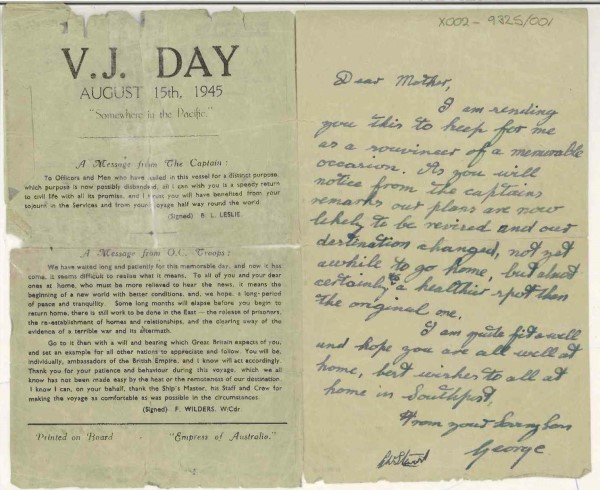 Instead of the Pacific islands , HMT Empress Australia sailed straight for Hong Kong and No. 5838 Wing set about making RAF Kai Tak operational again. Others like Cpl L Ransom, who had spent four years in the Far East as a driver, were just eager to get home, as he wrote in his memoir that he ‘…was browned off and totally exhausted and I just longed for my boat ticket to arrive…’ . On 12 August he received news that he was to go home, along with two other colleagues from his unit they were at a transit camp in Rangoon on the night of VJ Day


The offices of the Burma Railways-devoid of everything, even the odd chair-served as the transit camp. There was no lighting, no nothing in fact. So, on a night when the 3 of us might have been celebrating VJ Day, there we were, with one bottle of beer we had managed to obtain, squatting on the floor with just the light of a candle to brighten proceedings.

However, dismal Cpl Ransom’s surroundings may have been they were better than the Prisoner of War camp in which Wing Commander Humphrey Sullivan was incarcerated in. Sullivan had been the Air Officer Commanding, Hong Kong at the time of its capture in 1941. Sullivan’s diary records on 5 August ‘Have got my fifth dose of amoebic dysentery for which there is no Emetine. Weight now 123lbs (56kg)’. On 10 August Sullivan writes ‘Red letter day’ it is unclear if this is hearing the news of the possible surrender of the Japanese or of the dropping of the second atomic bomb. On 16 August the news of the surrender reaches the camp and Sullivan writes ‘After 5 days of dreadful suspense of rumour and ? we have heard the wonderful news.’ 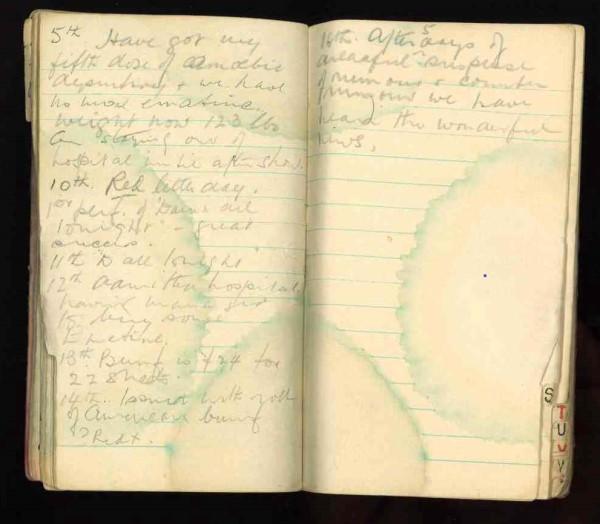 The news of the surrender reached Sullivan quickly, for some the news took longer to filter through James McEwan, was an RAF Prisoner of War on the Japanese mainland where he was imprisoned at Ohama, here prisoners of war were forced to work in a coal mine. After many months of malnutrition and over work in the mines, McEewan was placed on the sick list and set to work in the camp’s garden. On 9 August a fellow prisoner pointed out something strange in the sky

All work had come to a stand still. The men leaned on their chunkals…Every eye was fixed on something that had just made its appearance in the sky. …a gigantic column of smoke was rising swiftly into the high heavens , its outer skin glowing with a nacreous iridescence, within it something writhing as if alive and struggling to get out.. Its head bulged out, spreading like a mushroom in the sky. Fascinated and awestruck, each man continued to gaze, saying nothing. 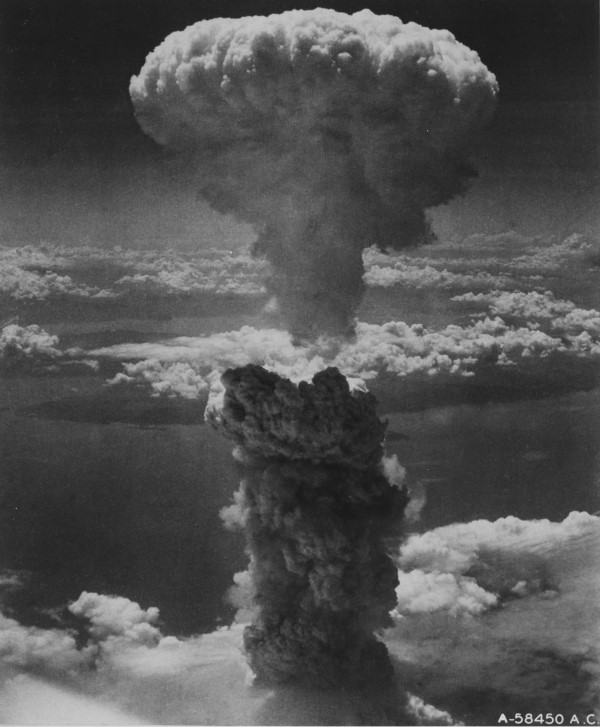 Despite having witnessed the explosion of the second atomic bomb, the prisoners were unaware of what it was they had seen. Some said it was an explosion at a factory, rumours were rife, the guards behaviour changed, but still no firm news was received. A week after the surrender, on 22 August, the senior Australian and British officers took it into their hands to find out what was happening and demanded an interview with the camp commander. T

hey informed him, through bluff, that they had heard on an illegal radio in the camp that the war was over and that all weapons had to be surrendered to the nearest PoW camp by noon or else it would be reported to US headquarters and appropriate action would be taken.

The two officers returned to camp worried that their bluff might be called, then at noon the camp gates opened and the Japanese trooped in to surrender their arms, the healthiest prisoners taking the most modern looking weapons and forming a guard. Two days later a Japanese officer appeared with an interpreter to inform the prisoners that the war was over and that they would soon be under the Allied authorities.

As was witnessed by McEwan it took time for the news of the surrender to filter across the expanse of Japanese occupied territories in South East Asia and the Pacific islands. The final official surrender was not signed until 2 September onboard the USS Missouri, the day that America recognises as VJ Day and also the date that the two British campaign medals for the Far East, the Burma and Pacific Stars, have as their end qualifying date. 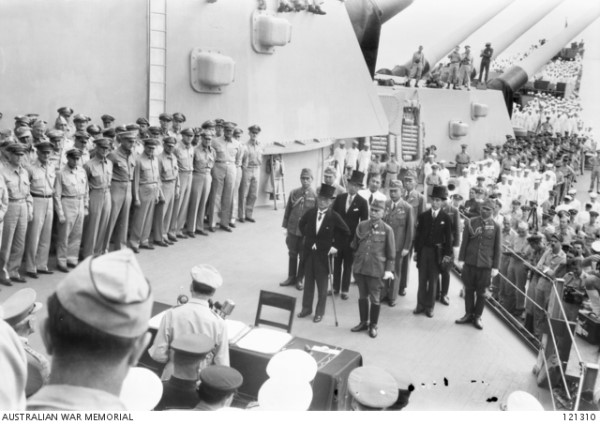 With the war over priorities suddenly changed and some forces were redirected into the three new tasks facing South East Asia Command – the recovery and repatriation of Allied prisoners of war and internees; the rounding up and repatriation of Japanese occupation forces and the return of much of the territory to colonial rule. The war was over but there was still much work to be done.
Sources