Fifty years after it was founded, an adventure and completely new experience awaits visitors to the RAF Museum, London when it re-opened its doors to the public on ‘Armed Forces Day’.

The result of a major fundraising campaign, considerable planning and hard work by all concerned in order to ensure that the Museum can be fit for purpose and better display aircraft and artefacts covering the first one-hundred years of the Royal Air Force, the now transformed RAF Museum London will make substantive use of 21st century technology in order to provide younger visitors with a hands-on experience learning adventure of the RAF past, present and future. 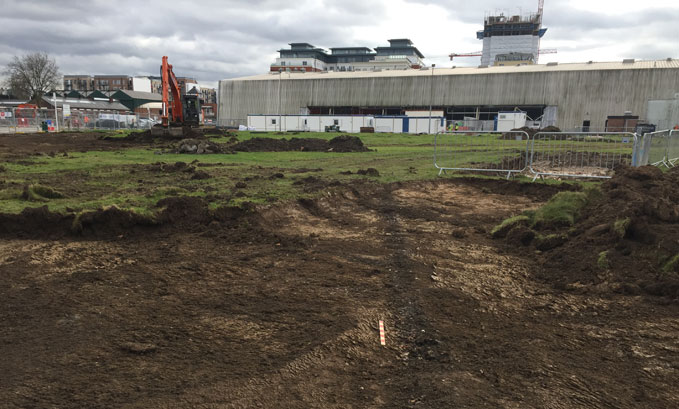 The visible transformation of the RAF Museum London includes a major new extension, revamping of buildings, restaurants and facilities and landscaping together with provision of three new very innovative galleries designed to show Royal Air Force history and achievement, what the Force is today and importantly, a glimpse of what it plans to be tomorrow.

An important legacy from the 50th anniversary of the Royal Air Force back in 1968, the RAF Museum Hendon first opened its doors to the public in November 1972. Now, 100 years after the RAF was founded in 1918, the former RAF Hendon airfield site which since the Museum was established there has grown organically from what had been a few aircraft hangars left behind from the period that Hendon was a very active RAF station, to one that following the new investment can claim to represent one hundred years of the Royal Air Force in all its glory.

Along with its sister Museum at RAF Cosford, the RAF Museum London has long provided visitors not only with a formidable collection of aircraft, weapons, artefacts including copious amounts of technical equipment used by the RAF throughout its history, the people who flew and those that supported them, the all-important engineering and technical skills required, training, transport, Force Protection together with an understanding of the many other logistical and other support elements required. Importantly, the RAF Museum emphasises not only on the aircraft and people but also the many deployments of the Royal Air Force in action.

Younger visitors to this now very modern and fit for purpose Museum and who might one day wish to be a part of the RAF can look forward to a fully accessible, hands-on experience and learning adventure – one that modern day visitors to museums as important as this have come to expect them to provide. The importance to the RAF of the Air Cadets and University Air Squadrons over the years is very much in evidence too and there is plenty of emphasis on STEM, Skills and engineering to be found in various parts of the Museum. 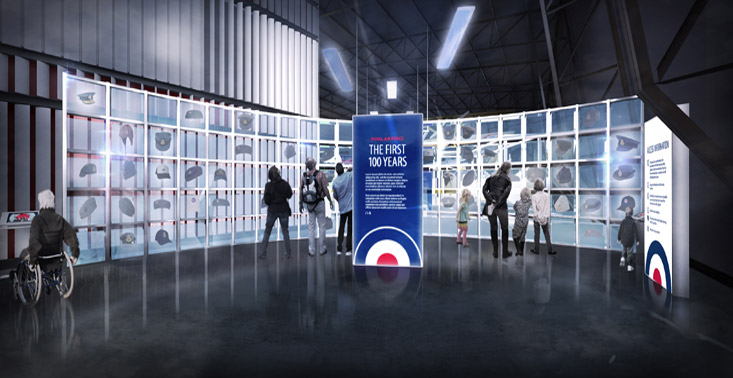 Following an investment in the region of £23 million of which £4.89 million has come from a Heritage Lottery Fund award and the rest from hard work on the part of the Trustees and organisers, grants and gifts from the public, there has been significant support from industry that combined has enabled transformation of the RAF Museum London to take place.

Over the past three years it has been a great pleasure for me to observe how the Trustees of the RAF Museum, led by Air Chief Marshal Sir Glenn Torpy, together and the CEO of the RAF Museum, Maggie Appleton and her very hard working staff, have put the remarkable change process together. What they have achieved in a relatively short period of time whilst the Museum remained open to the public has been remarkable.

BAE Systems was the Museum’s founding sponsor when the plan was still on the drawing board back in 2014 and suffice to say that without the significant support that this company provided along with Northrop Grumman, MBDA, Rolls-Royce, World Fuel Services and others, none of this would have been possible in such a short period of time. 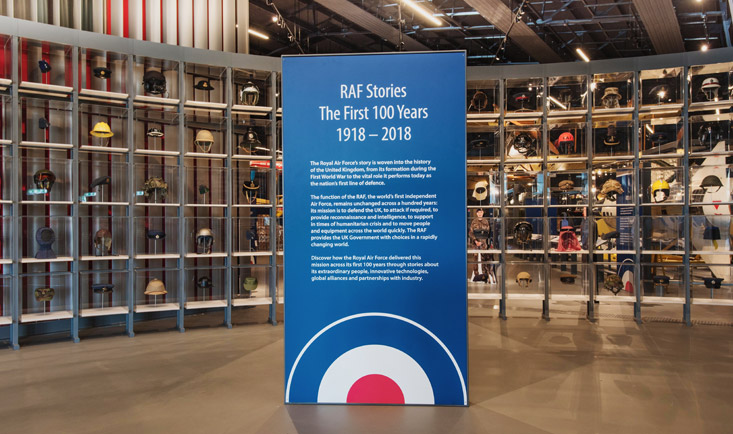 As mentioned above, substantial financial support was provided from the Heritage Lottery Fund and also from the State of Kuwait and for which the RAF Museum are I know very appreciative. Neither should we ignore the support provided through the HM Treasury LIBOR funding and the MOD support together with that from a large number of trusts and foundations and public donations. Entry to the RAF Museum continues to be free.

Over the past three years the RAF Museum London site has been transformed into a world-class national museum, one that can from within its permanent and expanded aircraft exhibition and substantial investment made in the innovative new galleries, provide visitors with the inspirational story and narrative that properly describes the RAF yesterday, today and what it will no doubt be tomorrow.

The RAF Museum’s purpose has always been to tell the story of the Royal Air Force through its people, through its world-class collections of aircraft at Hendon and at the sister location on the RAF Cosford base in Shropshire. Here visitors have been able to learn about policy, politics and power but also hear stories from people that have shaped and contributed to the RAF’s hundred year achievement. The RAF Museum has always been people-focused strategy and designed to appeal not just to those that have served but also to the much wider audience from within whom might well be found the air power engineers and scientists that the nation and the Royal Air Force need for the future. 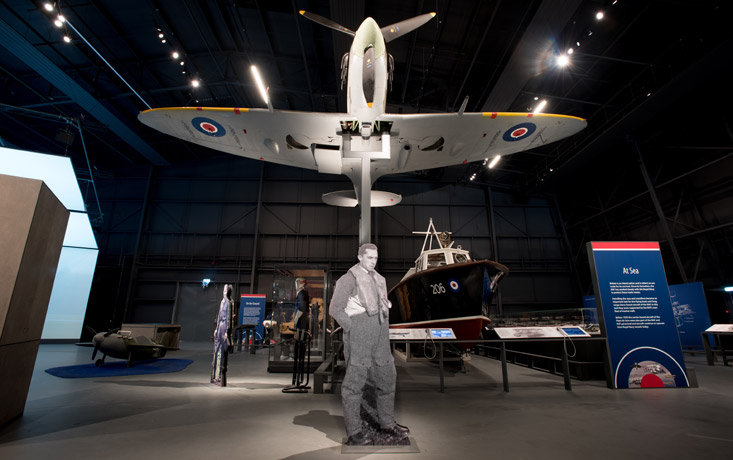 Telling the story of the first one hundred years of the world’s first independent Air Force and of how this has played such a significant role in the development of air power and the character of modern warfare is no easy task. Having watched the process in build and seen for myself complete with the new landscaping that far better reflects the historic RAF Hendon airfield as it was, having watched everything develop including new exhibitions and re-purposed historic buildings, I am left in no doubt that visitors to the ‘new’ RAF Museum will enjoy what they are able to see, feel, learn and imagine what it was like to be in the RAF and how the Force has developed through the past one hundred years.

From the first flimsy biplanes flown by members of the Royal Flying Corps and that battled it out over the trenches of Flanders in the Great War, to the RAF Spitfire, Hurricane and Lancaster Bomber aircraft that played such a significant role in World-War 2, through the English Electric Lightning, Phantom and Jaguar capability during the ‘Cold War’ and the Tornado GR4, Typhoon FGR4 capability that continue to be deployed today and not forgetting of course, the F-35 ‘B’ Lightning capability that is just entering service with the Royal Air Force at RAF Marham, what all these aircraft and the people involved have achieved and continue to achieve as they deploy and continue to conduct front-line operations with our NATO and other allies, will be there for all to see and better understand.

The primary role of the RAF Museum is not only to show and explore past RAF history from the beginnings to the present day and to look to the future but also to demonstrate the many and vitally important RAF trades and the people without whose loyalty, hard work and dedication behind the scenes no aircraft could ever fly. 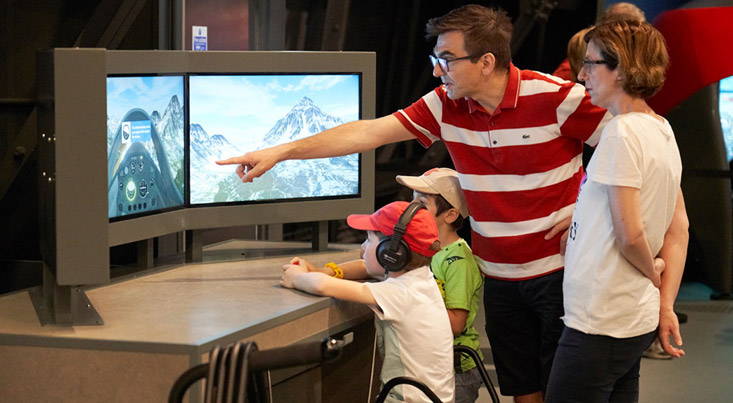 Importantly, much emphasis has been placed to ensure that past assumptions that museums such as this are merely about reflecting the past have been completely dispelled at the new RAF Museum by the ability it now has to offer so many tantalising glimpses of what the RAF may be in the future.
Telling the story of the first one hundred years of Royal Air Force history is no easy task and the investment that has been put in is not just about new buildings, expansion and, dare I say with tongue in cheek, much needed landscaping, but also about presentation and a narrative that leads visitors through a range of interactive exhibits, personal and inspirational stories and accounts from those that have been a part of the RAF’s history including pilots, crews, families and that at the same time as they garner through the past experience of the RAF enables visitors to join in the discussion to develop a future vision.

RAF Stories: The First Hundred Years – this has been designed to reflect the history of the Royal Air Force from its creation in 1918. The gallery captures the very many roles undertaken by the RAF across its first 100 years including momentous events of the Second World War and Cold War.
The gallery also covers significant advances in technology and aircraft design through that time span and that underpin the Royal Air Force capability whilst explaining the range of its operational responsibilities, from homeland defence to that of our dependent territories right through to expeditionary operations in partnership with other nations and NATO. 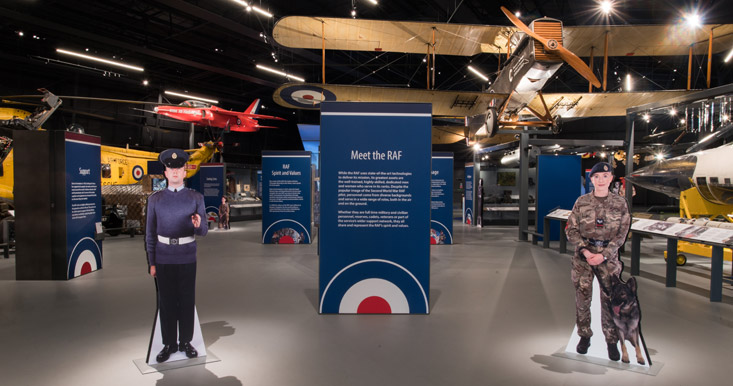 Importantly, this exhibition is designed to focus on the people and skills behind the technology in order to help young people connect past and present RAF and to be inspired to join the next generation of the Royal Air Force. Displays here focus on new inventions and technology, evolving as the world changes and as the Royal Air Force has and will respond within its second century. Somewhere in all this may well be found references to another first achieved by the RAF Black Arrows aerobatics team which was formed in 1956 using Hawker Hunter jets, the RAF Red Arrows Aerobatics Team that followed them flying first the Folland Gnat and since 1979, BAE Systems Hawk jets. 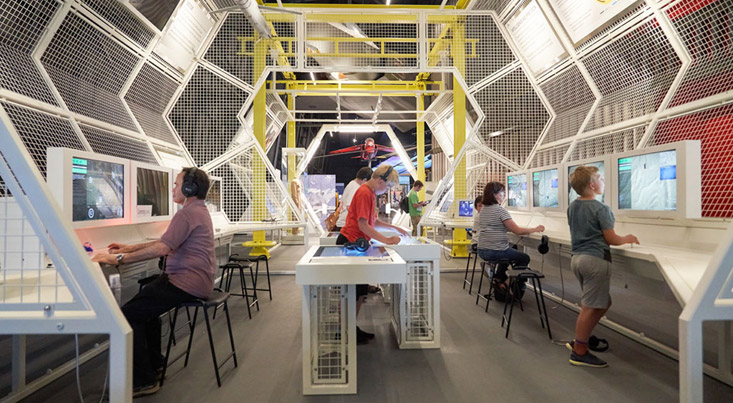 The RAF in an Age of Uncertainty – the gallery here is designed to tell the story of Royal Air Force operation and deployment since the liberation of the Falkland Islands in 1982, the Cold War, Operation DESERT STORM in Iraq, the liberation of Kuwait together with operations in the Balkans, Afghanistan and Libya and presumably also, the ongoing OP, Shader deployment in RAF Akrotiri over Iraq and Syria today.

The period involved here covers considerable developments in the invention and application of new technologies in weapons and weapons delivery advances, in communication and networks, ISTAR, (Intelligence, Surveillance, Target Acquisition and Reconnaissance) GPS and other capabilities many of which are still in use by the RAF and global partners within the NATO alliance today. 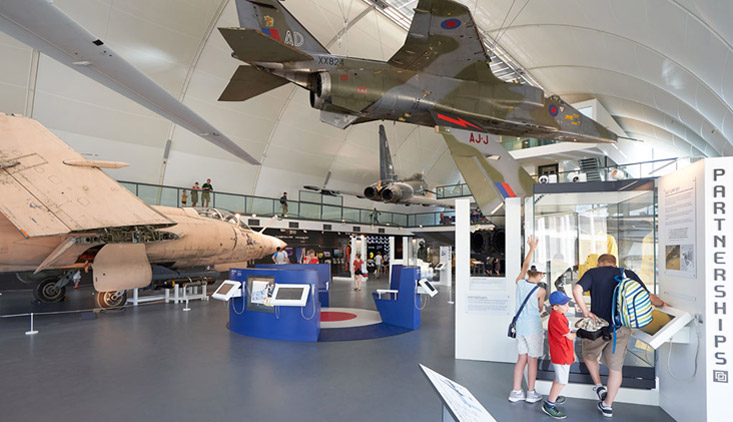 As a final comment it is worth noting that the RAF Museum team in London are also engaging local people to the north London site with a series of ‘Historic Hendon’ projects. In addition and as was equally well demonstrated in respect of its importance and a major element of the RAF Cosford Air Show two weeks ago, a new Science, Technology, Engineering, Maths (STEM) and Heritage programme is designed to inspire people of all ages to get hands-on with STEM activities, to increase engagement with and learning from the RAF Museum’s collections and stories and also to encourage young people into vital STEM careers.

Meanwhile, it is intended that the RAF Museum’s physical transformation will be complemented by RAF Stories Online, a new digital sharing project aimed at promoting conversation with a global audience and also to help connect people everywhere to the RAF story.

As a partner in RAF100, the RAF Museum’s desire to fulfil the RAF’s together with its own ambition to Inspire sits front and centre alongside the clear achievement of Commemorating the service’s first 100 years, celebrating the spirit and values of the people who have contributed to the RAF story and inspiring those who may be part of the Royal Air Force story of tomorrow.

The transformation of the Hendon site has gone a very long way to establishing the RAF Museum today as being one of the UK’s great cultural organisations. I have been left in no doubt that this is only the beginning! 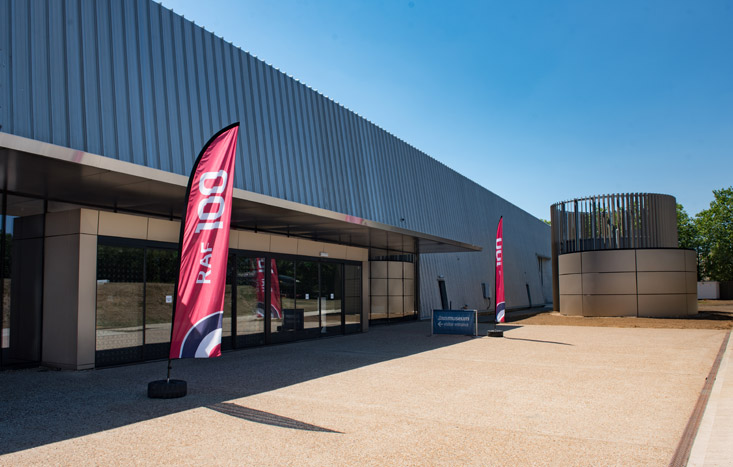 Is an independent Analyst, Commentator and Defence Advisor engaged primarily in Strategic Influence Support related to all aspects of military and defence in the UK plus work in support of domestic and international commercial aerospace industry and aviation related issues.