In last week’s blog we revealed several amazing stories about heroines who served in the RAF. My blog this week is devoted to four incredible men, who either influenced or recorded the history of the RAF.

Our first story focuses upon Flight Lieutenant Paul Brickhill, whose story can also be viewed in the Meet the RAF section of our ‘RAF Stories’ exhibition.

Born in Australia in 1916, Paul Chester Brickhill volunteered as a member of the Royal Australian Air Force in January 1941. In March 1943 while flying his Spitfire for the RAF he was shot down and eventually imprisoned in Stalag Luft III, the ‘escape-proof’ camp located at Sagan in Silesia.

In Stalag Luft III, Brickhill was recruited by the ‘X’ Organisation, led by ‘Big X’, Squadron Leader Roger Bushell, who masterminded the mass break-out from the camp that later became known as ‘The Great Escape’. As Brickhill suffered from claustrophobia, he couldn’t become one of the escapees. Instead he became the historian of this epic escape.

On the night 24/25 March 1944, 76 prisoners escaped the camp. 73 of them were recaptured within a few days and 50 of them were murdered by Gestapo. Only three of the initial escapees successfully reached Britain.

In 1950, Brickhill published his book ‘The Great Escape’ which immediately captured the British public’s imagination. This was followed in 1951, by his book ‘The Dam Busters’, and four years later, he finished ‘Reach for the Sky’, the biography of Group Captain Sir Douglas Bader. In 1963, a thrilling Hollywood film brought the inspirational story of the Great Escape to a worldwide audience.

His books, and the iconic feature films they inspired, defined the public’s understanding of the RAF after the Second World War and have been chosen for display at our London site alongside his own story.

Philip Louis Ulric Cross was born in 1917 in Trinidad. After the outbreak of the Second World War in 1939, and the Fall of France, the young Trinidadian decided to sign up. As he said: ‘The world was drowning in fascism and America was not yet in the war, so I decided to do something about it and volunteered to fight in the RAF.’

Cross arrived in Britain in November 1941 and trained to be a Navigator for a year. He was posted to No. 139 (Jamaica) Squadron which was equipped with bombers paid for by the people of Jamaica.

As an excellent Navigator, Pilot Officer Cross was selected to join the elite Pathfinder Force, which had the difficult, dangerous and vital task of identifying and marking targets for bombing raids. Cross successfully completed 80 high-risk operations over Germany and occupied France and twice refused to be rested.

He was promoted to Flying Officer and in June 1944 awarded with the Distinguished Flying Cross (DFC). In 1945, he received the Distinguished Service Order (DSO) in recognition of his ‘fine example of keenness and devotion to duty’ and his ‘exceptional navigational ability’.

Ulric Cross’s story is told in the Attack section of ‘RAF Stories’ – a perfect tribute to a brilliant and fearless specialist who completed numerous dangerous missions to ensure the success and eventual victory of the Allied Forces.

Our third story focuses on one of the most memorable events in the Battle of Britain. Flight Lieutenant Raymond Towers Holmes’ story is told in the Defence section of RAF Stories.

Ray Holmes joined the RAF Volunteer Reserve as a part-time flyer in 1937 before becoming a member of No. 504 Squadron in June 1940.

On 15 September 1940, No. 504 Squadron, which was based at RAF Hendon at the time, was called upon to intercept enemy bombers heading towards Central London. Sergeant Holmes leapt from a bath to take his place in his Hurricane fighter aircraft.

Holmes saw a Dornier on fire aiming for Buckingham Palace and rammed it with his Hurricane without hesitation. His Hurricane’s wing cut through the Dornier’s rear fuselage. The bomber broke up and crashed just before Victoria Station while Holmes’ Hurricane smashed into Buckingham Palace Road at the speed of 400 miles an hour. Holmes successfully bailed out of his aircraft landing in a dustbin in Pimlico without any serious injury.

The episode was witnessed by thousands of astonished Londoners and in the process Holmes became a national celebrity due to his bravery. He was invited onto BBC Radio for an interview and enjoyed an audience with the King and Queen.

Our fourth story is about legendary character, Lieutenant-Colonel Thomas Edward Lawrence, who gained international fame as Lawrence of Arabia. His breath-taking story is told in the Defence section of our ‘RAF Stories’ exhibition.

Born in 1888, Lawrence was an archaeologist, military officer and diplomat. Most of his activity was based in the Middle East and related to intelligence and diplomatic missions during the First World War. However, he joined the RAF twice, both times under different pseudonyms. During these periods, he helped with the development of high-speed launches that were designed to recover airmen forced down into the sea. 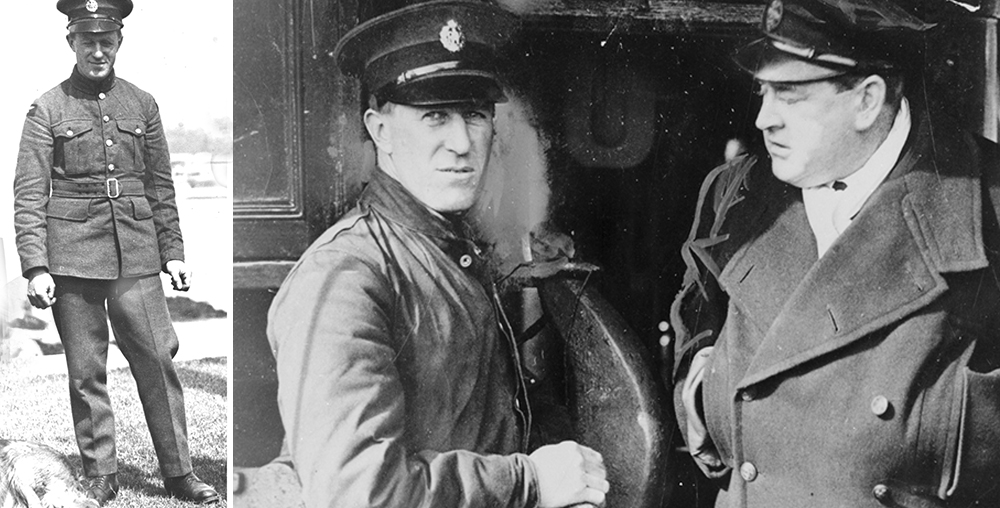 As a talented author able to vividly describe all the breadth and variety of his activity, Lawrence had become famous after publishing a number of successful books. In ‘The Mint’, he talks about his life in the RAF. 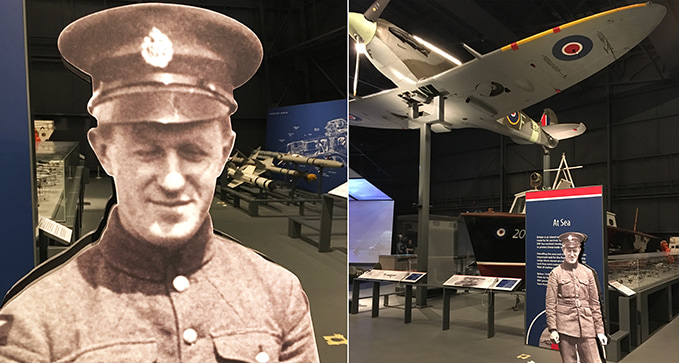 Visitors will be able to meet his silhouette and view the sea-plane tender that he designed just by the Mk Vb Spitfire that is on display in RAF Stories at our London site.

All these incredible stories about four remarkable men are part of our brand-new exhibition ‘RAF Stories: The First 100 years, 1918-2018’ which opens to the public in June 30, the Armed Forces Day. If you have enjoyed this blog, please visit our exhibition to learn more about these great men.