In my last blog, I explored the type history of the Sepecat Jaguar, one of two new aircraft to enter the Museum’s collection as part of the RAF Centenary Redevelopment Programme at the Museum’s London site last year.

In this blog, I will explore the type history of the second new aircraft to arrive at ‘Hendon’ last year, this being the Westland Sea King and the individual aircraft history of XZ585.

The Sea King has been a tremendously successful and adaptable design with a career spanning nearly 60 years, it has served in the air forces of over 20 nations and been built under licence by Britain, Canada, Italy and Japan.

It was developed by Sikorsky for the United States Navy in the late 1950s in response to a requirement for a helicopter that would combine both the hunter and killer roles of anti-submarine warfare in one airframe. At the time, the United States Navy were operating pairs of Sikorsky SH-34 Seabats on anti-submarine operations. The for this new development was that the Seabat was not powerful enough to carry both the radar (hunter) and the torpedoes (killer). 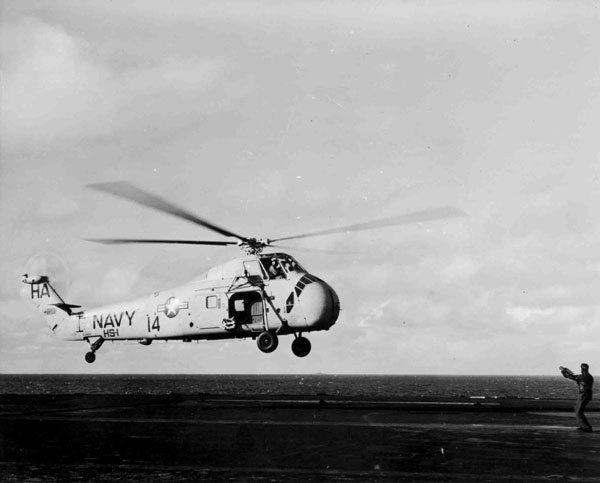 The new design designated the Sikorsky S.61 first flew in March 1959, and after thorough testing it entered United States Navy service in 1961. The Sea King had some notable design features:

• The engines were located on top of the fuselage as opposed to in the nose as had been the case with the earlier Sikorsky designs such as the Seabat and Chickasaw, making the interior of the aircraft more spacious to accommodate the anti-submarine equipment and weaponry.

• The cockpit and rear cabin were all on one level making communication between the pilots and the cabin crew much easier.

• A watertight hull with stabilising floats, which also housed the retractable undercarriage, gave it a limited capability of operating on calm waters, although the design was predominantly to allow for safe evacuation and to keep the aircraft afloat in order to facilitate recovery if forced to land on water. 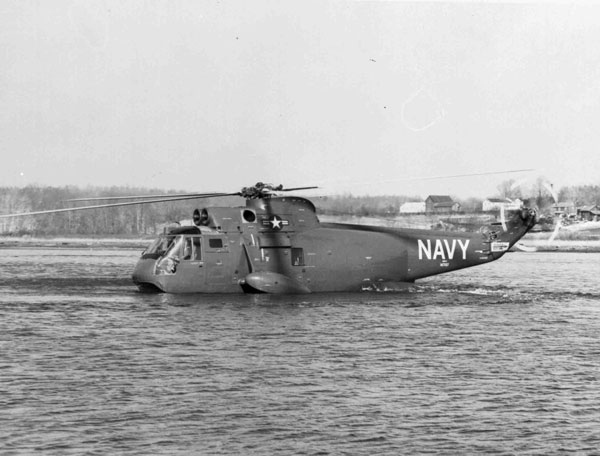 British interest in the Sea King first came from the Royal Navy who like their American counterparts required a more powerful anti-submarine helicopter with greater endurance in response to the development of faster nuclear-powered submarines by the Warsaw Pact, and so it sought to procure the Sea King.

Sikorsky helicopters such as the Seabat and Chicksaw had been built under licence in the UK by Westland and known respectively as the Whirlwind and the Wessex. Westland had previously manufactured fixed wing aircraft but the company took a bold decision at the end of the Second World War to abandon manufacturing fixed wing aircraft in favour of producing licence built Sikorsky helicopter designs. Sikorsky were keen to bid for the contract to supply the Royal Navy with its Sea Kings. Due to political considerations they agreed to the aircraft being built under licence by Westland.

Westland’s license was for the airframe and rotorhead design, thus allowing them to make modifications to nearly every other aspect of the aircraft, using alternative engines, avionics, electric, pneumatic and hydraulic systems. An order for 60 aircraft was placed with Westland in 1966. In order to speed up production four American built aircraft were purchased by the company for design and development work.

The prototype took its first flight in 1967, initially entering service with 700 Squadron for intensive trials in 1969. As well as the anti-submarine role, the Royal Navy also employed Transport, Airborne Early Warning and Search and Rescue variants. In all more than 140 Sea kings were built for the Royal Navy.

As with the Navy, the RAF were dissatisfied with the range of their Search and Rescue (SAR) helicopters, the Whirlwind and Wessex. The RAF’s requirement for an all-weather, long range Search and Rescue helicopter prompted their interest in the Sea King which was already a proven performer with the Royal Navy and an initial order for 15 aircraft was placed in 1975, with a further four airframes ordered later.

The RAF Variant, Sea King HAR.3, had uprated gnome engines, a Tactical Air Navigation System (TANS) for improved all weather and night operations, a full range of radio navigation aids and increased fuel tank capacity which almost tripled the radius of operations to around 270 miles as opposed to the 95 miles radius of the Wessex.

The Sea King’s winch was four time longer than that of its predecessors’ and the rear bulkhead was moved nearly two metres to give a longer cabin allowing it to carry significantly more survivors, up to 17 or six stretchers.

The Museum’s example, XZ585 was the first of the RAF’s Sea Kings to fly, making its maiden flight on 6th September 1977. The Sea King entered Squadron service the following year with 202 Squadron, however, XZ585 was retained by Westland for development work. 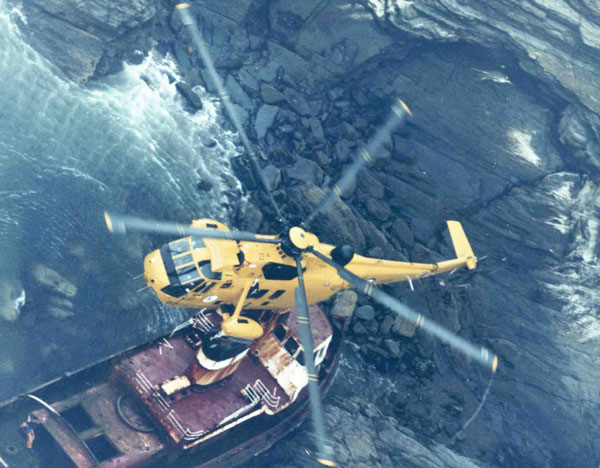 The RAF’s second SAR squadron re-equipped with the Sea King in 1997. Both these squadrons had detached flights around the country along with the Royal Navy’s SAR helicopters they provided continuous search and rescue capability all over Britain.

In addition, a single RAF Sea King was despatched to Ascension Island during the Falklands conflict where it largely flew aerial replenishment sorties to ships supporting the task force. Following the end of the conflict a permanent detachment of RAF Sea Kings was established on the Falklands to provide search and rescue and general transport duties. Initially, the aircraft operated as part of a detached flight of No. 202 Squadron before being re-designated 1564 Flight.

As with all aircraft there were continual improvements with new radar and navigation equipment being fitted, six airframes were updated to Mk.3a standard in the mid-1990s, this provided the aircraft with an improved auto-pilot, navigation system, flightpath computer and radar altimeter. Not all of these modifications were well received by the pilots who found a dead area in the auto pilot between pilot and autopilot inputs, leading to the aircraft to wander in the hover. However, with practice pilots got used to this characteristic and appreciated the positive aspects of the other upgrades to the aircraft’s performance.

With such a small number of airframes and a long period of service the Museum has been fortunate in being able to interview a number aircrew who had flown in XZ585. Last year while visiting the Museum to be interviewed, Master Aircrew Paul Challice donated a detailed written account of his RAF service to the Archive. In his memoirs are details of all the SAR operations he undertook, many in XZ585, these have been added to the aircraft’s history which can be viewed on line here.

The aircraft’s history and Paul’s memoirs show the varied nature of search and rescue operations, ranging from many uneventful call outs where no action was required to more dramatic rescues at sea and off mountains and cliffs to the sad recovery of bodies. 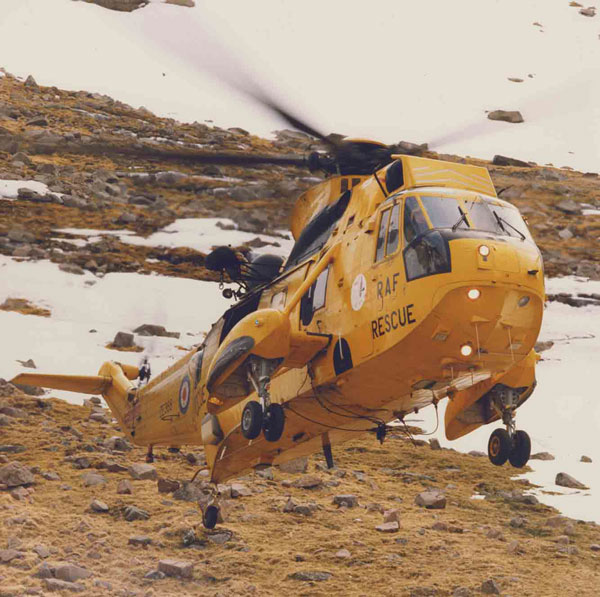 Below is sample an excerpt of operations flown by Paul on XZ585 in early 1987 whilst serving with D flight of No. 202 Squadron at RAF Lossiemouth.

12 Feb 87, 2.00 hours flight Lossiemouth to Raigmore to pick up incubator + doctor + midwife – to Wick. Return to Raigmore with two incubators with babies – high speed run due to failing incubator battery!

Paul’s last flight as a crewman of a Sea King was on XZ585 in January 1989. The aircraft was undertaking a training sortie with the Lochaber Mountain Rescue Team, having made several approaches to land in high wind conditions, an engine failed as the pilot attempted to go around again, the aircraft then hit the ground at about 60 knots, the rotors dug into the snow and the aircraft slewed round onto its starboard side. Remarkably no one was seriously hurt. Paul recalls the events of that day ….

In 2011 the government announced its intention to retire its fleet of Sea Kings in both the Royal Air Force and the Royal Navy and to privatise search and rescue provision in the UK. Bristow Helicopters won the tender and after more than 75 years of Search and Rescue operations in the UK the RAF and Navy retired their Sea Kings and the RAF’s Search and Rescue Force was stood down in 2016. The Royal Navy retired the last of their Sea Kings in September 2018 after nearly 50 years of service.

The RAF haven’t quite relinquished their Search and Rescue role, No. 84 Squadron still operates a Search and Rescue service in Cyprus with the Griffin HAR.2. Statistics for Sea King call outs have not been recorded in isolation, but at the time of disbandment of the final six SAR bases since 1983, over 34,000 call outs had been received and nearly 27,000 people had received SAR assistance.

And what of XZ585? The damaged airframe was airlifted out of the crash site by an RAF Chinook, she was then sent to Gosport for repair by the Royal Navy, after which she returned to service, making her last flight on 23 April 2015, from RAF Valley, Anglesey to HMS Sultan, Gosport, having flown 14,472 hours and conducted a total of 533 winch lifts – a truly worthy addition to the Museum’s collection.