Today is the 70th anniversary of the arrival at Tilbury Docks of nearly 500 Caribbean migrants on board HMT Empire Windrush. 22 June also sees the inaugural national Windrush Day, commemorating and celebrating the contribution of the ‘Windrush Generation’, and their descendants, to re-building Britain after the Second World War. The Empire Windrush also has a special place in the history of the Royal Air Force.

During the Second World War 6,000 African-Caribbean men and women volunteered to serve in the Royal Air Force. Their reasons for enlisting varied. Like young people all over the Empire and Commonwealth, some joined up for economic or personal reasons or to seek adventure. Others, such as Flight Lieutenant John Blair from Jamaica, came to fight tyranny:

“We knew that we were all in this together and that what was taking place around our world had to be stopped. If Germany had defeated Britain, we could have returned to slavery.”

Corporal Harold Sinson from Guyana just wanted to do his part:

“I had this feeling of being able to do something, and if the air force thought we could help, so be it, we would go.”

Corporal Sam King, another Jamaican, heard the appeal for men and turned to his mum for advice:

“She said “’My son, the mother country is at war. Go – and if you survive, you will not regret it.’”

The Black volunteers arrived in Britain with some having paid their own passages to come. Around 5,500 were engaged by the RAF as ground staff and 450 as aircrew; while 80 women joined the Women’s Auxiliary Air Force (WAAF). The largest Caribbean contingent came from Jamaica, and in February 1945 there were over 3,700 Jamaicans in air force blue. In Africa, the colonial authorities obstructed enlistment and only 60 volunteers were accepted. A further 5,200 entered the West African Air Corps, a local auxiliary force supporting RAF units based in Nigeria, Gold Coast (Ghana), Sierra Leone and Gambia. A number of Black Britons are also known to have served.

The newcomers were joining an air force that had only abandoned the Services’ ‘colour bar’ against non-European enlistment in October 1939, but which now took racism seriously. An Air Ministry Confidential Order of June 1944 was unequivocal:

“All ranks should clearly understand that there is no colour bar in the Royal Air Force…any instant of discrimination on grounds of colour by white officers or airmen or any attitude of hostility towards personnel of non-European descent should be immediately and severely checked.”

The rules against racial discrimination introduced by the RAF in the 1940s would not be seen in the civilian workplace until the 1970s. It is also worthy of note that between 1944 and 1947, the Junior Service fought a successful battle in Whitehall against the Army and the Navy, which both favoured the re-imposition of the ‘colour bar’ in peacetime.

One hundred of the African-Caribbean volunteers became officers and 103 were decorated for gallantry or exceptional service. Of the 450 aircrew that served with the RAF or Royal Canadian Air Force, 150 were killed in combat or in flying accidents. One can only speculate what effect the loss of so many good men had on the small populations of the Caribbean islands.

After the war, most of the Black airmen and airwomen returned to Africa and the Caribbean. They were proud of having played their part in the defeat of Nazism and they carried with them the dynamic ethos of the RAF; with its emphasis on efficiency, teamwork and achievement. Many of the veterans now became lawyers and teachers, or entered politics or journalism as they sought to improve themselves and change their homelands for the better.

The arrival of HMT Empire Windrush at Tilbury on 22 June 1948 – 70 years ago today – symbolises the beginning of large-scale Caribbean immigration to Britain. It is forgotten, however, that roughly one third of the Windrush’s 492 passengers were RAF airmen returning from leave or veterans re-joining the Service.

Corporal Baron Baker, a Jamaican who had stayed in Britain after the war, greeted the ship on behalf of the Colonial Office. The former RAF Policeman would later write:

“Many of those on the Windrush were ex-servicemen, and there was an immediate understanding between us. There was a greater feeling of togetherness than I have seen in any group I have come across.”

Baker organised temporary accommodation for the newcomers in a disused air raid shelter in Clapham Common. The shelter was close to Brixton, and a number of the West Indians went there to find lodgings; thereby helping to establish the multi-racial community we know today.

Corporals Harold Sinson and Sam King were on board the Windrush that day. Reflecting on the value of his Service career Corporal King remembered that:

Another Windrush passenger was Flight Lieutenant Vidal Dezonie who would enjoy a long career in the RAF. He wrote:

“I’ve not experienced racism in the same way as many other West Indians who came over in 1948 or the 1950s. In my experience the RAF is colour blind and free from racism.”

Vidal’s son André, became a Harrier pilot in the 1980s and was promoted to Group Captain.

While the Black airmen were fortunate to be returning to a Service that valued their skills and treated them with respect, their civilian counterparts faced a cold and often hostile reception. Discrimination in housing and employment, coupled with routine verbal and physical abuse, was endured by many Black people living in the poorest parts of Britain’s cities. 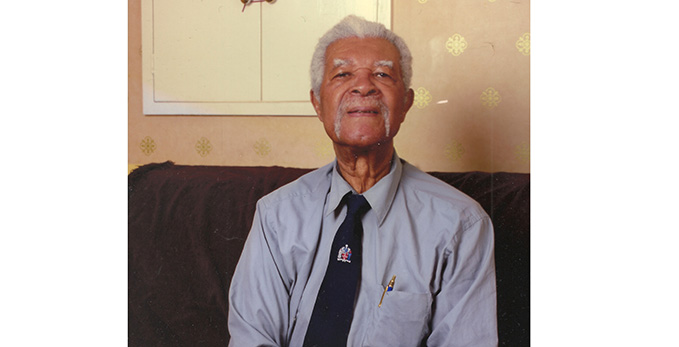 “Those seven years I spent in the RAF were to change my life.”

In 1963, Stephenson skilfully organised a peaceful boycott that broke the Bristol Omnibus Company’s ‘colour bar’ and opened the way for Black bus crews. Another airman was Jamaican Val McCalla, who in 1982 launched ‘The Voice’; the Black newspaper famous for its forthright campaigning style.

There are many other stories, and it is clear that the foundations of Britain’s Black community were laid in part by proud RAF veterans.

If you have enjoyed reading this blog and would like to learn more about Caribbean Servicemen and women in the RAF we have an online exhibition ‘Pilots of the Caribbean‘ and a series of YouTube films for you to view.