The Evolution of the Nieuport Fighter

The Jack Bruce Collection includes over 600 images of Nieuport aircraft. While conducting research on this famous company, an idea for a blog emerged, detailing the many differences, both major and minor, which distinguish the famous Nieuport fighters of 1914 – 1918.

The Nieuport design team was led by Gustave Delage from January 1914 and, under his direction, produced the long line of Nieuports described in this blog. The chief characteristic of his designs, until the Type 28, was the sesquiplane, or one and a half wing, layout, which afforded a fine downward view at the expense of the aircraft’s structural strength.

The lower wing was built around a single spar while the interplane struts terminated in a single point, dispensing with the strength resulting from a box-structure, one of the conventional biplane’s principal assets. The two-seat Nieuport 10 of 1914 was originally intended to have a variable incidence lower wing, acting around a sleeve located on a part of the lower spar that was circular in section. The variable incidence concept was abandoned after the Type 10 but the circular section joint remained, compromising the structure’s torsional rigidity. Violent manoeuvres or age could lead to the lower wing weakening, particularly at the root or at the spar to interplane strut junction, resulting in a catastrophic in-flight structural failure.

As is well-known, the Albatros “vee-strutters”, using a Nieuport-inspired sesquiplane layout, suffered from a similar structural weakness.

Delage designed this diminutive aircraft in 1915 and it was quickly ordered into production for the French Air Force. It entered service in time to see combat during the Battle of Verdun and, with the Royal Flying Corps’ Airco D.H.2 and Royal Aircraft Factory F.E.2b, was instrumental in ending the air supremacy previously enjoyed by the Fokker E-series.

The aircraft can be readily distinguished from later Nieuports by the absence of a headrest. The flying wires converge from the wings to the fuselage. 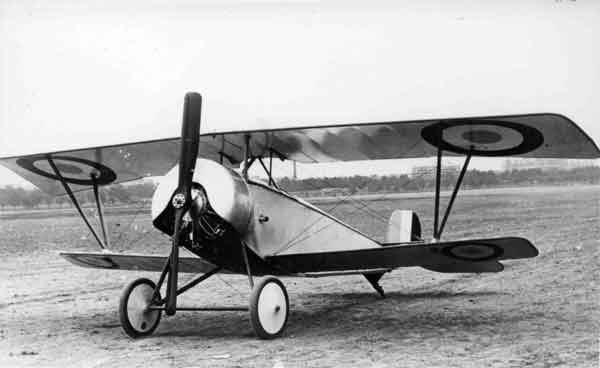 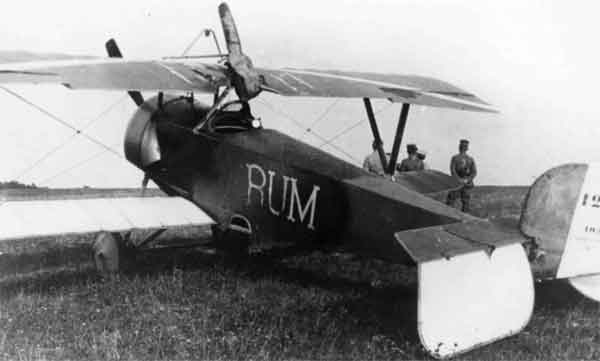 As 1916 progressed, pilots began to discover that the bébé was inferior in speed and climb in comparison to enemy aircraft. The obvious solution was more power and a 110hp Le Rhone engine was fitted in place of the 80hp version in the Type 11. However, although performance was marginally increased, the Type 16 was disliked by many pilots due to the effect of the heavier engine on the aircraft’s balance.

The Type 16 can often be distinguished from its predecessor by the presence of a headrest. 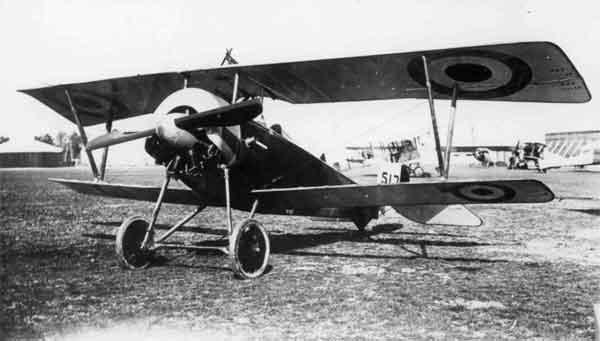 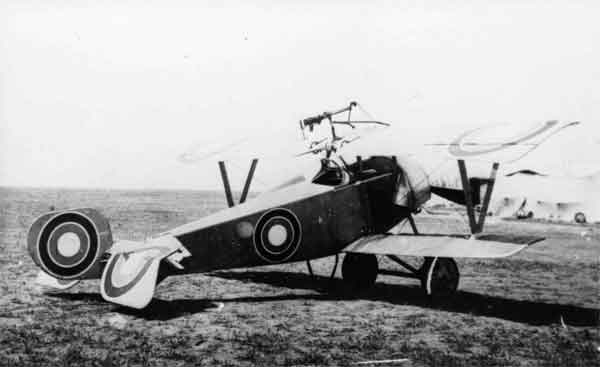 Perhaps the most significant Nieuport type, the Type 17 was introduced into French service in late 1916. To resolve the defects of the Type 16, Delage lengthened the fuselage, increased the wing area, and changed the shape of the upper wing ailerons. The Type 17 was very successful, serving with the air forces of France, Britain, Belgium, Italy and Russia. However, the Albatros D.III and D.V were superior in most respects and the Type 17 was gradually withdrawn from combat service during 1917.
The Nieuport 17 featured a larger engine cowling and, as noted above, increased wing area. 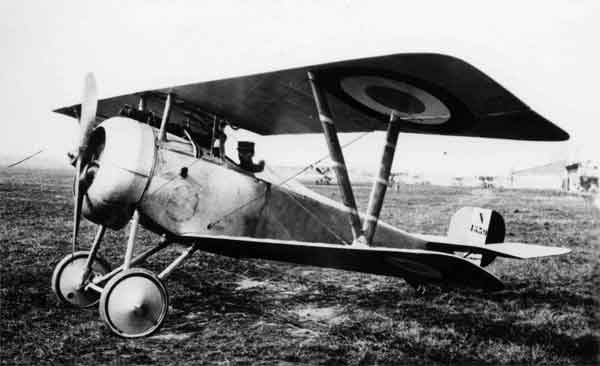 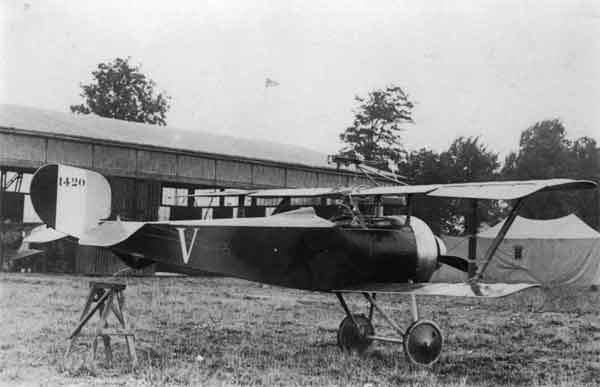 This development of the Type 17 was a temporary measure, featuring refinements which provided a marginal increase in performance.

The Type 17bis featured a circular-section fuselage, a Clerget engine and a narrow chord engine cowling. 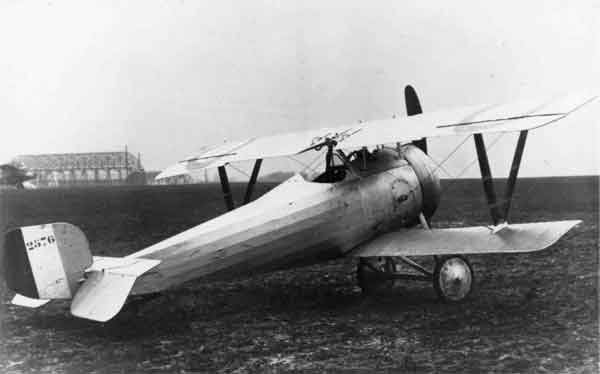 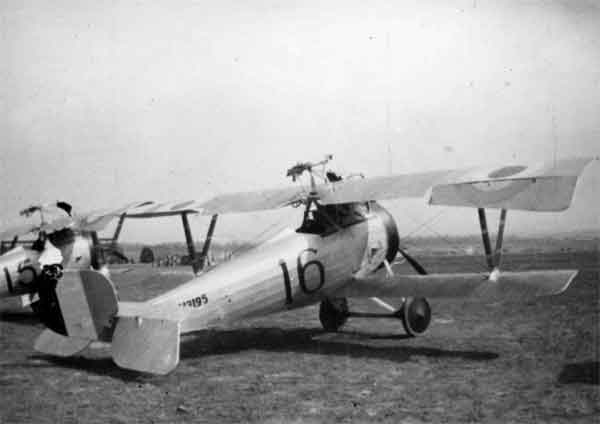 This aircraft was something of a hybrid, featuring the fuselage of the bébé and the wings of the Type 17. The aircraft was produced in small numbers and, as such, was comparatively rare. Most were issued to training units although a few did enter combat service, notably with the famous Escadrille N124 (later the Escadrille Lafayette).

The Type 21 was superficially similar to the Type 11 but can easily be distinguished from the latter by the use of parallel flying wires. 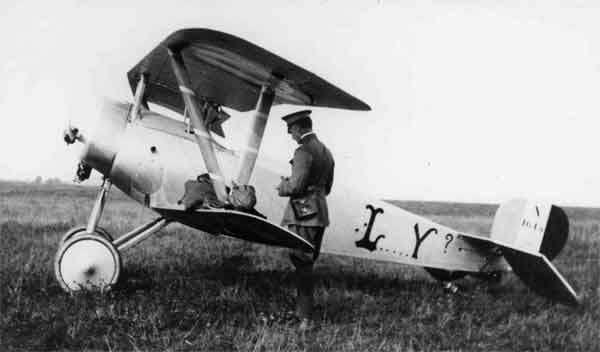 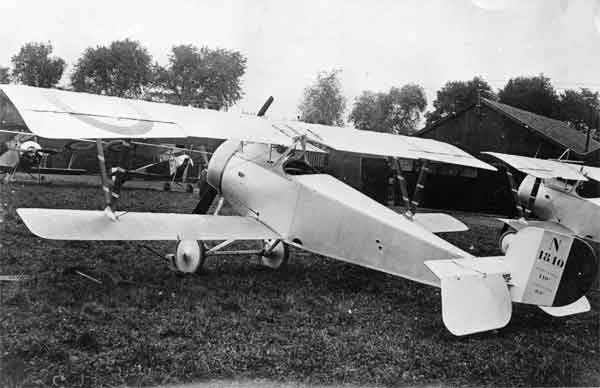 This aircraft was another development of the Type 17 and was virtually identical in appearance.
In French service, the Type 23 featured an offset Vickers gun, distinguishing it from the Type 17. In British service, both the Type 17 and Type 23 were equipped with an over-wing Lewis gun. A change to the structure of the Type 23’s upper wing necessitated a revision to the fitting of the Lewis gun mounting plate. This small difference, in the absence of a visible serial number, is the only visual clue. 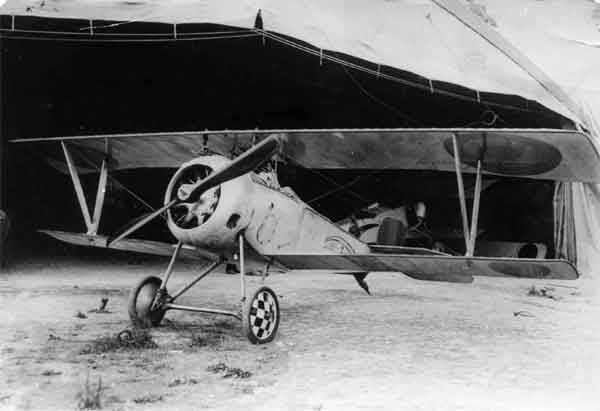 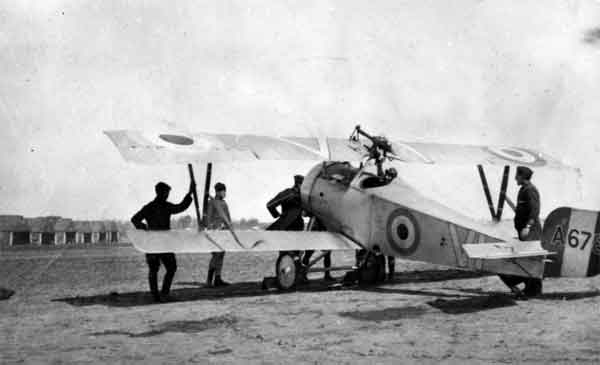 This very rare sub-type was only used by British units. The aircraft featured a circular-section fuselage and was similar in appearance to the Nieuport 17bis.
The key features which distinguished the Type 23bis from the Type 17bis were the front centre section, or cabane, struts, which were angled forwards, due to a revised wing structure. The carburettor intake pipes were located above the thrust line on both sides. 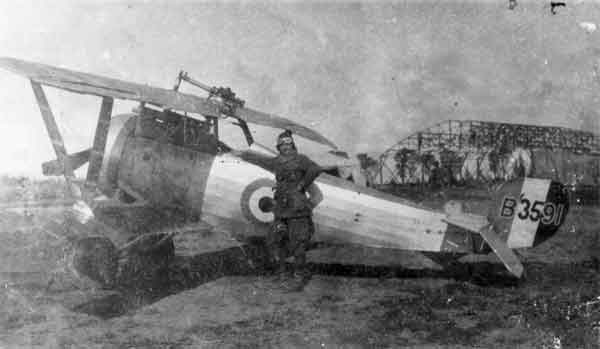 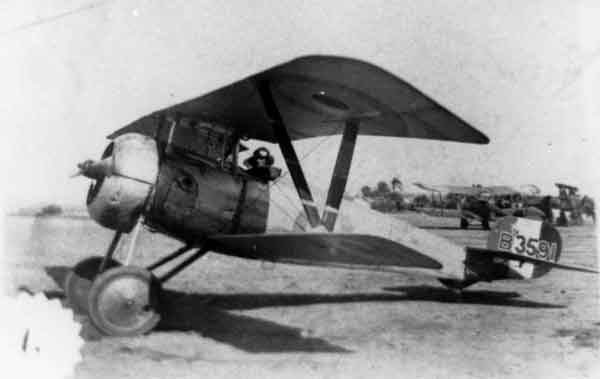 The Nieuports 17 and 23 began to be superseded by the SPAD VII in 1917. Both lacked the performance of the SPAD and were more difficult to fly. In an attempt to prolong the competitiveness of the sesquiplane design, Nieuport produced the Type 24.

The aircraft featured a 130hp Le Rhone engine, a circular-section fuselage, a new aerofoil section to improve lift and, in a departure from previous Nieuport practice, an elegantly-shaped, plywood-covered tail unit.

The aircraft entered service after the Type 24bis and was withdrawn by early 1918. 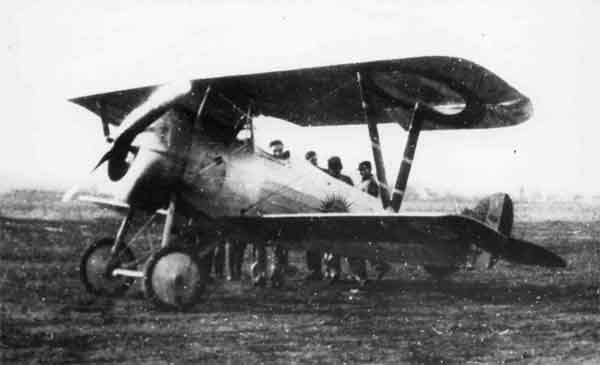 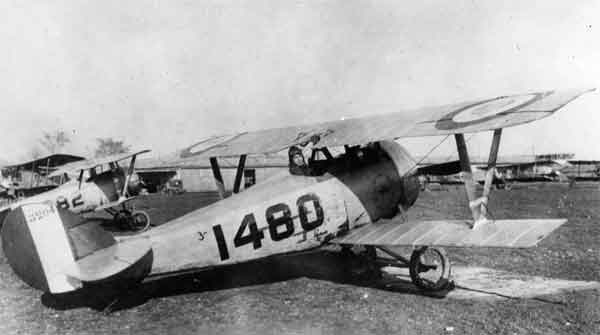 Before the Type 24 entered production, Nieuport tested one of the latter with the tail unit of a Type 17. Although preceding the Type 24, this version was labelled the Type 24bis. It was manufactured in small numbers and entered service in early 1917.

The aircraft was externally similar to the Nieuport 17bis. Notable differences included the 130hp Le Rhone engine and the revised aerofoil section of the Type 24. 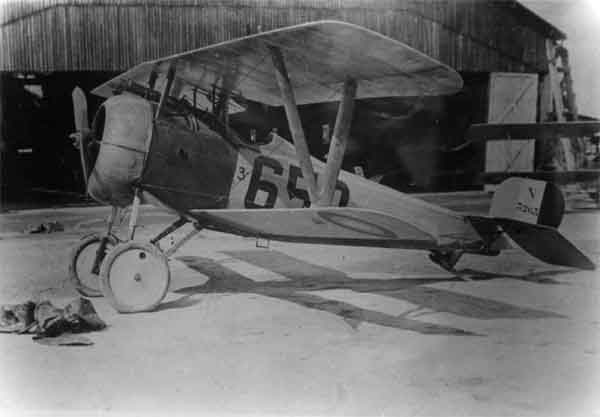 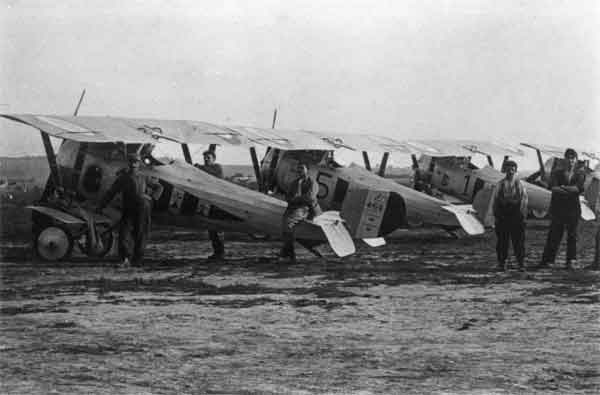 It is possible that the Nieuport 25 used by Charles Nungesser was the only one of its kind to be built. As with the Type 24, it was an attempt to extend the life of the sesquiplane design.

The Type 25 was externally similar to the Type 24: the main feature of distinction being the fairing of the undercarriage legs.

The Type 27 represented the final attempt to improve upon a basic design which had stood Nieuport in good stead since 1915. The Type 27 followed the Type 24 on the production line at Issy-les-Moulineaux and was supplied to the remaining Nieuport Escadrilles in 1918 in lieu of the SPAD XIII.

Like the Type 25, the Nieuport 27 was externally very similar to the Type 24. Small revisions to the Type 24’s design were a divided axle undercarriage and an internally-mounted tailskid. The ailerons of the Type 27 featured curved trailing edges, a departure from the straight-edged versions of earlier models. 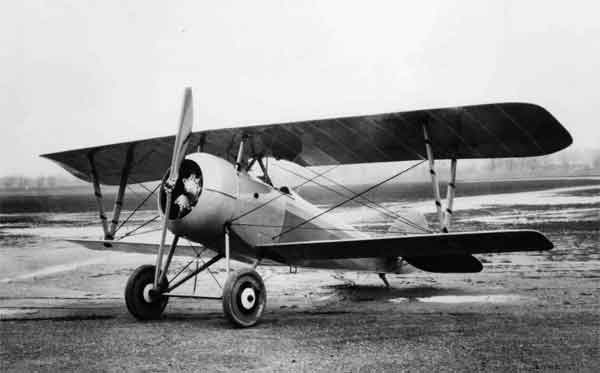 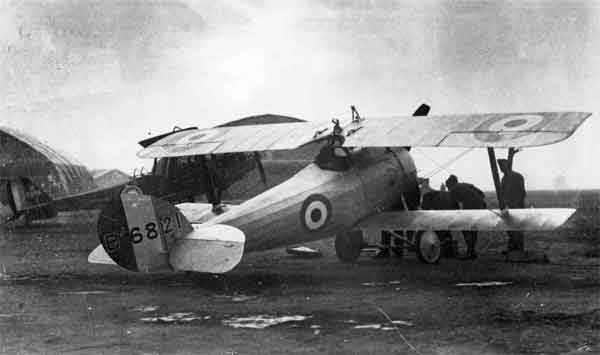 In response to the dominance of the SPADs VII and XIII, Gustave Delage abandoned the sesquiplane layout and designed a new fighter, the Type 28. A more powerful, 160hp Gnome-Monosoupape engine and an increased wing area were intended to solve the traditional respective Nieuport shortcomings of a low top speed and a poor rate of climb. The weakness of the sesquiplane would be addressed by providing a double-spar lower wing and parallel interplane struts.

In the event, these solutions were only partially successful. The aircraft did not meet with approval when tested, mainly due to the continued weakness of the wings and it was not selected for French Air Force service. However, due to continuing problems with SPAD XIII production, a reprieve for the design came with a demand to equip the new American Pursuit squadrons, then in the process of formation.

The aircraft eventually entered service with the USAAS in 1918 but, although graceful in appearance, it was not popular; structural problems during high-g manoeuvres continued and performance was markedly inferior to that of the superb Fokker D.VII. 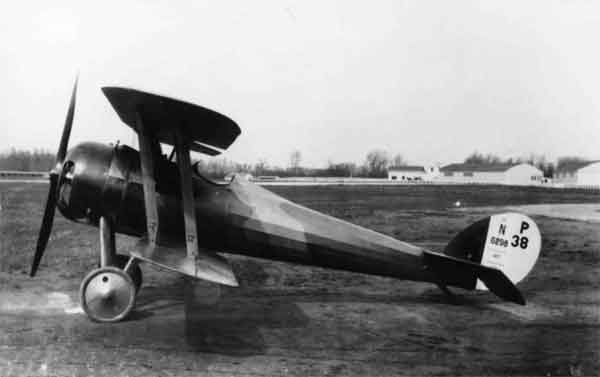 The Nieuports became an important part of the Allied Air Forces and in particular to the French Air Force and the RFC and RNAS, due to their sparkling performance in 1915 and 1916. The availability of the Types 11 and 17 for the RFC and RNAS was especially well-received, as the UK was struggling to supply competitive fighter designs in sufficient numbers.

However, the pace of change was such that it was not long before it began to be outclassed by rival designs, both Allied and German and, while a series of incremental revisions was made, by mid-1918 the basic design, as shown by the Type 28, had become obsolete.

The Nieuport 29 made use of a monocoque fuselage, conventional interplane struts and a 300hp Hispano-Suiza V8 engine, which endowed it with a superlative performance. It entered service too late to see action in the First World War but became the standard fighter of the French Air Force during the 1920s.

Gustave Delage left the company in 1933 and joined the instruments and watch makers Jaeger. He died in 1946.