The Hercules in the Falklands War

10 May 2022 By Kris Hendrix: Researcher in Aviation Historian

In the #Falklands40 commemorations, the Lockheed Hercules may not receive the attention of the Harriers and Vulcans of this world, but it played an essential role during the conflict.

As has been explained in previous posts, Ascension Island was the vital staging post for the recapture of the Falklands, located strategically between the UK and the Falklands. From here the Vulcan and Victors launched their Black Buck raids while the remaining (Sea) Harriers were loaded on ships steaming toward the Falklands. However, how to get supplies to Ascension Island? Or how could the Fleet be supplied while in the South Atlantic? This is where ‘the Herc’ came in.

The Hercules entered service with the US Air Force in 1956 as a heavy tactical transport aircraft powered by then-novel turboprop engines. Ever since, the Hercules and its many enlarged and improved versions have been a mainstay of Western logistics. During the Falklands, the RAF had a total of 54 Hercules transports, which operated together at RAF Lyneham, and therefore referred to as the Lyneham Wing.

The Hercules was the first RAF aircraft to jump to action in the Falklands War. One day after the invasion, four Hercules departed Lyneham for Gibraltar to set up an air bridge via Dakar in Senegal to Ascension Island. Goods and personnel were flown to the Island to ready it for air operations.

Another valuable mission performed by the Hercules fleet was that of air drops to the Task Force ships sailing toward the Falklands. Once the Task Force sailed south from Ascension Island, the only way of delivering urgent/vital supplies would be through Hercules flying down to it and dropping them by parachute into the sea, having provided sufficient flotation packaging to permit the stores to float until picked up by the ships.

The air drop technique always worked very well but there was one peculiar incident when the small boat sent to drag the large load alongside a destroyer for pick up, took over three hours to do the job. A killer whale had fallen in love with what the Herc had dropped. It chased off the naval boat every time it tried to get near it. It eventually took the destroyer itself to chase off the amorous orca and recover the load. 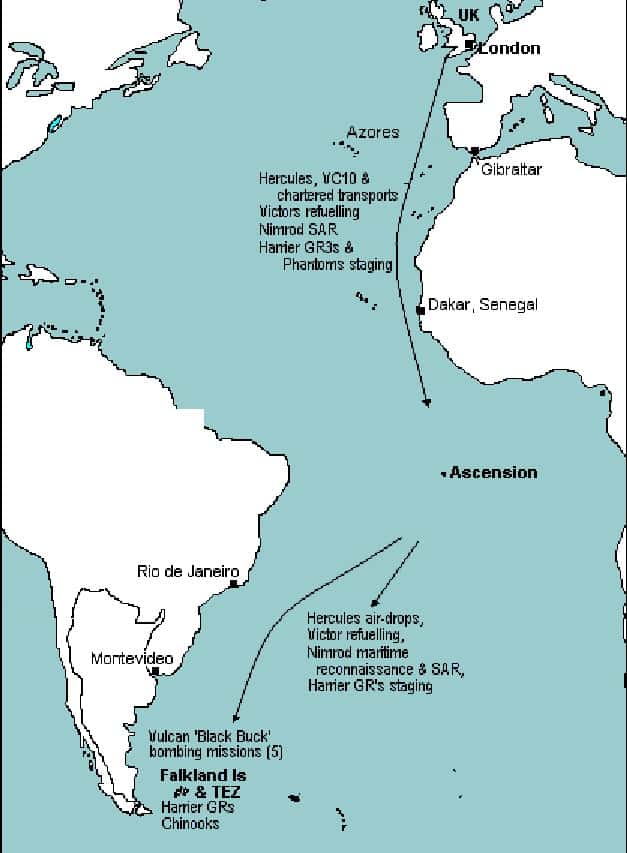 A more serious problem was the limited endurance of the Hercules. Remember, Ascension Island was 4,000 miles away from the UK, and it was another 3,500 miles to the Falklands. Both were beyond the range of the Herc, even without cargo. A solution was literally found. Discarded fuel tanks, once used by retired Andover and Argosy transport aircraft, were located in storage. These 825-gallon tanks were hastily installed in some Hercules aircraft, greatly increasing their range. The first extended-range Hercules deployment was on 4 May. Hercules XV196 took off from Lyneham and flew non-stop to Ascension Island. A few days later it dropped supplies over the Task Force and returned, staying in the air for over 17 hours.

Still not satisfied with the range, the RAF investigated adding an in-air refuelling probe to the Hercules. Hercules XV200 was chosen for the conversion. A probe was mounted on top of the cockpit with the equipment faired over from the fuselage roof to the starboard wing root. A Handley Page Victor tanker was flown over to test the mid-air refuelling. However, there was one obvious problem. The Vulcan’s minimum flight was higher than the Hercules’ maximum flight!

In the end a technique was developed which involved fuel being transferred in a gentle dive starting at about 20,000 feet. That way, the Victor could manage to keep down to 230 knots (265 mph) and (thanks to Isaac Newton) the Herc could bump up its normal 210 knots (242 mph) to match this. This procedure meant a prolonged descent at 500 feet per minute, the exercise usually being completed about 5,000 feet above the ocean, before commencing the long haul back up to altitude. That said, depending on the conditions, it could be a lot lower…

Six Hercules were converted before the end of the Falklands conflict. The first operational sortie with XV200 took place on 16 May. Flt Lt HC Burgoyne and his crew took off from Ascension for a 6,300-miles journey to the Task Fleet off the Falklands, and back.

The Hercules was refuelled twice by tanker aircraft; the second tanker having to be refuelled itself on the way back. Once down to about 1000 feet the Hercules depressurised, opened its ramp, and dropped 1,000 lb of supplies and eight parachutists near HSM Antelope off the Falklands. Burgoyne’s team then closed the ramp, re-pressurised, and climbed back up to cruising altitude before making a rendezvous with its third tanker halfway home. Burgoyne received the Air Force Cross for what was probably the longest air transport mission in history.

By 6 June the first two such equipped Hercules had carried out 11 missions, supporting the Task Fleet off the Falklands, each lasting at least 20 hours. The crews were prescribed the non-addictive drug Temazepam to ensure that they got some proper rest between flights. Without exception each crew member was absolutely drained, but determined and confident in their ability to undertake the task.

Every mission was given a girl’s name, such as Julie, Katie, Mary and Wilma. A drop on the islands itself, codenamed Gina, was planned for 14 June but the Argentinian forces surrendered while the Hercules was still en route.

That did not end the role of the Hercules, quite the opposite. Using the captured Port Stanley airport, the Hercules were used to supply the British armed forces on the Islands. This came to a temporary halt on 14 August to allow extension and repair work to the air strip. Sorties reverted back to airdrops.

To pick up mail from the Islands an air snatch system was devised, similar to the practices of the RAF over the desert in the 1920s and 1930s. A grappling hook was attached to a 150ft nylon rope, trailing from the rear cargo door of the Hercules. The hook would engage a loop of rope suspended between two 22 ft poles positioned 50ft apart. The aircraft would run in at 50ft to snatch the rope and haul in the attached mail bag. Some 30 such snatches were carried out before RAF Stanley was reopened on 29 August.

In hindsight, the Hercules air bridge delivered essential support to the British war effort. In fact, the airlift turned out to be the biggest since the Berlin Airlift of 1948-49. The Hercules carried over 7000 tons, or 15 million pounds, of freight, including 114 vehicles, twenty-two helicopters and nearly 6000 troops and support personnel.

Both our London and Midlands site have a Hercules on display. Our London site has a front section of an American WC-130E while our Midlands site has an RAF C-130K Mk 3 on display. Book your free ticket at the bottom of our website to see them up close. And if you wish to find out more about the history of the Hercules in the RAF, have a look at this video on our YouTube channel: