The Lancaster enters the fray

It was on the night of 3/4 March 1942 that the Avro Lancaster conducted its first operational sortie. No. 44 (Rhodesia) Squadron took their brand-new Lancasters on a mine laying mission of Heligoland Bight. Mine laying is an often-overlooked task of Bomber Command and yet it was an important one. The Allies succeeded in stopping the free navigation of German shipping, prompting the Nazis to commit great resources to clear the sea lanes.

No. 44 Squadron was the first squadron to be equipped with the new Avro Lancaster. During the First World War it had been a celebrated night fighter squadron commanded by Arthur ‘Bomber’ Harris. He would go on to lead Bomber Command in its great offensive against Germany during the Second World War. In terms of casualties, the Squadron suffered the third highest number of any squadron of the RAF during the war.

The Lancaster would perform is first operational bombing mission on 17 April, when Squadron Leader JD Nettleton led six of twelve bombers from No. 44 and No. 97 Squadrons – six aircraft from each – in a daylight raid on Augsburg in Germany. The Lancasters involved in the raid flew at tree-top level to attack the MAN Diesel engine factory, but the loss of aircraft was great. Only five out of the twelve returned. Nettleton was the only one of No. 44 Squadron which returned, and was awarded the Victoria Cross. 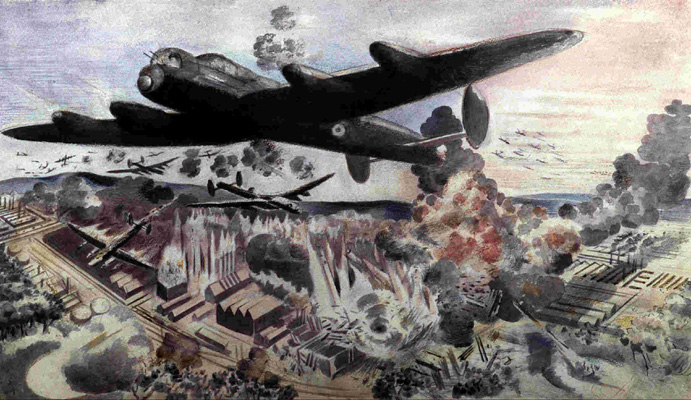 Despite the bravery of its crew, it showed that even the Lancaster could not survive over Germany during daylight. With its maximum speed of 282 mph and armament of only light calibre machine guns it was too vulnerable against Germany’s Messerschmitt Me 109 interceptors. As a result, most Lancaster sorties took place at night, targeting German cities and industry. Paradoxically, its most famous of all missions was one which targeted hydro-electric dams of the Ruhr valley. Guy Gibson’s No. 617 Squadron, known as the ‘Dambusters’, carried the ‘bouncing bomb’ (though in reality a mine), designed by Barnes Wallis. This Squadron has been known as the Dambusters ever since.

Few people realise the original design was called the Manchester. Avro’s chief design engineer, Roy Chadwick, decided to swap the two heavy Vulture engines with four lighter Merlin engines, the same that powered the Supermarine Spitfire. As much as the twin-engined Manchester design was a failure, the Lancaster was an instant success. 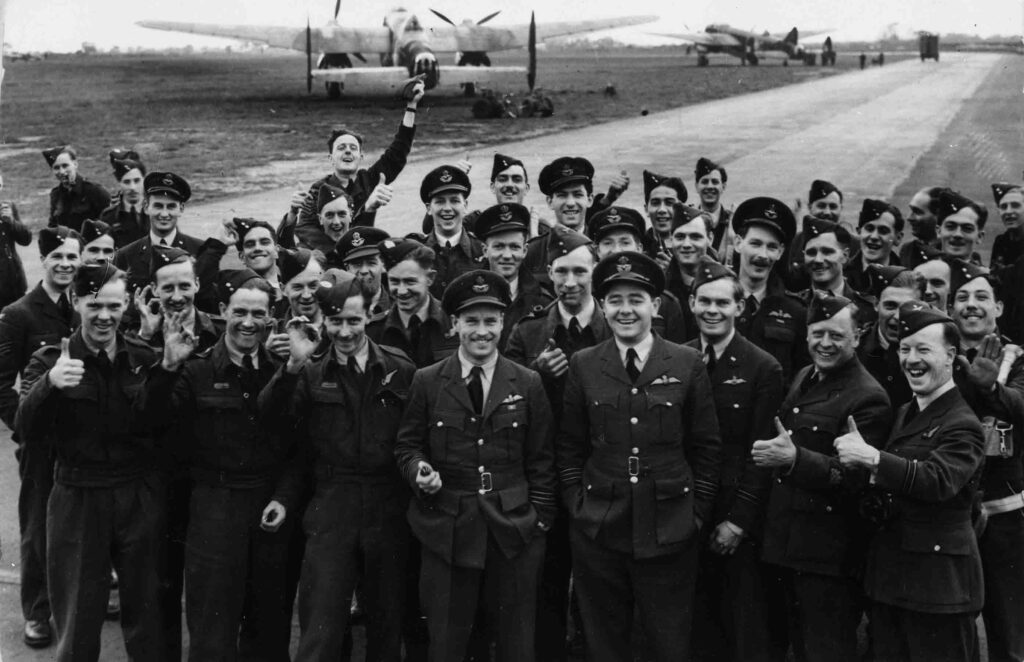 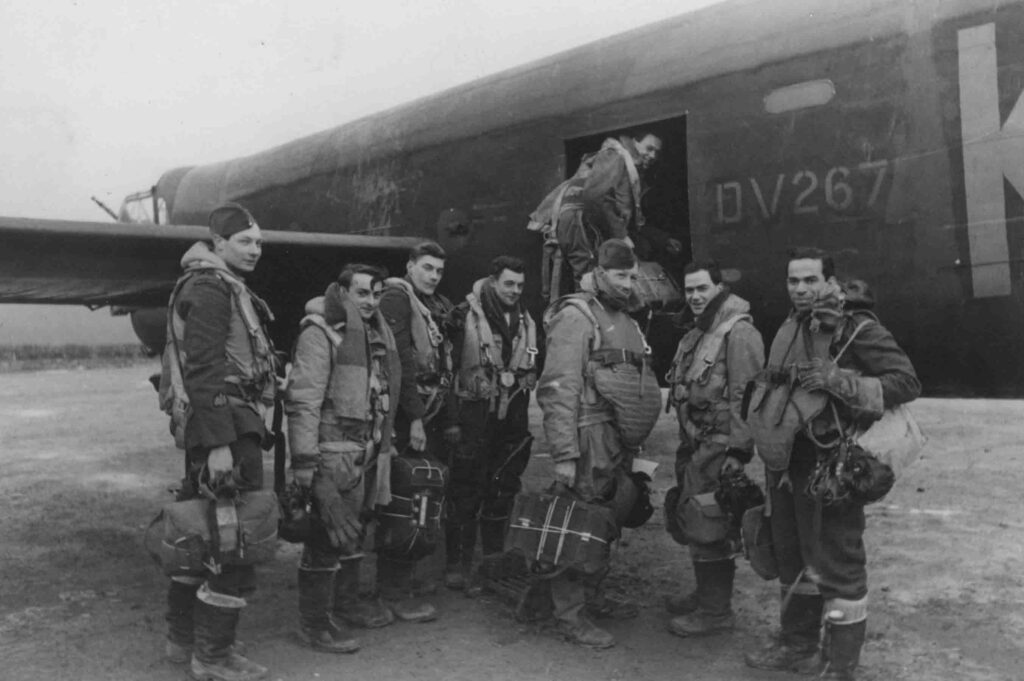 A long unobstructed bomb bay meant that the Lancaster could take larger bombs than other bombers, such as the 4,000 lb ‘cookie’ or the heavier ‘Blockbuster’ bombs. The biggest bomb carried was the 22,000 lb Grand Slam ‘earthquake bomb’ even though it meant removing a turret to save weight. It was the heaviest bomb dropped during the war, even bigger than the American nuclear bombs.

7,377 Lancasters were produced for the RAF and its Allies, delivering 608,612 tons of bombs in 156,000 sorties. Together with its lesser-known lookalike, the Handley Page Halifax, they formed the core of Bomber Command during most of the Second World War. The bomber was loved by its crews, who appreciated the reliability of the Lancaster, its ability to take damage and bring them home. It could also fly higher and faster than other British heavy bombers at the time.

One former pilot is Benny Goodman. In the last months of the war, he flew Lancs on daylight missions, participating in the raid that finally sank the Tirpitz battleship, and attacked Hitler’s mountain residence at Berchtesgaden. He explained to us why it was his favourite: ‘it was wonderful to fly and it would do anything you wanted from it’. He described how the Lanc would veer up as soon as the 22,000 lb Grand Slam bomb was released. The always modest Benny recently celebrated his 100th birthday.

Benny is a very humble veteran and doesn’t consider what he did exceptional. He recalls the many young men who were not that lucky. Almost half all Lancasters delivered during the war were lost on operations with the loss of over 21,000 crew members. The disadvantage of having such a large bomb bay was that there was no room for a gun turret underneath. This meant that the Lanc crews were blind from attack from below. The Germans took full advantage of this by installing upward firing guns in their night fighters. If the crew needed to abandon a struck Lancaster, the escape hatch in the nose of the Lancaster revealed a peculiar design flaw: it was too narrow. Only 15 % of the Lancaster crew were able to bail out… 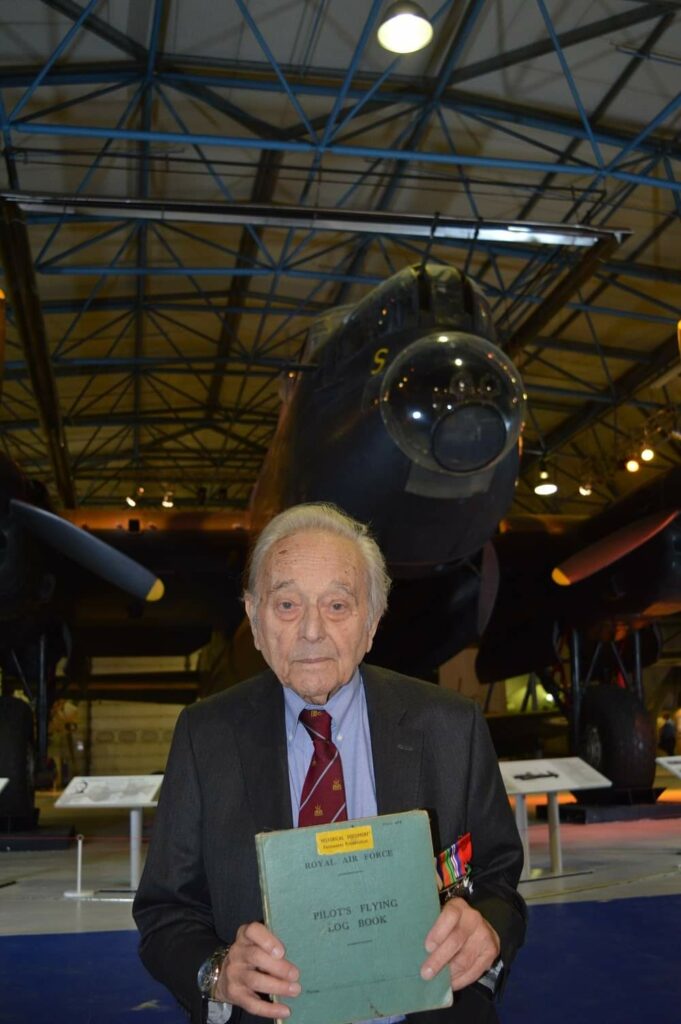 One of the most lucky Lancasters is the one on display at the RAF Museum London. S-for-Sugar flew an astounding 137 missions. The average was 20! Although we have dozens of historic aircraft, the Lancaster is probably the one which impresses most. Not only does it look powerful and majestic, the Lancaster is THE symbol of Bomber Command, but it has become more than that. It has become an iconic and defining figure of the Second World War, as much as the Spitfire, or Winston Churchill.

Also our Cosford site has its own Lancaster, albeit a post-war variant. One of the limitations of the Lancaster was its inability to fly at higher (and thus safer) altitudes. The Lincoln was powered by four two-stage Merlin engines, featured an increased wingspan and lengthened fuselage and new Boulton Paul F turret with two 0.5in Browning machine guns.

To commemorate the 80 years since the first flight of the Lancaster, the RAF Museum is launching – today! – its Lancaster Challenge. Choose to complete 80K, 150K or 500K. You can run, walk, cycle or walk the dog to complete your Challenge. This Challenge is virtual which means you can participate and complete it from anywhere in the world. By entering the Lancaster Challenge, you are supporting the RAF Museum Charity and enabling us to share the stories of the crews who showed incredible bravery flying missions for Bomber Command. 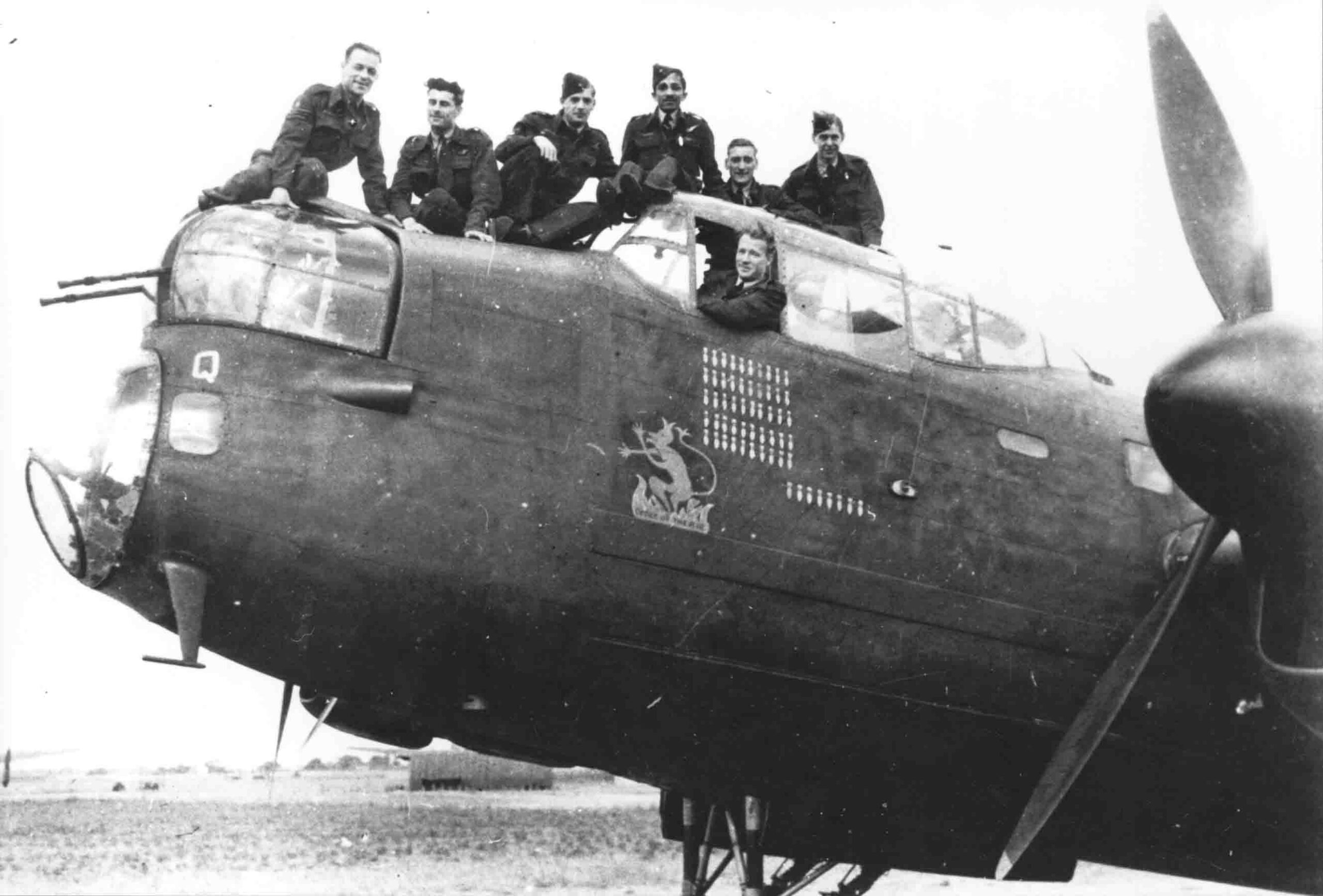 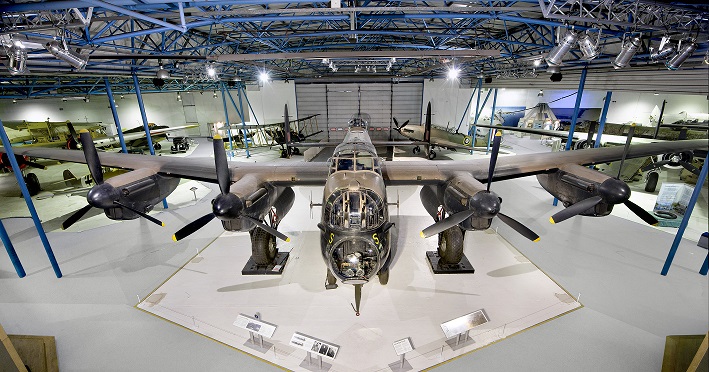 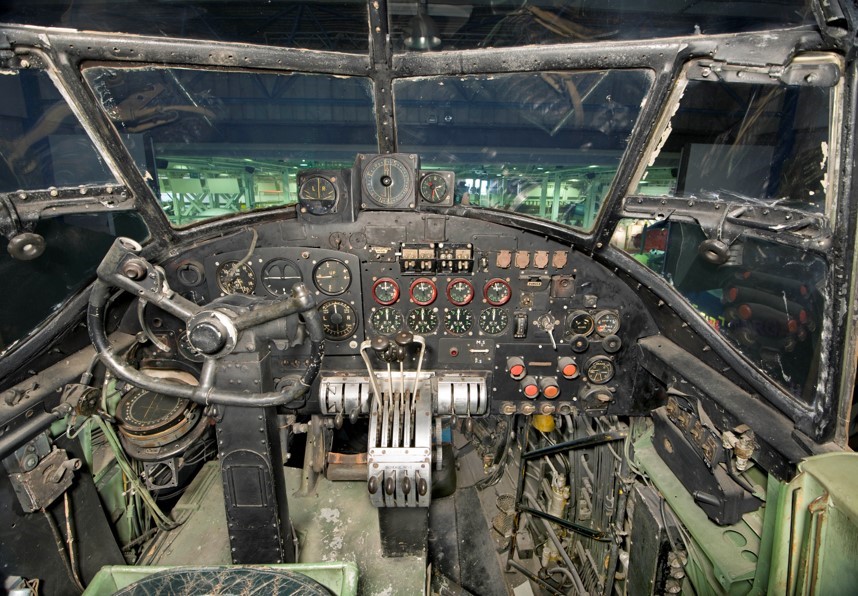 100-year young Benny Goodman has your support. The Challenge is now open!