Last week saw the introduction of the new immersive Dambusters Virtual Reality Experience at the RAF Museum London. For the first time ever, visitors to the Museum can step inside the story of this legendary raid through an authentic, interactive recreation of the Dambusters’ first mission on 16 May 1943 attacking the Möhne Dam. 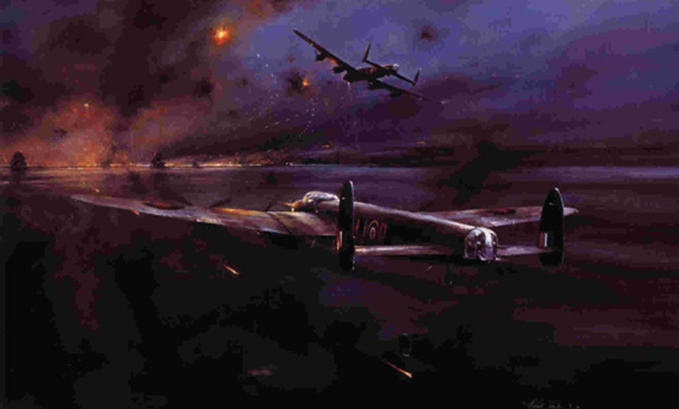 Participants suit up in a vest and step inside an accurate physical set of a Lancaster. They are completely immersed and able to reach out to feel the window, fuselage and equipment of the Lancaster bomber. As the aircraft continues its mission, users will also feel the ‘roar of the Lancaster’s Merlin engines’, through their haptic vests. 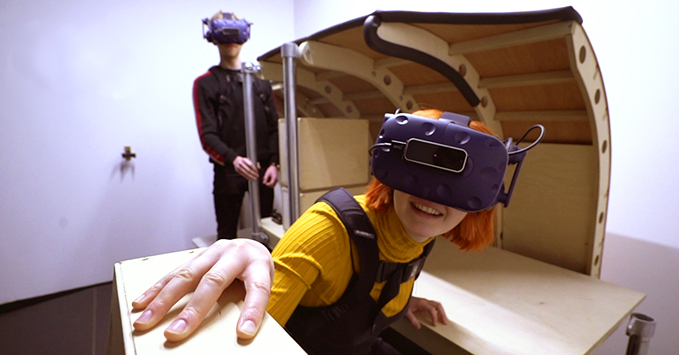 They have complete 360° first person views and spatialised audio enabling them to see and hear everything happening outside and inside Lancaster G-George: the actions and conversations of the other crew members, reacting to the events happening outside, such as the crash of Hopgood’s Lancaster, the tracer fire streaking toward the bombers and ultimately, the breach of the massive Ruhr dam. Flying at merely 60 feet altitude the trees and dam parapet whoosh past at a speed of 232 miles per hour. 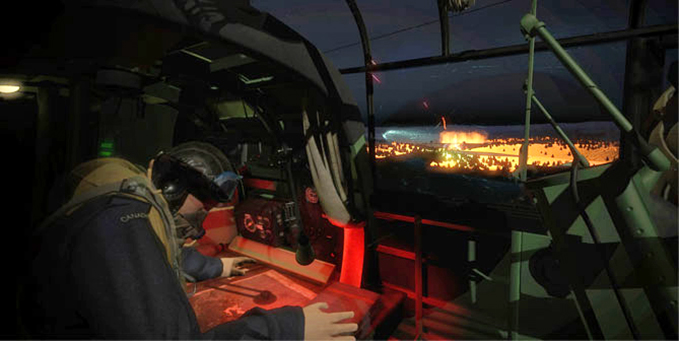 Yet, this is not a thrill-seeking ride, this is a historically accurate document, created by All Seeing Eye with input from No. 617 Squadron official historian, Robert Owen. Its level of accuracy is astounding and relies on actual memoirs of the crew members. We know who they were, when they were born, their ranks, their roles and ultimately how all seven died before the war was won…

The six men were personally chosen by Wing Commander Guy Gibson after he was asked to form and take control of a new squadron, originally called Squadron X, without being told what the mission was until much later. The other aircrew were not told their mission until the day before the raid. They spent weeks flying at low altitude cross-country and over water, preparing for that what they did not know.

One person who did know was Barnes Wallis, the famous engineer who had previously designed the geodetic structure of the Vickers Wellington bomber, another iconic aircraft of Bomber Command. He had come up with a solution to breach the German dams over the Ruhr valley. These dams provided hydroelectric power to the armaments industry nearby. It was believed that taking out these dams would result in a drop in Nazi war production. However, the dams were massive constructions, impossible to destroy by ordinary bombs.

Torpedoes and sea mines create shockwaves through the water, which rupture the hulls of ships. It was thought that such a weapon would do the trick. The Germans were also aware of this and they had placed torpedo nets inside the water. It was Barnes Wallis who came up with the idea to create a spherical bomb, which would bounce over the surface like a skipping stone, before sinking directly in front of the dam and explode. Through several live tests throughout the country, from Dorset to Wales and from Essex to Lincolnshire, he meticulously calculated the exact speed, altitude and distance which were required. Any deviation from this would result in failure. 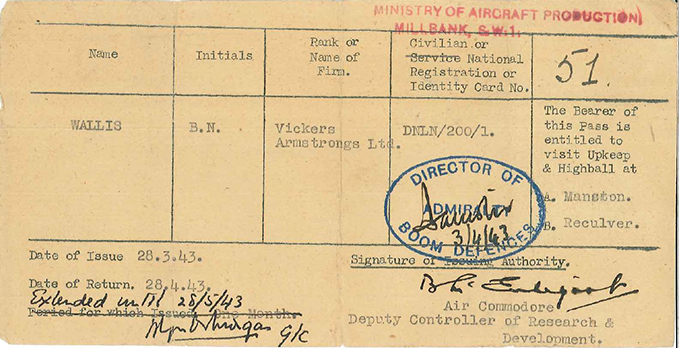 It was clear the crew for the Lancaster, the only bomber capable of carrying this 9,250 pound mine, had to be the very best. They flew night after night in specially modified Lancasters. As the mine was too big to be carried internally, the bomb bay doors were removed and UPKEEP, as the bouncing bomb was officially called, was suspended underneath the fuselage. To save weight the mid-upper gun turret was removed with the air gunner moving to the front turret of the aircraft, a position normally taken over by the bomb aimer underneath. Another addition was downward facing searchlights which would provide the crew with the correct altitude indication, a mere 60 feet above the water.

19 Lancasters took off from RAF Scampton with Gibson’s G-George leading the attack. His bomb did not breach the dam and it probably took until the fifth Lancaster before ‘she went’. Throughout, Gibson kept flying over the target, drawing away anti-aircraft fire for the others. Visitors can witness the entire scene in the Virtual Reality Experience from two positions inside the aircraft: those of wireless operator Harlo ‘Terry’ Taerum and navigator Robert ‘Hutch’ Hutchison. These men made it back to RAF Scampton, but died only four months later in another sortie.

The outcome of the mission was a success: two out of the three dams were breached, severely disrupting the German energy supply. It also caused massive flooding in the area with the tragic death of hundreds of civilians, including Ukrainian slave labourers and Western prisoners of war. However, the Nazi authorities deviated the energy supply and, through a Herculean effort, the dams were repaired after weeks, instead of the predicted months. This takes nothing away from the accomplishment of the RAF bomber crews on that night in May 1943. They displayed an extraordinary level of professionalism and courage in an awe-inspiring raid, from which eight aircraft and 53 out of 133 ‘bomber boys’ did not return. 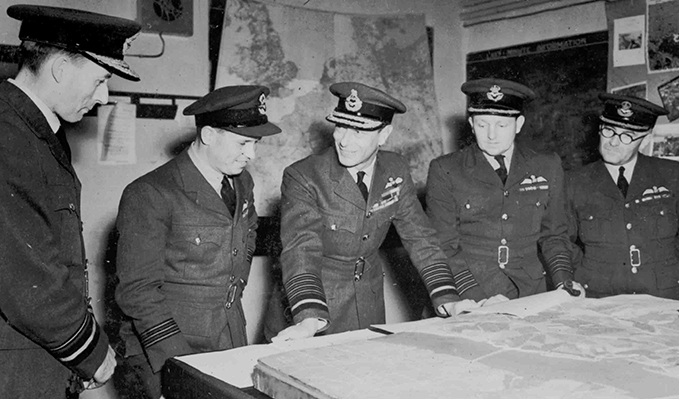 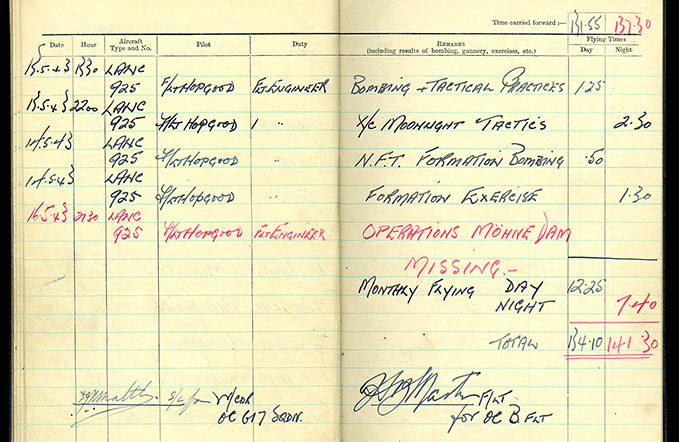 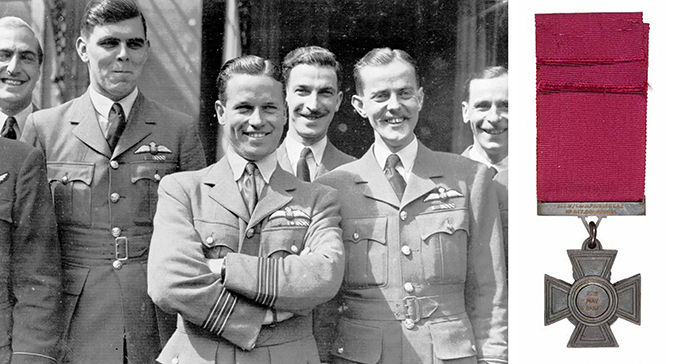 The RAF Museum is proud to be able to present this new experience to its audience as it brings a new perspective to the existing exhibition of the Dambuster raid which holds a replica of UPKEEP, better known as the ‘bouncing bomb’. Also on display is the actual office of Barnes Wallis, the designer of the bomb. We have added informative panels concerning the raid, the bouncing bomb and the crew members. Last but not least, an actual Lancaster stands proudly nearby, in Hangar 5.

The Dambusters Virtual Reality Experience is now open for the public daily from 10.30am to 4.45pm. The full length of the experience is 10 minutes with only 2 people taking the experience at the same time. The cost is £10 per person. Please book your ticket and step on board of the legendary Lancaster G-George as it undertakes its historic mission.