The RAF and the Wolverhampton connection

The RAF Museum Midlands tells the story of the RAF through its collection and the stories of the people who served in the RAF. But the RAF Museum Midlands is more than that. Located in the West Midlands it also tells the story of the RAF in this part of the UK. During the Second World War, several local people served within the RAF and several aircraft were purchased and donated to the RAF by the people of Wolverhampton. Such aircraft were given the name of their donors.

The idea behind the naming of aircraft in exchange for public donation began in the United Kingdom during the First World War, when the government encouraged donations as a public relations exercise. Donations were not raised for any particular aircraft, but a scale was produced to indicate to the public what their money could buy, £1,500 would buy a BE2c, £2,250 a Vickers Gunbus and £3,500 a Short floatplane.

The scheme was revived during the Second World War by the Minister of Aircraft Production William Maxwell Aitken, then Lord later Baron Beaverbrook, and the Spitfire captured the public imagination like no other aircraft. The nominal sum of £5,000 was set as the minimum donation to purchase a Spitfire (despite the actual cost being over £8,000) and communities and individuals around the world responded to raise funds for ‘their’ Spitfire.

One of the first Spitfire funds was set up by the Wolverhampton Express and Star newspaper, which had raised £1,250 by 18 June 1940, just a few days after the commencement of the Fund. A total of £6,746 was raised and Spitfire Mk. Vb AB917 was subsequently allocated and named ‘The Inspirer’, for being one of the first funded aircraft. A Ministry of Aircraft Production plaque was presented to the newspaper in honour of their Fund, and this plaque was later donated to the RAF Museum. 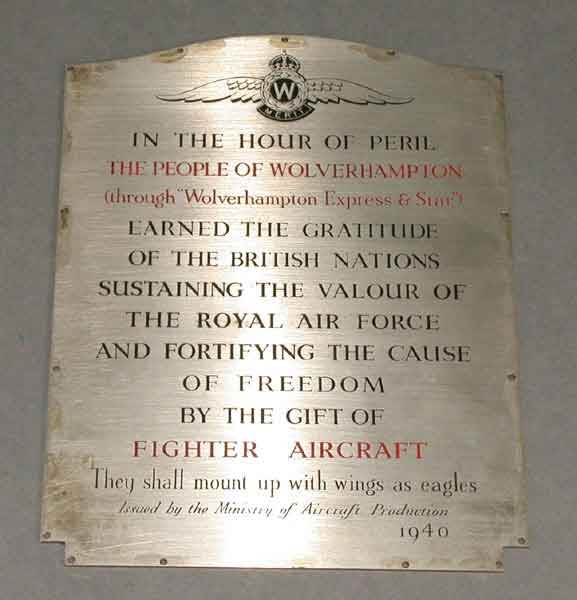 Although purchased in 1940, ‘The Inspirer’ did not begin its operational service until January 1942 when it was assigned to No. 401 (Royal Canadian Air Force (RCAF)) Squadron at RAF Gravesend in Kent. As part of the Biggin Hill Wing alongside Nos. 72 and 124 Squadrons, No. 401 Squadron carried out fighter sweep operations over France, providing fighter cover to medium bomber squadrons attacking targets such as railways, factories and military sites. 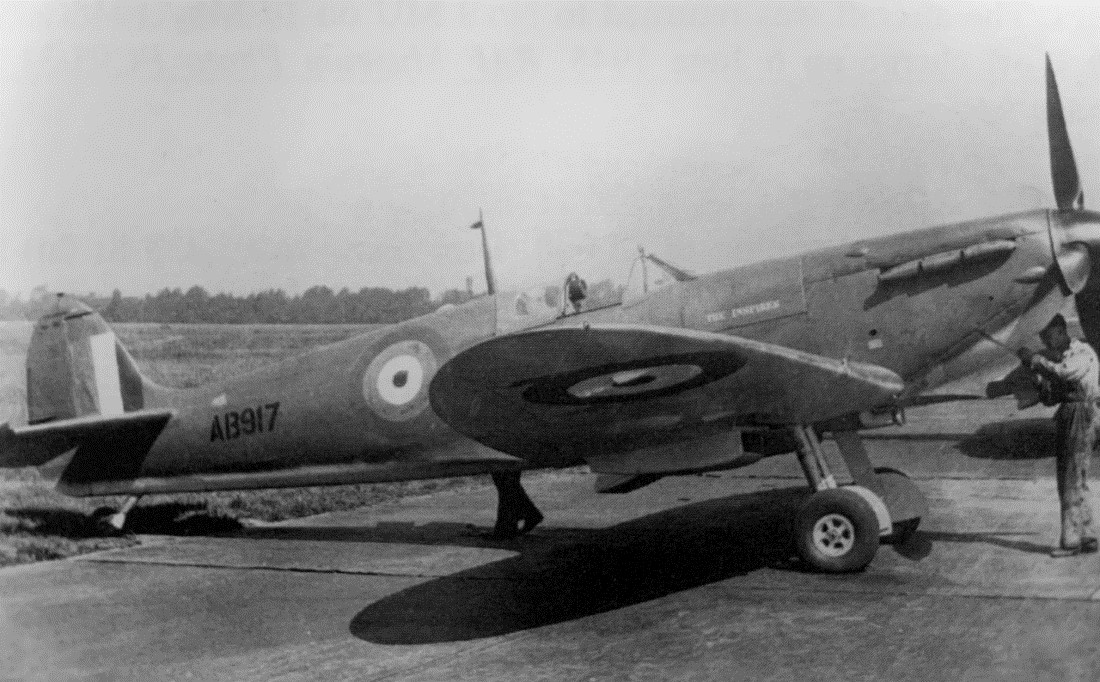 With No. 401 Squadron at this time was Pilot Officer Donald Blakeslee, an American who by the end of the Second World War had flown more combat missions than any other American fighter pilot. Blakeslee flew AB917 on 4 April 1942 as part of a Wing Sweep escorting Boston medium bombers targeting St. Omer railway station. 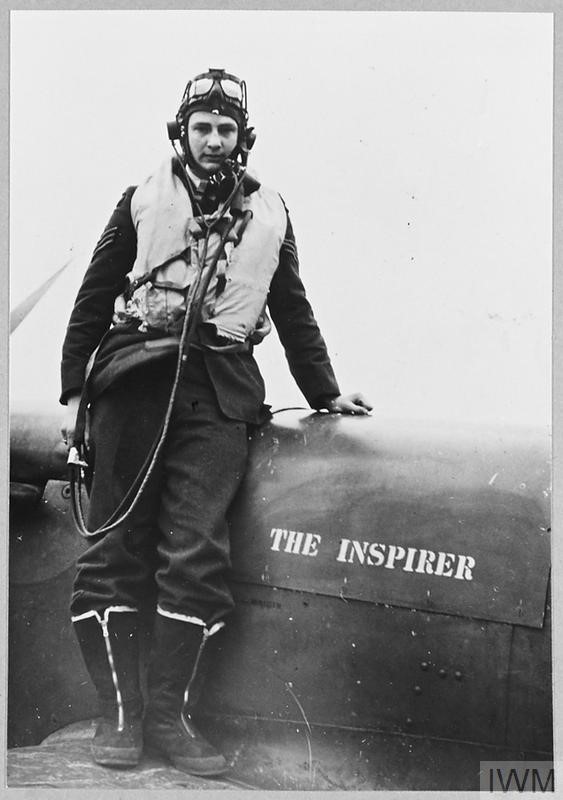 On the wing of ‘The Inspirer’ is 21-year-old Sergeant Alexander Douglas Blakey also of No. 401 (RCAF) Squadron. Blakey flew AB917 on 8 February 1942 on formation and camera gun practice, and then again on 16 February carrying out practice attacks on tanks. Blakey was killed a few days after this photograph was taken, on 9 March, when the Spitfire he was flying broke up during an air test.
AB917 was principally flown by Pilot Officer Gerald Bickle Whitney, a 21-year-old Canadian born in Ontario but resident the USA. Whitney took AB917 on fighter sweeps to Dunkirk, convoy protection patrols over the English Channel, offensive air patrols seeking out Luftwaffe opposition, and air-sea rescue support sorties. 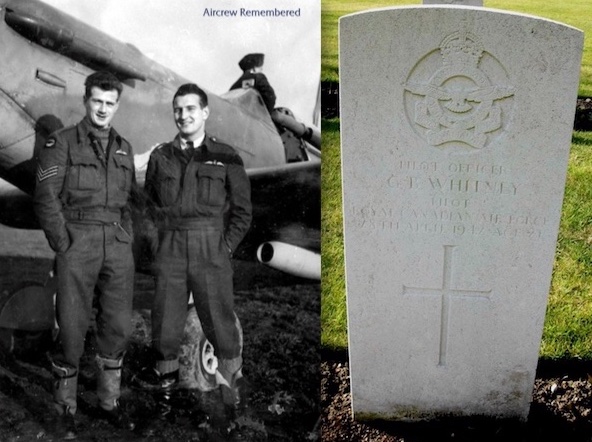 On 28 April 1942 No. 401 Squadron was top cover in a wing sweep for a formation of Boston medium bombers once more targeting St. Omer in France. They ran into formations of German Me 109s and FW 190s and Blakeslee and Whitney in AB917 dived to intercept but were themselves attacked. Blakeslee made two successful attacks on the FW 190s but AB917 was damaged by enemy fire. Whitney managed to get the aircraft back across the Channel but crashed in the village of Whitfield near Dover. Whitney is buried in Brookwood Military Cemetery, Woking.

Following the success of the first fundraising effort, a second Wolverhampton fighter fund began, this time championed by the Mayor of Wolverhampton. It raised £5,076 and the second aircraft Spitfire Mk. Vb P8715 was named ‘Wulfrun’ after Lady Wulfruna, the Anglo-Saxon noble who founded Wolverhampton.

First delivered in 1941 to No. 19 Squadron, by April 1943 ‘Wulfrun’ was with another Royal Canadian Air Force squadron, No. 411 stationed at RAF Kenley in Surrey. It became the regular aircraft of Flight Lieutenant William Thomas Johnstone, a 25-year-old native of Calgary. Johnstone joined the RCAF in 1940 and had served in Canadian squadrons in the UK since 1941. With No. 416 (RCAF) Squadron he had participated in Operation Jubilee, the attempted capture of the port of Dieppe, on 19 August 1942.

With P8715 Johnstone participated in fighter sweeps, patrols and bomber escort operations. On 28 March 1943 they were part of the escort for over 100 American Liberator and Flying Fortress heavy bombers attacking targets in Northern France and on 4 April they escorted 24 Lockheed Ventura medium bombers on a raid against Caen aerodrome in Normandy.

On 14 April 1943, Johnstone and P8715 set out from RAF West Hampnett at 2.25pm, part of a Wing attack against railway rolling stock in the Normandy area. The successful raid was interrupted by attacking enemy aircraft and P8715 was hit, forcing Johnstone to bale out of the stricken aircraft into the sea off Cherbourg. He was able to get into his emergency dinghy and his location was marked, and six aircraft from No. 411 Squadron returned to the scene 90 minutes later, but no sign of him was seen.

What happened to Johnstone was never ascertained, and he is commemorated on the Runnymede Memorial to the RAF’s missing.

The Wolverhampton connection goes much further than the donation by its people. Many Wulfrunians served within the RAF. There are too many to mention, but let’s pick one: Wing Commander Edward Christopher Deanesly DFC.
Wolverhampton born and with a lifetime association to the Birmingham area, Christopher Deanesly was a Battle of Britain pilot whose RAF career included success as a night fighter pilot in the Wolverhampton-built Boulton Paul Defiant aircraft. 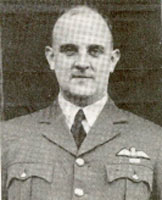 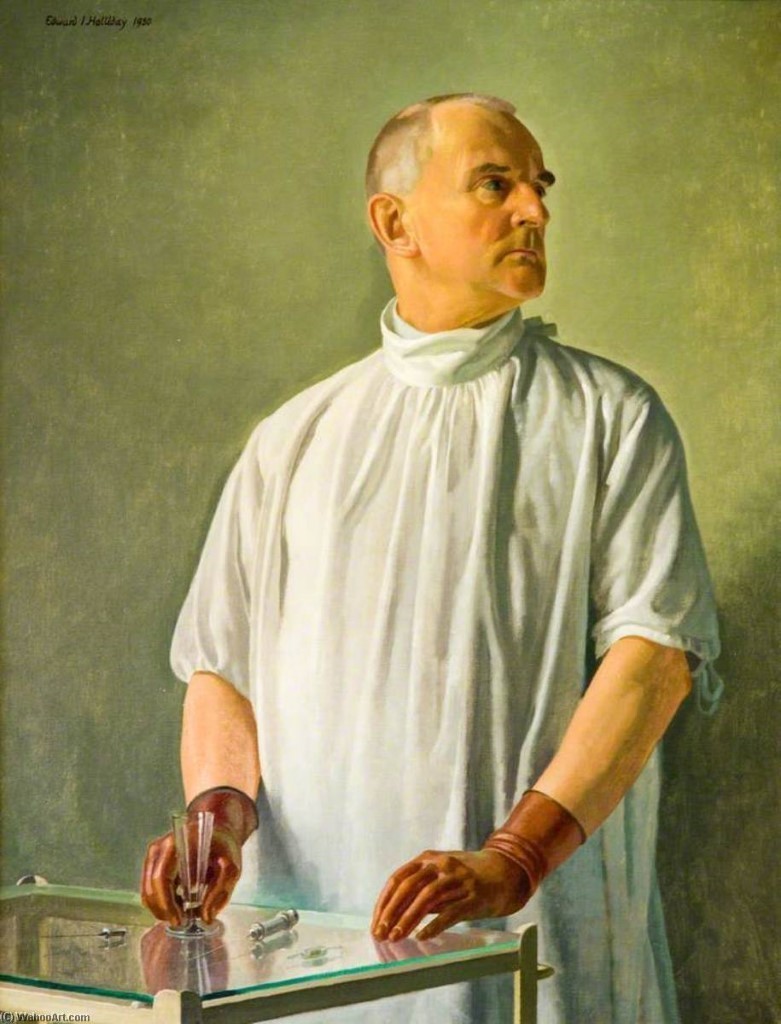 He joined the part time Royal Auxiliary Air Force in 1937 and served as a pilot with No. 605 Squadron based at Castle Bromwich aerodrome in Birmingham. He was present at the opening of Elmdon Airport (now Birmingham International Airport) in July 1939 and recalled in a letter to test pilot Alex Henshaw (X002-9256/007/005/063) how Hams Hall power station in Warwickshire (now the site of Hams Hall Distribution Park) was ‘a most useful navigation aid above cloud’.

He was called up to full time RAF service and on 3 October 1939 he arrived at RAF Acklington in Northumberland to take up his posting with No. 152 (Hyderabad) Squadron, flying the biplane Gloster Gladiator. At this time No. 152 patrolled the North Eastern coastline and Humber and Tyne estuaries. Deanesly participated in patrols, attempted interceptions of enemy aircraft, reconnaissance sorties and convoy escort. While with No. 152 Squadron Deanesly gained the nickname ‘Jumbo’ due to his large stature.

The Squadron converted to the Spitfire I in January 1940 and in July of that year were transferred to RAF Warmwell in Dorset to aid in the defence of Portland Naval Base.
On 25 July a No. 152 Squadron patrol spotted a large formation of enemy aircraft approaching Portland from the south east and flew to intercept them.

The formation consisted of approximately 18 Ju 87 dive bombers, 1 Do 17 and 12 Me 109s, and the patrol flew to intercept. Deanesly in Spitfire K9901 and his Section attacked the Dornier, reporting that he fired a 6-7 second burst of ammunition at it, closing to within 40 yards and only breaking away when he had ‘about rammed’ it. (note 1)

The Dornier, from Sturzkampfgeschwader 1 (Dive Bomber Group 1) based in Normandy, France, was attacked by others after this and crashed at East Fleet Farm Dorset with the loss of one crewman. Deanesly however went on to follow other aircraft from the formation. He described how he flew through a ‘swarm of dive bombers (Ju 87) which were attacking a small ship’ and shot at them as they climbed from their dive. (note 2)

He fired the remainder of his ammunition before noting return fire from one aircraft, and then suddenly his cockpit was filled with black smoke as his engine had been hit. He was too low to bale out and coolly put his Spitfire down on the sea five miles off Portland, managing to escape from it before it sank. He spent an hour in the water before being rescued by the SS Empire Henchman, a Ministry of War Transport tug, and was finally landed at Lyme Regis by an RAF launch.

With time off for recuperation, Deanesly was back in action with No. 152 Squadron by 25 August when RAF Warmwell was bombed and the Squadron scrambled to attack the retreating formation, although Deanesly did not engage with any enemy aircraft.

On Thursday 26 September Deanesly was in one of nine No. 152 Squadron aircraft airborne for an afternoon patrol, when they intercepted a formation of Ju 88 aircraft and accompanying Me 109 escorts flying south over the Isle of Wight. Flying as the leader of Green Section he began an attack on the Ju 88 bombers when he was hit by fire from an Me 109. Wounded, Deanesly nevertheless was able to bale out, landing in the sea twelve miles from the Needles rocks. His aircraft, Spitfire K9982, crashed into the Channel and was lost. Pilot Officer Dudley Williams of Black Section saw Deanesly take to his parachute and land in the sea and was able to direct rescue boats to his location. (note 3) Brought to Swanage, Deanesly was taken to hospital to be treated for his injuries.

This ended his operational service in the Battle of Britain but following convalescence Christopher Deanesly’s RAF career followed a new path as a specialist night fighter pilot.