One of the most important roles that the RAF Museum has is to share its knowledge of RAF history through its people and collections. In this, the RAF’s Centenary year, the Museum has decided to release its very own RAF anthology – a very special one.

We have teamed
up with the Air Historical Branch and an award-wining publishers Extraordinary Editions Limited to launch the RAF Commemorative Anthology, a handmade, limited
edition of 1,500 books of which 250 are signed exemplary copies.

As the RAF’s 100-years history is incredibly rich and diverse,
we have brought together a large selection of fascinating and breath-taking
materials, mission reports, photographs, letters, diaries, artworks, to reflect
and illustrate all 100 glorious years of service and sacrifice, courage, valour
and honour. These documents have been scanned and recreated at full
size and in full colour, when available. Each extract has been included to introduce
an important piece of RAF history or relevant insight.

For example, our RAF Commemorative Anthology contains probably the most important document in the RAF history fully reproduced – the ‘Report
by General Smuts on Air Organisation and the Direction of Aerial operations’.
This very document, submitted to the War Cabinet on 17 August 1917, laid the foundation for the birth of the first
independent air force in the world – The Royal Air Force.

At that time the U.K’s air force consisted of two
organisations the Royal Flying Corps (RFC) and the Royal Naval Air Service (RNAS).
Both organisations entered the First World War, the first war where the
air force was ever used, and they had continued to develop and expand as the war progressed. The RFC, apart from reconnaissance work and artillery spotting,
was the first air service to start bombing raids. The RNAS, as well as launching aircraft to strike land targets and
directing naval gunnery fire, was the first air service to start to attacking enemy ships by using torpedoes.

As both organisations were expanding incredibly rapidly, this produced a number of challenges for the country while fighting the First World War. In 1917, Prime Minister David Lloyd George set up the Committee on Air Organisation and
Home Defence against Air Raids. It was called upon to find a solution to improving the U.K’s defences
in the face of successful German bombing raids and submarine warfare as well as rationalising and organising both services,
as U.K. industry at the time had faced an unprecedented challenge in fulfilling the
conflicting demands of both organisations.

The head of the Committee was the South
African General Jan Smuts and the famous ‘Report by General Smuts on Air Organisation and the Direction of Aerial Operations’ was his second report to
War Cabinet.

This ground-breaking report established that control over the air was as essential as Britannia’s control over the sea and called for the creation of an Air Ministry and an
independent aerial service by merging the RFC and RNAS. The report was debated over and the decision made.

However, at the beginning this decision was not excepted very
enthusiastically. Firstly, many thought that establishing a new service should
not happen at the crucial point of the war. Secondly, there was a long-lasting
inter-rivalry between the RFC and the RNAS. Thirdly, the Admiralty didn’t want
to lose the control over the air force. Nevertheless, in 1 April 1918 the new
air force was born and this occasion has been described as one of the most
remarkable achievements of the First World War.

‘General Smurts’ Report’ is an incredibly valuable document,
but it is just one page in a vast array of broad and diverse documents,
photographs, letters, reports and diaries, which bring to life the glorious
history of the RAF in our RAF Commemorative Anthology.

The edition is limited to 1.500 copies worldwide. 250 of them are Signed Exemplary Edition published in 5
different versions, each representing an iconic aircraft and signed by three
pilots or crew from that aircraft: The Spitfire, the Lancaster, the Vulcan, the Harrier and the Tornado.

A donation from all sales will be made to the RAF100 Appeal supporting the RAF Association, Charitable Trust, Benevolent Fund,
Museum and the Royal Air Force. 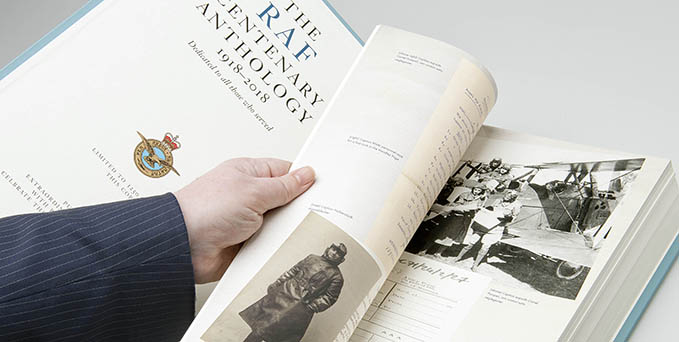 The first copies of the finished anthology have been sent out. But don’t worry it is not too late to purchase one for yourself and enjoy 100 breath-taking years of the first independent air force, through original documentation the vast majority of which has not been published before.

If you wish to purchase a copy of The RAF Commemorative Anthology, you may reserve a copy here.