The RAF in Russia

The aftermath of the First World War

The First World War is remembered as one long struggle of trench warfare, mainly in Flanders Fields. Through the memorable story of Lawrence of Arabia, the desert war against the Ottoman Turks is also known. Much less known are those gruesome battles in the Balkans and the Alps, the guerrilla warfare in German East Africa, the naval encounters in the Pacific Ocean, but also the massive battles fought on the Eastern front against the armies of the Russian Tsar.

Due to several defeats and a communist rebellion at home, the latter was forced to sign a peace treaty with the Central Powers. Shortly after, he was ousted from power by the communists and his country descended into the maelstrom of civil war.

The victorious Allied governments opposed the communist ‘Reds’ take-over of Russia and feared it would lead to a Marxist revolution at home. Therefore, they decided to support the ‘Whites’ as the Russian government troops were known.

In the north, enormous stocks of arms and munitions had been sent to the tsarist troops to be used in their fight against Germany. An Allied naval force was sent to this area to keep these out of the hands of the victorious Germans and later the Communists. For similar reasons, some Allied forces took over Vladivostok, a major port in the Far East of the country, not far from Japan. In the Caucasus in the South, the German-Russian treaty dictated this area was to be handed over to the Ottoman Turks, who were allied to the Germans. British forces were sent to Baku in Azerbaijan to deny such a move.

After the defeat of the Central Powers, the British forces remained in the area to support the Government forces against the new threat of the Reds.

The Royal Air Force in the North

The expedition in the north of Russia was mainly focused on the important ports of Murmansk and Arkhangelsk. Although this was mainly a naval and army operation, the Royal Air Force as well as the remains of the Tsarist Russian Air Force were called upon to assist the operations on the ground.

The Russian aircraft were old and worn, while the RAF used aircraft which had until that point been used in France, such as the RE.8, an example of which can be seen in Hangar 2 at the RAF Museum in London.

Different kind of missions were flown, such as reconnaissance, bombing and propaganda leaflet dropping. The latter turned out to be dangerous for an observer with the name of FJ Shrive. A big bunch of leaflets got caught in the rudder wires causing the rudder to jam. Shrive crawled down the wooden and canvas covered fuselage to pull out the bits of paper with a constant risk of falling through the bottom.

One of the greatest dangers for aircrew were forced landings as the area was densely wooded and inhospitable. The chances of being rescued were slim. As winter set in, the weather conditions reduced the number of missions. Luckily for the RAF personnel, one RE.8 was kept operational to transport mail, at a time when air mail was quite a new concept. 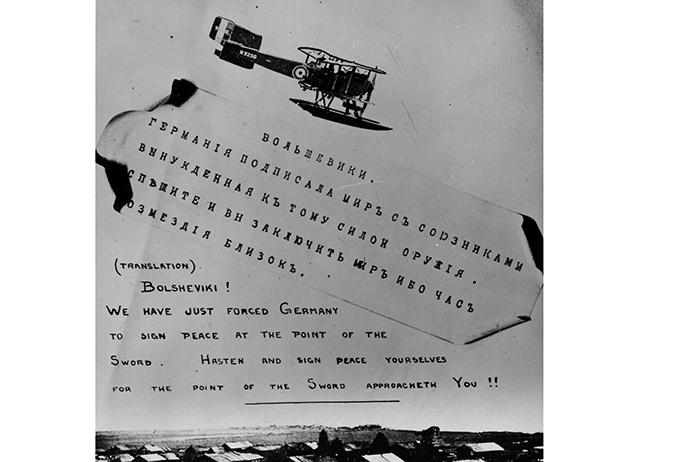 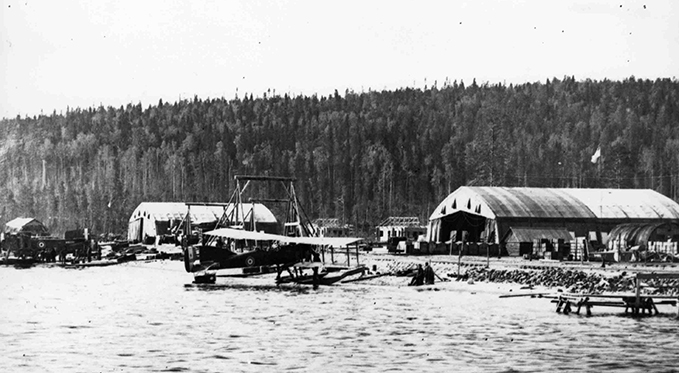 A different formation was the RAF River Force, equipped with seaplanes, such as the Fairey IIIC, as well as observation balloons. The Fairey III proved to be a reliable design with improved versions staying into service until the late 1930s. The RAF River Force relied on river barges with supplies coming from the seaplane carrier HMS Pegasus. As with the landplanes, the seaplanes flew reconnaissance and bombing sorties, often attacking enemy gun boats and river craft. 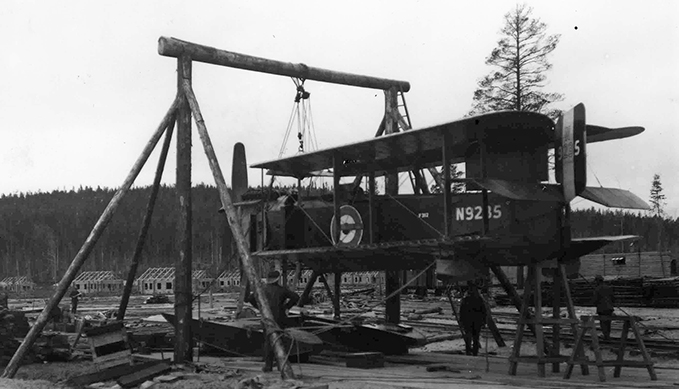 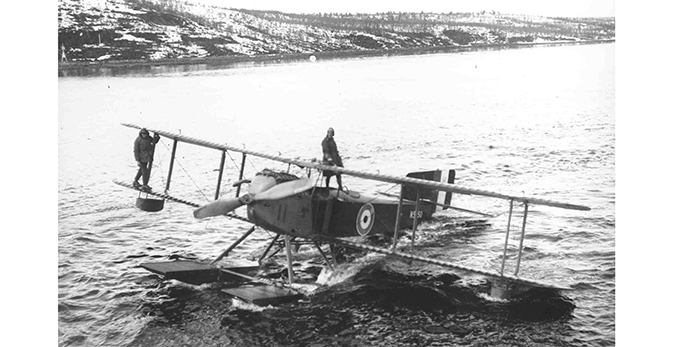 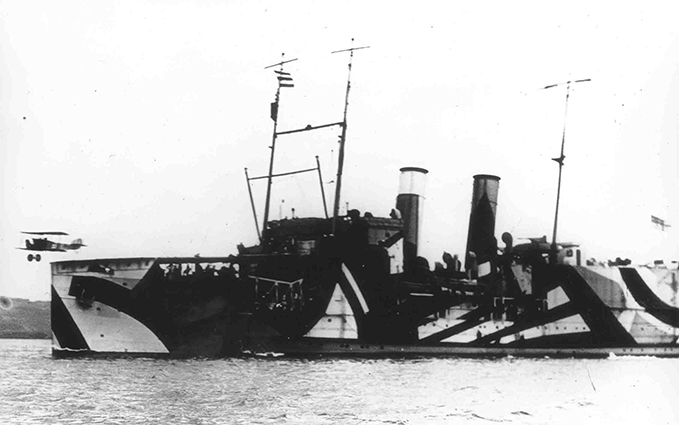 The Northern expedition came to an end in late 1919, but few people would have imagined the RAF returning twenty-two years later, this time to aid the Reds.

In 1941, the Royal Air Force sent a fighter wing (Force Benedict) to assist the Soviet Air Force against the German and Finnish Air Forces, threatening the Allied supplies to Murmansk. The British were to deliver Hawker Hurricane fighter aircraft, an example of which can be seen in RAF Museum’s Battle of Britain exhibition in Hangar 5 (London), and to train Soviet pilots and ground crew in operating and maintaining them.

The Royal Air Force in the South

The mainly Cossack Army was pushing back the Red Army in the South, while the British Navy attempted to neutralise the Communist controlled naval fleet. To support these actions, in January 1919, No. 221 Squadron was shipped across the Black Sea to Batum harbour and from there moved to their base in Petrovsk on the Caspian Sea.

This squadron was equipped with Airco DH9s which were powered by liquid-cooled engines. The freezing temperatures meant that the engines were almost impossible to start. Gradually, hangars and living quarters were built, which improved the serviceability of the aircraft. However, conditions remained grim and the moral and the health of RAF personnel was poor.

The low moral should be no surprise as most of the men had signed up for the duration of the War, but several months after the Armistice, were risking their lives in a far-away place fighting a war for reasons they did not understand. 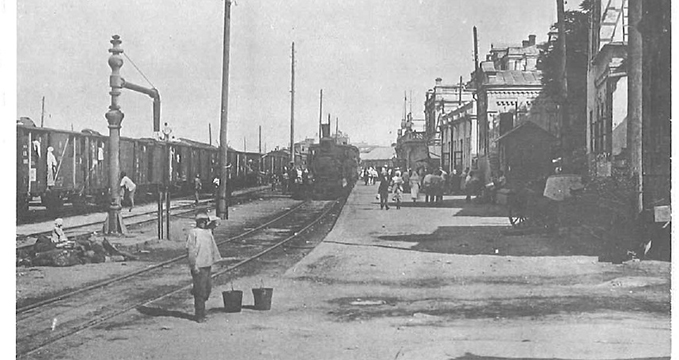 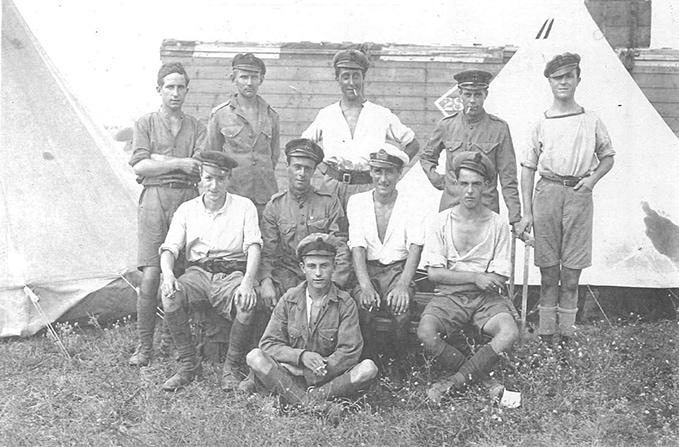 In February 1919, No. 266 Squadron was moved to Petrovsk, equipped with Short 184 seaplanes. Poor weather was limiting the operations of the squadrons, but as weather improved the RAF became heavily involved with scouting the Red ships, reconnoitring and attacking the enemy troops on the ground.

Most of the fighting centred around the important city of Astrakhan, near the estuary of the Volga River. Several boats were attacked near its port. Some aircraft were damaged by ground fire, but more losses were incurred due to accidents, sometimes with fatal consequences.
For example, on 15 May 1919, one DH.9 crash landed and went up in flames, killing its crew. In June 1919, the famous Canadian Ace Major Collishaw arrived to take control of a third squadron, No. 47, equipped with DH.9s and Sopwith Camels. 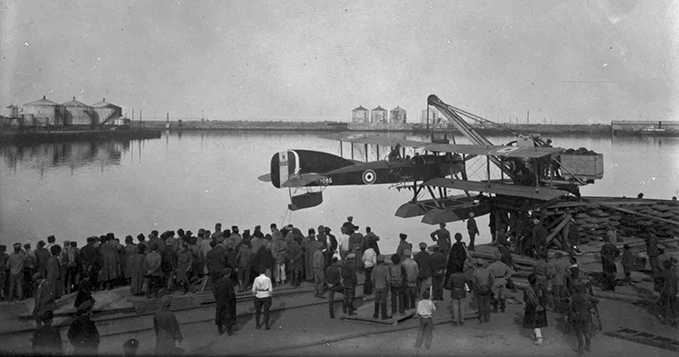 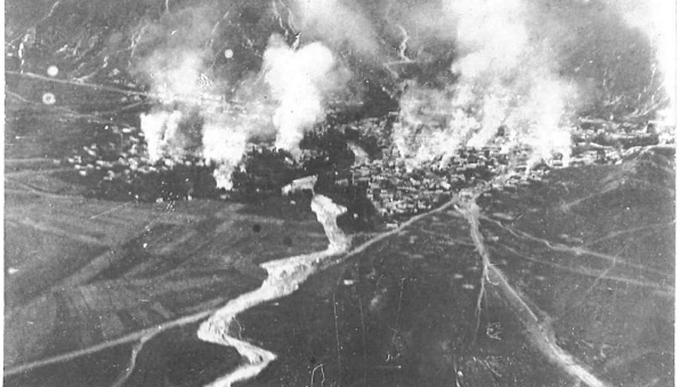 The Reds’ air force was very limited in capabilities. They had few fully-trained pilots, their aircraft were well-worn and suffered from a shortage of spare parts. Yet, on 16 June during a major raid on Astrakhan, a DH9A was attacked by a Red fighter aircraft and shot down.

This was even more remarkable as the fighter aircraft was an old French Nieuport 17 which was slower than the DH9A. Instead, the Red pilots carried out a frontal attack, hitting the DH.9A in the radiator after which the engine overheated and burned out.

The British crew, lieutenants J. Mantle and H. Ingram, landed safely but were captured by Red cavalry and sent to Moscow. They were held captive until they were repatriated in 1920. 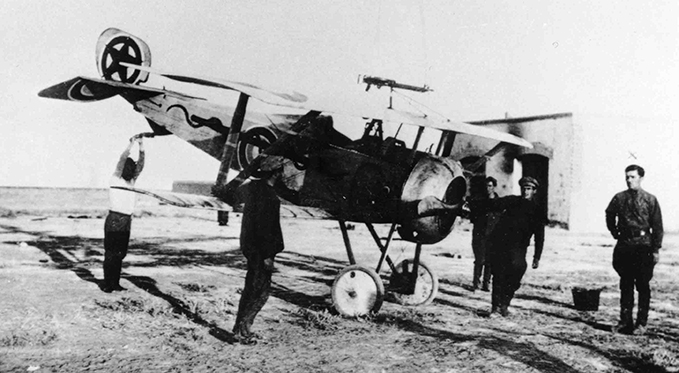 The Volga river was an important lifeline for the Reds’ forces. Barges were used to transport troops across much of Russia and for this reason, they proved to be valuable targets for the DH9s. However, these vessels were often armed with machine guns.

After bombing and strafing the river traffic, the DH.9 of Captain Anderson and his observer Lieutenant Mitchell received machine gunfire, piercing the fuel tank. Mitchell climbed out on the wing, holding on to the struts between the wings with one hand while he blocked the leak with the other. However, they then noticed that another DH.9 had been forced to make a crash landing. They decided to try and rescue its crew. Anderson landed his plane nearby, while Mitchell held back the approaching cavalry with machine gunfire.

The other two crew members ran several hundred yards before squeezing into the observer’s cockpit with Mitchell once again hanging on to the wing.

The White forces in the Baltics, Ukraine, Far East and the Caucasus were internally divided. In fact, due to their geographic location, they were physically divided by the Reds who controlled the heartland of Russia. As such, it proved impossible to orchestrate a concerted offensive against the Communist forces, despite the support by the Allies.

With the overall collapse of the White Forces, the British were forced to make an honourable withdrawal in 1920. The contribution made by the RAF aircrews was great and disproportionate to their small numbers, but eventually had no impact on the outcome of the war, which was overwhelming in scale. 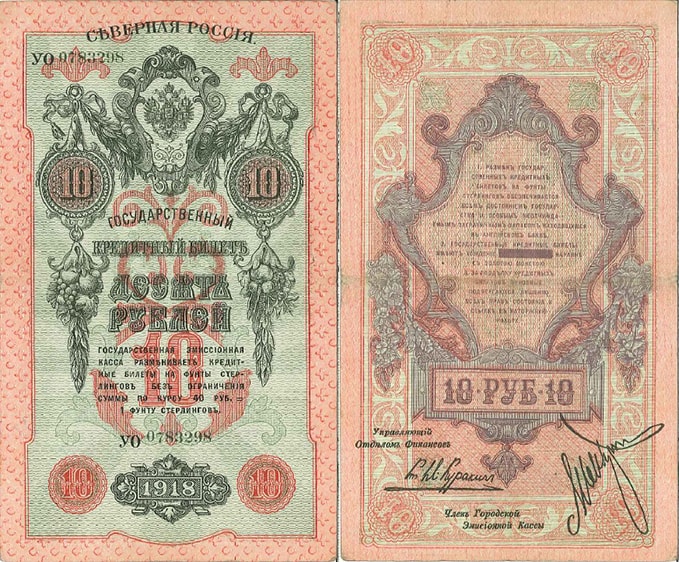