For St George’s Day, we’d like to commemorate and celebrate some of the many English men and women who served courageously in the Royal Air Force. In many ways, they embodied the legend of George, the military saint and symbol of English identity.

The story of St George and the dragon is one of bravery against the odds, and personal sacrifice. It is enshrined in St George’s Chapel of Remembrance, first dedicated at RAF Biggin Hill in 1943. The chapel served as a memorial to its sector pilots who by June of that year, had destroyed over 1,000 enemy aircraft. In 1946, Chaplain Reverend Cecil King unveiled a plaque depicting St George and the dragon. He was quoted in the Kent Messenger: 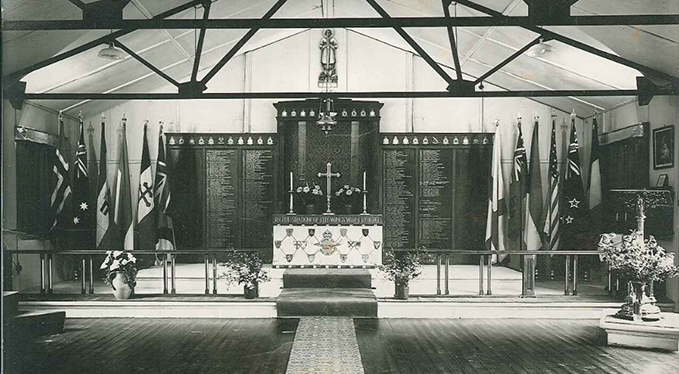 The fight to be ‘brave against himself’ evokes the courage and fortitude displayed by the RAF’s fighter pilots such as Sqn Ldr John Colin Mungo-Park. The article is from a collection of material in the RAF Museum Archive. It includes correspondence, newspaper cuttings and some of Mungo-Park’s personal effects. 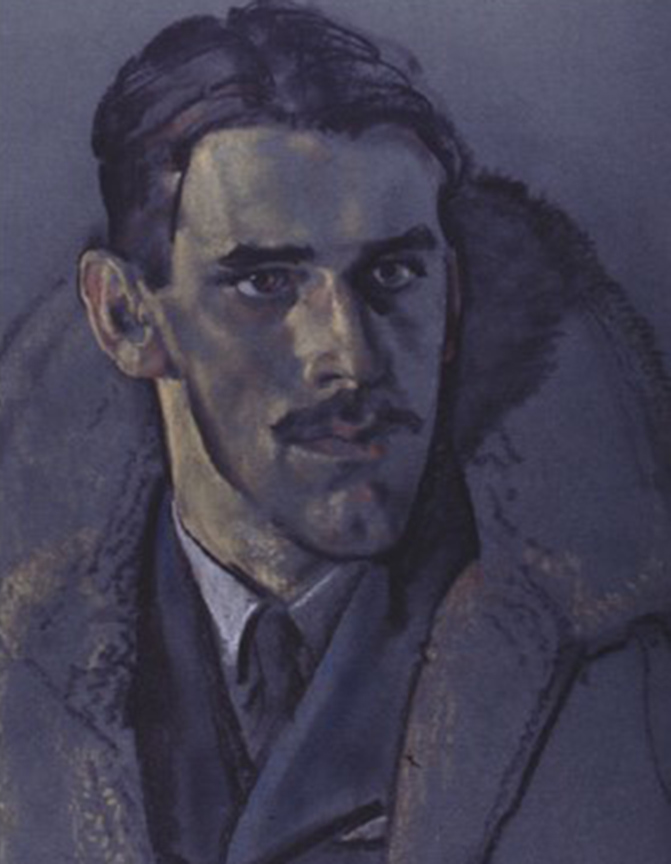 Bolton fighter pilot John Colin Mungo-Park joined the Royal Air Force in June 1937 and went on to fly with No. 74 Squadron in the Battle of Britain. Sqn Ldr Mungo-Park became a flying ace; claiming 11 aircraft destroyed (two shared), five probables and four damaged. In November 1940, he and Plt Off H. M. Stephen together brought down a Messerschmitt Bf109. The celebrated action was the 600th victory claimed for Biggin Hill.

The following June Sqn Ldr Mungo-Park displayed great courage and fortitude during a sweep over the English Channel. After bringing down two Messerschmitt Bf109s, his Spitfire’s engine seized as he flew home to England. Despite the damage, he remained airborne and landed at RAF Hawkinge. For this great display of skill and his tally of aircraft destroyed, he received a Bar to his Distinguished Flying Cross. The citation praised his courage and leadership. Sadly, he was killed less than two weeks later while on another fighter sweep over France.

The image of St George fighting the dragon is also engraved on the Most Distinguished Order of St Michael and St George. From 1818, the Order has been presented to British subjects for services abroad and in the Commonwealth. Notable English recipients include MRAF Sir John Maitland Salmond, whose medals and personal papers are in the RAF Museum collection. 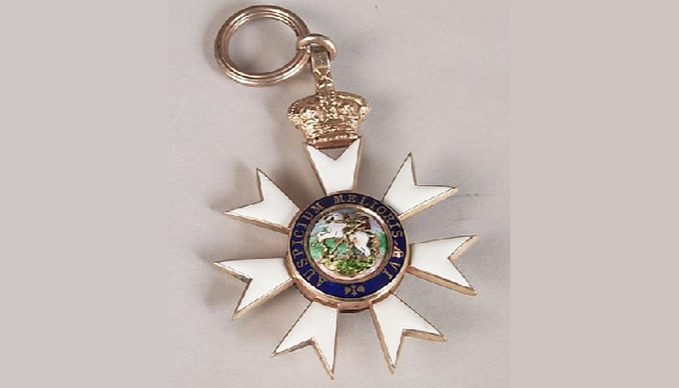 MRAF Sir John Maitland Salmond is remembered for resourcefulness and leadership qualities which ensured he quickly rose through the ranks. Born in 1881, he was a skilled pilot who earned his Royal Aero Club Certificate at Hendon in 1912 and the following year set the solo British altitude record of 13,140 feet. In the First World War, he oversaw the restructure of flying training: improving aircraft supply; introducing standards for pilot instruction; and increasing the number of aerodromes. It was said that “If any man can make Britain supreme in the air, that man is John Maitland Salmond”. 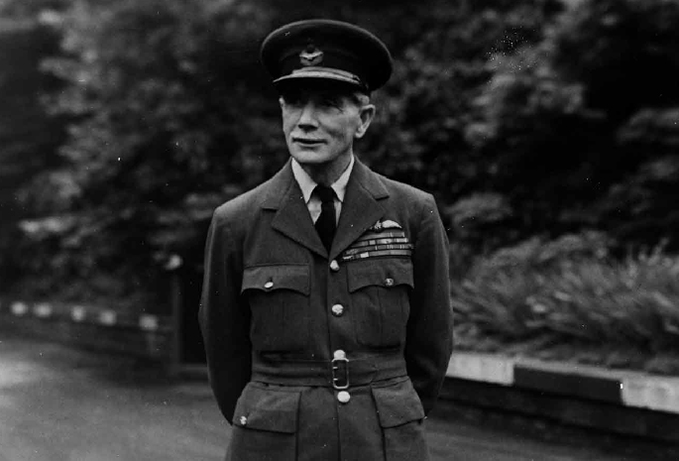 In 1922, he demonstrated the success of air power as AOC in Iraq, restoring order with limited resources. He was afterwards appointed Chief of Air Staff and Marshal of the Royal Air Force in 1933. During the Second World War, he played a role in organising Air Sea Rescue. 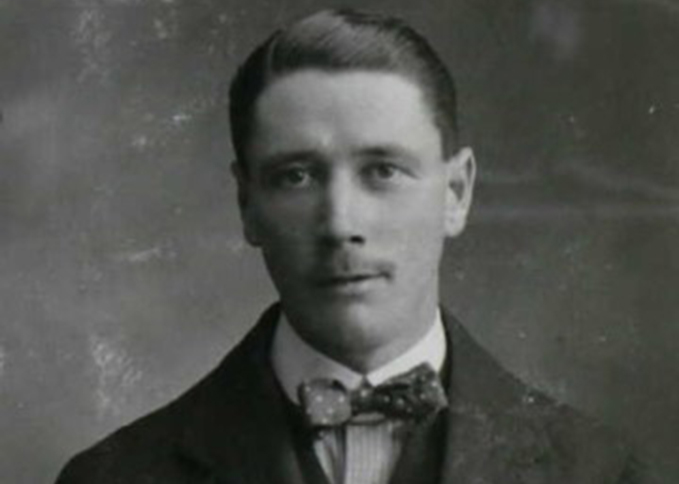 It isn’t only RAF commanders and famous fighter pilots whose bravery deserves an honourable mention in the annals of RAF history. Many stories of courage also come from men and women awarded the George Cross for supreme gallantry not in combat. This award for non-military acts of heroism was introduced during the Blitz. King George VI announced its creation from an underground air raid shelter in September 1940. He said:

“The walls of London may be battered, but the spirit of the Londoner stands resolute and undismayed…’there’ll always be an England’ to stand before the world as a symbol and a citadel of freedom” 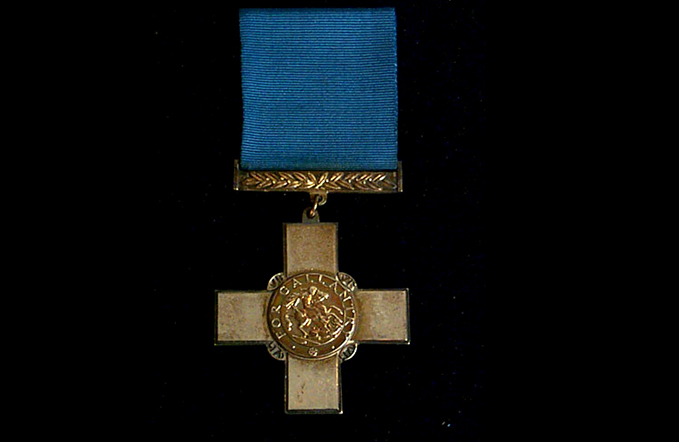 Most of George Crosses awarded during 1940-41 were for brave deeds performed during the Blitz. Among them was an award for Acting Flt Lt Wilson Hodgson Charlton from County Durham. He dealt with over 200 unexploded bombs during September-October 1940 while on Special Duty Bomb Disposal. A month earlier Acting Squadron Leader Eric Laurence Moxey was cited for a George Cross after he was killed attempting to defuse two unexploded bombs at RAF Biggin Hill. 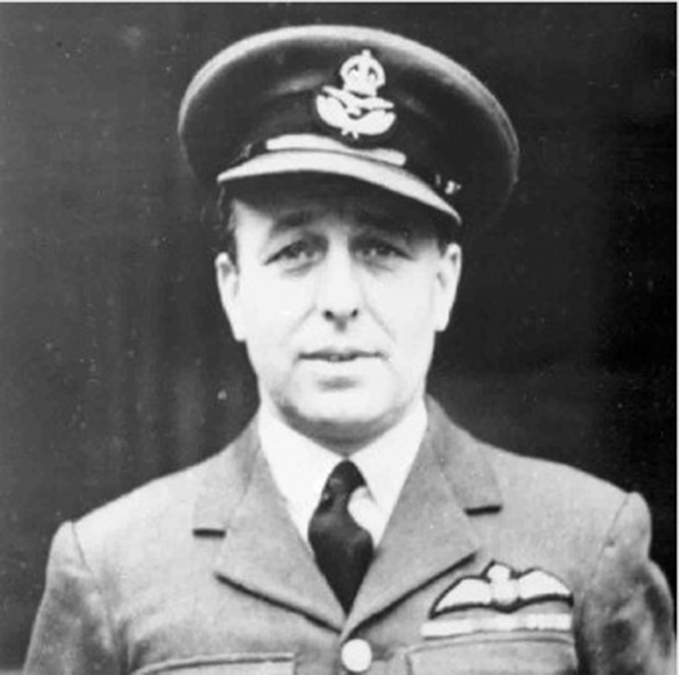 Hampshire born Daphne Pearson was the first woman to receive a gallantry award during the Second World War. The WAAF medical orderly was awarded an Empire Gallantry Medal, converted to a George Cross in 1941. In May 1940, when an Avro Anson Mk 1 crashed near the WAAF buildings at RAF Detling, Cpl Pearson rushed to the burning aircraft to save the Pilot Officer David E Bond. As the aircraft and a bomb exploded she used her body as a shield against the blast and splinters, saving the life of the seriously injured pilot. Her actions earned a mention from Prime Minister Winston Churchill in the House of Commons but she preferred not to talk about the events and insisted that she was only doing her duty. 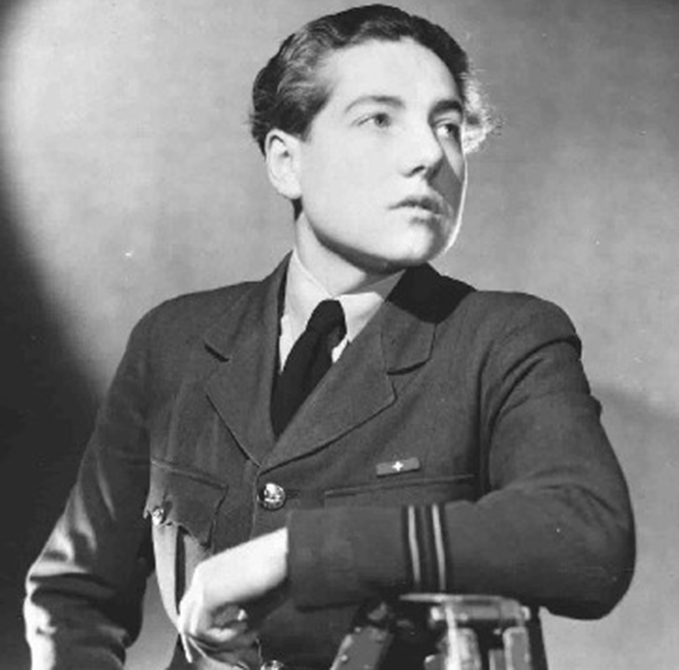 London’s Wg Cdr Forest Frederick Edward Yeo-Thomas and Flt Sgt Stanley James Woodbridge were each awarded a George Cross for actions in which they showed extreme courage and loyalty to their country. 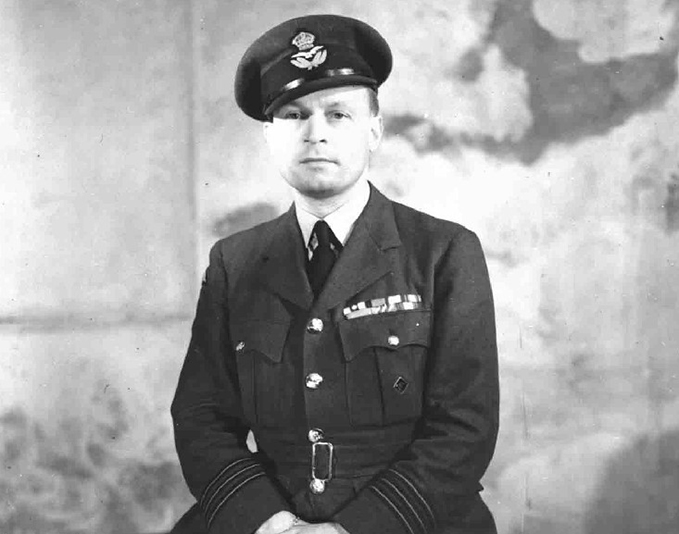 Wg Cdr Yeo-Thomas joined the RAF at the onset of war in September 1939 and was parachuted into occupied France as a Special Operations Executive agent in 1943. While passing on intelligence, he managed six narrow escapes before he was betrayed to the Gestapo in 1944. While imprisoned in Paris he was badly beaten and tortured but refused to disclose any information to the enemy. He organised several daring escape attempts and was eventually successful in reaching safety in April 1945. 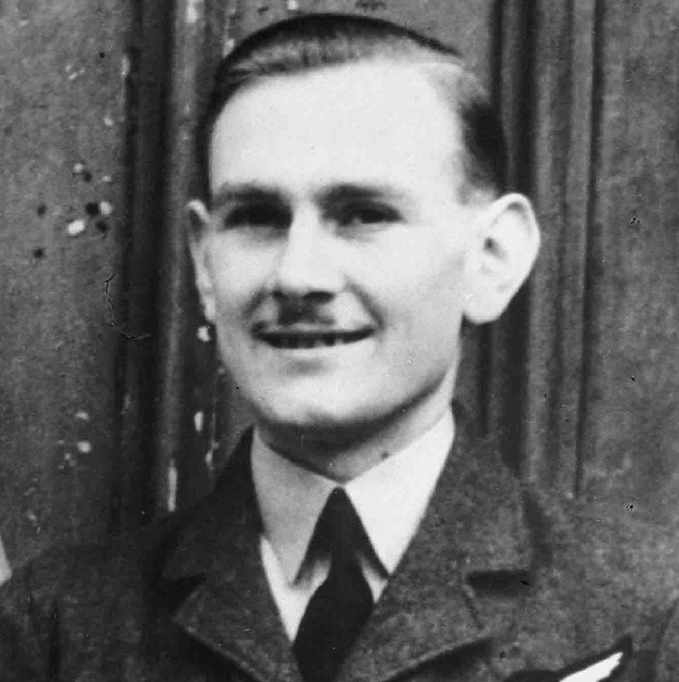 Flt Sgt Stan Woodbridge was part of the crew in a Consolidated B-24 Liberator which crashed in the Burmese jungle in January 1945. The crew were flying on a mission to gather information on Japanese radar establishments, and were captured and interrogated by the Japanese Intelligence Service. Flt Sgt Woodbridge was the focus of interrogation due to his knowledge as a Wireless Operator but was courageous to the end. He refused to reveal any information and was put to death. Flt Sgt Woodbridge was cited for a posthumous George Cross. His inconsolable father placed a wreath on his grave reading “From Stanley’s dad. Boy, I’m proud of you!”. Flt Sgt Woodbridge’s George Cross is in the RAF Museum collection. 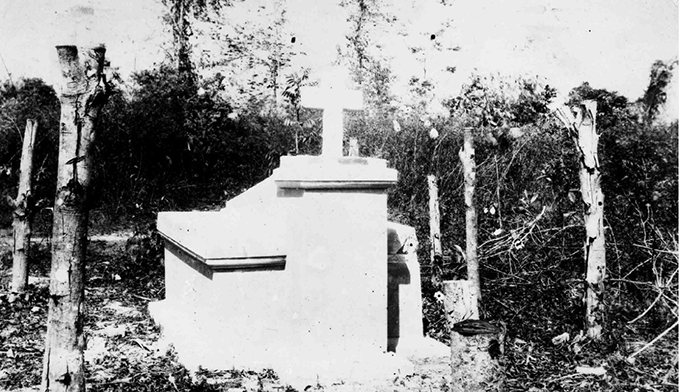 On a final note, it seems appropriate to mention Flt Lt Jack Quinton DFC who grew up in North London not far from the RAF Museum. Flt Lt Quinton was born in London in 1921 and volunteered for the RAF in September 1939. He received a Distinguished Flying Cross for his “courage and devotion to duty in air operations” as a member of No. 604 Squadron In 1944. 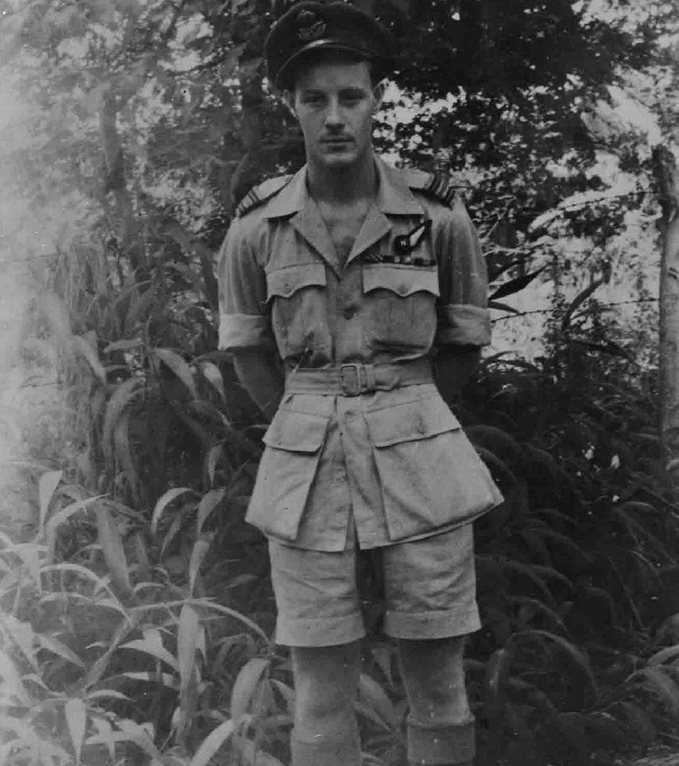 He was awarded the George Cross in 1951 for an act of the utmost self-sacrifice. On 13 August 1951, Flt Lt Quinton was a Navigator under instruction in a Vickers Wellington while ATC cadet Derek Coates was a passenger. When the aircraft was involved in a mid-air collision and began careering towards the ground, Flt Lt Quinton handed the only parachute he could reach to the young boy. He sacrificed his own chances of survival in the process. The 186 North London Scout Troop, in which he was a Patrol Leader, praised Flt Lt Quinton’s leadership and sense of duty. A memorial plaque at the United Reform Church in Whetstone commemorates a man “who gave his life for a friend. Greater love hath no man than this”.