Our recent Facebook poll has revealed that the aircraft most of our Facebook followers would like to hear more information about is the de Havilland Mosquito. We promised to share a Facebook post about this fantastic aircraft but as we have quite a substantial amount of material we decided to dedicate a blogpost to it instead. 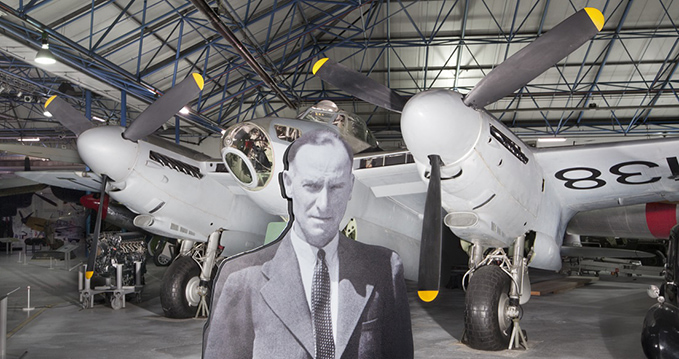 The de Havilland Mosquito was also called the ‘Wooden Wonder’. Sir Geoffrey de Havilland decided to build his aircraft out of wood. This was a controversial decision as almost all combat aircraft at the time had a metal structure. Although it is often believed that this was to preserve precious metals and would create an aircraft which could be built in woodworking shops, the main reason was because de Havilland felt confident that a wooden aircraft could be lighter and more streamlined. He had demonstrated so with his previous design, the DH88 Comet racing aircraft. 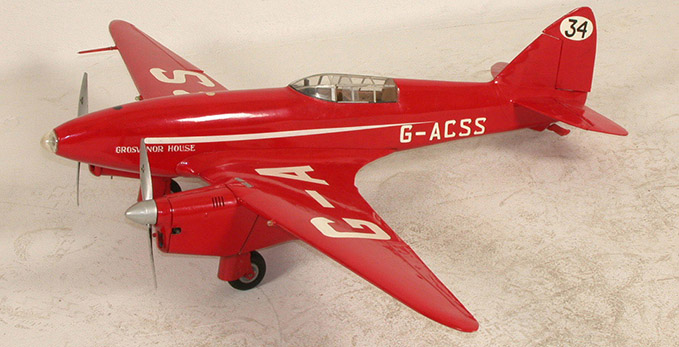 Although most of the aircraft was constructed out of wood, certain structural elements as well as the engine compartment were made out of metal. The wood consisted of three layers consisting of Ecuadorian balsa wood and two layers of three-ply birch wood, harvested in the UK, US and Canada. The wood was light yet strong and allowed for a smooth aerodynamic profile. Also fir and spruce were used throughout the aircraft. 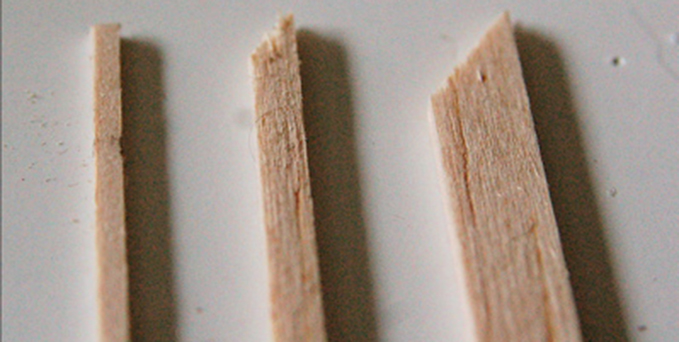 Even more controversial than the use of wood was the decision to forgo any defensive armament, rather rely completely on superior speed. The Air Ministry were reluctant to accept this aircraft. They were right to believe that this aircraft may be faster ‘at the moment’ but would become defenceless once the enemy adopted faster fighter aircraft.

However, the projected performance of 400 miles per hour and a range of 1,500 miles warmed the Air Ministry to the proposal. 50 aircraft were ordered in March 1940, but interestingly, there was no consensus whether to use it as a bomber, reconnaissance or fighter aircraft. The Air Ministry still felt gun turrets were needed to use the Mosquito, as it was now known, as a bomber. It was the need for fighters during the Battle of Britain and the Blitz which kept the project alive. 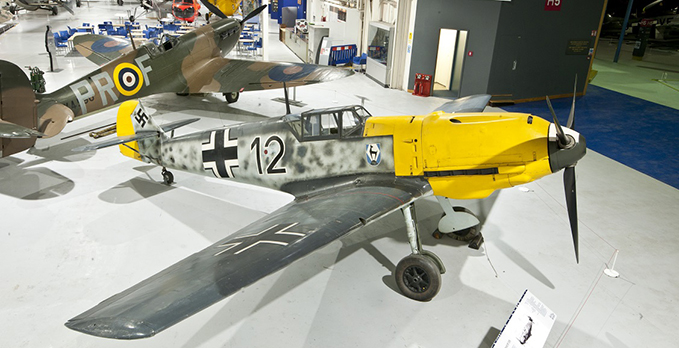 A Mosquito with mock gun turrets was tested, but the aerodynamic drag resulted in a much-reduced speed. In May 1942, the first bombing raids were carried out which proved to be highly successful after which the RAF and the Air Ministry relented and embraced the Mosquito. The Mosquito bomber not only proved to be fast, it was able to carry four 500 lb. bombs and drop them with remarkable accuracy, as shown by a highly publicised low-level attack on the Gestapo Headquarters in Oslo on 26 September 1942. They later repeated this feat against several targets, such as Amiens prison, which enabled the liberation of French Resistance fighters. 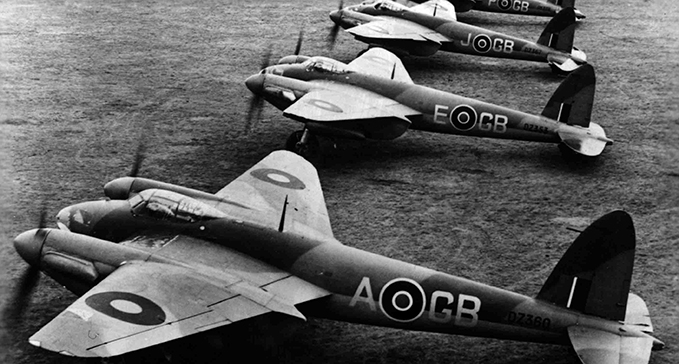 It could also carry special loads, such as the ‘cookie’. This name hid the fact that it was a massive 4,000 lb. bomb. It did not resemble a bomb, but had a cut-off cylindrical shape. Another unusual load was the Highball bouncing bomb, a smaller version of the Upkeep bomb used by the famous Dambusters. The Mosquitoes could also carry ‘Window’ which was a codename for thin metal strips which would jam German radar, rendering it useless. Finally, the Mosquito could drop brightly coloured flares on targets, enabling the main heavy bomber force (Lancasters and Halifaxes) to hit an otherwise blacked out target with much greater accuracy. 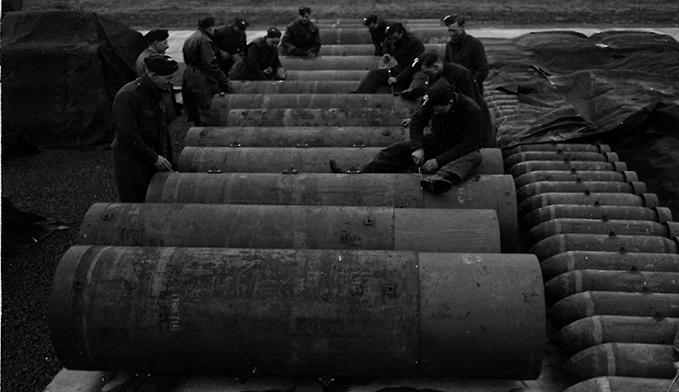 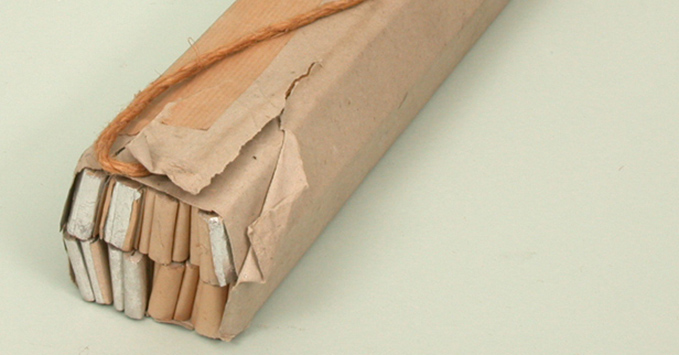 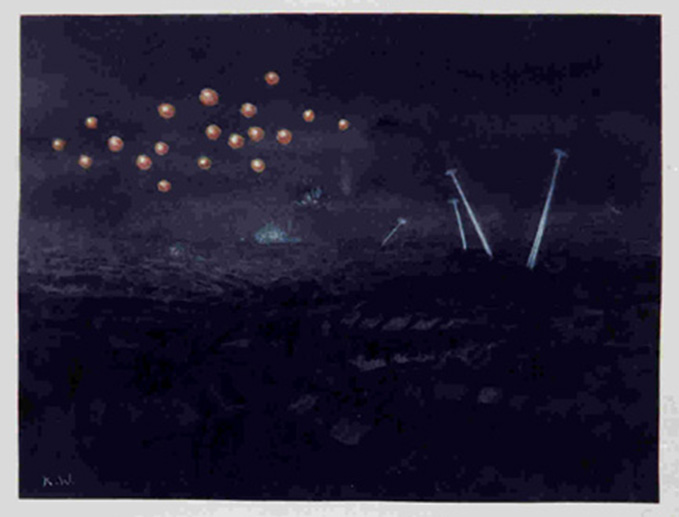 The Mosquito NF Mk. II was a night fighter, equipped with on-board radar and entered Home Defence service in August 1942. Due to its excellent radar, high speed and powerful armament of eight guns, it was successful in intercepting German bomber aircraft. When more aircraft became available, the Mosquito escorted RAF bombers over Germany, actively hunting German night fighters. The Mosquito intruder became the main scare for the Luftwaffe’s night fighters, forcing them to carry a rear gunner for their own protection. It even brought the Germans to develop their own wooden ‘Moskito’ night fighter, though the design was less than perfect and it failed to become operational. 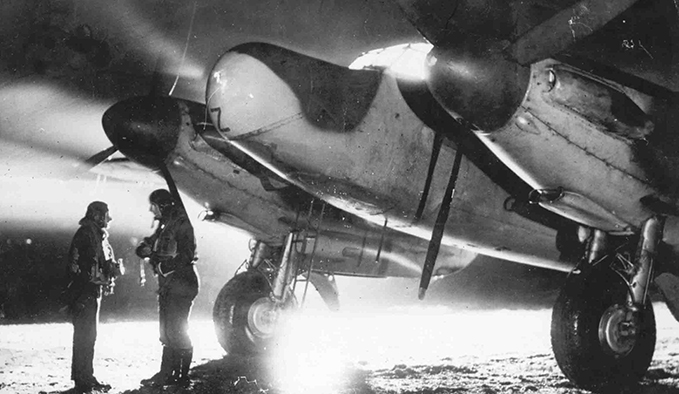 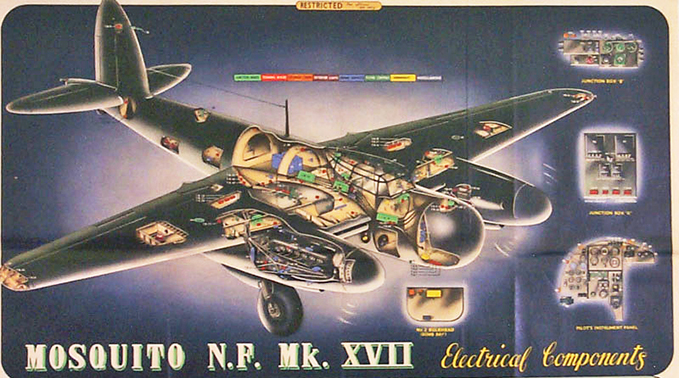 Photo reconnaissance was equally successful. Able to fly at high altitude and at great speed, the unarmed Mosquito could penetrate deep into German airspace with little risk of being intercepted. It famously photographed the Nazi Peenemünde Army Research Centre, where the V2 rockets were being tested, enabling the RAF to conduct a massive 600 bomber raid of the facilities, delaying the programme by two months. The penultimate recon version was the PR Mk 34, optimised for long range flight in the Pacific. With a full fuel load its range was 3,600 miles and its maximum speed was 425 mph, faster than any aircraft in the Japanese inventory.

Beside these three versions, several more versions were developed. The Mosquito FB Mk.VI was the fighter bomber version and packed an impressive punch of four 20 mm cannons and four 7.7 mm machine guns with two 500 lb. bombs or up to eight 60 lb. rockets. Most spectacular was the Mosquito FB Mk. XVIII, also known as the Tsetse (fly), armed with a mighty Molins 6-pounder / 57 mm cannon, capable of destroying ships and U-boats. 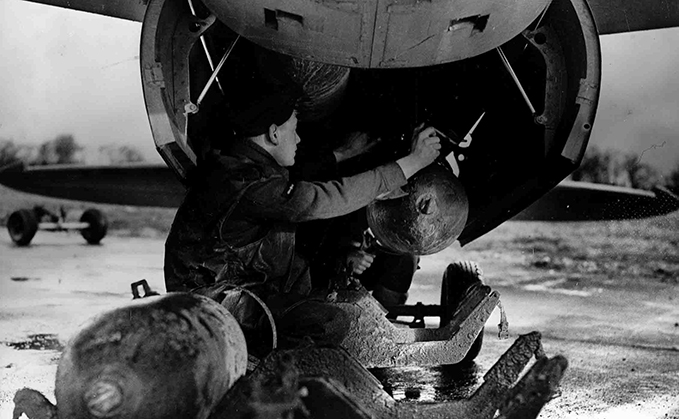 A major user of such aircraft was the Banff Strike Wing in Scotland. Toward the end of the war, it was led by Maxwell Aitken. This was not because he was the son of Lord Beaverbrook, the Minister of Aircraft Production, but because he was a top fighter ace with 16 German aircraft on his tally. The Wing consisted of six Coastal Command squadrons, operating in Norwegian waters against German shipping. Their Mosquitoes would run the gauntlet of anti-aircraft fire and unleash a devastating attack. On one occasion, a Mosquito FB Mk VI was badly damaged from striking the mast of a ship. That demonstrated both the low altitude of these strikes as well as the strength of the Mosquito’s wooden frame. 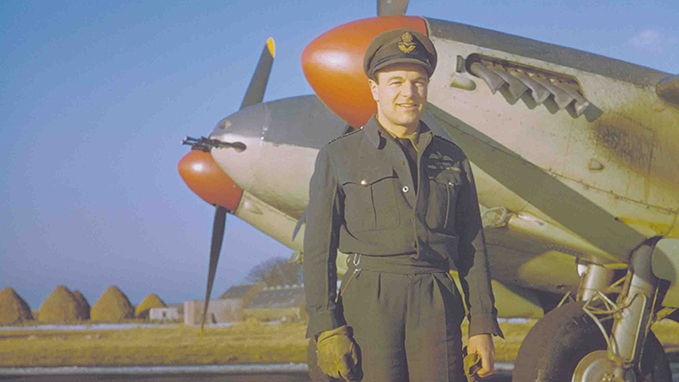 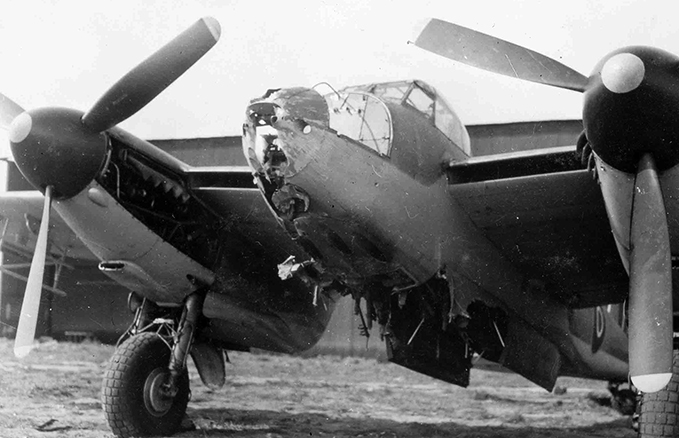 Shortly before the end of the war, the first Sea Mosquito took the skies; a version designed to operate from aircraft carriers. The famous test pilot Eric ‘Winkle’ Brown undertook tests from HMS Indefatigable, the first landing-on taking place on 25 March 1944. Also built were trainer and target tugging versions and some were used as high-speed transports. In total, 7,781 Mosquitoes were built and they served with around 20 air forces worldwide.

It is difficult to compare aircraft, let alone choose a ‘best’. For instance, a 1945 aircraft will always be better than a 1940 one. And how does one compare a fighter with a transport aircraft? One doesn’t. Nevertheless, the Mosquito was beyond comparison. When the ‘Mossie’ flew for the first time, its performance exceeded and shocked even its own designers. The RAF did not know in which role to use this new aircraft, but simply knew it wanted it. In the end, it turned out to be great in all roles.

“It makes me furious when I see the Mosquito. I turn green and yellow with envy.” Although it cannot be verified that Hermann Goering, the head of the Luftwaffe, actually said these words, it perfectly sums up the Nazi desperation of being unable to intercept the Mossie. An unarmed aircraft flying over Berlin during broad daylight was nothing more than an insult to the Luftwaffe. To me, the de Havilland Mosquito was the best aircraft of the Second World War. 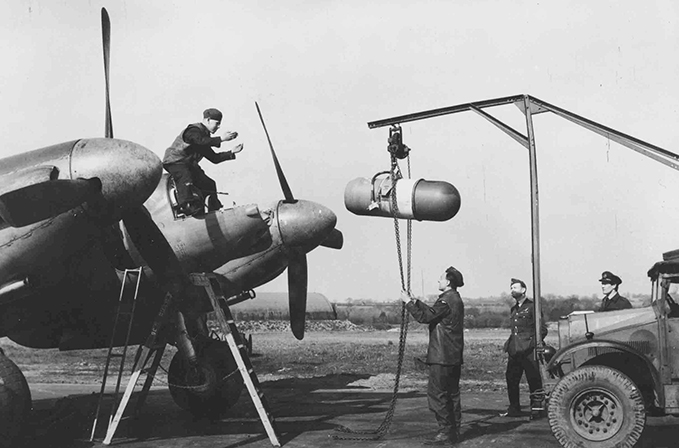 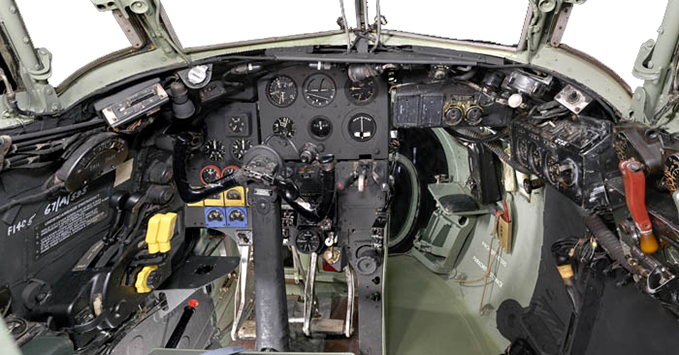 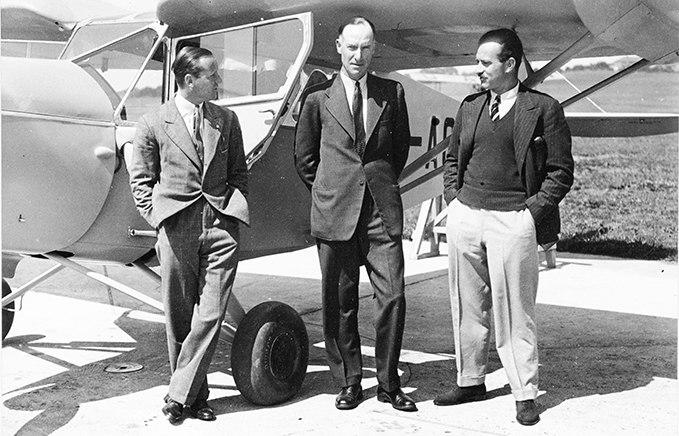 To all our followers, who would rather hear the story of another aircraft, we will soon organise another poll on our Facebook pages offering you to select another aircraft you would like to learn more about. Please keep your eyes peeled and choose you favourite.