28 February 2020 By Tim Bracey in Volunteering

My work with the Large Object Conservation Volunteer Team involves cleaning and inspecting the aircraft exhibited in the RAF Museum London. Whilst checking underneath a number of aircraft I found hidden away some ‘zaps’. These are slogans, badges, stickers etc that other air forces, or RAF Squadrons, place on other units’ aircraft, in the spirit of rivalry and humour. The use of zaps and similar antics is an aid to keep up morale and it typifies the humour that RAF squadrons are famous for.

Rivalry between units of the armed forces has been in existence for as long as armies have been around. The RAF in particular, with its units organised into squadrons, has had this competitive focus from its inception in 1918. Squadrons have always tried to outdo each other, prove that they are the best, playing tricks on each other and generally finding ways to outsmart their fellow units. By doing so they push each other to greater performance.

A good example of this was in the Second World War and the attack on the German battleship Tirpitz during Operation Catechism on 12 November 1944. The two units involved, No. 617 and No. IX (9) Squadron both claim – to this day! – to have sunk this giant ship. A bulkhead from the ship was presented to No. IX Squadron after the war and from then until 2001 the two units took turns in capturing the bulkhead and displaying it in their Squadron crew room. The competition was close to getting out of hand, so the RAF decided in 2002 that the bulkhead was to be presented to the RAF Museum London, where it is now on display in Hangar 5. 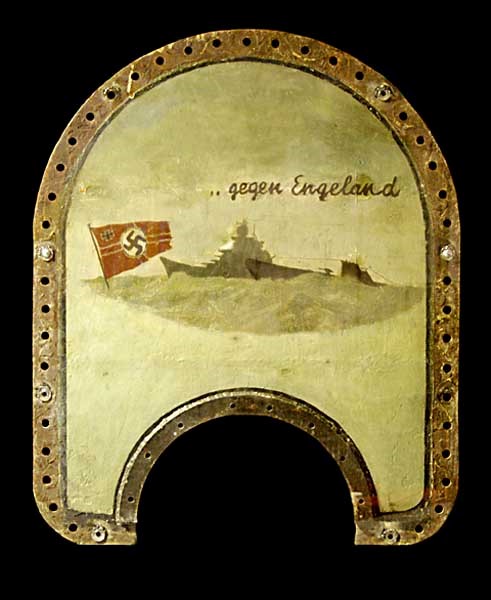 An example of this rivalry is some graffiti on the No. 617 Squadron Tornado that is on display in the Museum’s Hangar 6. Hidden in the main undercarriage bay, the words highlight No. IX Squadron’s claim to have sunk the Tirpitz. 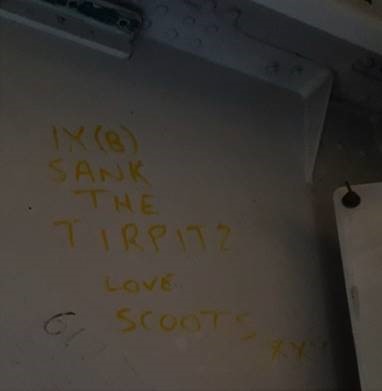 In some cases, zaps were quite large. A good example is this Kiwi bird which replaced the red part of the RAF roundel of an No. 101 Squadron Vulcan after a visit to New Zealand. 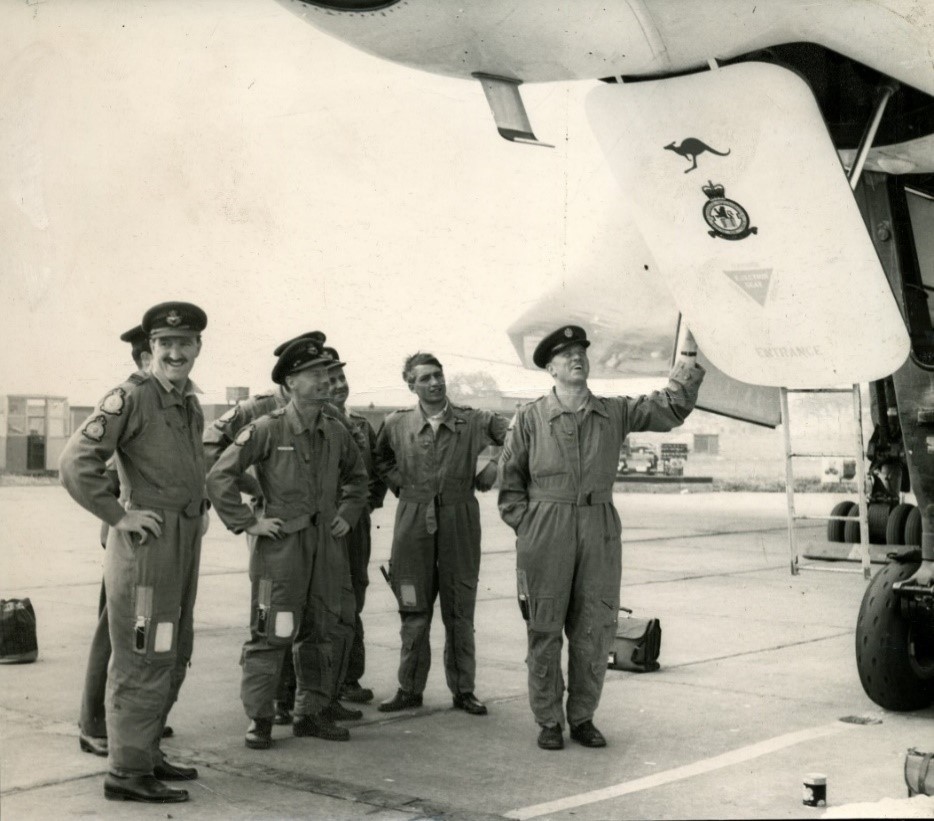 Possibly one of the biggest pranks took place when an RAF Harrier was painted pink by a French Air Force unit. 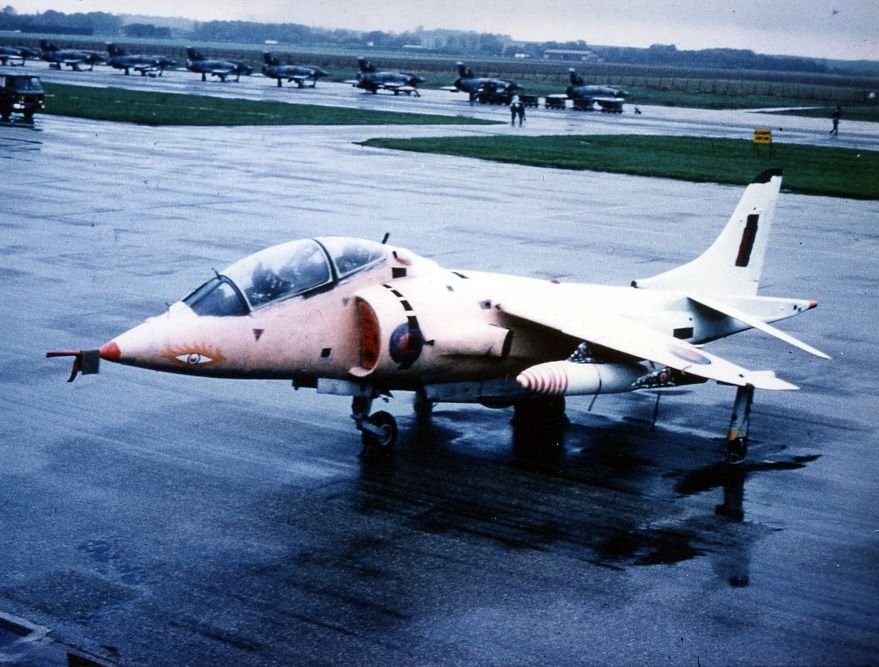 Most squadrons produced their own design of zap and they would be spread liberally around other units. They are usually in undercarriage bays, on doors and other out-of-the-way places. In some cases, there is also graffiti, added by ground, or flight crew. Here is a further selection of some of the Museum’s aircraft exhibits that I found:

Two American units, one of the US Air Force and one of the US Navy, left their zap in the main undercarriage bays of our Tornado: 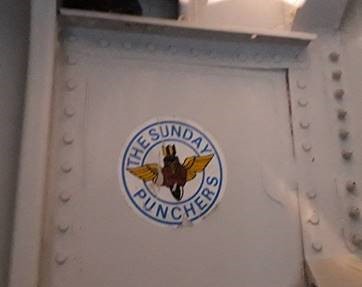 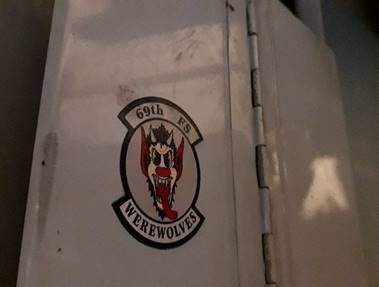 The Tornado Weapons Conversion Unit put up their sticker in the Tornado’s front undercarriage bay. 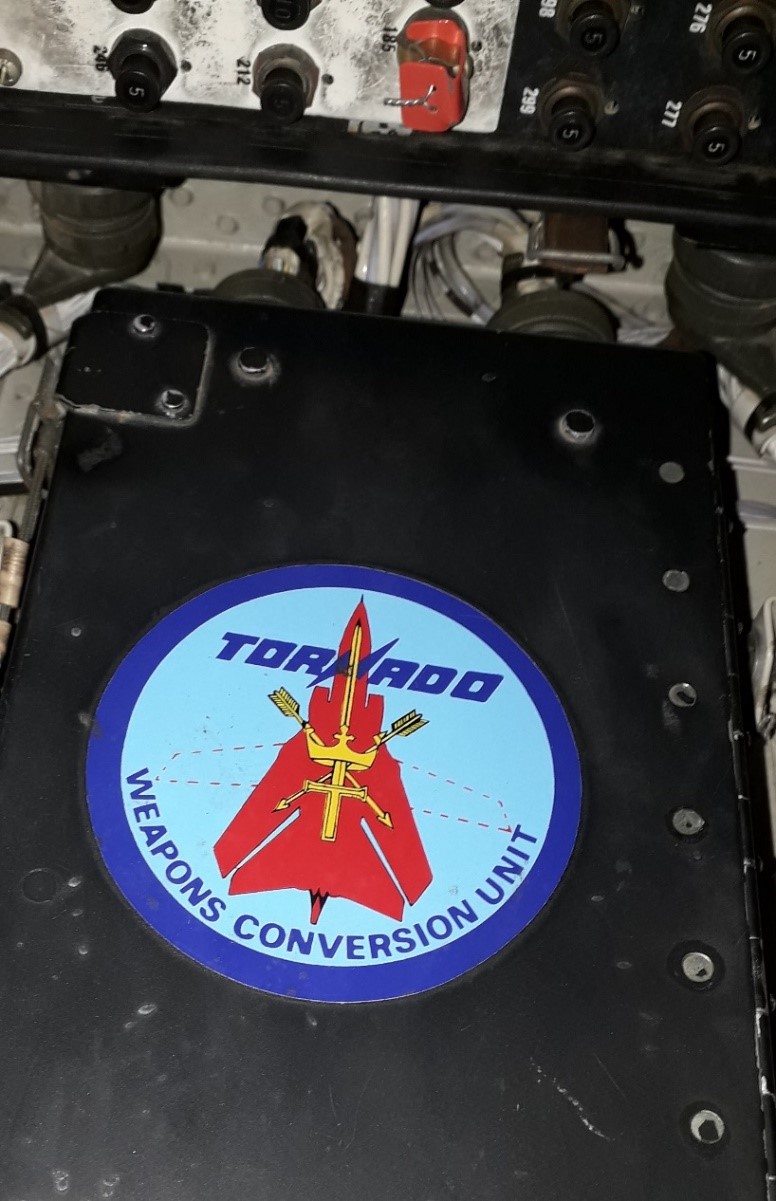 The Aircraft Recovery and Transportation Flight left their sticker in the under-nose laser designator. 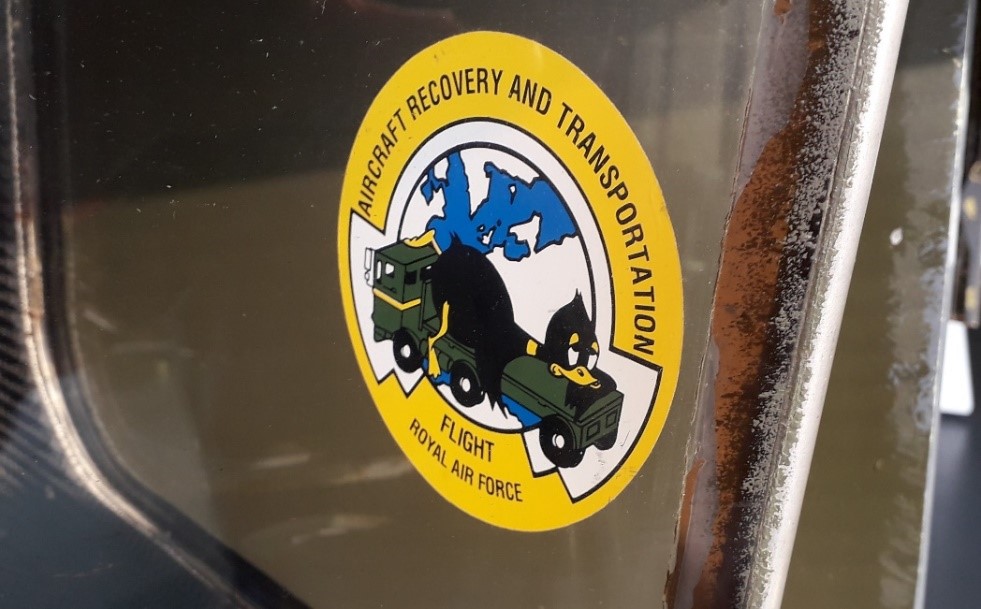 The Buccaneer was a bomber which was used during the First Gulf War. One of its main roles was to assist the Tornado by laser designating the target. Operating side by side, it meant that a Tornado squadron had the chance to leave their zap in the main undercarriage bay of our Buccaneer. RAF 17 (F) Squadron flew Tornados during the First Gulf War. 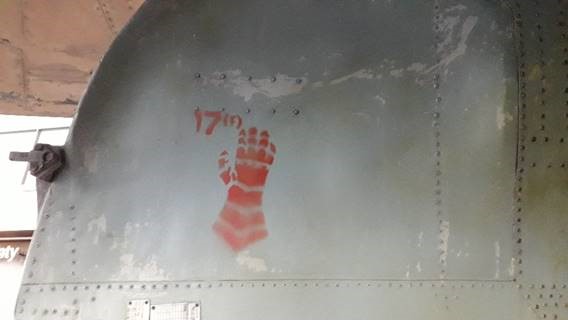 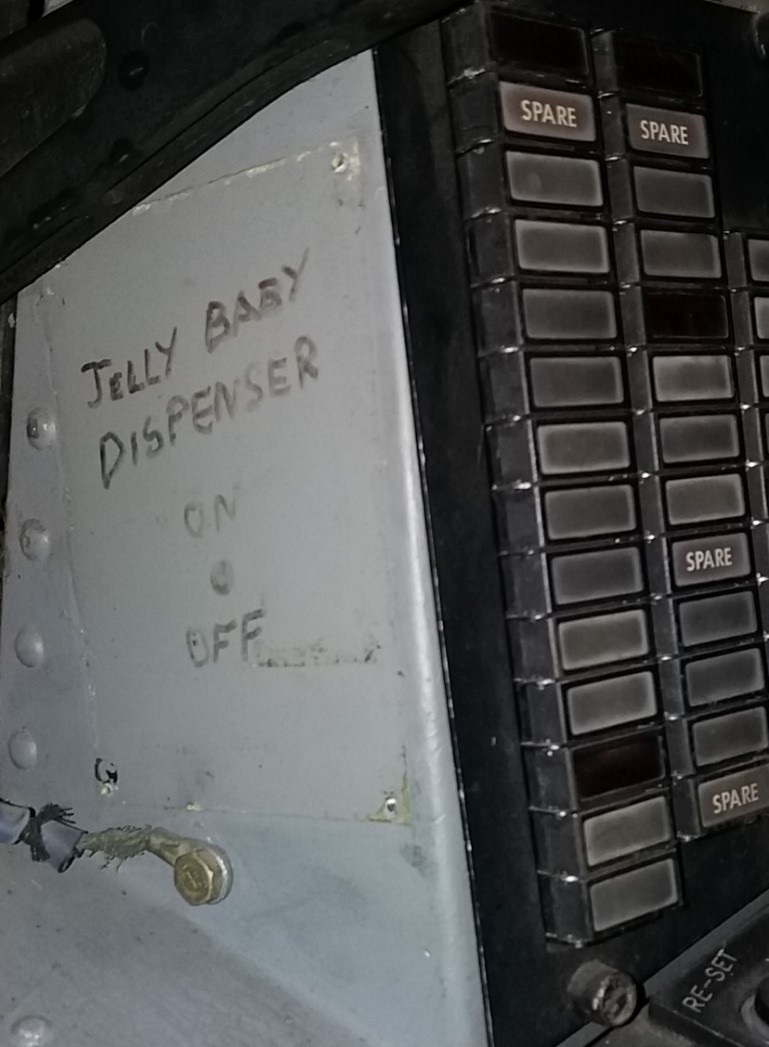 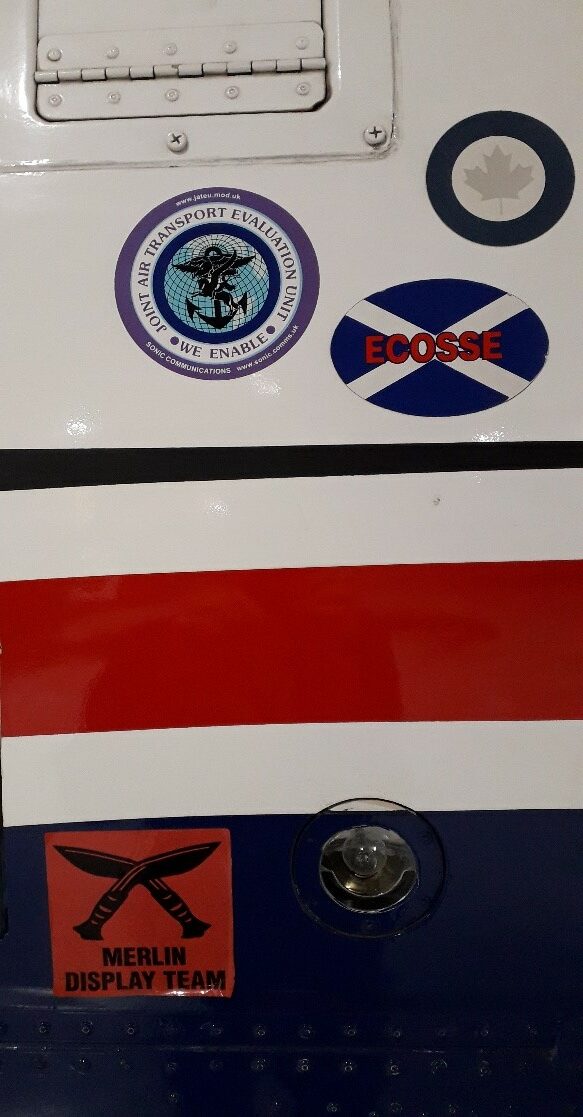 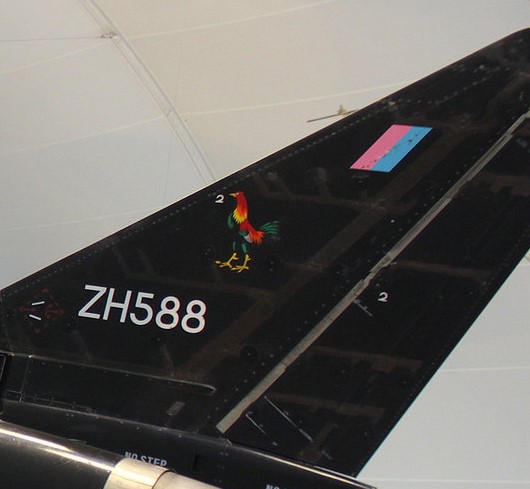 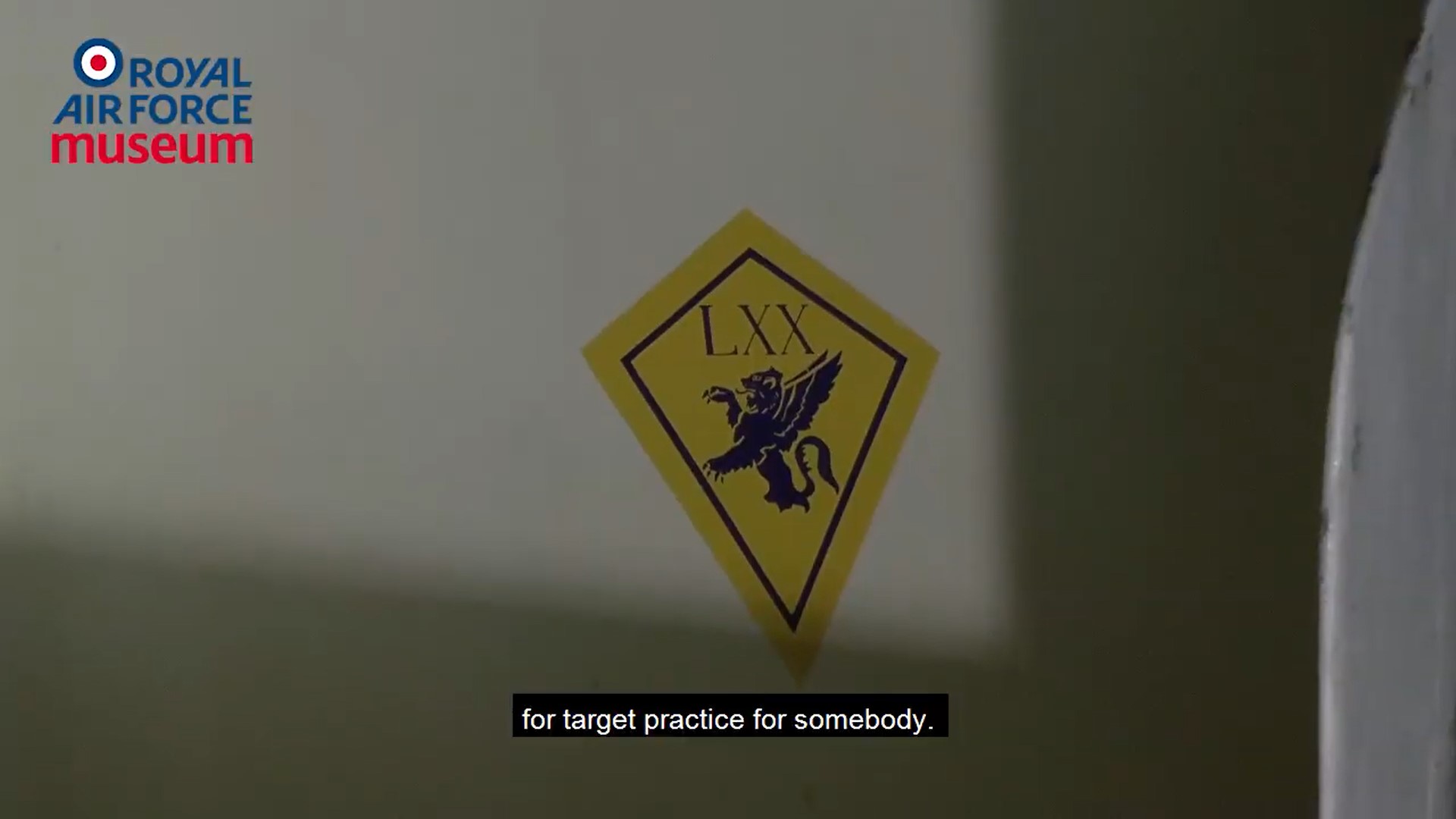 A very unusual zap on the unique urinal in the Lockheed Hercules. This photo is a still taken from the Under the Radar video on the Museum YouTube channel

David Herriot, a Buccaneer navigator, told me that when he was with No. 12 Squadron, the ground crew placed what must have been an eight foot dayglo orange fox’s mask on the front wall of the airmen’s mess during a detachment to Lossiemouth in the mid 1970s (a fox is on the Squadron crest). It could be seen from the main gate. The Commanding Office of the Lossiemouth base was not impressed, nor was their Office Commanding of the Police Flight, who they then baited with No. 12 Squadron zaps on notices that he placed in the officers’ mess demanding detachment commanders get their troops to desist. This story is also in David’s book ‘Adventures of a Cold War Fast-Jet Navigator, The Buccaneer Years’.

Zaps appear in all sorts of odd places – marquee roofs, ski-lift pylons, night club ceilings, pub walls, toilets, as well as usually on aircraft. The tradition of zapping things other than aircraft is less common these days, perhaps because we are less tolerant to what some members of the public might see as ‘litter’. Also the public may well see such antics as being somewhat frivolous and the perception could be that the members of our Armed Forces should be more serious and providing more value for the taxpayers money.

As a Volunteer at the RAF Museum London I have been privileged to get close to the many exhibits in the Museum and meet a number of RAF Veterans who have been able to tell me and others their amazing stories. Whilst being at the Museum I have been involved in giving talks, undertaking tours, supporting cockpit access events, cleaning and helping maintain the aircraft exhibits and assisting with Volunteer communications. Before joining the Museum I worked for British Airways and Heathrow Airport.