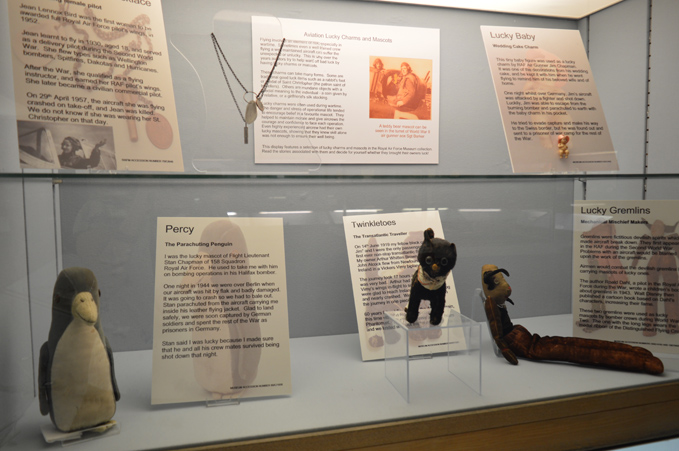 Flying involves an element of risk, especially in wartime. Sometimes even a well trained crew flying a well maintained aircraft can suffer the unexpected or unlucky. This is why over the years aviators try to help ward off bad luck by having lucky charms or mascots.

These charms can take many forms. Some are traditional good luck items such as a rabbit’s foot or medal of Saint Christopher (the patron saint of travellers). Others are mundane objects with a special meaning to the individual – a coin given by a relative, or a girlfriend’s silk stocking.

Lucky charms were often used during wartime. The danger and stress of operational life tended to encourage belief in a favourite mascot. They helped to maintain morale and give aircrews the courage and confidence to face each operation. Even highly experienced aircrew had their own lucky mascots, showing that they knew skill alone was not enough to ensure their well being.

The display at RAF Museum Midlands features a selection of lucky charms and mascots from our collection. Read the stories associated with them and decide for yourself whether they brought their owners luck!