During the First World War, four Indian volunteers – Lieutenants Shri Krishna Chanda Welinkar, Hardit Singh Malik, Errol Suvo Chunder Sen and Indra Lal Roy – served as fighter pilots with the Royal Flying Corps. In September 1917, Sen was shot down and became a prisoner-of-war; and over the next 10 months, Malik was wounded and Welinkar and Roy were killed. ‘Laddie’ Roy destroyed 10 enemy aircraft before he fell, and on 21 September 1918, he was posthumously awarded the RAF’s new Distinguished Flying Cross. Read more about them in my previous blog post on ‘South Asian Volunteers in the RAF – Part One’.

In the inter-war years, the idea of self-determination gained widespread support in British India. In keeping with this, a committee chaired by General Sir Andrew Skeen met at Simla, in August 1925, to investigate the ‘Indianisation’ of the Indian Army’s officer corps. The creation of a military academy equivalent to Sandhurst was also examined. The Skeen Committee reported in April 1927, and one of its recommendations was that Indian cadets be accepted for officer training at RAF Cranwell. The bravery of the RFC’s South Asian pilots was referenced in support of this, and veteran Hardit Singh Malik’s impressive appearance before the committee lent added weight. Discussions between the British and Indian governments continued until Lord Birkenhead, Secretary of State for India, approved the creation of an Indian Air Force on 5 April 1928. The new service would be open to men of all faiths and castes drawn from every part of the subcontinent.

The first six officer cadets – Subroto Mukerjee, HC Sirkar, Bhupendra Singh, Aizad Awan, Amarjeet Singh and Jagat Narain Tandon – began their training at RAF Cranwell in September 1930. The Indian Air Force came into being on 8 October 1932, and the six flight cadets were commissioned the same day. All qualified as pilots except ‘Titch’ Tandon who was too small to fly aeroplanes and instead became an Equipment Officer. Subroto Mukerjee was Indra Lal Roy’s nephew, and in 1954, he would become the first Indian to command the IAF.

No. 1 Squadron IAF was formed at Drigh Road, Karachi on 1 April 1933, and equipped with four Westland Wapitis. A desperate shortage of educated recruits meant that there were only enough technicians, or ‘Hawai Sepoys’ to form one flight; and the Squadron would not be at full strength until 1938. Most of the technicians had previously been employed in railway workshops.

In April 1936, No. 1 Squadron began flying reconnaissance, artillery spotting and ground attack operations against tribal insurgents on the North-West Frontier between India and Afghanistan. These operations proved cheap, effective and relatively bloodless compared to those mounted solely by ground troops. Aircrew, however, faced the likelihood of a grisly death if they were forced down and captured by the tribesmen. In 1939, an IAF Volunteer Reserve was formed with its pilots trained at civilian flying schools. These men were posted to five new coastal defence flights detailed to protect India’s main ports. The IAF entered the Second World War in September 1939 with only one full squadron, but although few in number, the existing units provided a basis for the rapid expansion of the Service.

In August 1940, 24 Indians were sent to the UK for pilot training with the intention of assessing ‘the fighting quality of Indian personnel under active service conditions.’ Eight of the Indians trained as fighter pilots, and began flying operationally in RAF squadrons after the Battle of Britain. One third of the 24 volunteers were killed in action. Pilot Officer Mahinder Singh Pujji, who flew Hurricanes with Nos. 43 and 258 Squadrons, is probably the best known of the group; and like HS Malik, he always wore his turban when flying. 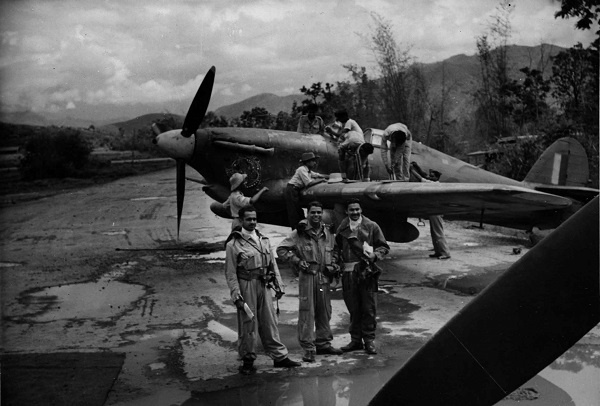 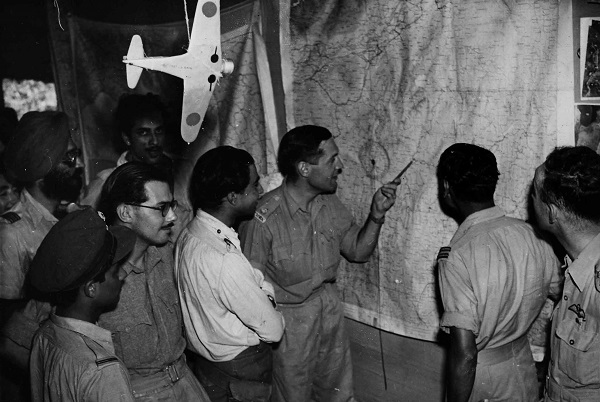 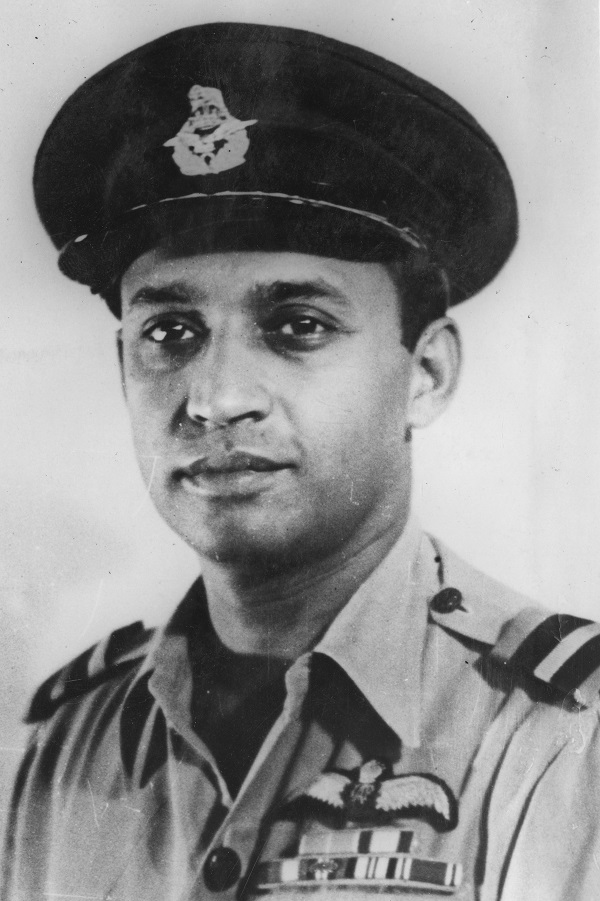 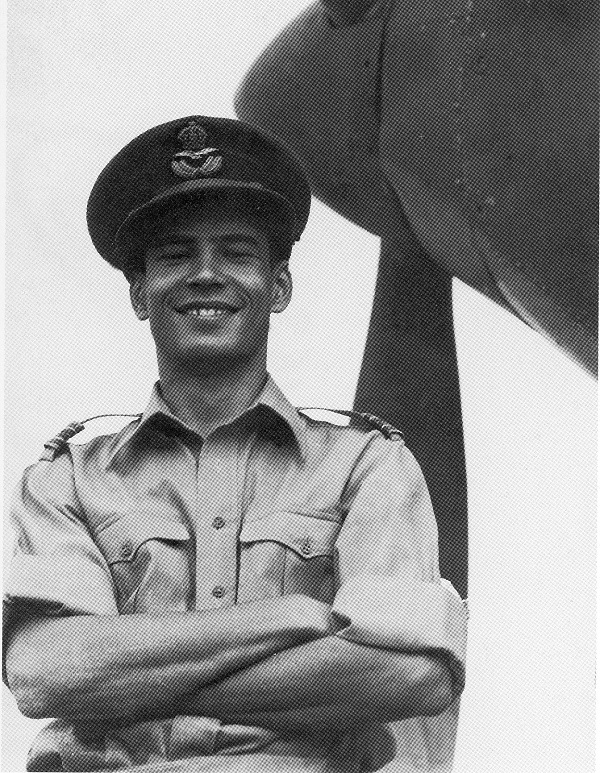 In addition to the 24, some 200 Indians resident in Britain volunteered to join the RAF and Women’s Auxiliary Air Force. One such volunteer was Sergeant Shailendra Eknath Sukthankar, who served as a navigator with No. 83 Squadron. Sukthankar was commissioned as an officer, and on 14 September 1943, received the DFC. Squadron Leader Sukthankar eventually completed 45 operations, 14 of them on board the RAF Museum’s Avro Lancaster R5868. Another volunteer was Assistant Section Officer Noor Inayat Khan, a Muslim pacifist and Indian nationalist who joined the WAAF, in November 1940, to fight against Nazism. Noor Khan served bravely as a secret agent with the Special Operations Executive (SOE) in France, but was eventually betrayed and captured. Executed at Dachau concentration camp on 13 September 1944, Noor Inayat Khan was posthumously awarded the George Cross in 1949, for her outstanding, and sustained, moral and physical courage. 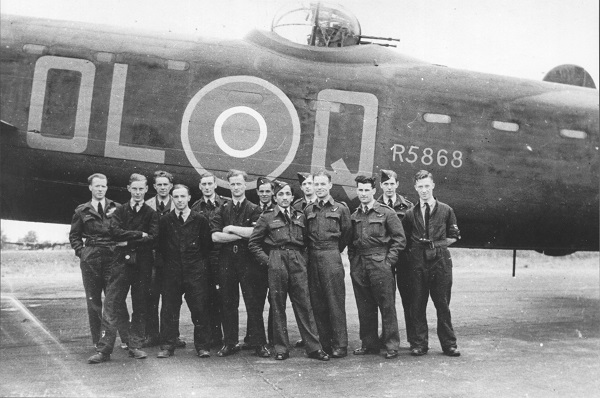 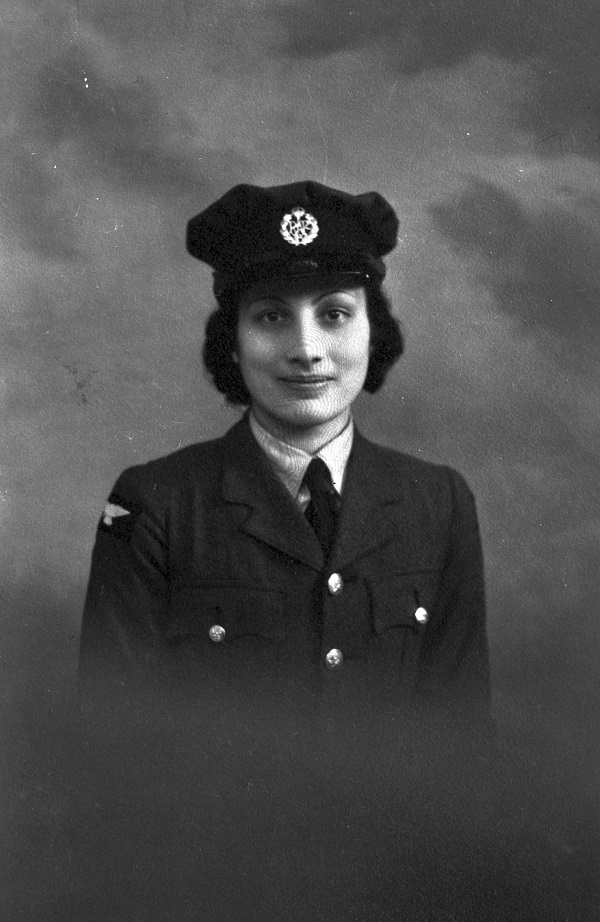 In December 1941, the war in the Pacific broke out, and the British, American and Dutch possessions in South East Asia were swiftly overrun by the Japanese army. India and Australia were also vulnerable to invasion. No. 1 Squadron IAF was sent to fly tactical reconnaissance operations from Toungoo in Burma (Myanmar) on 1 February 1942. The airfield was promptly attacked by Japanese bombers, but the Squadron’s Lysander army co-operation aircraft had been intelligently dispersed and there were no losses. Squadron Leader Karun Krishna Majumdar decided to retaliate next day, ordering his men to attach two 250 lb (113 kg) bombs to his aircraft before single-handedly attacking the Japanese air base in Thailand. ‘Jumbo’ Majumdar destroyed a hangar and the aircraft inside it, and on 3 February, he led the Squadron’s 12 Lysanders on a second successful raid on the Japanese base. Majumdar was later awarded the DFC and became the first Indian promoted to wing commander. He would go on to fly photographic reconnaissance missions with the RAF in Europe in the summer of 1944, winning a bar to his DFC. An inspirational leader and a superb pilot, Wing Commander Majumdar would lose his life in a flying accident near Lahore on 17 February 1945.

The Japanese offensive in Burma proved relentless, and after its brave rear-guard action, No. 1 Squadron was withdrawn to India. On the way, Flying Officer Haider Raza became separated from the unit, but fought on alone, bombing and machine-gunning the Japanese invaders for two weeks. At one point he signalled headquarters, saying:
‘This one-man guerrilla war is great fun, but I only have one shirt and one pair of shorts and that isn’t enough for two weeks in the jungle.’

Realising that Raza had been temporarily forgotten, his superiors ordered him to fly back to India, where the young pilot was mentioned in despatches. Raza was a Muslim, and after partition, in August 1947, he would become a founder member of the Pakistan Air Force, rising to the rank of air vice-marshal.

Lieutenant Errol Sen, who had flown with the RFC during the First World War, was in Burma at the time of the Japanese invasion. Unable to find transport out of the country, the veteran pilot decided to walk back to India and was never seen again.

In India, No. 1 Squadron began converting to the rugged and reliable Hawker Hurricane in June 1942; and over the next twelve months Nos. 2, 4 and 6 Squadrons were formed and also equipped with the type. Two more units, Nos. 7 and 8 Squadrons, were raised in 1943 and given American Vultee Vengeance dive bombers. Between March and December 1942, 10 new flying schools were established in the subcontinent and the first North American Harvard trainers appeared. The IAF kept a watchful eye on the North-West Frontier, and the skills it honed against the tribesmen were soon being used by its squadrons against the Japanese.

The IAF in Burma operated in the tactical role, conducting reconnaissance, ground-attack and army co-operation missions in support of 14th Army from September 1943. IAF squadrons fought alongside the RAF throughout the campaign, and a typical Indian unit might include Hindus, Sikhs, Muslims and Christians as well as seconded British airmen. They worked well together, and an official publication described the Indian pilots as:
‘a curiously interesting body of men — boyish, high-spirited and sometimes bohemian in appearance, yet as fighters, they are resourceful, courageous and in deadly earnest about the job in hand.’

The Indian Hurricane squadrons performed particularly well on the Arakan front in 1944, flying low over the jungle to surprise the enemy and obtain accurate information. They continued to act as ‘the Eyes of the Army’ even during the treacherous monsoon storms that lasted from May to October. Mahinder Singh Pujji, now commanding No. 4 Squadron, was awarded the DFC in April 1945 for providing invaluable details of enemy troop movements throughout the previous year’s rainy season. 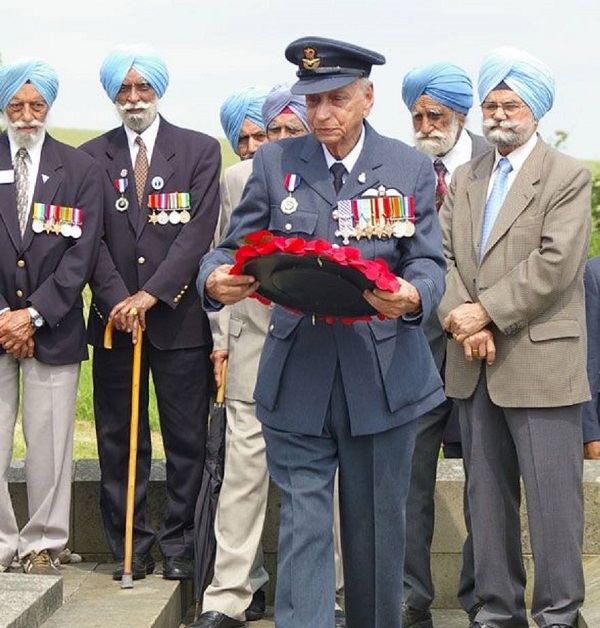 Although the Hurricane pilots were instructed to avoid air combat and focus on their vital reconnaissance duties, Flying Officer Jagdish Chandra Verma of No. 6 Squadron shot down a Japanese Nakajima ‘Oscar’ fighter on 15 February 1944. Verma was the only IAF pilot to claim an air-to-air victory in Burma and, as the Hurricane was markedly inferior to the Oscar, he was immediately awarded the DFC.

Working in appalling conditions, and under constant threat of attack by Japanese troops, Indian ground crews in Burma managed to keep the IAF’s aircraft flying. Furthermore, their efficiency, skill and capacity for hard work made for exceptionally high rates of serviceability. Throughout the Burma campaign Indian airmen became known for their courage and professionalism both in the air and on the ground; and in recognition, the Indian Air Force was granted the prefix ‘Royal’ on 12 March 1945.

By VJ Day, the RIAF was 25,000 strong and was based around nine highly efficient squadrons of Hurricanes and Spitfires. During the war, its pilots flew over 16,000 sorties spread over 24,000 operational flying hours. In addition to decorations awarded to Indians serving with the RAF overseas, RIAF personnel received one Distinguished Service Order (DSO), 22 DFCs and one Bar, two Air Force Crosses (AFCs), 45 Mentions in Despatches and numerous other distinctions. Sadly, a total of 688 airmen were killed in combat or in accidents, 231 died in the field and 367 were wounded.

Between 1939 and 1945, the Indian Armed Forces attracted 2.5 million men and women, and this is comfortably the largest all-volunteer force in history.

With partition in August 1947, the assets of the Royal Indian Air Force were divided between the new states of India and Pakistan on a basis of 7:3, leaving Pakistan with two fighter squadrons and a transport unit. The Royal Air Force Museum displays a Hawker Tempest II and a Consolidated B24 Liberator at its London site, both of which were flown by the RIAF in the post-war years. 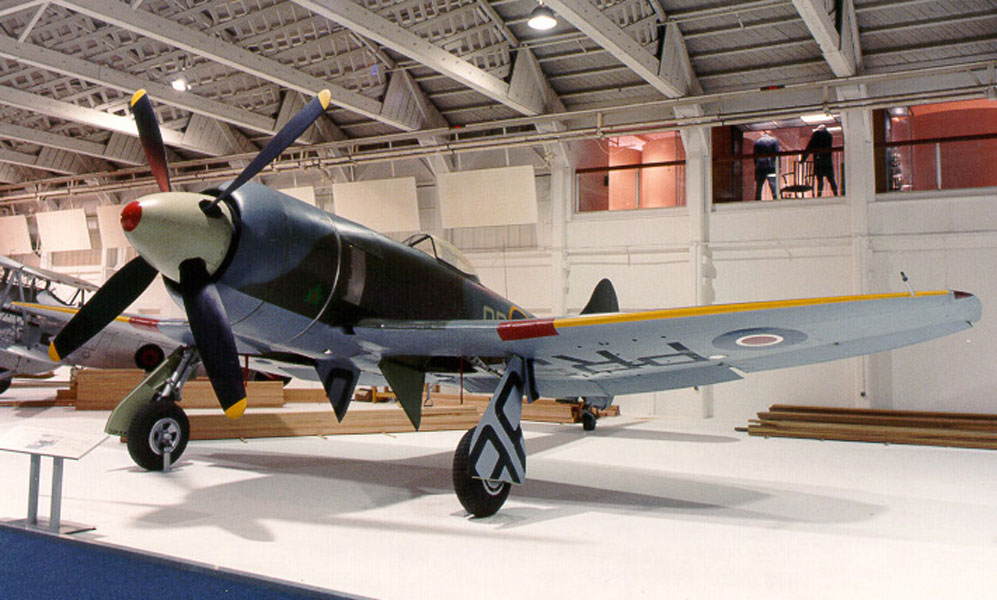 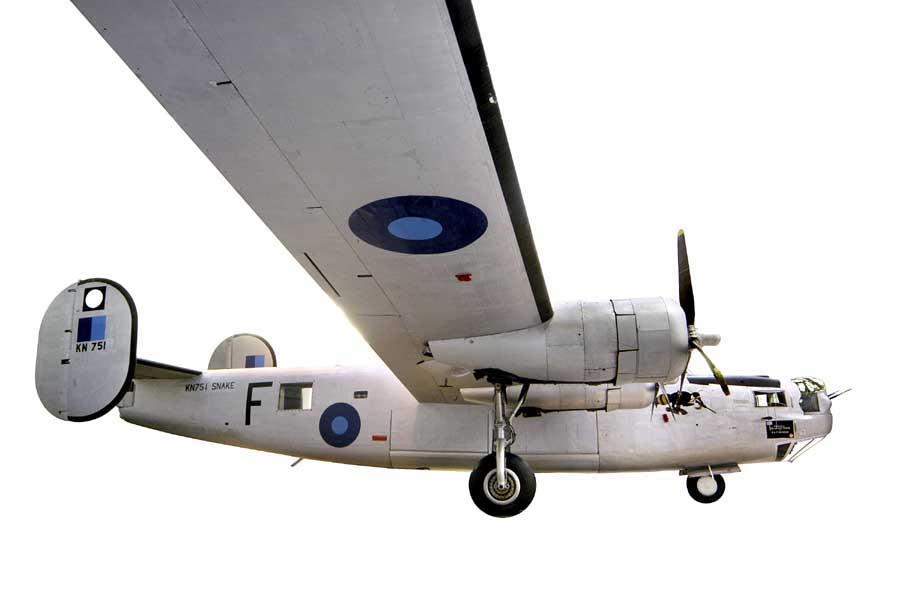 ‘The story of the Pakistan Air Force: A Saga of Courage and Honour’ (Shaheen Foundation, 1988)