The Museum was recently contacted to see if we could substantiate whether an RAF airman had survived falling from his aircraft without a parachute by landing in snow. “That sounds unlikely”, I thought, like an urban legend. It couldn’t really have happened, could it? As it transpired, the airman in question had in fact been lucky enough to have the use of his parachute, but my research did lead me to the amazing tale of Flight Sergeant Nicholas Alkemade… 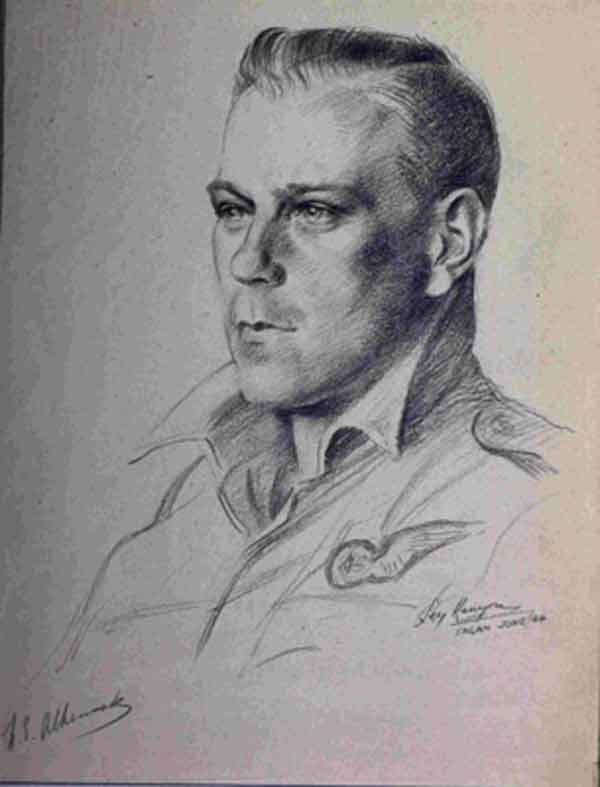 Nicholas Stephen Alkemade was born on 10 December 1922 in North Walsham, Norfolk and was a market gardener in Loughborough before the outbreak of war. After training as an Air Gunner, he was posted to No. 115 Squadron as a rear gunner on their Avro Lancasters.  After successfully completing 14 operations, Alkemade’s crew were detailed to raid Berlin on the night of 24/25 March 1944. One of 811 aircraft destined to attack the German capital, Alkemade’s aircraft, DS664, a Lancaster Mk II coded A4-K and christened Werewolf by its crew, took off from RAF Witchford, Cambridgeshire at 18:48 and set course for Berlin.

Werewolf carried her seven crew members to Berlin on time and as planned, but the return journey was to be a different story. An unusually strong north wind blew many of the returning aircraft far to the south of their intended track and Werewolf was pushed towards the Ruhr with its heavy concentration of anti-aircraft defences.

Shortly before midnight on 24 March, a Junkers Ju 88 night-fighter flown by Oberleutnant Heinz Rökker of Nachtjagdgeschwader 2, intercepted Werewolf and attacked from beneath with cannon and machine-guns. Werewolf’s starboard wing and fuselage were shredded and erupted into flames which streamed back beyond Alkemade’s rear turret, the Perspex glazing from which had also been completely blown out, exposing him to the frigid night air. The fight was not totally one-sided, Alkemade managing to get off a burst at the enemy with his four machine-guns, though reports of damage to Werewolf’s sailant proved wide of the mark. 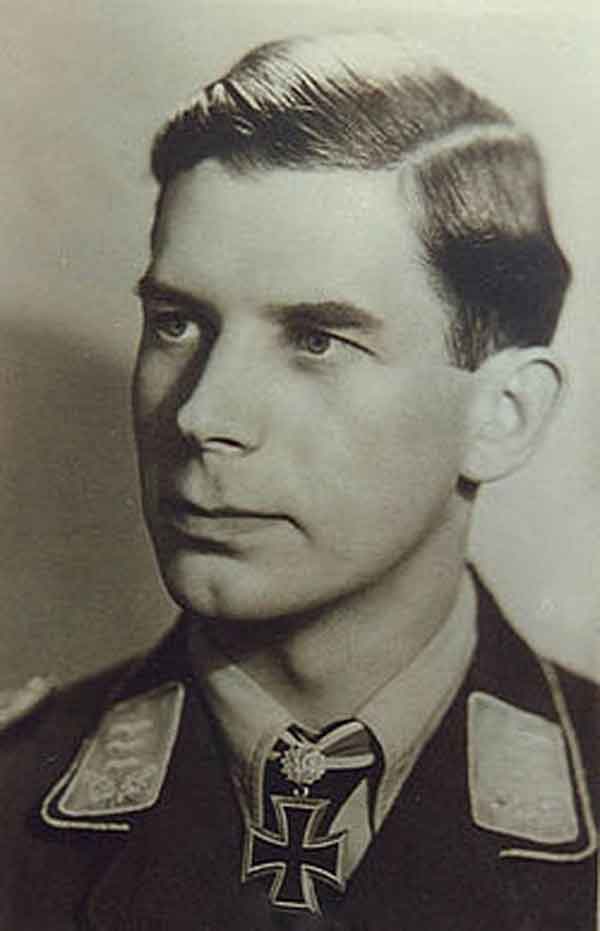 The brief combat had mortally wounded Werewolf, and before long FS James Arthur Newman, Werewolf’s pilot, ordered the crew to take to their parachutes. A Lancaster’s rear turret was too cramped for the gunner to wear a parachute. Instead it was stored in a canister in the rear fuselage, to be clipped-on to a chest harness when needed. 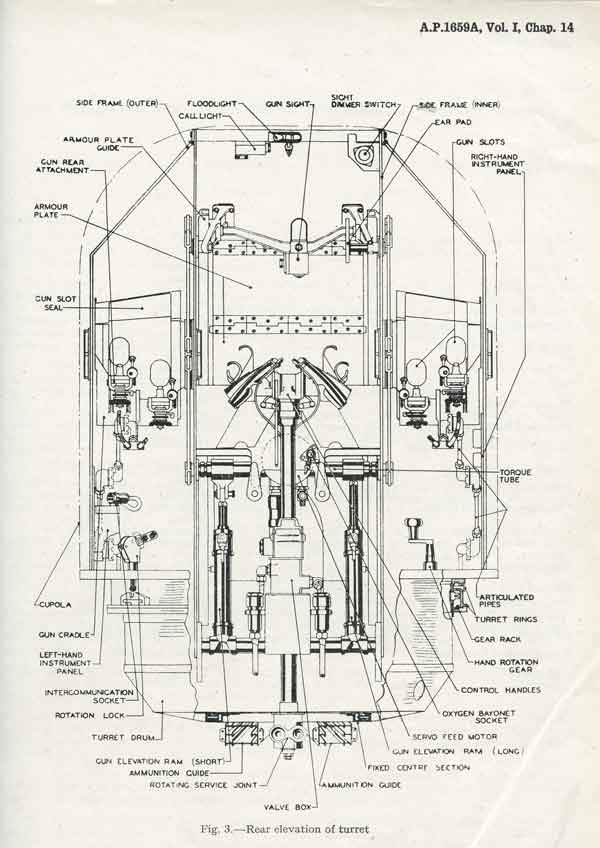 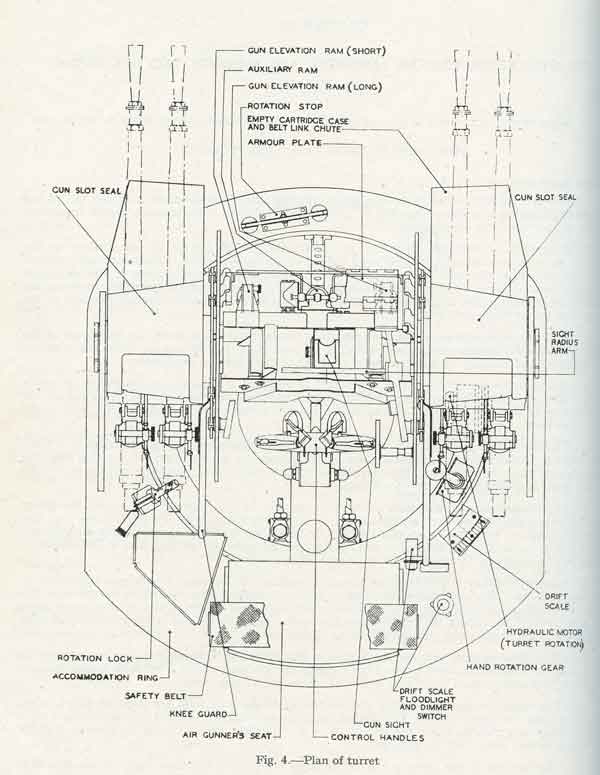 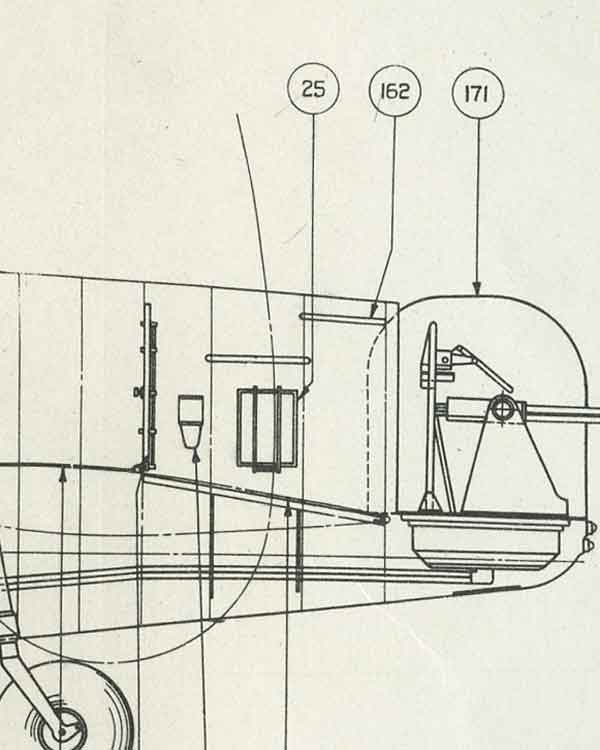 Centring his turret and opening the doors, Alkemade was greeted by a vision of hell. His parachute was already well alight and the fierce flames seared his exposed face and wrists. His rubber oxygen mask, clamped tight over his mouth and nose began to melt.

The immense heat forced Alkemade to close the turret doors again. He was trapped. Falling through the sky in a burning and abandoned aircraft. 3.5 miles above enemy territory. And it was about to get worse. The conflagration devouring the aircraft now breached the rear doors and set the turret’s hydraulic fluid alight. The liquid-fuelled flames spread to Alkemade’s clothing. What could have been going through his mind? I’ll let him tell you:

‘I had the choice of staying with the aircraft or jumping out. If I stayed I would be burned to death – my clothes were already well alight and my face and hands burnt, though at the time I scarcely noticed the pain owing to my high state of excitement…I decided to jump and end it all as quick and clean as I could. I rotated the turret to starboard, and, not even bothering to take off my helmet and intercom, did a back flip out into the night. It was very quiet, the only sound being the drumming of aircraft engines in the distance, and no sensation of falling at all. I felt suspended in space. Regrets at not getting home were my chief thoughts, and I did think once that it didn’t seem very strange to be going to die in a few seconds – none of the parade of my past or anything else like that.’

Falling head-first, looking back towards the stars twinkling in the night sky, FS Alkemade, serenity itself, hurtled towards the ground at 120 mph. At some point in the descent, Alkemade lost consciousness, possibly his body’s reaction to the pain where the flames had licked around his skin. Above him, Werewolf exploded.

Three hours later, Alkemade opened his eyes. He was lying on snowy ground in a small pine wood. Above him the stars were still visible, only this time they were framed by the edges of the hole he had smashed through the tree canopy. Assessing himself, Alkemade found that he was remarkably intact. In addition to the burns and cuts to the head and thigh, all received in the aircraft, he was suffering only bruising and a twisted knee. Not a single bone had been broken or even fractured. Both of his flying boots had disappeared, probably torn from his feet as he unconsciously struck the tree branches. Being of no further use, Alkemade discarded his parachute harness in the snow. 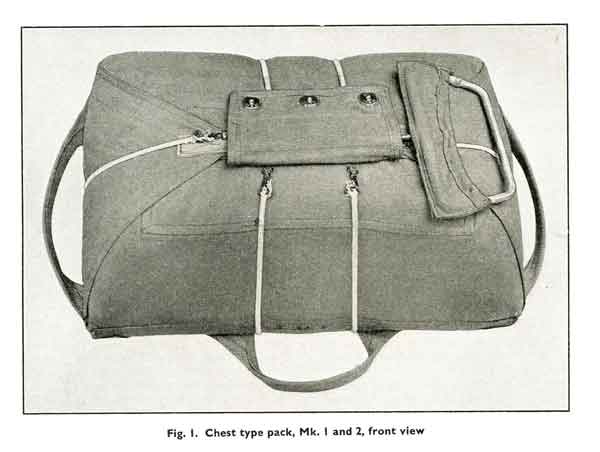 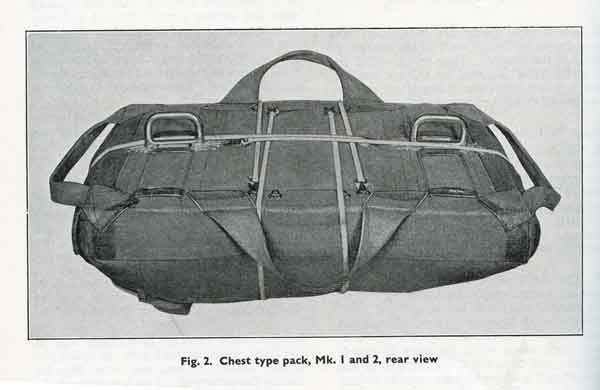 Lighting a cigarette from the pack kept in his Irvin suit, Alkemade surveyed his landing zone. The snow was but 18 inches deep and had been sheltered from the sun by the pine trees. Just 20 yards away was open ground completely devoid of snow. If he had come down there, nothing would have saved him. As it was, the flexible branches of the young pines had slowed Alkemade’s descent, just enough for the mattress of snow to cushion him as he reached the ground.

Unable to walk and freezing cold, Alkemade blew his distress whistle to attract attention. A band of German civilians, possibly Home Guardsmen, carried him to a local infirmary which sent him to the better facilities of Meschede hospital.  His burns were tended and a quantity of Perspex and wooden splinters were removed from his body.

The next day, Alkemade was interrogated, the Gestapo demanding to know what had happened to his parachute. When he told them he hadn’t used one, the interrogators laughed at Alkemade and accused him of being a spy and burying it. Indignantly Alkemade challenged the Gestapo to find his discarded harness – the lift webs, which would unclip and extend when the parachute deployed, would still be in the stowed position. A search of the wood soon bore out Alkemade’s story. Further corroboration came from the wreckage of Werewolf which had crashed 20 miles away. The metal ripcord handle and cable of his parachute were still in their stowage container.

Alkemade’s experience made him into a minor celebrity among the Prisoner of War fraternity. After spending three weeks in hospital he was sent to the Dulag Luft prisoner of war transit centre. Here the prisoners were paraded and regaled with the incredible tale of Alkemade’s survival by a Luftwaffe officer. He was even provided with a commemorative certificate stating:

“It has been investigated and corroborated by the German authorities that the claim of Sergeant Alkemade, No. 1431537, is true in all respects, namely, that he has made a descent from 18,000 feet without a parachute and made a safe landing without injuries, the parachute having been on fire in the aircraft. He landed in deep snow among fir trees.

Alkemade was photographed for the German press before being sent to Stalag Luft III in Poland. Here his story earned him extra cigarettes in return for inscribing prisoners’ Wartime Logs. Fellow prisoner Flt Lt Bennett Ley Kenyon also produced a portrait of Alkemade. 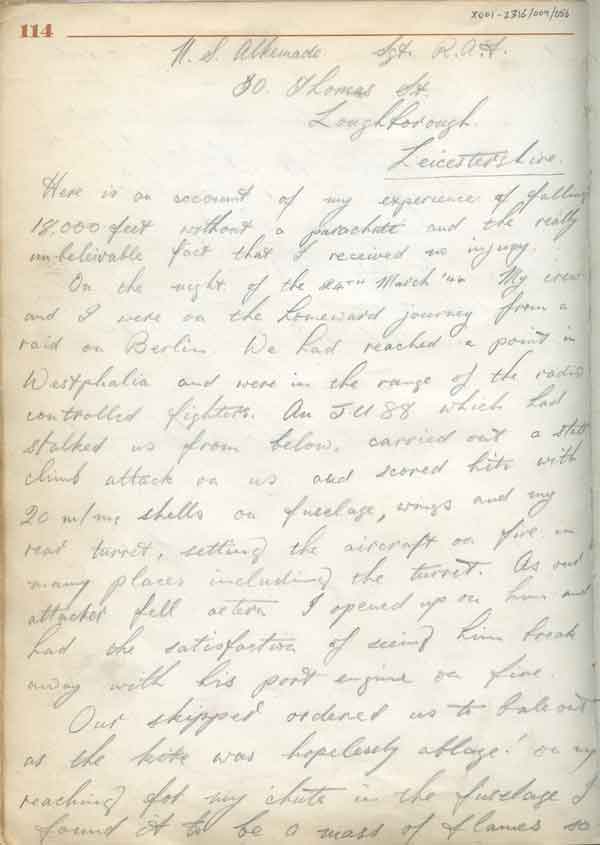 Ley Kenyon, Alkemade and the other inmates of Stalag Luft III would all later be among the tens of thousands of Allied Prisoners of War forced to march westward, some pulling possessions on hastily-crafted sledges, through blizzard conditions and on little food, so the Germans could prevent their liberation by the advancing Russians. The “Long March”, as these evacuations are now collectively known, would claim the lives of hundreds of men unable to survive the cold, exhaustion, hunger and tragic incidents of friendly fire by roving Allied aircraft. Somehow Alkemade made it through to be liberated, still the snow watched over him.

But what of the rest of Werewolf’s crew? Alkemade was just one of seven aboard the Lancaster when Rökke struck. As things transpired, he would be one of only three survivors. Sgt John P. Cleary (Navigator) and Sgt Geoffrey R. Burwell (Wireless Operator) both also become prisoners of war after being forcibly ejected from Werewolf by the explosion. Sgt Cleary’s damaged parachute self-deployed during his descent into the same wood as Alkemade and he was knocked unconscious in a collision with a tree trunk. Exposed to the crippling cold, Cleary nearly lost a leg to frostbite as well as enduring a collapsed lung. He spent the next six months in Meschede hospital, before being repatriated as part of an exchange of sick and wounded prisoners in February 1945. 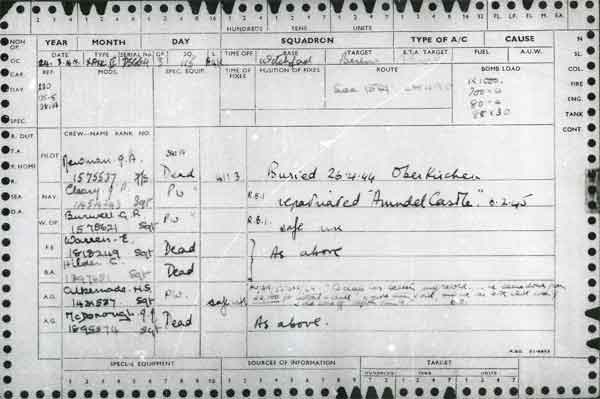 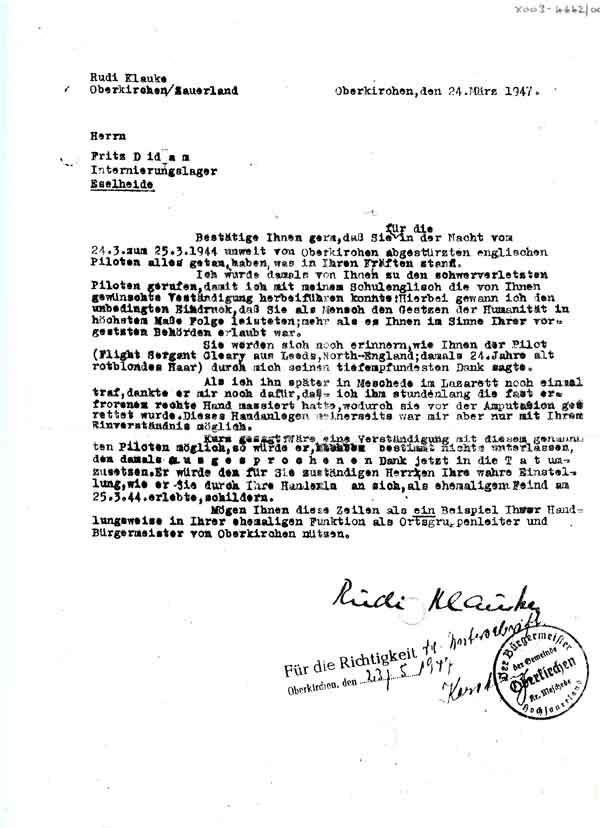 After discharge from the RAF in 1946, Alkemade returned to Loughborough, finding work in a chemical plant. Not long after starting his new job, he again cheated death. While removing chlorine gas-generating liquid from a sump, he received a severe electric shock from the equipment he was using. Reeling away, his gas mask became dislodged and he began breathing in the poisonous gas. An agonising 15 minutes were to pass before his appeals for aid were answered and he was dragged to safety, nearly asphyxiated by the fumes.

Not long after, a siphoning pipe burst, spraying Alkemade’s face and arms with industrial sulphuric acid. With astounding presence of mind, he dived head-first into a nearby 40 gallon drum of limewash, thereby neutralising the acid. Alkemade ‘escaped’ with first degree burns. Returning to work, Alkemade was pinned beneath a nine foot long steel door runner that fell from its mountings as he passed by. Somehow only minor bruising resulted.

After this third incident even Alkemade thought that enough was enough, becoming a furniture salesman with Clemersons Limited in Loughborough, where he lived with his wife and children. He passed away, much later than he might otherwise have done, in June 1987.

Archive collection of material relating to Sgt John P. Cleary’s experience as a Prisoner of war and later return to Germany. RAF Museum Object No. X003-4642

I have been curious about the past since childhood, leading me to gain university qualifications in both archaeology and archives and to work at the RAF Museum since 2001. I am particularly fascinated by the unusual, obscure, bizarre and esoteric – or ‘the cul-de-sacs of history’ as I term them! My current role involves working with all aspects of the Library and Archives collections, as well as answering enquiries and writing exhibition texts.