Today is not only the start of our Vulcan Challenge, which we invite you to be a part of, 14 January is also the anniversary of the delivery of the last Vulcan delivered to the RAF. On this day in 1965 the 134th Vulcan was taken into service. Two had been prototypes, 45 were of the earlier B1 design and 89 were improved B2 models.

The most distinctive aspect of the Vulcan is undoubtedly its large triangular ‘delta’ wing. The delta wing has been a common design feature for combat aircraft ever since but back in the 1950s this was considered revolutionary and somewhat risky. The tailless delta, that is without a horizontal tail plane, had been a theoretical model in aeronautics for a while as it promised a combination of low drag, lightweight structure and room for internal fuel.

German engineer Alexander Lippisch in Germany was the first to build such a triangular wing and in 1931 he flew the first tailless delta plane. During the Second World War, he designed several delta wing fighter and bomber aircraft although none were ever built. Beside the delta wing aircraft, he also designed the world’s first and only operational rocket fighter. The Me 163 Komet was the fastest aircraft in the world. A rare example is on display at the RAF Museum Cosford. After the war the advanced German aeronautical ideas and technology were eagerly studied by the victorious Allies. Even Lippisch himself was hastily brought to the US, where he was recruited by Convair, a major aircraft manufacturer.

Avro, together with Vickers, Short Brothers and Handley Page, was asked to design a new strategic bomber aircraft under Specification B.35/46. It had to meet the following requirements:

– be able to carry a large weapon load

– be able to operate at great heights

– able to be used anywhere.

Avro’s team under the leadership of the designer of the Lancaster, Roy Chadwick, realised that this would not have been possible with a conventional design. They quickly adopted the Lippisch delta wing configuration. The new aircraft would have a leading edge at an angle of 45° and the four most powerful turbojet engines available.

To help gain data for the radical new design, one-third scale model ‘mini-Vulcans’ were built. These were the Avro Type 707s. The first 707 flew in 1949 and although the first prototype crashed and killed its test pilot, they proved the validity of the Avro design. The RAF Museum has a 707C in its collection. This is WZ744, the only two-seater variant, meant to train pilots for the single-seat 707s. The RAF Museum is looking for a partner to take over WZ744 which hopefully will lead to it returning to public display soon. 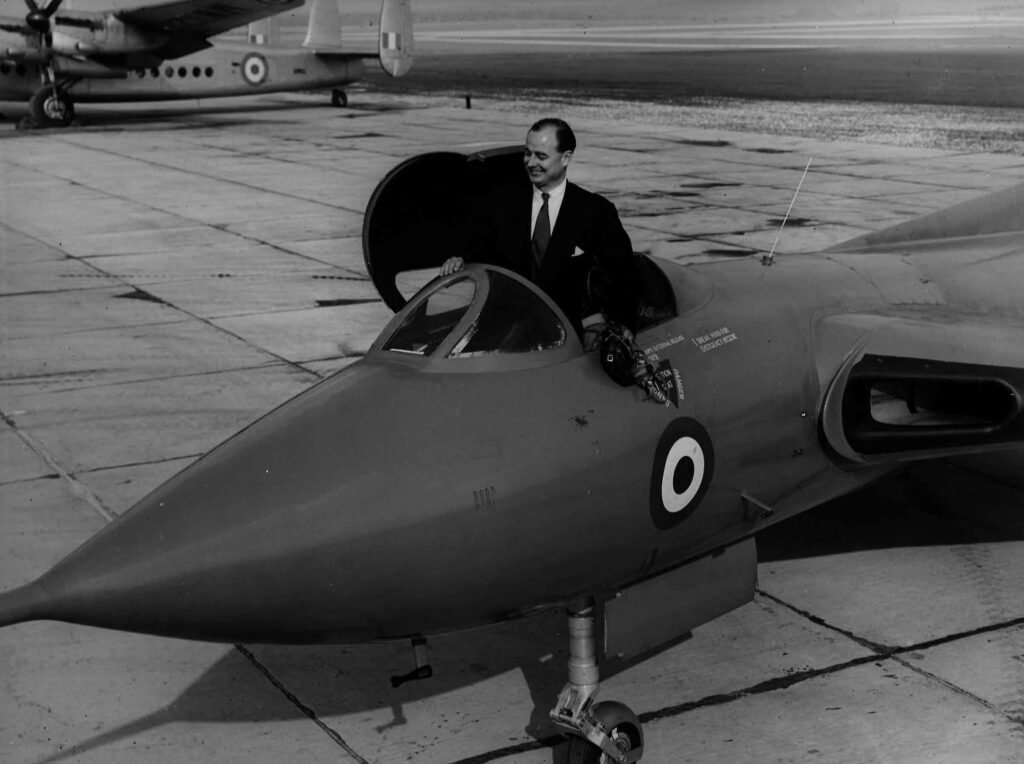 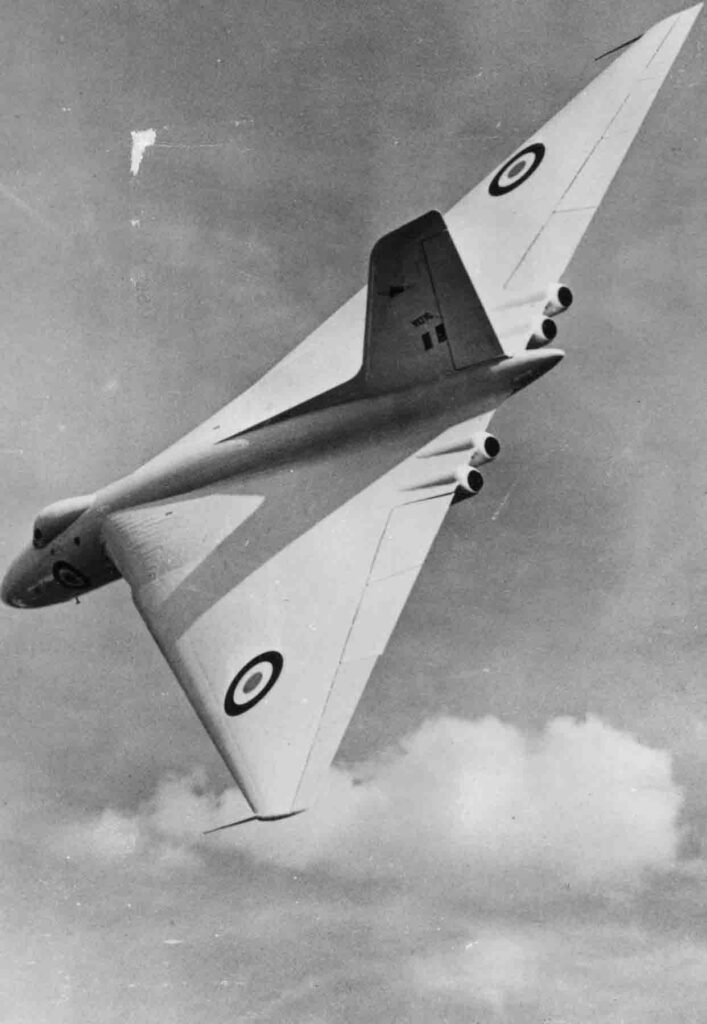 The first Vulcan flew on 30 August 1952, watched by Avro employees and a small band of press. The gloss white painted VX770 was fitted with an ejection seat for the pilot, a conventional control wheel, powered by four Rolls-Royce Avon engines, but I did not yet have its wing fuel tanks installed. A temporary tank was carried in the bomb bay.

The aircraft was flown by Wing Commander Roly Falk, who had been the Chief Test pilot at the Royal Aircraft Establishment in Farnborough where he flew around 300 different aircraft. In 1950, he joined Avro and in subsequent years he demonstrated the Vulcan at the annual Farnborough air show, where in 1955 he amazed the crowd by barrel-rolling the Vulcan across the airfield. He was rebuked by the organisers for this manoeuvre, but only because performing aerobatics in an aircraft weighing 69 tons and with a 99-foot wingspan was ‘not the done thing’.

At Falk’s suggestion, a fighter-style control stick replaced the control wheel. Falk was famous for flying in a pin-striped lounge suit, tie, pocket handkerchief and often sunglasses. Find out more about Falk and other test pilot in the excellent blog post by Museum Volunteer Tim Bracey.

The test flights by Falk and his fellow test pilots revealed that the Vulcan’s wing, at higher speeds, was suffering from buffeting during manoeuvres. It necessitated a partial re-design. The production B1 gained a kinked and dropped leading edge, as well as more powerful Bristol Olympus engines.

The first Vulcan B1s entered service in 1956 with No. 230 Operational Conversion Unit at RAF Waddington. The aircraft had a crew of five people: two pilots, a navigator, a radar operator and an electronic warfare operator and had a bomb bay initially intended for two atomic bombs of the Yellow Sun Mk 1 type and later for the WE177. The Vulcan started its career as a strategic bomber intended for high-altitude operations.

Four years after the Vulcan B1 work began on an improved B2 design with more powerful engines, modified wing, electronic jamming equipment and inflight refuelling capability. The increased performance offered by the Vulcan B2 made it ideal for modification to carry the Blue Steel nuclear stand-off bomb. This weapon allowed the aircraft to launch its attack from outside the immediate missile defences of a target and thereby extended the effectiveness of the Royal Air Force’s airborne deterrent. 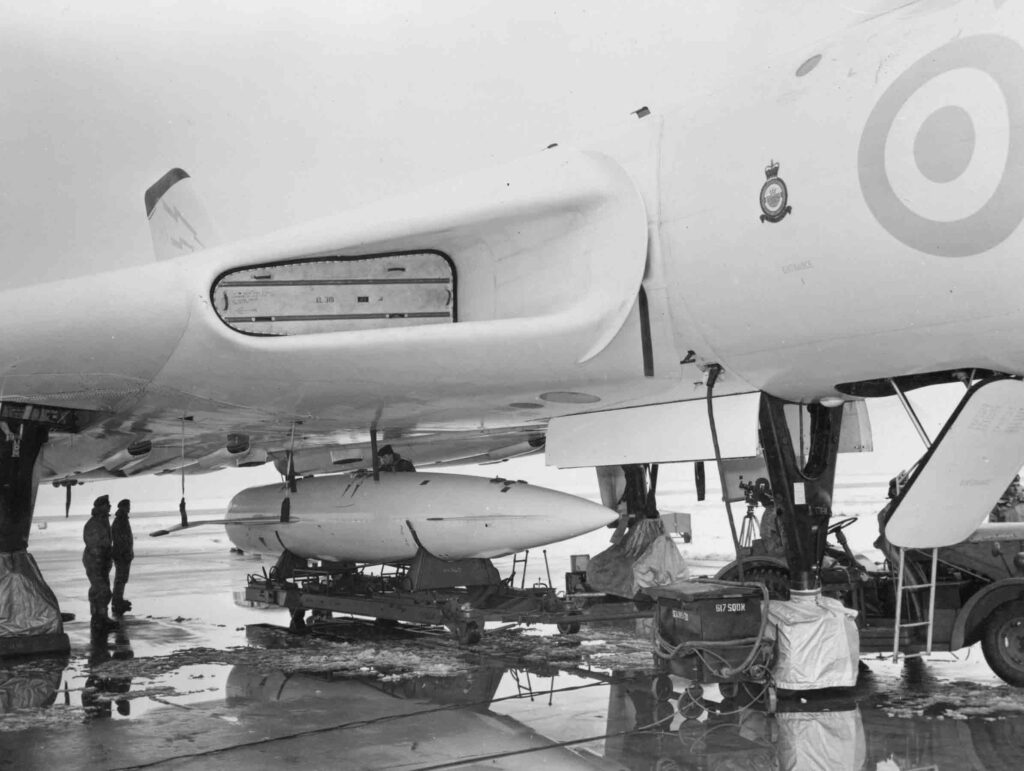 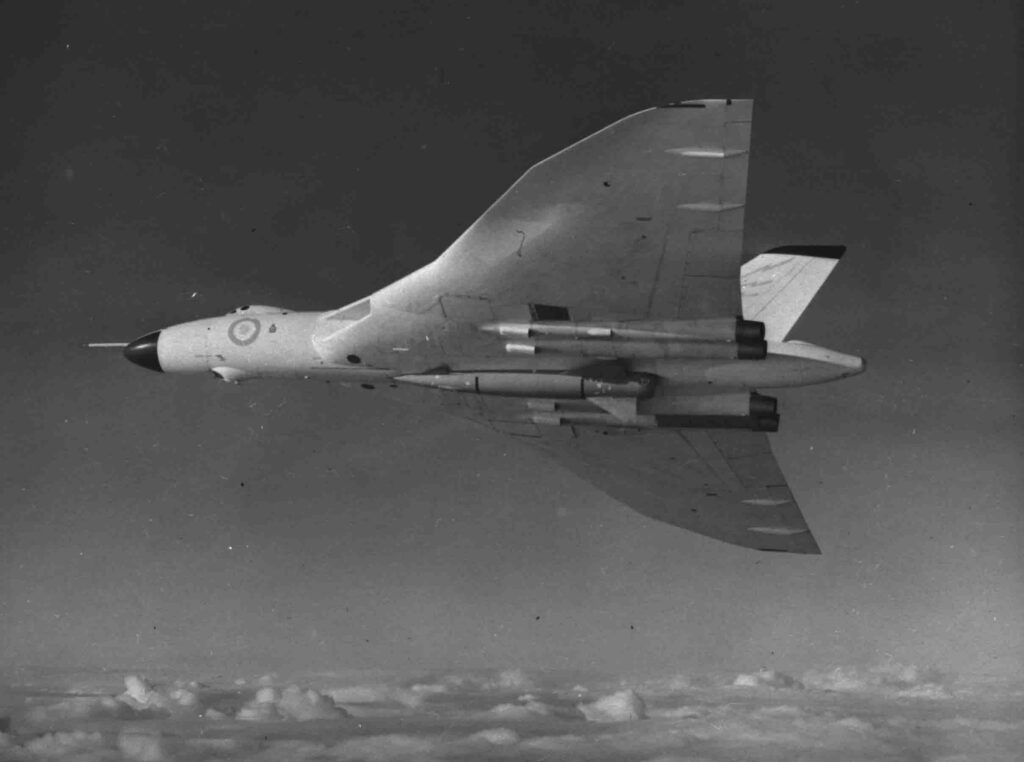 By 1966 Soviet missile defences had become so effective that, despite the improvements of the B2, Vulcans switched from high-to-low-level penetration. In 1970 the decision was taken to withdraw them from the nuclear deterrent in 1970 in favour of the Polaris ballistic missile system which could be fired underwater by the Royal Navy.

As a result, Vulcans switched to the conventional bomber role in support of NATO ground forces in Europe. In this capacity the Vulcan remained in service throughout the 1970s while awaiting the arrival of the Panavia Tornado. When the Falkland Conflict erupted in 1982, the Vulcans were on the verge of being taken out of service. Realising that it was the only bomber capable of bombing the occupied Falkland Islands from the nearest British air base, the Vulcans were readied for combat. Later this year, we will launch a couple of more blog posts to commemorate the 40th anniversary of the Falklands. 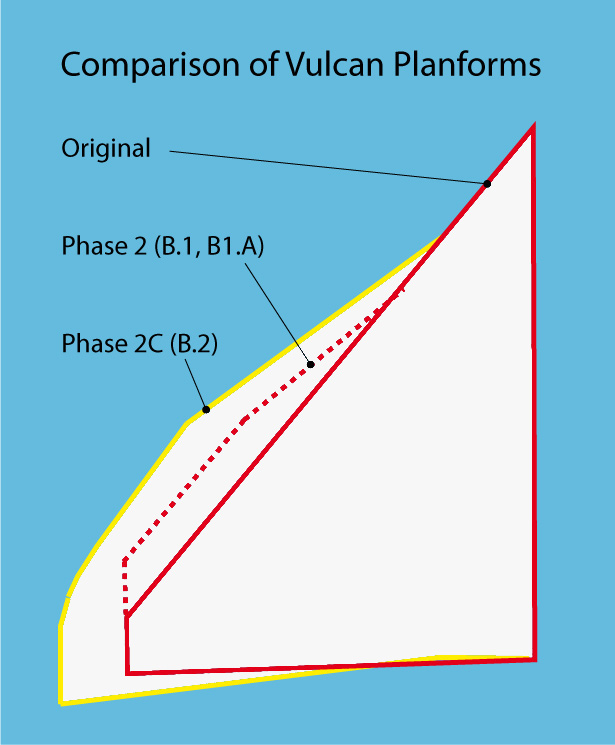 Today the entries opened for our Vulcan Challenge 2022. Choose your distance and soar your way to 100km, 250km or 500km. Standard entry starts at £20.00 and Armed Forces Entry from £15.00. And when you are next at the Museum, make sure you have a closer look at the magnificent design of the Avro Vulcan.