The RAF Museum has two Avro Vulcans in the collection and you can visit them both! Why not clock up a couple of kilometres by visiting the RAF Museum Midlands or RAF Museum London.

How to visit our Museums

For more information about visiting one of our sites please click below, you. You can pre-book your arrival time online before you visit.

You can book a tour at both our sites that walk you through the fascinating cold war history that our Vulcan Bombers played a part in.

A unique insight into the history of the Cold War and the RAF Museum’s Cold War exhibition. Explore the immense threat posed to world peace and security during this significant period of the 20th century.  View our unique display including the V Bombers; the Vulcan, Victor and Valiant.

The tour will explain different highlights of the ideologies of both sides, the social history of the era, the technological achievements which evolved from the competition between East and West and the eventual dissolution of the Warsaw Pact resulting in the world we live in today.

Discover the Avro Vulcan B2 on a ground tour, exploring its significance in the Cold War and how it came to symbolise the last defence against nuclear winter in a time of great uncertainty. Then get up close to other significant Cold War aircraft, including the BAC Lightning F6, the McDonnell Douglas Phantom FGR2 and the English Electric Canberra PR3, and hear fascinating real-life stories of people who flew the aircraft.

This tour gives you the chance to step behind the barriers, explore the Vulcan and other aircraft from the ground, and encounter our Cold War collections like never before. These tours take place on Tuesdays, Wednesdays, Thursdays and Fridays at 11.00am and 2.00pm.

Ticket holders will have the chance to explore two of the Cold War’s most iconic aircraft; the Avro Vulcan B2. and the McDonnell Douglas Phantom FGR2, which between them tell a story of uncertainty and tension that loomed over the world for decades. You will gain special access to both these mighty warriors, and allow you to climb in to and take a seat in the cockpit of the Vulcan and the pilot’s seat of the Phantom. This is a rare opportunity to experience what it was like to fly these great aircraft. Please see the terms and conditions before booking, restrictions apply.

More about our Vulcans 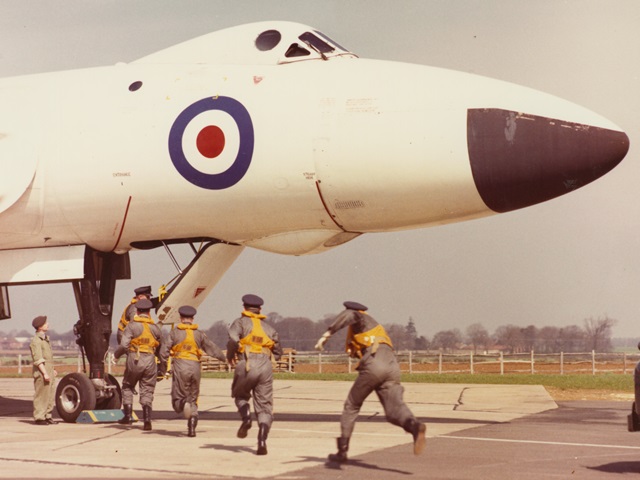 The Vulcan was the second of the Royal Air Force’s ‘V bombers’ and like the Valiant and Victor provided part of Great Britain’s nuclear deterrent force for fifteen years. The prototype B1 first flew on 30 August 1952; four years later work began on an improved B2 design. The B2 made it possible to carry the Blue Steel nuclear stand-off bomb. In 1970, following their withdrawal from the nuclear deterrent, Vulcans switched to the conventional bomber role in support of NATO forces in Europe. The Vulcan’s range could be greatly increased by in-flight refuelling which was used to such good effect in the long-range attacks on the Falkland Islands from Ascension Island in 1982. The last Vulcans retired from operational service in 1984.