In May 2020, The National Museum of the Royal Navy, the National Army Museum and the Royal Air Force Museum joined forces to host a free online festival, bringing to life the stories of those who helped deliver Victory in Europe.

The jam-packed programme included films created in Lockdown, live debates and stories from our archives. We have kept it all live, so you can continue to enjoy all the wonderful videos created.

Full Programme of Events for the Virtual VE Day 75 Festival

Vying for Victory: Britain’s Army, Navy and Air Force in Myth and Memory 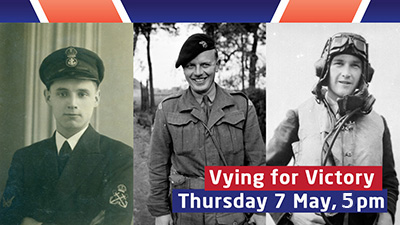 Now, 75 years after Victory in Europe, how do we recognise the contribution of the separate branches of the armed forces on the Road to Victory? Should we view it as anything but a joint operation?

Author and historian James Holland joins lead curators from the National Museum of the Royal Navy, the National Army Museum and the Royal Air Force Museum to explore the highs and lows in the evolution of this unique working relationship.

And, as the modern media continues to draw on wartime experiences and expressions, they will assess how each of the services has cemented its own contribution in myth, tradition and popular culture today.

Sign up to the Crowdcast live Q&A by clicking here

In May 1945, the Second World War in Europe came to an end with the unconditional surrender of all German forces. 8 May was declared a national holiday – Victory in Europe Day – and celebrations swept the country. 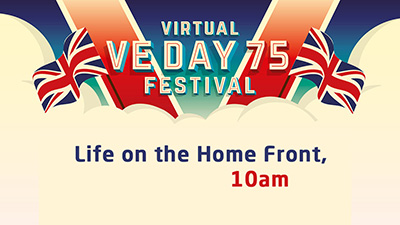 Find out what life was like on the Home Front as the Second World War drew to a close, our Living History groups have brought it to life in a series of short films.

• In the News, Spring ’45! What were you hearing over the radio 75 years ago?
• Digging for Victory and rationing of food during the war, what could you eat?
• Upcycling and repairing clothes were necessary during the war, you had to Make Do and Mend.
• 1940s Hair and Make-up Tutorial
• All night celebrations and street parties, find out what it would have been like on VE Day 75 years ago
• Get inspiration for your celebration from the National Museum of the Royal Navy Collection

11.00am: Tune in to the BBC for National Commemorations, including a two minute’s silence. 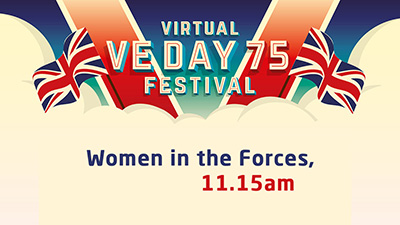 Women served in the three services during the Second World War. Listen to their reflections and discover what their work involved. These women have their stories brought to life by our Living History Groups. 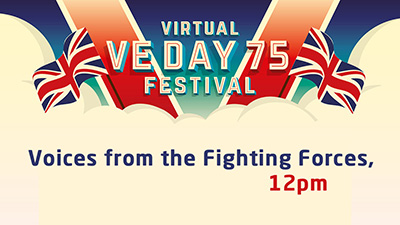 What was it like to survive the Battle of Britain, what did a soldier carry on his back, and who signaled across the world that war had ended in Europe? Stories from the Frontline!

• Life as a Pilot: Still a long way to go
• Pack your bag– discover the uniform and kit soldiers used in the Second World War?
• Forgotten Fighter – the story of a soldier who served in the Far East
• Homecoming Hero – the story of a VC winner’s war
• HMS Victory signals Victory in Europe
• HMS Alliance – Learn about what is like to be under attack, under the sea! With the ‘Action Stations’ video providing an insight into the extraordinary experience of Second World War Submarineers.
• Peter Stevens, a Jewish Hidden Hero. Told by Joshua Levine for the RAF Museum – supported by the Roman Abramovich and Chelsea FC Foundation. 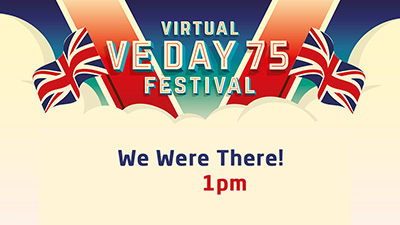 Hear accounts and stories from veterans of the Second World War.
• Army Commandos: Interview with Army Veteran Stan Scott
• Jewish Hidden Hero: Meet Lawrence ‘Benny’ Goodman
• Working in the Ops Room: Katherine Du Plat
• Spreading the news of Peace: Meet Dorrie Thomas, as she reflects on her experience as a Telegraphist in the Women’s Royal Navy Service sending news of peace in Europe to members of the British Naval Fleet. 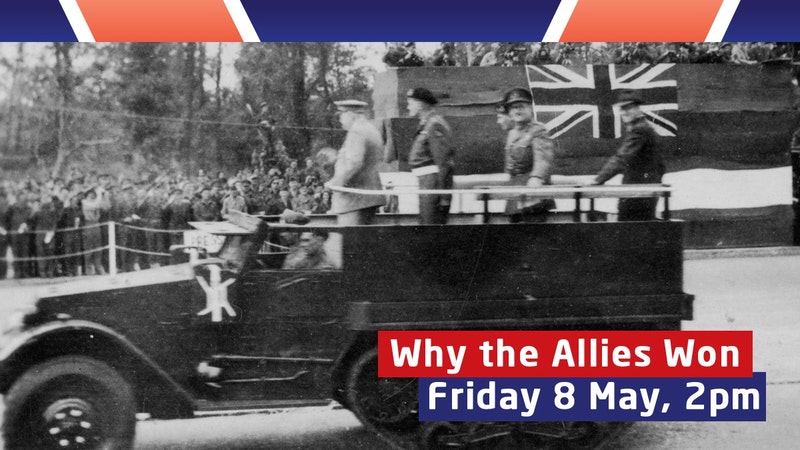 Renowned historian James Holland and National Army Museum curator Dr Peter Johnson discuss the events that brought the Second World War in Europe to an end in 1945 in this live webinar.

Please register for the webinar. Registration will require an email address but no password.

The Announcement of Victory, 2.45pm
Tune in again to the BBC to watch Sir Winston Churchill’s famous victory speech. 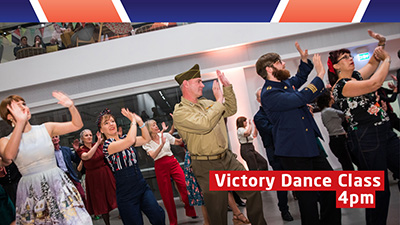 Swing Dance UK will teach you to Jitterbug and Jive from the safety of your own home in this live beginner’s class. 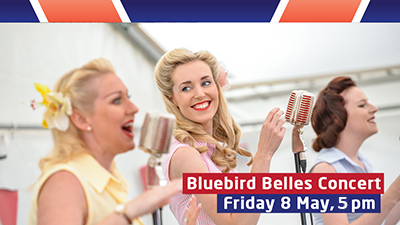 Round off your Bank Holiday celebrations with a concert from 40s trio The Bluebird Belles. Sing along to some iconic tunes and practice your newly learnt dance moves.

We’ll Meet Again
Join in with the National Museum of the Royal Navy staff and volunteers as they sing from around the country. 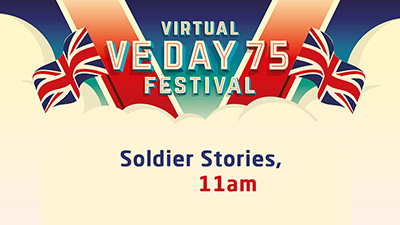 Enjoy our instalment of today’s videos as we continue to explore what life was like on the front line.
• Pack Your Bag part two– discover the weapons and kit soldiers used in the Second World War. This video continues on from yesterday’s instalment.
• Special Operations Executive: Behind Enemy Lines. This video follows yesterday’s exciting tale of a new recruit.
• The RAF Regiment – archive film from the RAF Film Productions (with thanks to the IWM Film Archive)
• Special Operations Executive: Tools of the trade. Discover the kit a member of the SOE used in the field 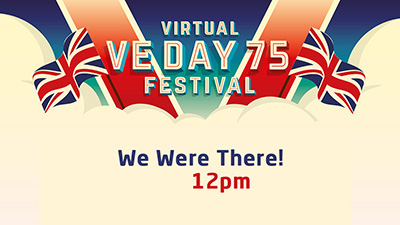 Hear accounts and stories from veterans of the Second World War.
• Old and the Bold: Interview with Norman Mitchell
• Meet Roy Finch and hear about being shot down and bailing out of the Wellington bomber over the sea
• Squadron Leader Sandy Johnstone remembers 602 Squadron 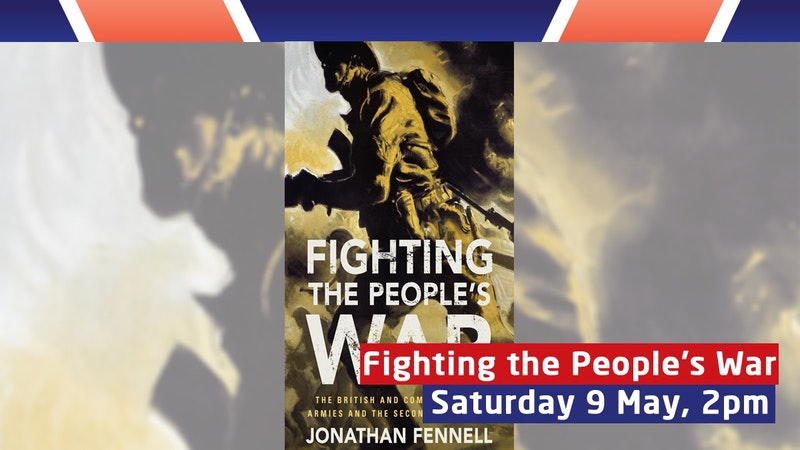 In this live webinar, Dr Jonathan Fennell discusses the history of the British and Commonwealth armies in the Second World War.

He will show how fractures on the home front had profound implications for the performance of the British and Commonwealth armies. Last month, Dr Fennell was awarded the prestigious Templer Medal Book Prize for Fighting the People’s War: The British Commonwealth Armies and the Second World War.

Please register here. Registration will require an email address but not a password.

Vying for Victory
Catch up on Thursday Night’s live Q&A with James Holland and historians from each of the force’s museums, debunking the myths to reveal the lesser known stories of how the Second World War was won.