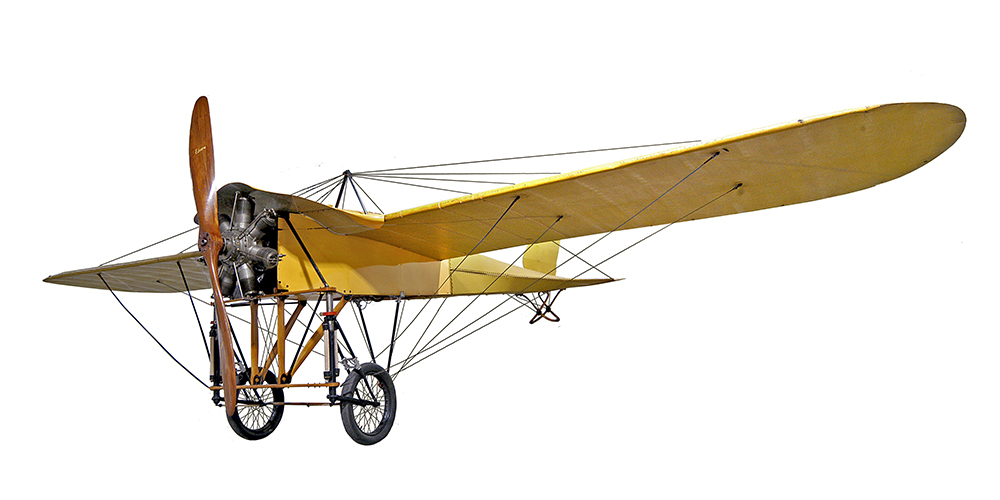 The early history of this striking yellow painted aircraft is obscure, as it has no authenticated history before 1936, when it was acquired from crated storage at Le Havre in France for preservation by vintage vehicle and aircraft collector Richard Nash for his International Horseless Carriage Corporation. When discovered, the oil tank was still half-full.

Although for many years the aircraft was claimed to be the 1911 Gordon Bennett Cup racer, this is not the case. That machine was earlier and differed considerably in appearance. This example may actually have been built by Louis Blériot, famous for making the first cross-Channel flight, during his summer holidays circa September 1911.

Originally built as a single-seat racing aircraft, it was unofficially timed at 130kph (81mph) and could be the Bleriot shown at the Paris Aero Show in December 1911. By the outbreak of the Great War in August 1914 it was in store at Le Havre until discovered by Nash, who quickly restored it, only to crash it at Brooklands in June 1936. He rebuilt the aircraft again between 1938 and 1939 and then, in 1953, sold it to the Royal Aeronautical Society along with other aircraft now in the RAF Museum collection, such as the Caudron G3, Fokker DVII, Sopwith Camel and Blériot XI. All these aircraft were formally purchased by the Ministry of Defence from the Royal Aeronautical Society in 1992 following many years on loan and are now on display at Hendon.

The aircraft underwent further restoration by the Royal Air Force in 1963, and again by the RAF Museum at Henlow in 1967 and at Cardington circa 1974.